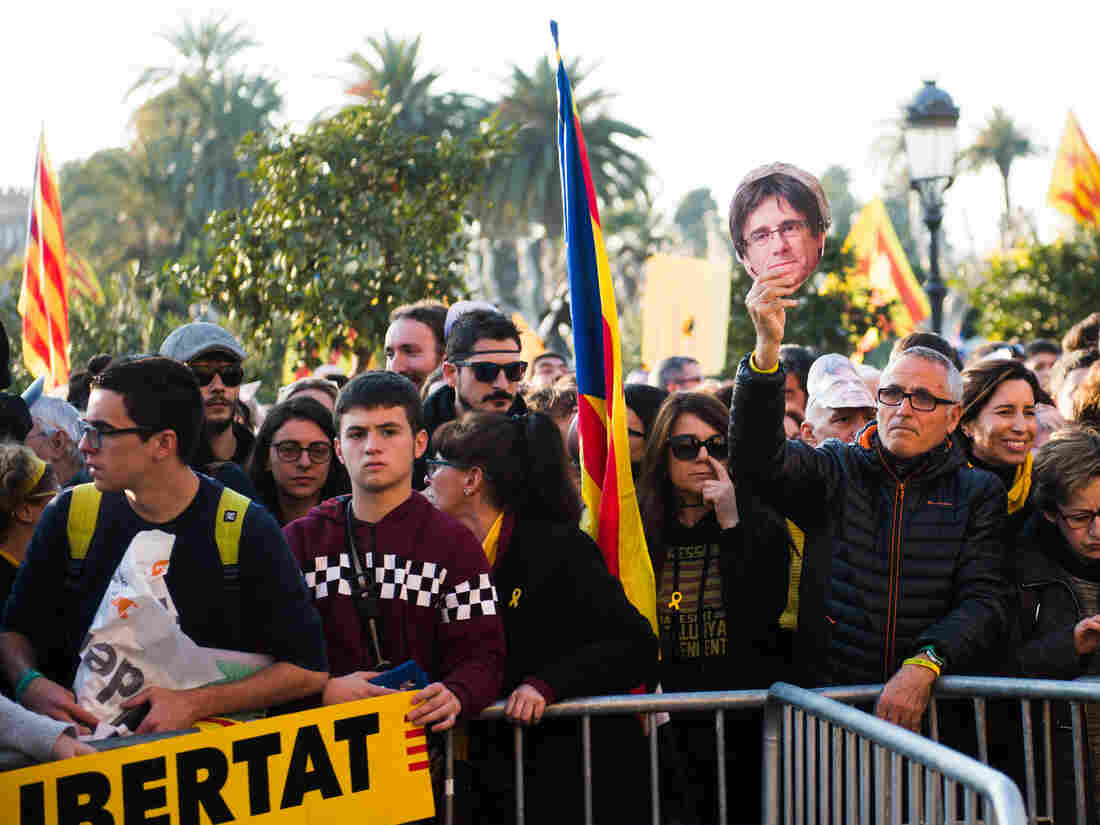 Demonstrators support former Catalan President Carles Puigdemont in front of the regional parliament in Barcelona on Tuesday. Puigdemont, who fled to Belgium to avoid arrest for leading a secession bid, is facing possible charges of rebellion, sedition and misuse of public funds and faces arrest if he returns from Brussels. Alex Caparros/Getty Images hide caption 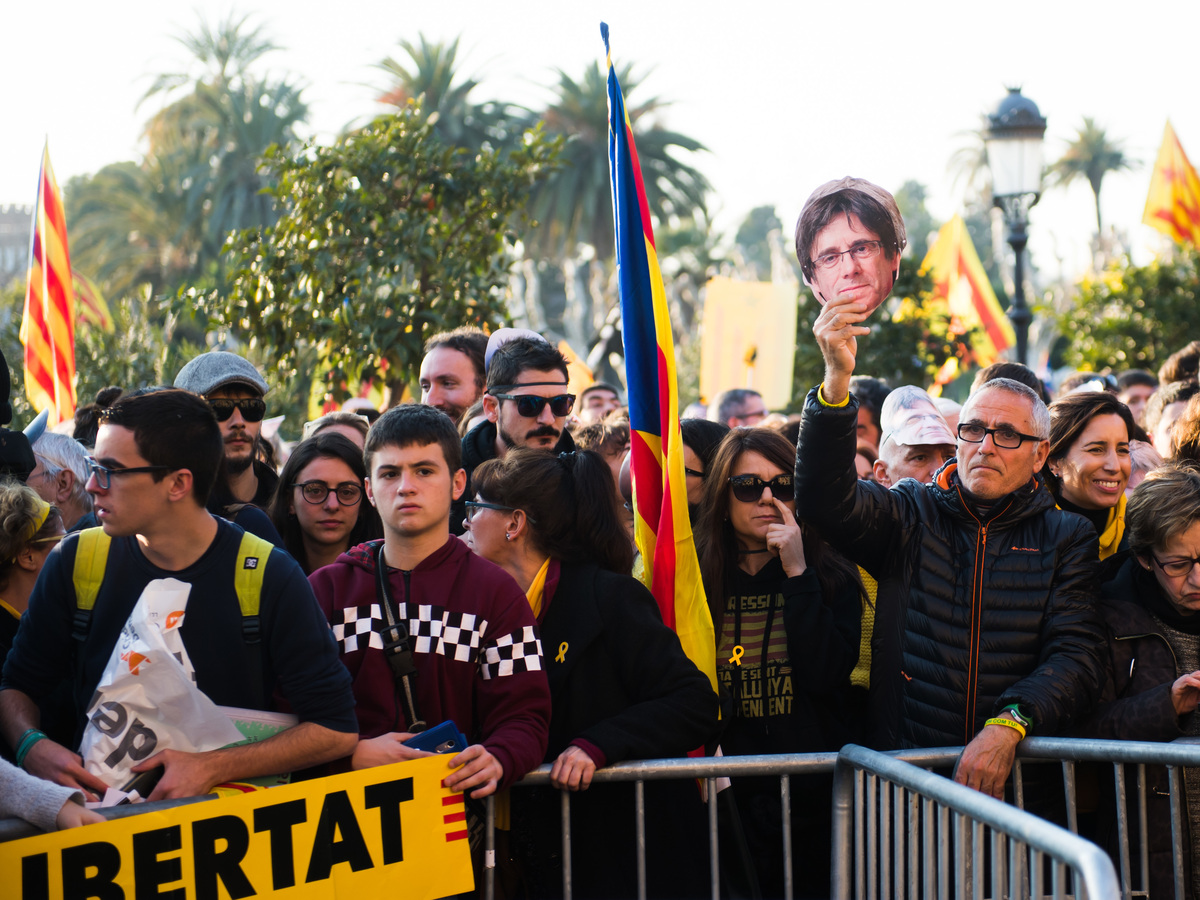 Demonstrators support former Catalan President Carles Puigdemont in front of the regional parliament in Barcelona on Tuesday. Puigdemont, who fled to Belgium to avoid arrest for leading a secession bid, is facing possible charges of rebellion, sedition and misuse of public funds and faces arrest if he returns from Brussels.

Four months after Catalonia's independence referendum triggered a cascade of political events, independentistas are once again rallying outside the Catalan parliament in Barcelona. Catalonia's deposed president is still on the run. And Spain's renegade northeast region may be heading for fresh elections — yet again.

Friday is Groundhog Day in the U.S., but the place where things really feel like the 1993 Bill Murray film about being stuck in a time warp is Catalonia. History is repeating itself with yet another standoff between separatists, who want to break away and form a new country in Europe, and the Spanish central government, determined to stop them.

This is Europe's most serious secessionist challenge, and it shows no signs of going away.

In Spain, Confusion And Uncertainty About Catalonia's Future

Carles Puigdemont, the ex-president, went into exile in Belgium. Several of his aides went to jail.

Tourism slumped. Thousands of companies moved their bases — at least on paper — out of Catalonia and into neighboring regions deemed more stable.

After all that, Catalans voted in December for virtually the same regional parliament: A slim majority, 70 of 135 seats, was voted in for separatist parties. A quirky electoral system means rural votes count more than urban ones. But opinion polls show Catalans are roughly divided 50-50 on the question of independence.

Still, the parliament election was a blow to Spanish Prime Minister Mariano Rajoy, who had hoped the unrest and economic repercussions would convince Catalans not to back the separatists again.

The Spanish government says Spain is indivisible, and a breakup of the country would be unconstitutional. It also points to the polls: There's no mandate for secession, Spain and its European allies say. 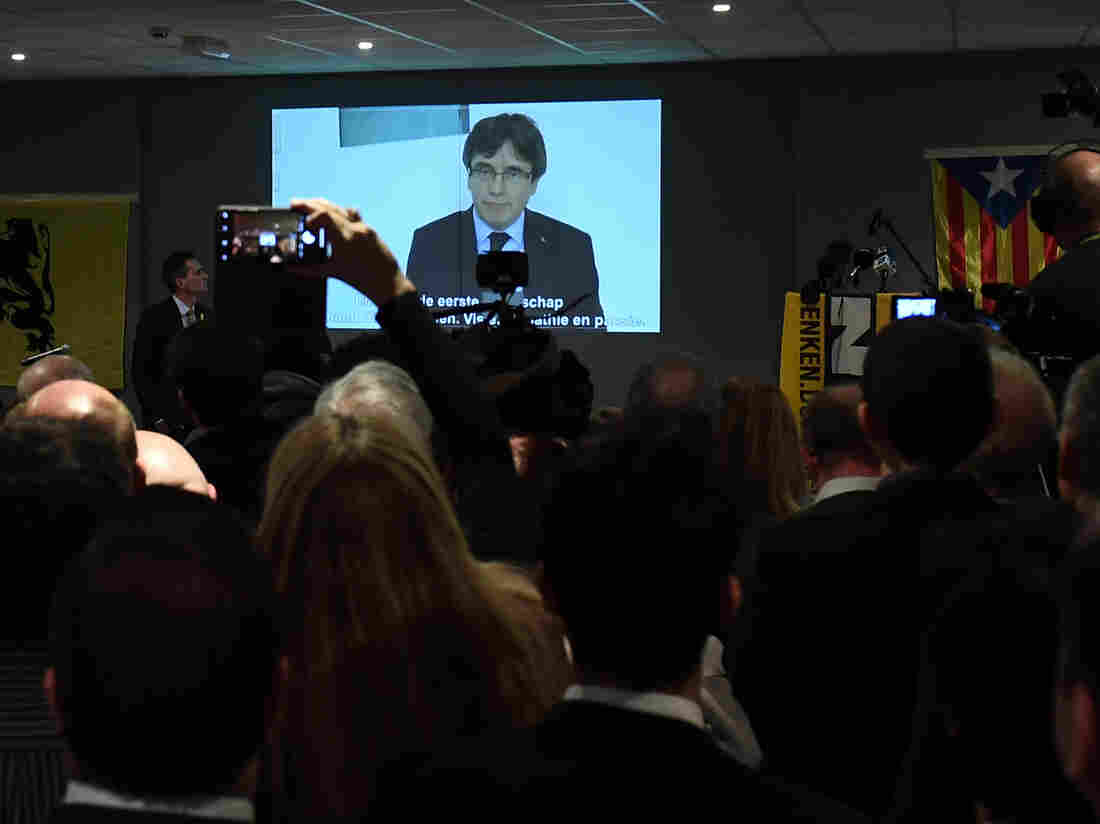 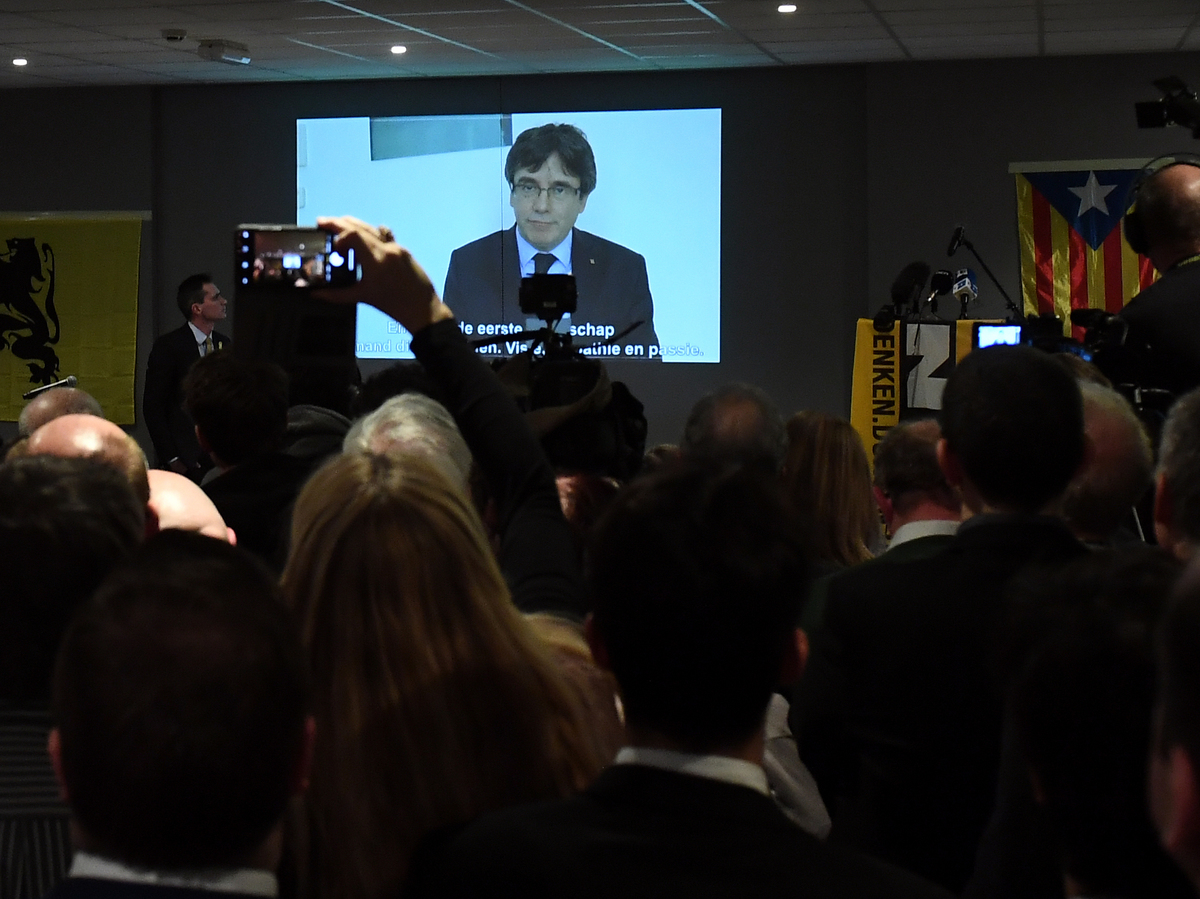 People watch a live broadcast of a speech on Tuesday by ousted Catalan separatist leader Carles Puigdemont from Leuven, Belgium.

"Spain is very good at prolonging these absurd situations, because no politician will back down and admit to a flawed strategy. 'Groundhog Day' is not a bad name for it," says Gabriela Bustelo, a Madrid-based political columnist and author. "The public is completely exasperated. I think Brussels and the wider world are beginning to see it as a circus."

The crisis has elicited alarm and consternation both in and outside Spain, but some in Spain are responding with parody and games. "Video games can be a powerful communication tool — and so can humor. Together they help us survive the sad, difficult, demoralizing reality of politics," says Jordi Calvís, a Catalan illustrator who helped create "PuigdeKong," a new Android version of the old Donkey Kong video game. Its name plays off Puigdemont's.

Catalonia has its own language and culture, and has long sought autonomy from the rest of Spain. It's Spain's richest region, and when the country's economic crisis hit a decade ago, many Catalans began to resent their tax money subsidizing poorer parts of Spain. Separatist politics moved from the fringe to the mainstream.

This week, pro-independence demonstrators were back on the streets after the separatist-led Catalan parliament postponed a vote to re-elect Puigdemont as regional president — a move that could have prompted further crackdowns from Madrid. But without an elected leader, the region could be forced to repeat regional elections. It would be the third round of polls in 2 1/2 years.

Puigdemont, 55, a former journalist and mayor who took office in 2015, organized the Oct. 1 referendum and declared independence afterward — and was swiftly fired by the Spanish government. Facing 30 years in prison for rebellion, he fled to Belgium and recently proposed governing from there — by Skype.

With a warrant out for his arrest, Puigdemont would likely be detained immediately if he were to set foot back in Spain. But the Catalan parliament has named him its sole candidate for Catalan president. So he has proposed doing his job remotely. "New technologies" in videoconferencing would allow him to govern from exile, he says.

"Between being president or becoming a prisoner, I'd rather be president," Puigdemont told a Catalan news agency last month.

Most legal experts say the idea of ruling by Skype is impractical, if not illegal.

"It's almost ridiculous. One thing is to govern a multinational company from a headquarters somewhere. But in the case of states or regions, it's necessary to be present," says Xavier Arbós Marín, a constitutional law expert who teaches at the University of Barcelona and other institutions in Catalonia. "Even the internal rules of the Catalan parliament require a candidate to speak before the chamber, to present his or her program for governing. It implies that he has to physically be here."

Spain's Constitutional Court ruled last Saturday that candidates must be present to take office. It also ruled that Puigdemont, as a fugitive from Spanish law, would require a judge's permission to attend any session of Catalonia's parliament.

Last weekend, speculation grew about his arrest after a separatist lawmaker said Puigdemont would ask a Spanish judge for free passage home to Barcelona to attend parliament on Tuesday, when lawmakers planned to vote on his candidacy. (The vote was later postponed.) Police checked cars this week along the French border. A special government task force was created to search for Puigdemont, Spain's interior minister said. 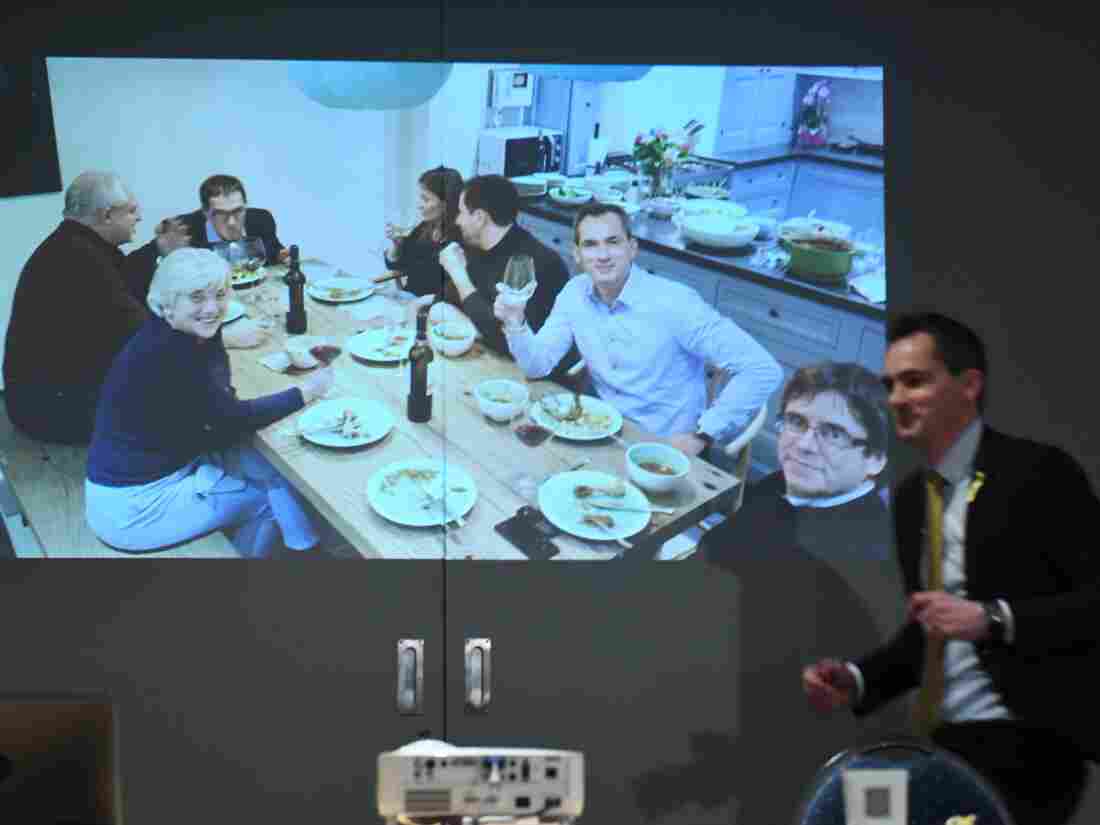 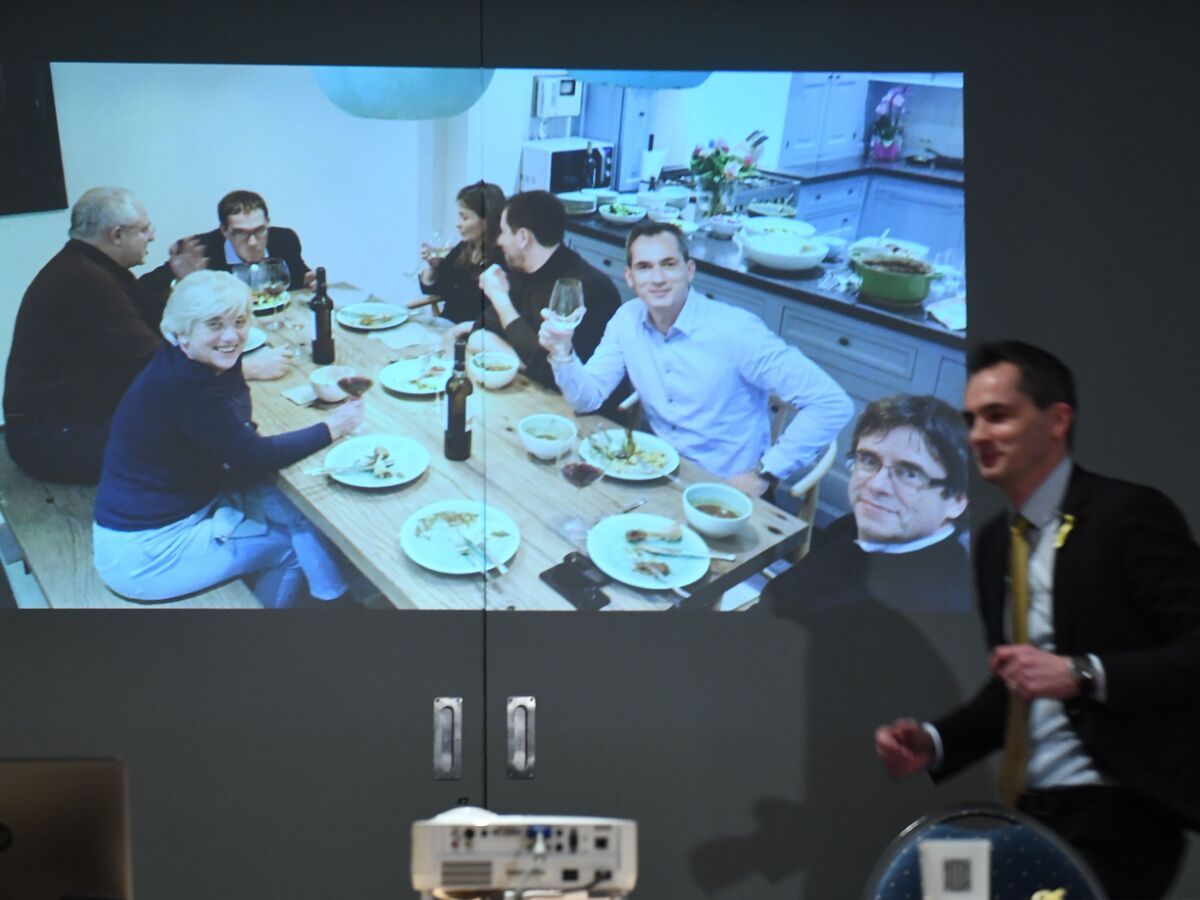 A screen shows ousted Catalan separatist leader Carles Puigdemont (right) eating a meal with members of the Belgian Flemish nationalist party New Flemish Alliance on Tuesday in Leuven. Puigdemont has befriended nationalists seeking independence for the region of Flanders since he fled to Belgium in October.

"Even though there are many country roads and he could enter by boat, helicopter, or ultralight, we are working to prevent this from happening," Interior Minister Juan Ignacio Zoido told a local TV station last week. "And we're trying to stop him from entering, even in the trunk of a car."

The suggestion prompted a meme on Twitter: photos of wigs with Puigdemont's signature floppy hairstyle sticking out of the trunks of cars on Spanish highways.

'People have decided to start laughing'

"PuigdeKong," in the Google Play app store, allows players to "help the elected candidate reach the Parliament and save him from the clutches of the undemocractic monkey and his henchmen."

The identity of the undemocratic monkey depends on what side you're on.

Calvís, the Catalan illustrator who helped create PuigdeKong and designed the game's pixelated, old-school graphics, sympathizes with the independence movement and wanted to make a political statement through the game. He thinks Spain has not grown much since the dictatorship of Francisco Franco, who died in 1975. Catalan language and culture were repressed under Franco.

"I see a Spain that's still far from advancing in rights and public freedoms that are common in other 21st century democracies," Calvís says.

You don't have to be a Puigdemont supporter to think such games are funny or valuable in dealing with political fatigue, says Bustelo, the Madrid analyst who supports Catalan unity with Spain.

"We have the sense that what's happening makes no sense. So people have decided to start laughing," she says. "Tabarnia is the most serious of the jokes."

Tabarnia — its name a mix of two Catalan cities, Tarragona and Barcelona — is a fictional region along Catalonia's coast, created by unionists as a parody of the Catalan independence movement. Tabarnia wants to secede from Catalonia and unite with Spain. It has its own mock flag, newspaper and president.

Although its creation preceded Catalonia's current turmoil, Tabarnia has gained new attention and popularity of late. The lines between parody and real life blurred in recent weeks, when, according to the BBC, "Tabarnia's representatives sent a petition to the Spanish parliament demanding the right to 'be a new autonomous region within Spain and independent from Catalonia.' To date, it has received more than 275,000 signatures."

Even without the threat of a fake breakaway region, more instability seems certain in the weeks to come, as Catalonia remains stuck repeating its demonstrations, elections and confrontations with Madrid.