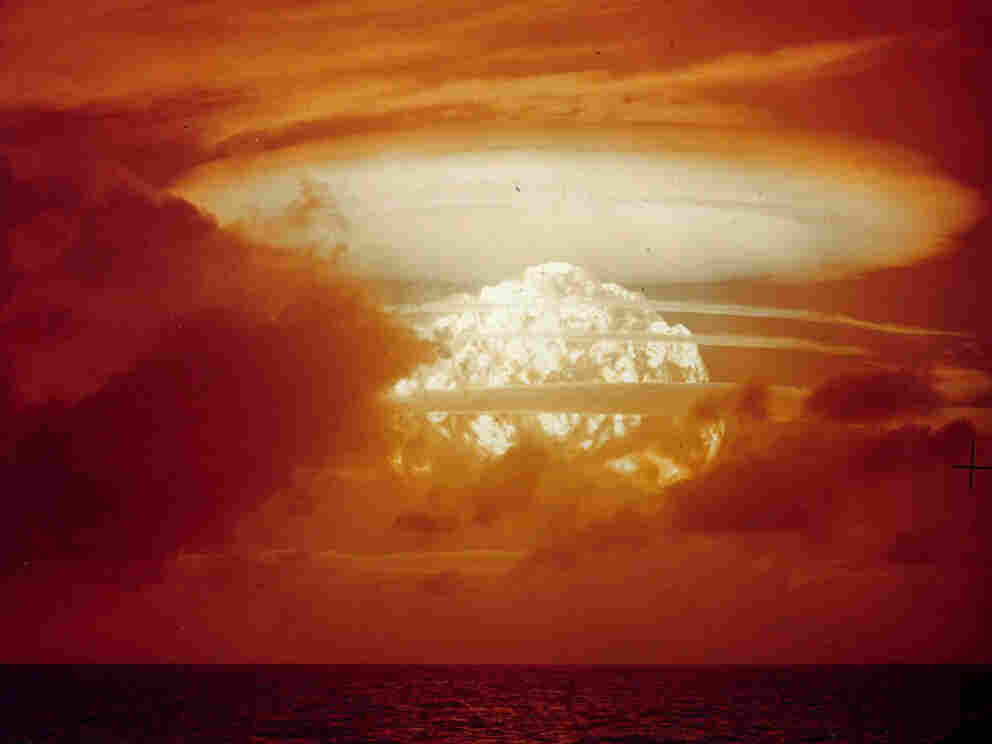 On March 1, 1954, the U.S. conducted its largest nuclear test with a yield of 15 megatons. The new Russian weapon would be up to 100 megatons, according to reports. USAF Lookout Moutain Laboratory hide caption 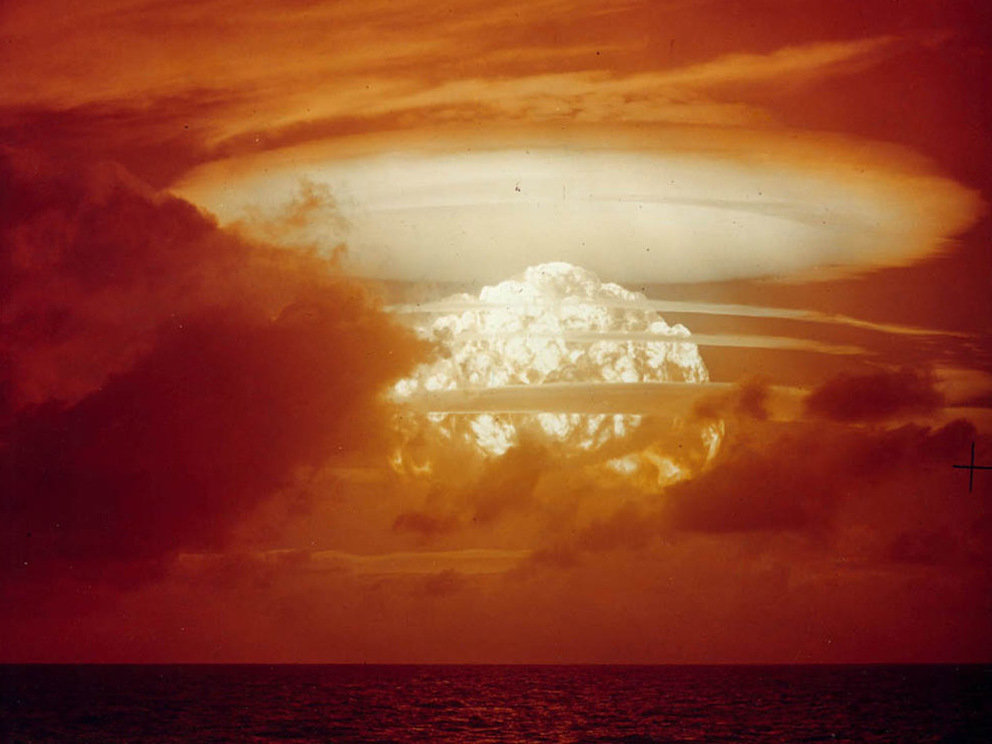 On March 1, 1954, the U.S. conducted its largest nuclear test with a yield of 15 megatons. The new Russian weapon would be up to 100 megatons, according to reports.

The Trump administration released a report on the state of America's nuclear weaponry on Friday. The assessment, known as a Nuclear Posture Review, mainly concerns U.S. nukes and missiles.

But buried in the plan is a mention of a mysterious Russian weapon called "Status-6." On paper, at least, Status-6 appears to be a kind of doomsday device. The report refers to it as "a new intercontinental, nuclear-armed, nuclear-powered, undersea autonomous torpedo."

"The radius of total or near-total destruction is the size of a pretty large metropolitan area, actually," says Edward Geist, a Russia specialist at the Rand Corp. who has spent time looking at the weapon. "It's difficult to imagine in normal terms."

Status-6 made its first public appearance in 2015, while Russian President Vladimir Putin was visiting with his generals in the city of Sochi.

Russia state television reported on the visit. The camera shows Putin seated at a long table. Then it cuts to a shot over one of the general's shoulders. He is looking at what appears to be a drawing of a new nuclear weapon called the Oceanic Multipurpose System Status-6. 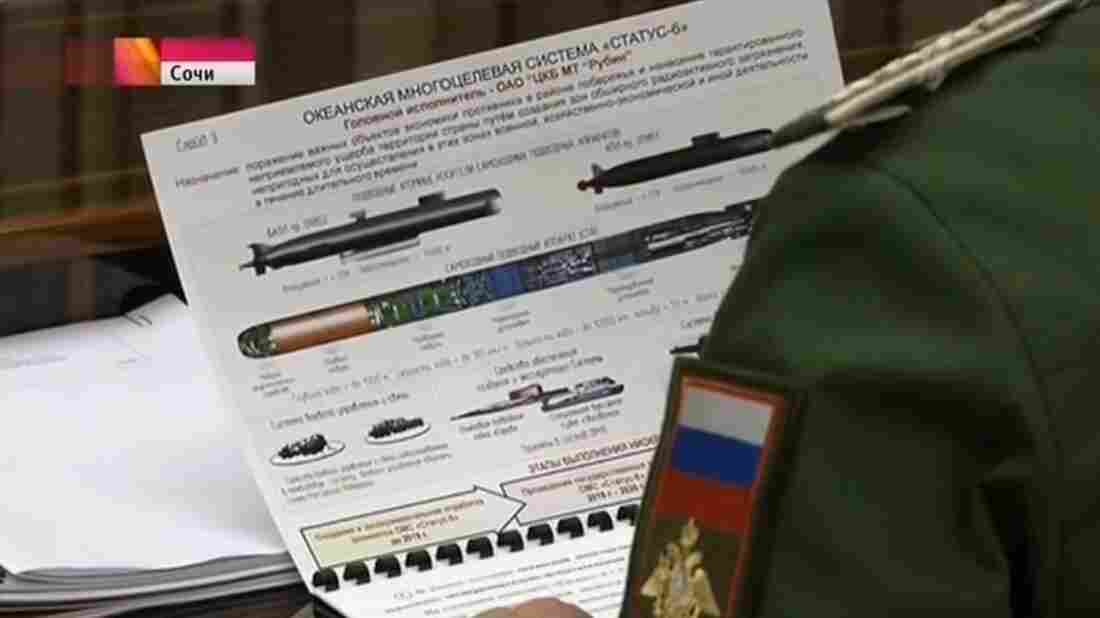 Status-6 made its first public appearance in 2015, on a television broadcast of Russian President Vladimir Putin meeting with his generals in the city of Sochi. Youtube hide caption 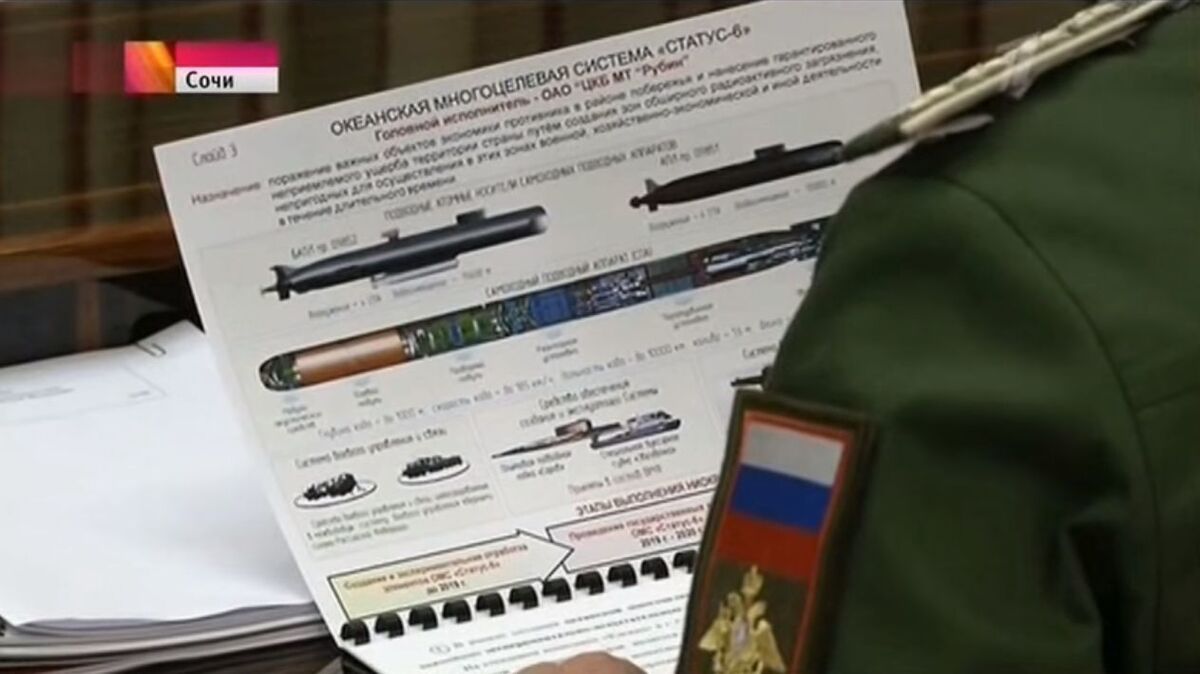 Status-6 made its first public appearance in 2015, on a television broadcast of Russian President Vladimir Putin meeting with his generals in the city of Sochi.

Status-6 looks like a giant torpedo about a third the length of a big Russian submarine. According to the slide, it is nuclear-powered, meaning it can roam for months and possibly even years beneath the ocean without surfacing. Its payload is a nuclear warhead "many tens of megatons in yield," Geist says.

Status-6 would launch from beneath a Russian submarine. It would shoot at a depth too deep to be intercepted and travel for thousands of miles. Upon reaching its target along the U.S. coastline, it would detonate, swallowing up whatever city happened to be nearby.

"The only possible U.S. targets are large port cities," says Mark Schneider, a senior analyst with the National Institute for Public Policy, wrote in an e-mail. "The detonation of Status-6 in any of them would essentially wipe out their population into the far suburbs."

Status-6 would probably be used as a "third-strike" weapon of last resort. If Russia fell under attack from the U.S. and couldn't retaliate with its missiles, it might trigger Status-6: a doomsday machine. Or at least a doomsday-ish machine.

Then again, the whole thing might be a fake.

"The drawing of this drone looks more like an enlarged drawing of a smaller torpedo," says Podvig. In other words, it looks as if the Russians may have just taken some torpedo clip art, blown it up to terrifying size and then broadcast it on state television.

"It's a way to get our attention," says Geist.

Geist says that the "leak" of Status-6 was deliberate. Russia worries that U.S. missile defenses might be able to shoot down its missiles in a nuclear war. By showing a plan for Status-6, Russia is warning the U.S. that if it continues to build such defensive systems, then Russia will find another way to strike, with a missile that can't be intercepted.

"My read of the whole Status-6 slide leak is that the Russians were trying to send us a message," Geist says.

Podvig agrees that the leak of Status-6 is probably just a warning shot. But the fact that it appeared in the Pentagon's newest report on nuclear weapons shows that some war planners are taking the idea seriously.

There may be some politics involved in that decision as well, says Hans Kristensen of the Federation of American Scientists. The Trump administration is pushing hard for upgrades to America's nuclear arsenal. In his State of the Union address, the president called for making the arsenal "so strong and so powerful that it will deter any acts of aggression by any other nation or anyone else."

Citing Status-6 helps to build the case that upgrades to American nukes are needed, Kristensen says.

For all the rhetoric around Status-6, Podvig and Geist both believe that the program isn't completely made-up. Geist says a long-range underwater drone without a nuclear warhead would be a useful weapon.

"You could use it for tapping our underwater communications cables," he says. "Or simpler, in a war, is just going out and like finding them and cutting them."

Status-6 could also carry conventional munitions, like cruise missiles, and launch them after hiding for months beneath the water.

Podvig has seen photos that he says indicate the Russians are working on some hardware for big underwater drones.

"My best guess is that there is there is a project to design an underwater vehicle with a purpose, unknown at this point," he says. "There is something there."