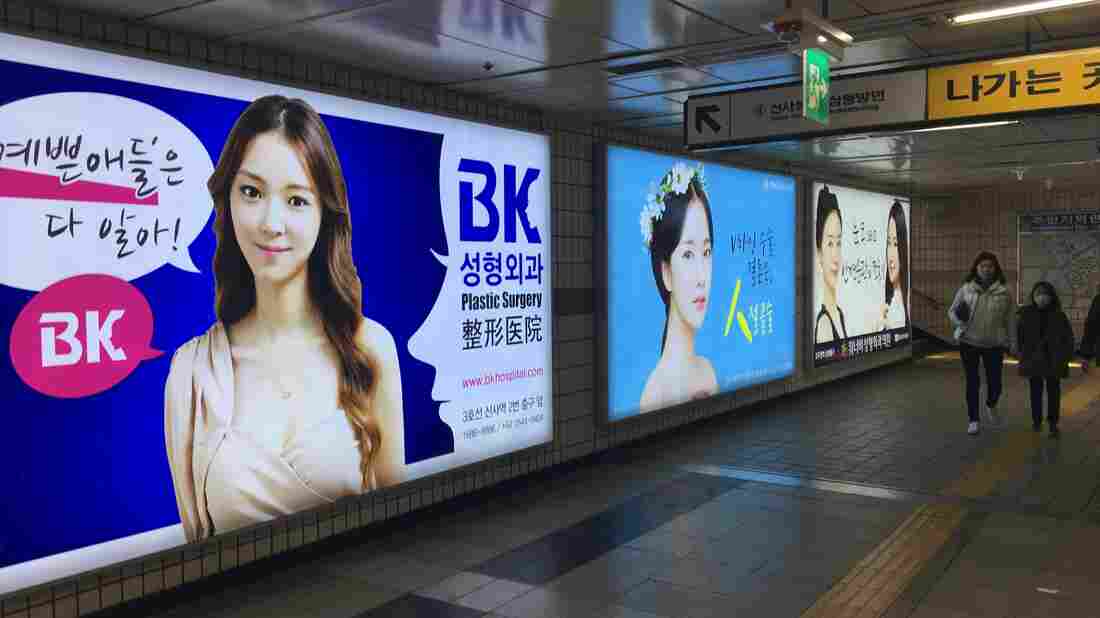 Every ad in the Seoul Metro's Apujeong station is for a plastic surgery clinic. In response to a growing number of complaints from riders, the Seoul Metro announced it will ban advertisements for cosmetic surgery at its stations. Elise Hu/NPR hide caption 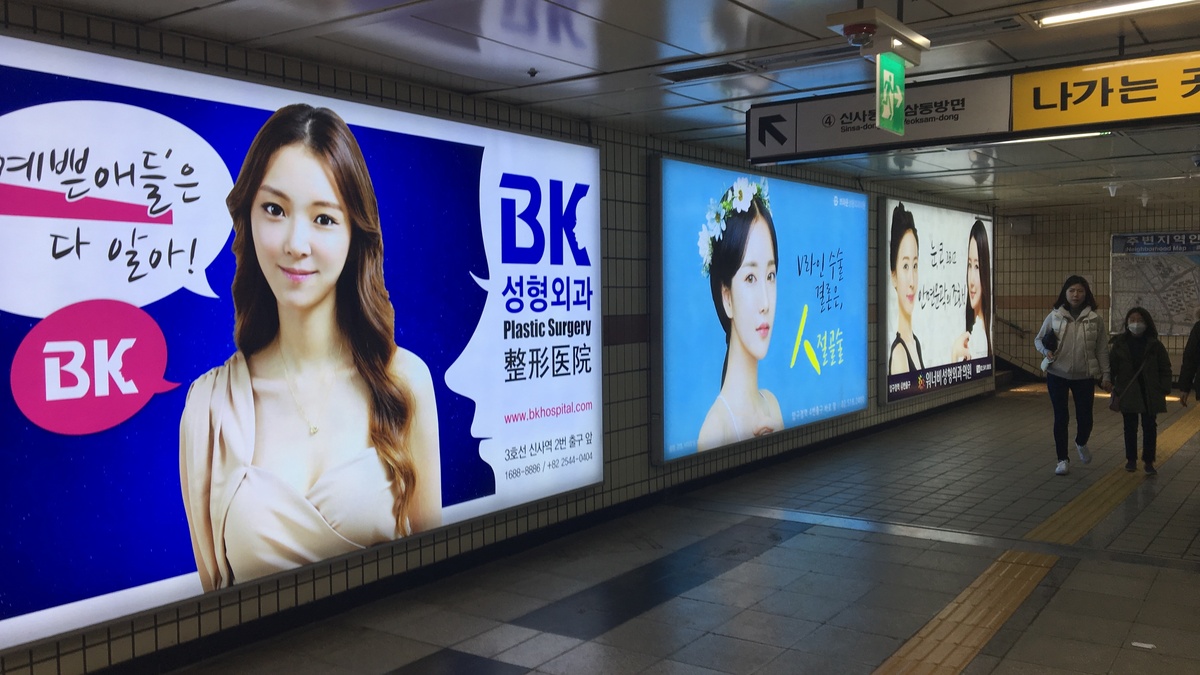 Every ad in the Seoul Metro's Apujeong station is for a plastic surgery clinic. In response to a growing number of complaints from riders, the Seoul Metro announced it will ban advertisements for cosmetic surgery at its stations.

In Gangnam, the upscale Seoul district south of the Han River bisecting the city, one of the area's biggest industries is evident on people's faces: On the streets, patients are wearing nose guards and bandages, fresh from facial fix-ups. High-rises soar with a cosmetic surgery clinic on every floor, and in the subway stations, floor-to-ceiling advertisements feature images of women's uniformly wide-eyed, youthful faces — all with the message that you, too, can look this way if you go to the right clinic.

South Korea has the highest per capita rate of cosmetic surgery in the world, by one key industry estimate. Gallup Korea found about one in three South Korean women between the ages of 19 and 29 said they've gone under the knife, though some counts put the number even higher. Most of the surgeries are eyelid procedures and the vast majority of plastic surgery patients are women. 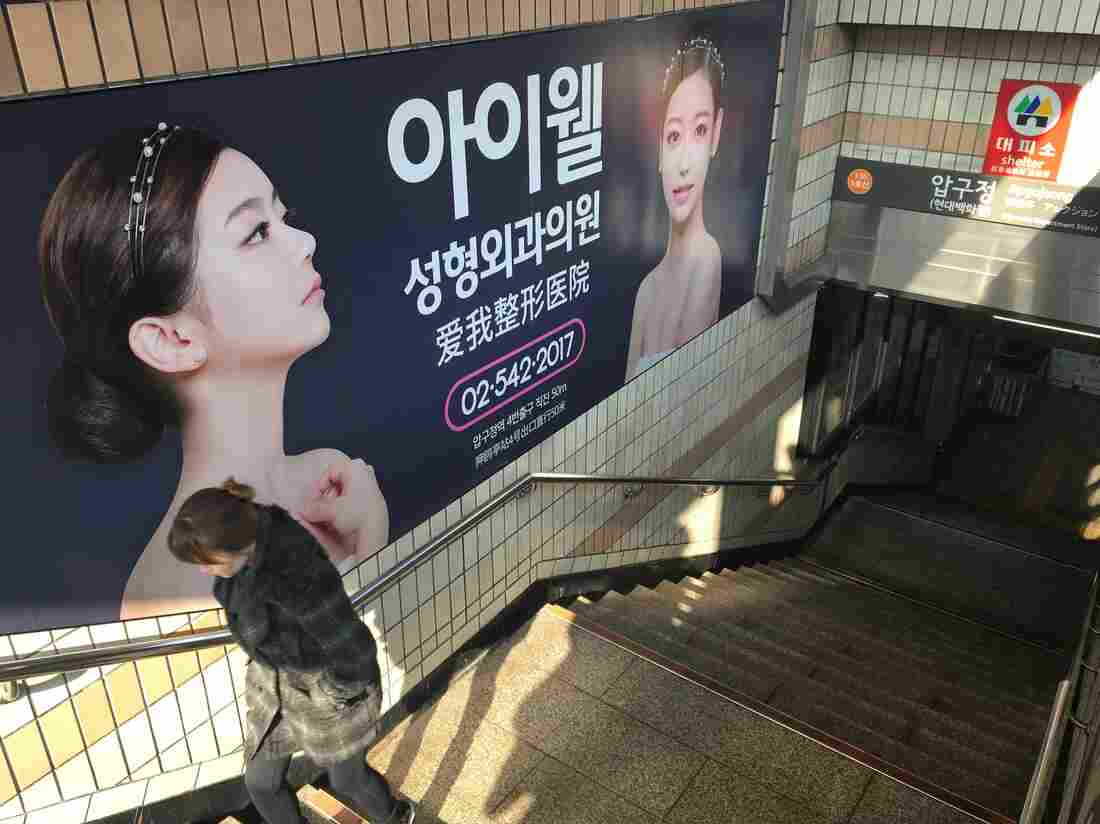 Ads for plastic surgery clinics line both sides of the stairwell going into a subway station in the Gangnam district of Seoul. Elise Hu/NPR hide caption 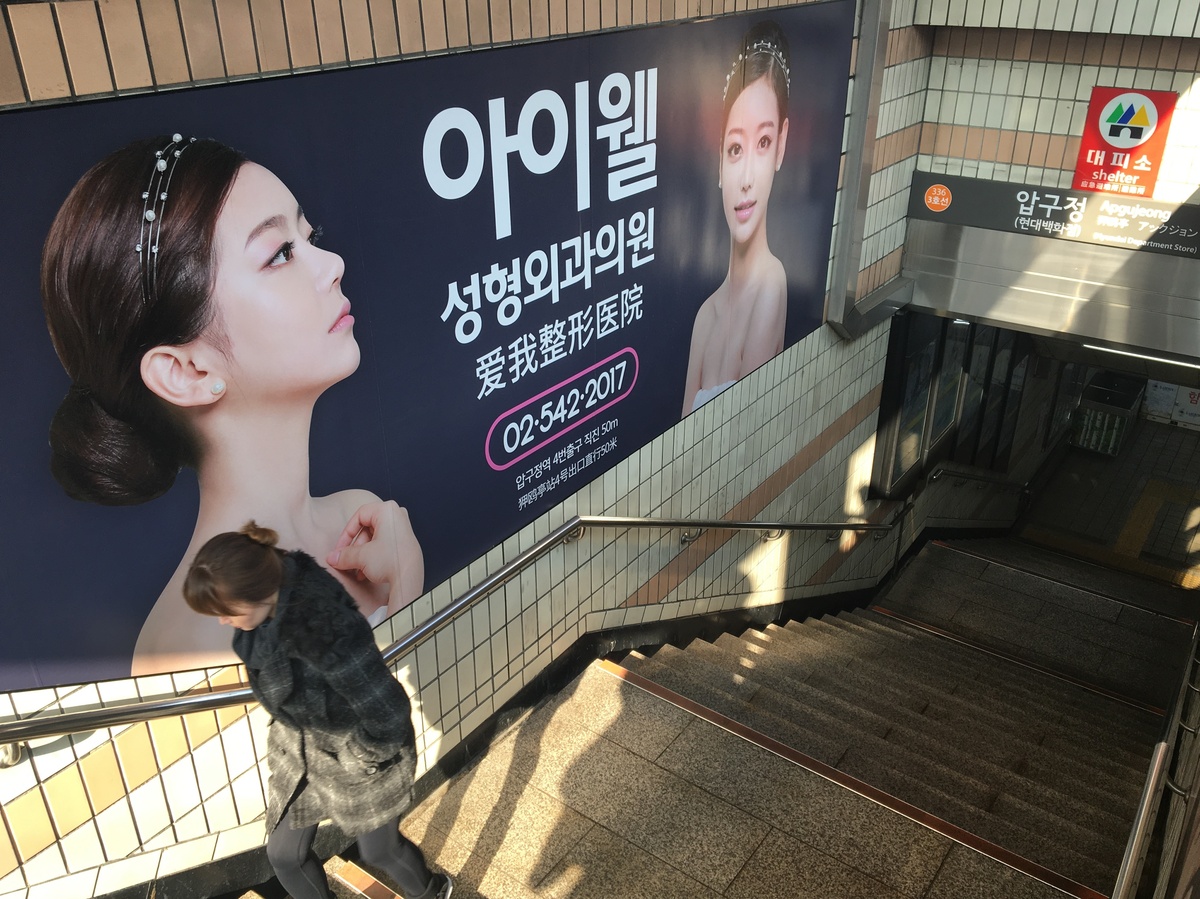 Ads for plastic surgery clinics line both sides of the stairwell going into a subway station in the Gangnam district of Seoul.

Cosmetic surgery "is not even a question, a moral question — is it good, is it bad? It simply is," says Heather Willoughby, a professor of women's and cultural studies at Seoul's Ewha Womans University.

Cosmetic surgery tourism attracts so many people — mostly from Japan and China — that Seoul's Incheon airport at one point considered putting a plastic surgery clinic inside a terminal so travelers wouldn't have to go into the city to finish their procedures. (That proposal was scrapped after opposition from doctors).

But Koreans are starting to question the proliferation of cosmetic procedures. In response to a growing number of complaints from riders, the Seoul Metro, which runs the capital's public bus and subway system, announced in November that it will ban advertisements for plastic surgery at its stations.

In response to an NPR request, a Metro spokesman shared a few of the public complaints it has received:

"Please regulate large ad displays of makeovers through plastic surgeries ... It's unpleasant to see them in public spaces."

"Do more strict screening of ads that excessively promote surgery and aggravate discrimination against women."

Seoul Metro says the number of complaints has ticked up steadily since 2015, prompting it to take action.

But Willoughby says the problem is much broader.

"Much of the ideal [beauty] is industrialized. It's being created by the beauty industry, by K-pop [Korean pop music], by perhaps even the government, in what they're selling to the rest of the world as to the ideal Korean beauty," she says.

Bora Ki, who rushes past cosmetic surgery ads every day, calls them "horrible."

"All of the women look the same," Ki says. "So I think it's not positive."

The sameness she mentions is striking. Willoughby says it reflects the standard beauty ideal prized by Koreans: ivory skin, big, round eyes with the Western-looking double eyelid and a V-line jaw.

"There's just a sense that to conform, to be part of that norm, you have to look a certain way, act a certain way," Willoughby says.

Kim Sook-in, who makes her living as a porcelain artist, doesn't question cosmetic surgery or the prolific ads promoting it.

"It's every woman's desire to become prettier, so I think it's a good thing," Kim says.

Willoughby says Seoul residents — especially younger women and girls — could stand to see fewer reminders about how much looks matter.

"When young girls see this over and over and over, they subconsciously are told they have to be a certain way. So seeing less of it or seeing a greater diversity is a much better and much healthier thing," she says.

These ads are on their way out — but not anytime soon. Because of existing ad buys, the Metro says it doesn't expect to phase out all the subway's gleaming plastic surgery promotions until 2022.