Accessibility links
China Is Placing Underwater Sensors In The Pacific Near Guam : Parallels China has placed one or more acoustic sensors — listening devices — in the Mariana Trench, near the island of Guam, which is home to a major U.S. military base. 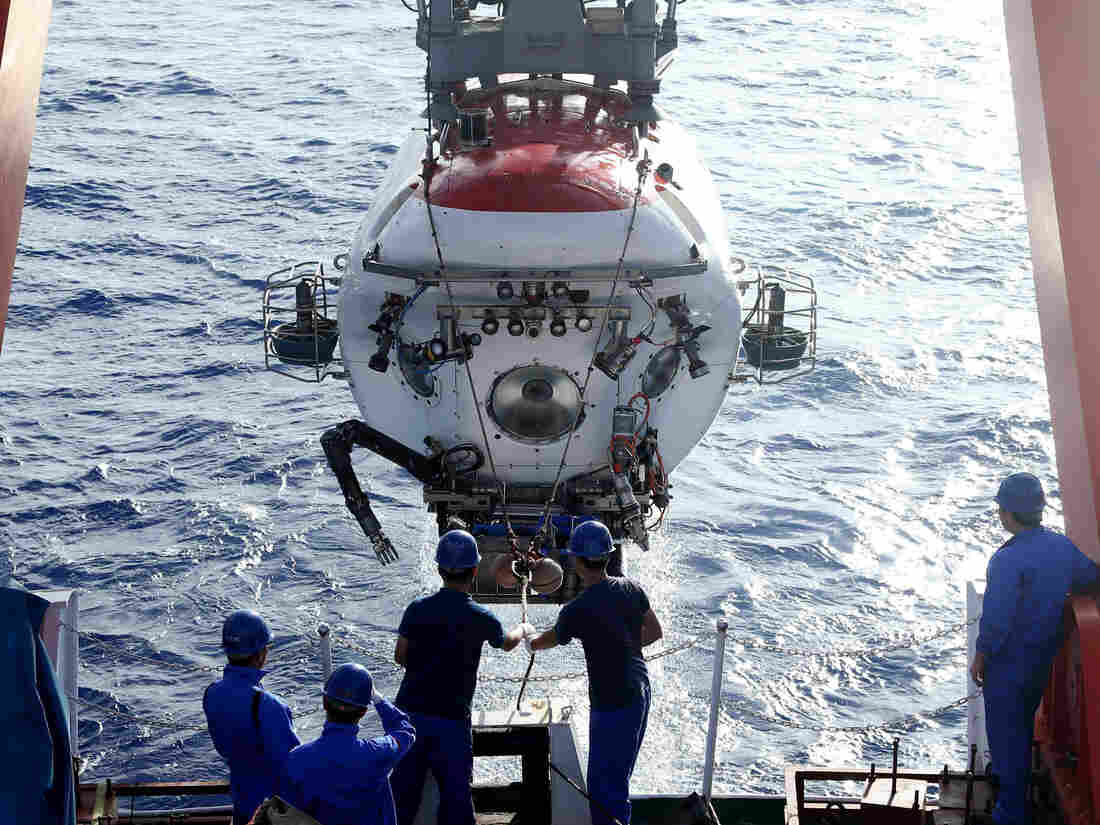 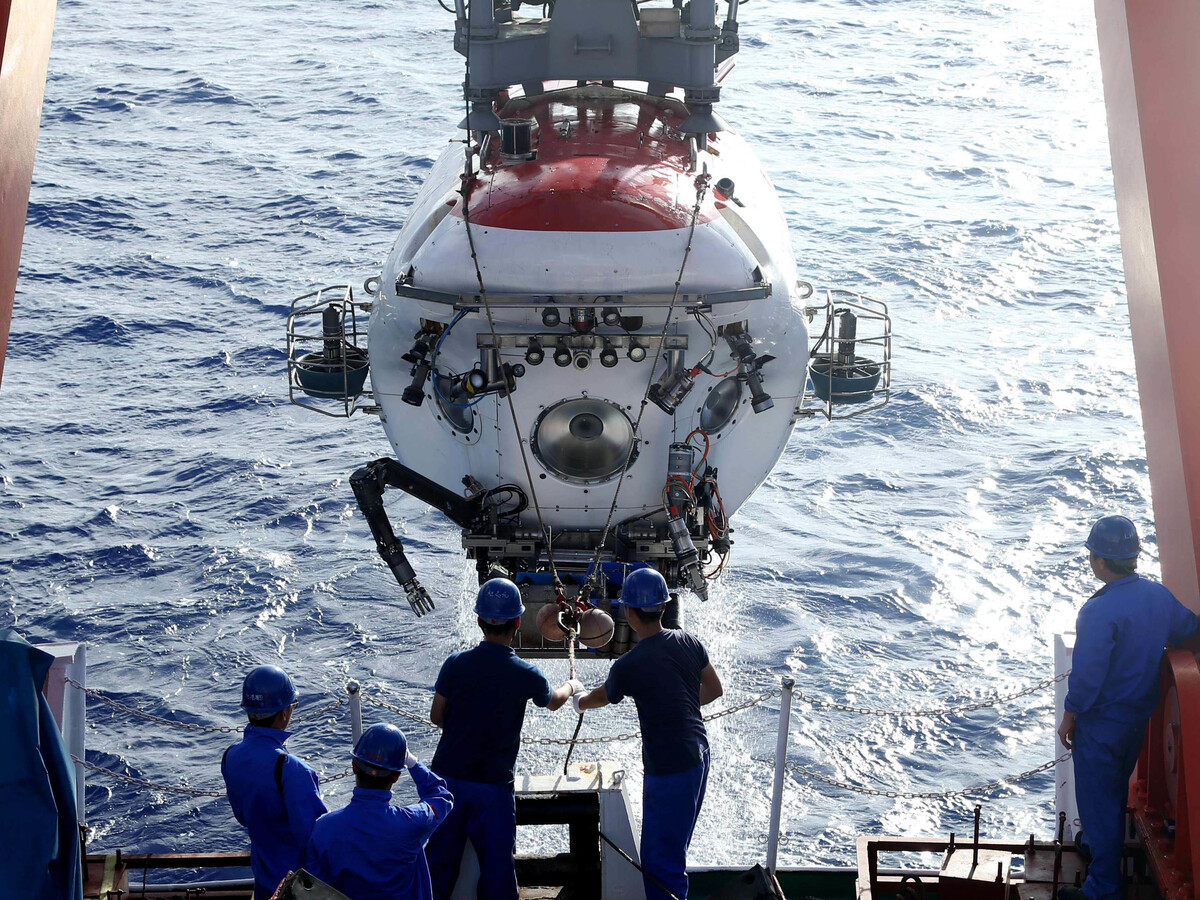 Jiaolong, China's manned submersible, is retrieved after its dive in the Mariana Trench on June 1, 2017, after its 20th dive in the world's deepest known trench since 2012.

China's official People's Daily newspaper reported in December that Chinese scientists had lowered acoustic sensors into the Mariana Trench, at the bottom of the Pacific Ocean.

The listening devices, placed near the U.S. territory of Guam — home to a major U.S. military base in the western Pacific — could be used to study oceans or track submarines. Analysts see the move as a clue to China's strategy toward the Pacific, its neighbors and the U.S. The sensors could help China monitor foreign ships and protect its coastline from attack, while allowing its own warships to roam more freely.

The bottom of the Mariana Trench is nearly 7 miles below the ocean's surface, at the Pacific's deepest point. It's not easy to make a sensor that can withstand the massive pressure that far down.

"This is part of a trend where the Chinese really understand the nature of submarine acoustics and they're going after some pretty high-tech stuff," says Lyle Goldstein, an associate professor in the Strategic Research Department of the U.S. Naval War College.

China began putting acoustic sensors in shallow waters along its coastline about a decade ago, Goldstein explains. But deeper waters tend to be quieter, and putting listening devices there allows them to pick up sounds farther away, and more clearly.

While China's rapid advances in oceanography could benefit industries such as fisheries, they also have clear military applications.

Goldstein says that while the U.S. Navy maintains a big technological advantage over China's, China has been closing the gap. In recent years, it has offset the U.S. advantage in aircraft carriers by developing missiles and warplanes that can hit them.

In China's Drone Seizure And Return, A Strategic Message To U.S.

"But below the surface, the situation has not changed so much," Goldstein says, because of the United States' advantage in submarines, which he describes as the "sharpest arrow in our quiver."

But even there, China has been catching up, devoting considerable resources to anti-submarine planes and ships, underwater sonar and unmanned underwater vehicles, or gliders.

China's submarines, especially its nuclear-armed ones, are concentrated in the South China Sea. It is deeper than the other two seas off China's coast, the East China Sea and the Yellow Sea, and therefore easier for submarines to hide in.

Another reason for putting submarines in the South China Sea, Goldstein points out, is that the U.S. and Japanese navies are deployed mostly in the northern part of the Pacific. And U.S. missile defenses are concentrated in Alaska. So the best way for China to offset the U.S. military advantage is to send its nuclear submarines south.

China sees itself at a strategic disadvantage because of geography.

If the South China Sea is China's backyard — and many Chinese see it that way — then Taiwan, the Philippines and Indonesia are like a chain of islands encircling that yard.

"The island chains are a nightmare for the development of China's maritime forces," observes Zhu Feng, executive director of the China Center for Collaborative Studies of the South China Sea at Nanjing University. "The nightmare is that if our warships and planes want to head for the Pacific, they can be constrained by America's allies on our borders."

In peacetime, Zhu says, this is not a problem. But in wartime, Chinese subs and ships trying to get out of the South China Sea would have to pass through a few narrow channels, which the U.S. could use as choke points.

In recent years, China has expended great effort to stake its territorial claims in the South China Sea. It has built sandy reefs there into fortified islands. But the islands would not be very useful in the event of a conflict with the U.S., Zhu says.

Nor does he think the listening devices or any other technical breakthroughs will help China break out of its encirclement.

"If we want to get past the island chains, we must undermine the U.S.'s military alliances, and that's not possible," he says. "As China rises, Japan, South Korea and Southeast Asian nations are only becoming more reliant on the U.S. for their security."

Zhu is not optimistic that the acoustic sensors can accurately pinpoint the location of increasingly stealthy U.S. subs. At best, Zhu says, the sensors may boost China's naval confidence — and help it learn a little more about U.S. naval movements in China's neighborhood.