Accessibility links
Russia Election: Putin Foe Alexei Navalny, Banned From Running, Keeps Pushing : Parallels The popular 41-year-old lawyer is calling for a boycott of the March 18 presidential election, which he says is rigged. He says Putin's regime is built on making Russians believe nothing can change. 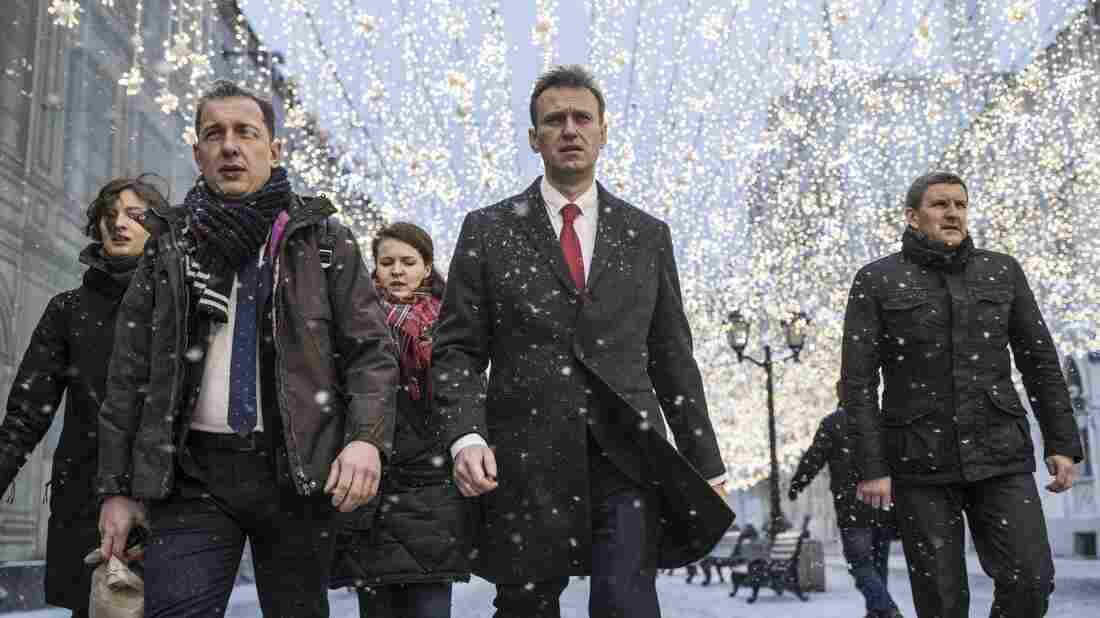 Russian opposition leader Alexei Navalny, center, heads to a meeting of the Russia's Central Election commission in December. Officials formally barred him Alexei Navalny from running for president in the March 18 election, which he says is a predetermined sham. Evgeny Feldman/AP hide caption 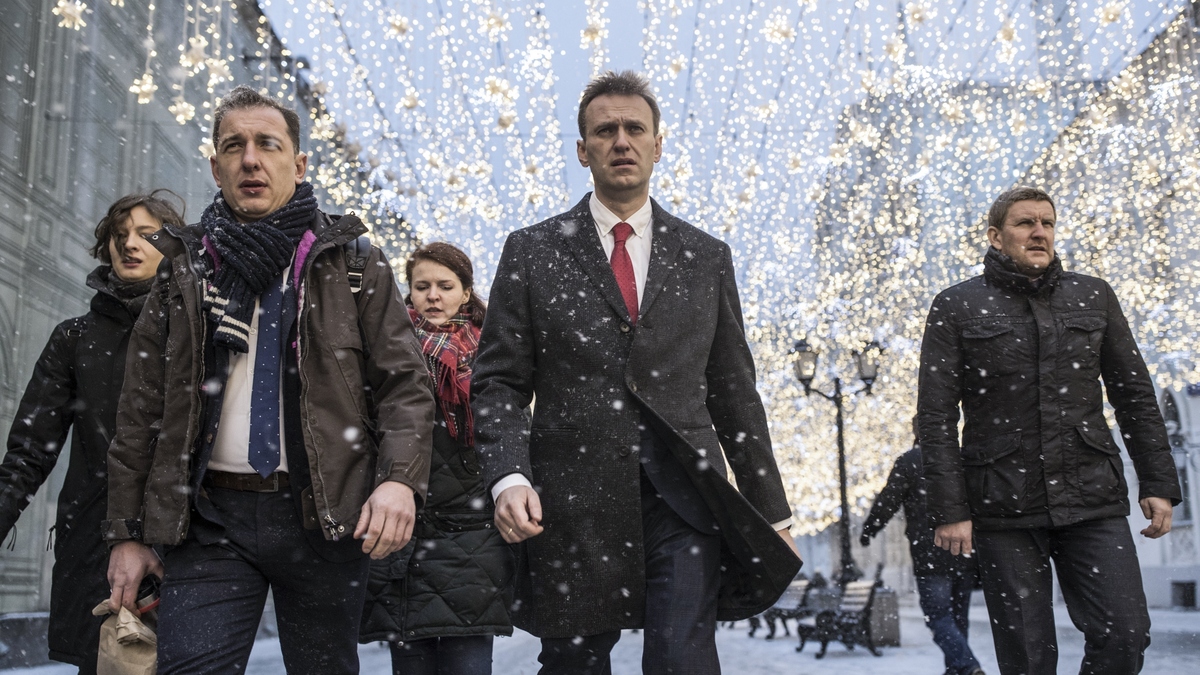 Russian opposition leader Alexei Navalny, center, heads to a meeting of the Russia's Central Election commission in December. Officials formally barred him Alexei Navalny from running for president in the March 18 election, which he says is a predetermined sham.

All that separates Alexei Navalny's office from the outside world is a long hallway and a door — which police have sawed open twice in the past year to search for imaginary bombs.

The Kremlin's most vocal critic runs his nationwide opposition network from a desk strewn with papers in a cramped corner office of his Anti-Corruption Foundation, housed in a nondescript Moscow business center.

"I want to live in a normal country, and refuse to accept any talk about Russia being doomed to being a bad, poor or servile country," Navalny said in an interview with NPR. "I want to live here, and I can't tolerate the injustice that for many people has become routine."

The 41-year-old lawyer, who once tried to foment shareholder revolts at giant state-run companies, has in less than a decade risen to the forefront of Russia's opposition — and provokes such an allergic reaction with President Vladimir Putin that he won't utter Navalny's name in public. Yet after spending a year crisscrossing the country in a quixotic bid to unseat Putin, Navalny was denied registration as a candidate in the March 18 presidential election.

Now Navalny is calling for an election boycott to protest what he calls a predetermined election, in which Putin is pitted against seven pre-approved candidates who have no intention of winning.

"The basis of Putin's regime"

His experience as a lawyer in Russia's courts steered him toward politics, Navalny said, because he realized the only way to guarantee an independent judiciary is by overhauling the country's entire political system.

"I'm definitely not alone, and I'm not some kind of dissident," he said. "If you take any of my anti-corruption investigations or any points from my political platform, I'm sure the majority of Russian citizens would support me — and that's why I wasn't allowed to run."

Navalny said his main challenge isn't so much overcoming apathy as the belief imposed from above that nothing can be changed: "That's the basis of Putin's regime."

Putin is afraid because he knows his legendary 80 percent approval ratings are possible only in a political vacuum where there is no competition, Navalny said. His presidential campaign claims that it signed up more than 200,000 volunteers and opened 81 offices nationwide. 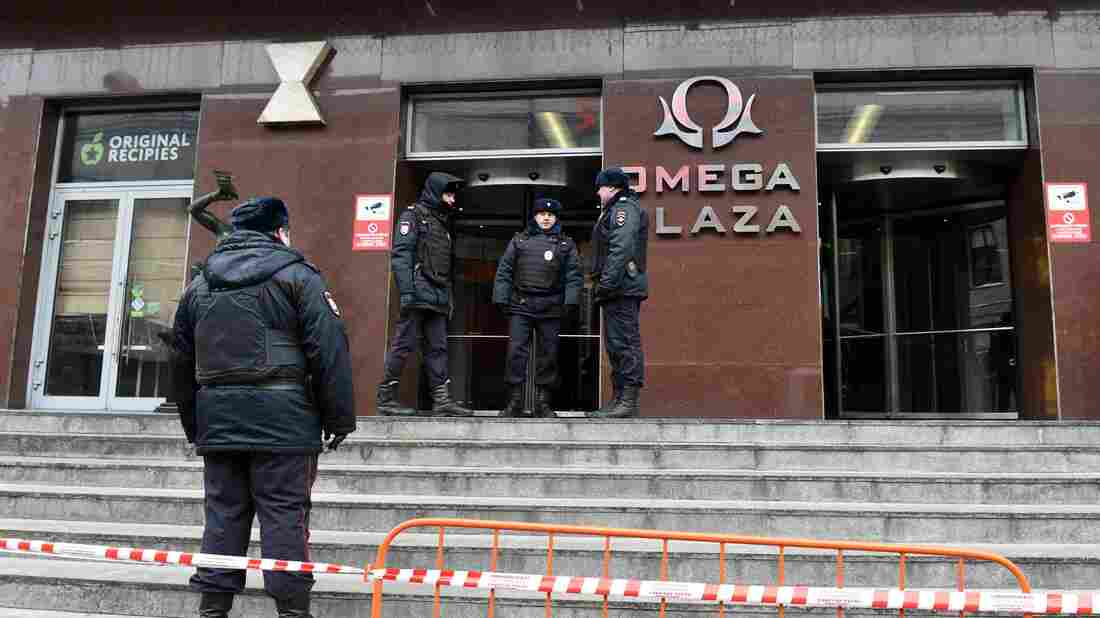 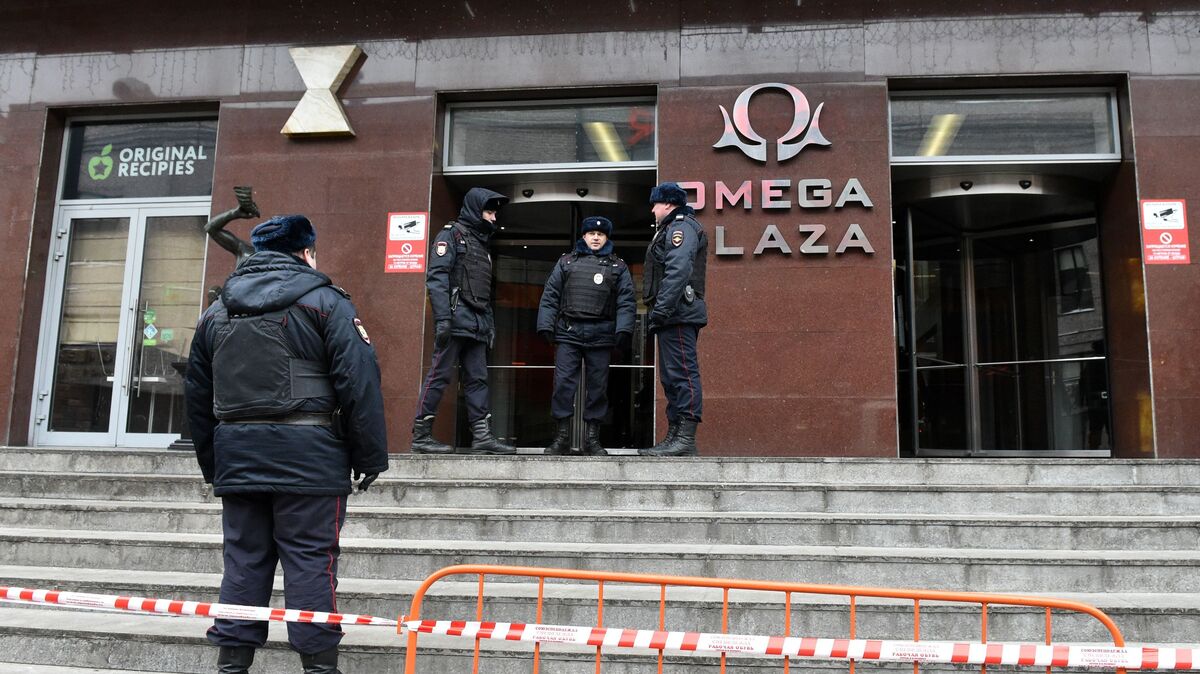 Russian police officers gather Jan. 28 at the entrance to the business center that houses the office of opposition leader Alexei Navalny's Anti-Corruption Foundation in Moscow. Police broke into the headquarters using a saw, and detained several members of Navalny's team.

What kind of threat Navalny really poses to Putin, 65, who has run Russia for 18 years, is open to debate.

"Putin is doing everything to convince himself that Navalny isn't dangerous," said Russian political analyst Tatyana Stanovaya. "Navalny is betting on the gradual deterioration of the regime as it gets older."

A poll published by the Carnegie Moscow Center this week shows that 42 percent of Russians believe "decisive, comprehensive changes" are necessary — while almost the same amount, 41 percent, said "only minor changes" are needed and 11 percent think no changes are necessary. Asked to name the politician with the best reform plan, 25 percent said Putin and just 2 percent Navalny. More than 60 percent said "no one" or "not sure."

An Internet native with a fuzzy ideology

Navalny vows to keep fighting Putin by using his main tool to reach Russia's far-flung population — the Internet. He has more than 2 million followers on Twitter as well as 2 million subscribers to his two YouTube channels.

"Probably you can call me a person of the Internet," he said. "It was a lifesaver not just for me but everyone else who suddenly found themselves under censorship."

Navalny has been all but banned from Russia's national TV stations, except for documentary-style films that paint him as a paid stooge of Western European governments. In January, Putin said criticism from the State Department that Navalny's candidacy was not registered showed the U.S. administration's true preference for who should sit in the Kremlin, and constituted interference in Russia's domestic politics.

Navalny has built his political career on attacking Putin and investigating the fortunes of members of the president's entourage. But asked to describe his own ideology, Navalny balks, saying Russian political labels don't translate well to the American context. For example, he said, the views of a Russian Communist might be most comparable to a right-wing conservative in the United States, while a liberal in Russia could be considered a libertarian in America.

Under the conditions of an authoritarian regime, political labels are irrelevant, Navalny said, because his main goal is to unite people who agree on basic values such as the separation of powers, the rule of law and an independent judiciary. Once Putin leaves power, that coalition will then go its separate ways, he said.

Some opposition supporters cannot forgive Navalny for flirting with far-right Russian nationalists before the last wave of anti-government protests six years ago. He maintains that the label doesn't bother him.

Political analyst Stanovaya said she wouldn't exaggerate Navalny's sympathy for nationalists, as any politician who wants to be successful in Russia has to appeal to Russian patriotism.

"It's Navalny's conscious choice not to define his ideology so he doesn't box himself in beforehand. He needs the freedom to act, and the game he's playing is beyond any ideological boundaries," Stanovaya said. "He's counting on protest — any protest — and on discontent in the population."

Putin's "creeping expansion into the Internet"

A lot of Navalny's ideas about how politics should work come from an eight-month fellowship at Yale University eight years ago, which he said opened his eyes to "the bigger picture" of how the rest of the world functions, including the rough-and-tumble ride of American politics. One reason for current tensions between the U.S. and Russia is that Putin's people still can't believe that democracy actually works, according to Navalny. 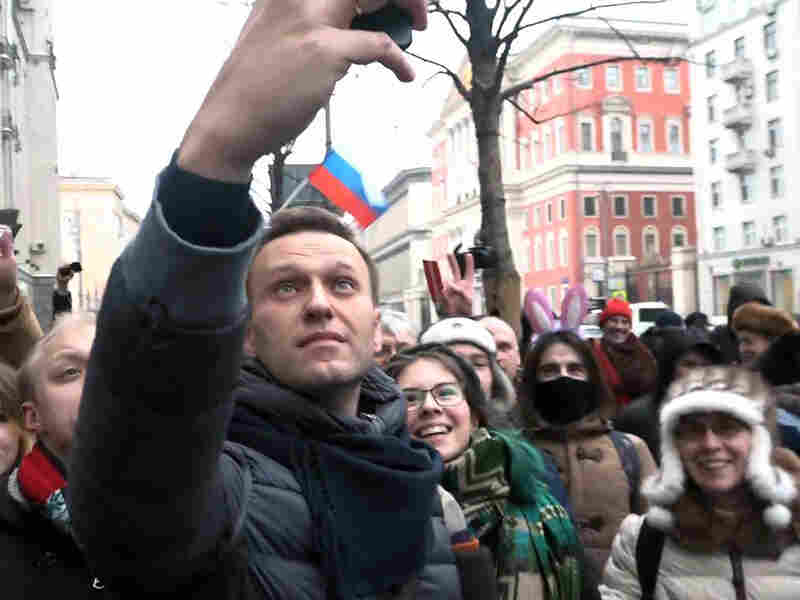 A still image taken from an AFPTV footage shows opposition leader Alexei Navalny taking a selfie during a Jan. 28 rally calling for a boycott of March 18 presidential elections. Navalny makes heavy use of Twitter, YouTube and other online outlets to build his movement. Alexandra Dalsbaek/AFP/Getty Images hide caption 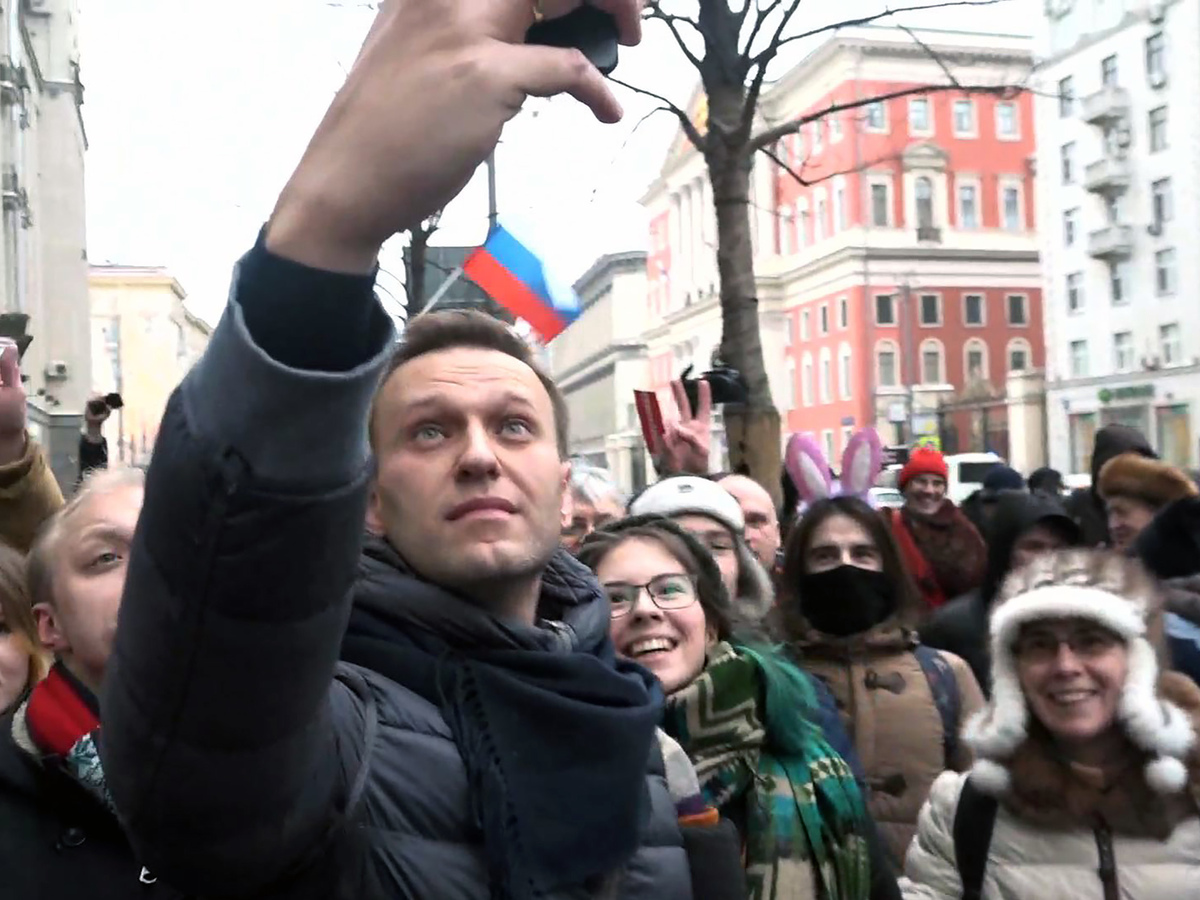 A still image taken from an AFPTV footage shows opposition leader Alexei Navalny taking a selfie during a Jan. 28 rally calling for a boycott of March 18 presidential elections. Navalny makes heavy use of Twitter, YouTube and other online outlets to build his movement.

He said he doesn't have any doubts that the Russian government interfered in the 2016 U.S. presidential election because similar methods have been deployed against members of the Russian opposition: hacked emails, the publication of false personal information and attacks on social media accounts by armies of bots.

"Putin is conducting a creeping expansion into the Internet — extremely effectively and cheaply," Navalny said. "Of course he had fun hacking those servers and meddling, but it didn't have any significant effect on the elections."

Amid all the hostility between the U.S. and Russia, Navalny said the affinity between Putin and President Trump is inexplicable, especially considering that the Kremlin has based even its domestic policy on anti-Americanism. "This makes no sense, and there is no rational explanation for it. But maybe one day there will be a new Watergate and we'll learn a lot about these amazing ties," he said.

Beyond the personal relationship of presidents, Navalny said that the strategic interests of Washington and Moscow are largely aligned, and that instead of squabbling the countries should be pursuing nuclear non-proliferation and fighting terrorists together. A key move to bettering relations would be for Russia to stop its involvement in the war in eastern Ukraine, he said.

"We're a Western country," Navalny said. "Russia — based on its size, population, nuclear weapons and intellectual potential — should strive to be a leading European country."

Russia should aim to join the European Union and work on participating in a joint security system with NATO members like the U.S., Britain and France, he said.

Persevering in pursuit of transformation

Russia's orientation has been the subject of debate for centuries in a tug-of-war between Westernizers and traditionalists. In today's globalized world, that choice is no longer relevant, said Fyodor Lukyanov, editor-in-chief of Russia in Global Affairs.

"It's not about how to become part of so-called wider Europe, because wider Europe is shrinking," said Lukyanov, referring to centrifugal forces driving countries like Britain out of the EU. "It's a completely different constellation of forces. It's not current or relevant for Russia, NATO or Europe." 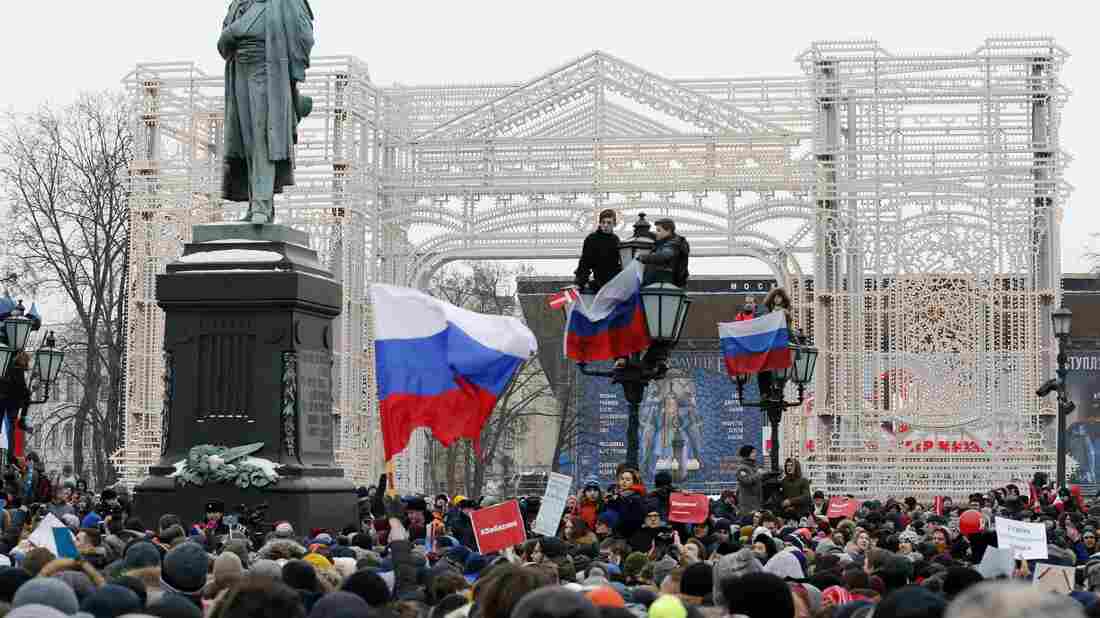 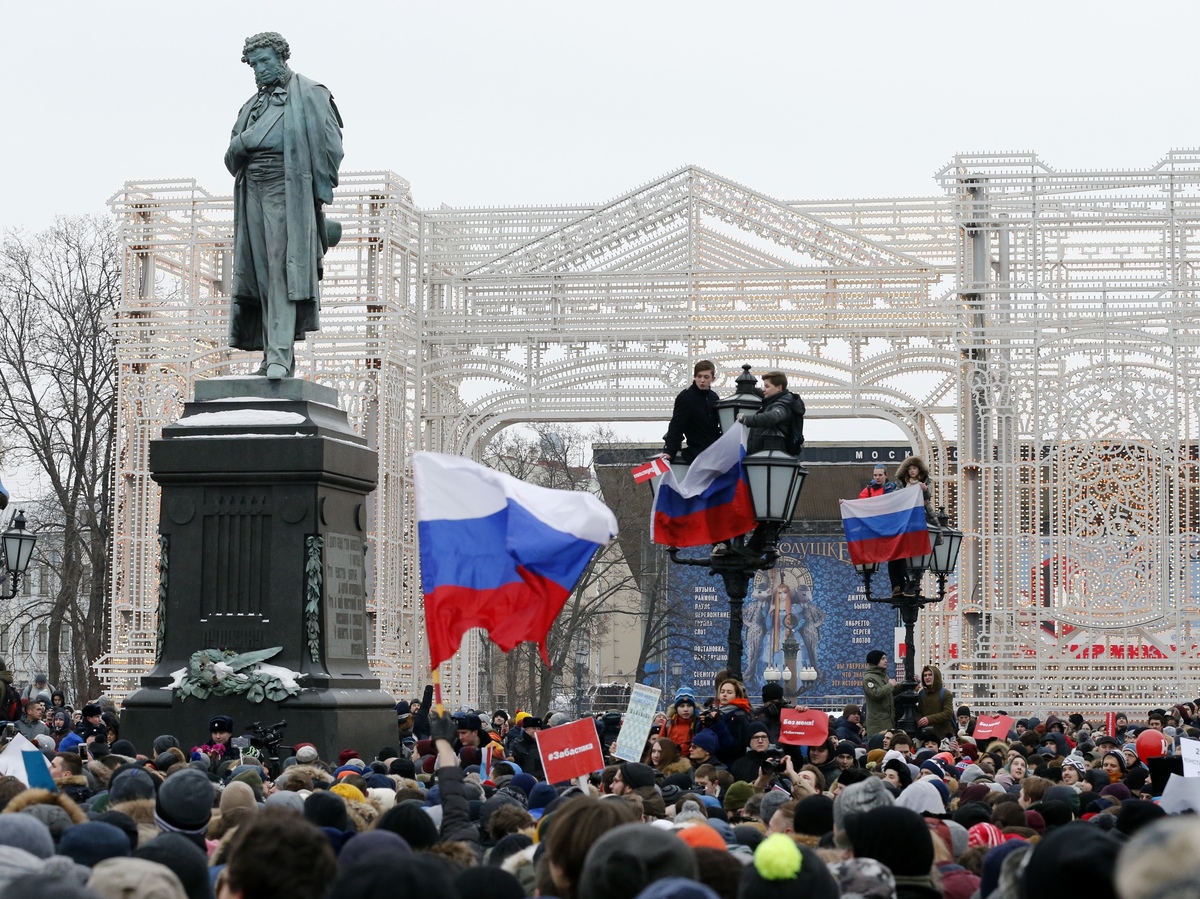 Protesters fly Russian flags during a Jan. 28 rally at Pushkin Square in Moscow, in opposition to authorities' decision to reject Navalny's presidential candidacy.

Even if Navalny's vision of Russia's place in the world seems illusory, he also wants Russia to be more Western internally. Should he ever come to power, Navalny said, his first priority would be reforming the judiciary. The second would be abandoning Russia's strong presidency for a European-style parliamentary system.

For now, Navalny is focusing on activating what he calls the "living political network" he formed while preparing his luckless presidential bid. On election day, Navalny wants to send out teams of volunteers to observe polling nationwide for any irregularities.

A little more than six years ago, reports of mass vote rigging during parliamentary elections served as the spark that got tens of thousands of Russians taking part in a winter of anti-government protests that rattled the Kremlin.

Navalny remembers. In December 2011, he was one of the first opposition leaders to call people out to the street.