Accessibility links
How I Moved My Cat From Israel To Pakistan : Parallels NPR's Islamabad correspondent faced a thorny problem when she moved from Jerusalem to Pakistan: how to transport her pet between countries that lack diplomatic links and don't recognize each other.

How I Moved My Cat From Israel To Pakistan

How I Moved My Cat From Israel To Pakistan 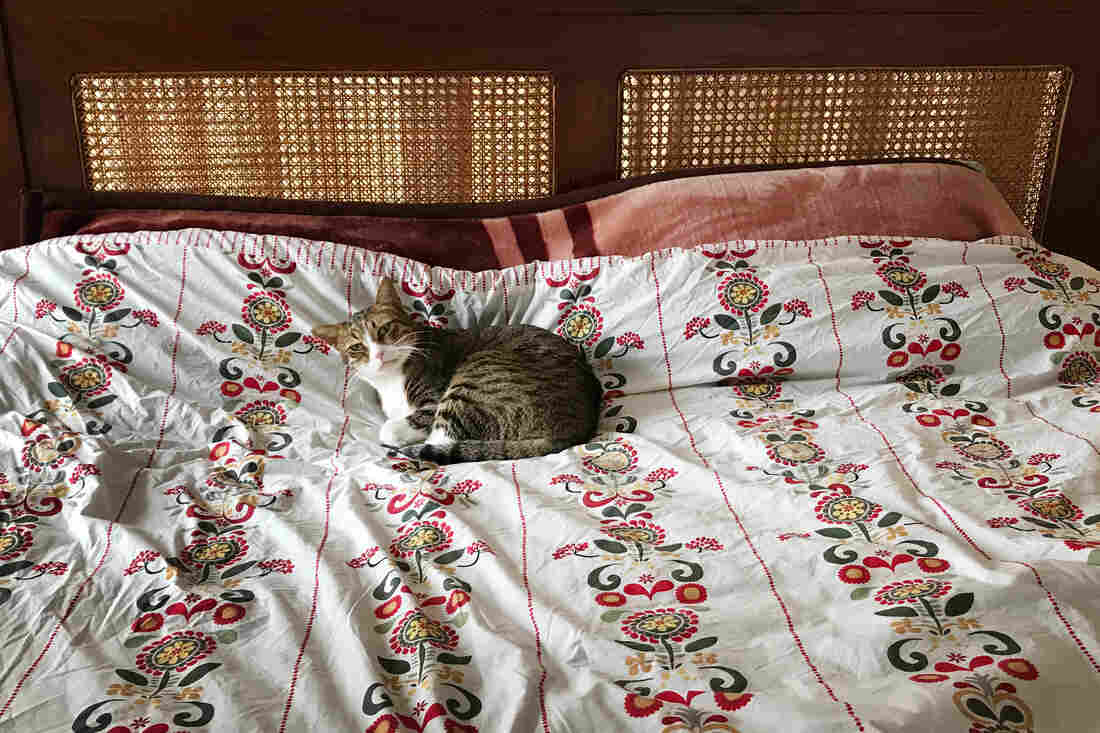 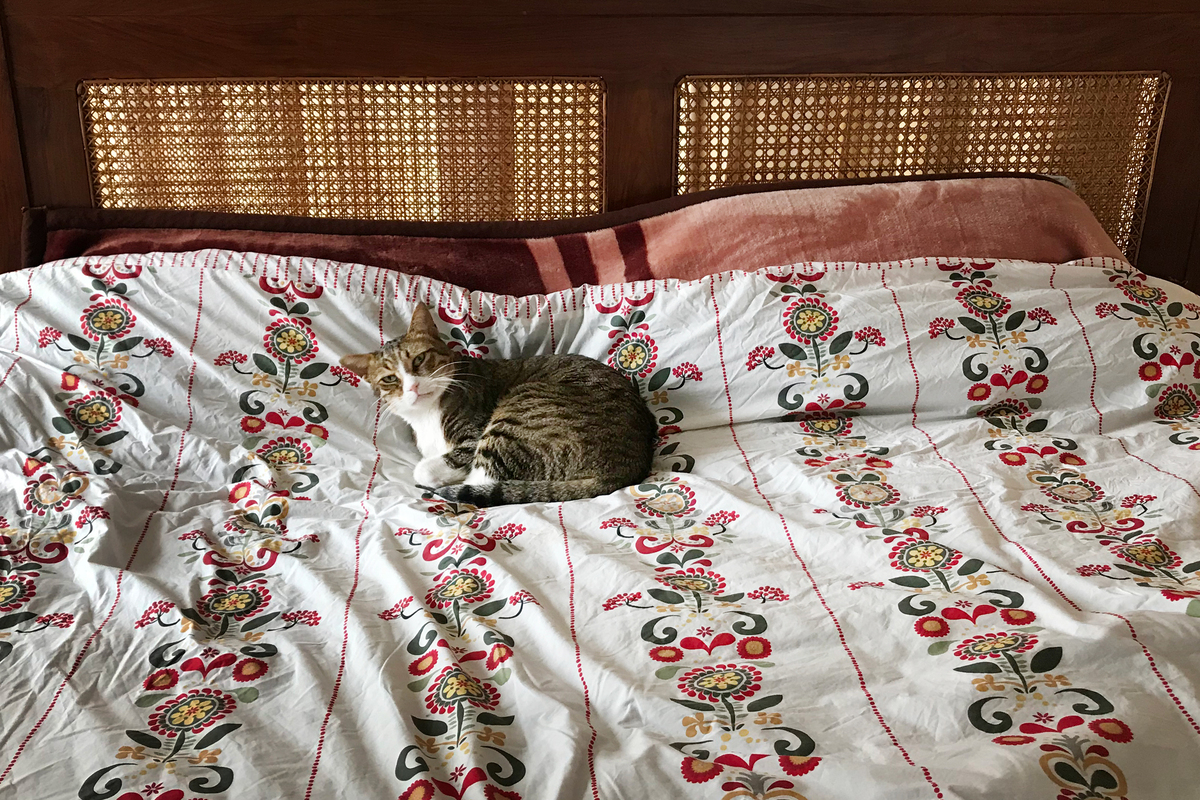 Shawareb the cat reclaims his place on NPR correspondent Diaa Hadid's bed hours after he arrives in Islamabad.

I recently hunched over my desk lunch and typed: How to get a cat from Israel to Pakistan.

This is not a question that Google easily answers. There are no holiday packages from Israel to Pakistan — no direct flights, and no diplomatic relations.

But here I was, asking the Internet weird questions at NPR's Washington, D.C., headquarters in June. I was being trained there before I was to be dispatched as their Islamabad-based correspondent. Most of my worldly possessions — and my cat — were in Israel and the Palestinian Territories, where I was previously based as a Mideast correspondent for The New York Times.

Foreign correspondents are famous for adopting cats. It's a quixotic proclivity, because of how frequently we travel. But no other correspondent I've heard of had tried something like this. And I asked all the cat-loving correspondents I could find.

Finally, through the company Animal Airways, I reached Eytan Kreiner, an Israeli veterinarian. I explained the pickle I was in.

"Don't worry. We are experts in taking animals to enemy countries," he said in a thick Israeli accent. I imagined an aged Mossad operative.

"We just took a dog to Iran," he said. "We have an underground network of vets who help us. Everybody is sympathetic to animals. Even enemies."

Kreiner said he could fly my cat from Israel to a third country. They would change his papers and then fly him to Pakistan. I dutifully paid $350 to start the process.

My cat Shawareb — Arabic for "mustache" — was an accidental acquisition.

In 2015, I lived in the Palestinian city of Ramallah in the West Bank. There, one of my roommates brought him home: a stray, mewing, gray-striped fur ball with enormous green eyes. I liked him but I wanted nothing to do with him.

Hanging out with this one for #boxingday #catlady on #Ramallah #WestBank

I grew up with countless cats in the yard of my parent's home in Canberra, Australia. In the late 1980s, my father, a postman, went broke and the cats became a luxury. Instead of cat food, we gave them scraps of meat from the sheep that Dad slaughtered for halal meat.

The cats were a burden. Dad abandoned a few at the local dump, but let two or three stay. I think he saw how much they meant to me. I didn't have many friends, and I spent my school lunchtimes in the library reading books. At home, the cats were reliable company.

But I developed nasty allergies as a teenager. Cat hair triggered violent sneezing. My eyes watered and my skin itched. My parents gave the last cats away. I didn't touch another feline for two decades.

Then I moved to Ramallah. It's a fun place, with hipster bars and country outings, but I had few friends. I was lonely. My old childhood yearning for a friendly cat welled up inside. My roommate lost interest in the kitten and soon I was letting him sit on my desk as I wrote. I took two or three antihistamines a day to breathe. He slept curled into a ball near my shoulder. I took more pills. I took to calling him "Shawareb" for his funny kitten mustache.

I knew he was mine when he got sick — a tooth infection left him a smelly, mangy mess. I drove him to Jerusalem to see a vet. He removed most of Shawareb's teeth and charged me $400.

When we went for a follow-up, demonstrations had broken out through the West Bank. The main Israeli military checkpoint was closed as soldiers fired tear gas and rubber bullets at masked youths hurling rocks and flaming bottles. I tried to leave through another checkpoint. Masked young men burning tires on the road stopped me.

"The road is closed, auntie," one of them announced. He glanced into my car and I grimaced.

Most Palestinian residents of the West Bank can only enter Jerusalem with hard-to-obtain Israeli military permits. Here I was, cavorting about with a cat, no less, for a follow-up at the vet. I felt silly. It wasn't lost on me that my Ramallah street cat may have more freedom of movement than the area's human residents.

I called the vet in Jerusalem. "I'm late. There's a few problems on the road."

Over the next 18 months, I moved five more times — it was a procession of bad-luck apartments, from Ramallah to Jerusalem. Shawareb came with me.

He grew into a friendly thing, always seeking out a lap to sit on. He meowed endlessly for attention. He left mauled birds under my bed. My cat allergy disappeared.

In November 2016, I decided to leave The New York Times — and Jerusalem. I packed my things into boxes. But Shawareb?

I got in touch with an old friend, Amit. He lived on a communal farm known as a kibbutz on the Israel-Lebanon border. He promised to care for Shawareb until I could take him.

Last February, I drove six hours across the country to deliver Shawareb to Amit in Kibbutz Misgav-Am. Shawareb settled into Amit's tiny apartment. I thought about my life that had taken me across these enemy lands — for me a patchwork region of the Middle East that I loved deeply. Covering its conflict and suffering left me tired and broken hearted. The sun set into a gorgeous sky of pink and orange, and I said goodbye. I left Jerusalem in March. 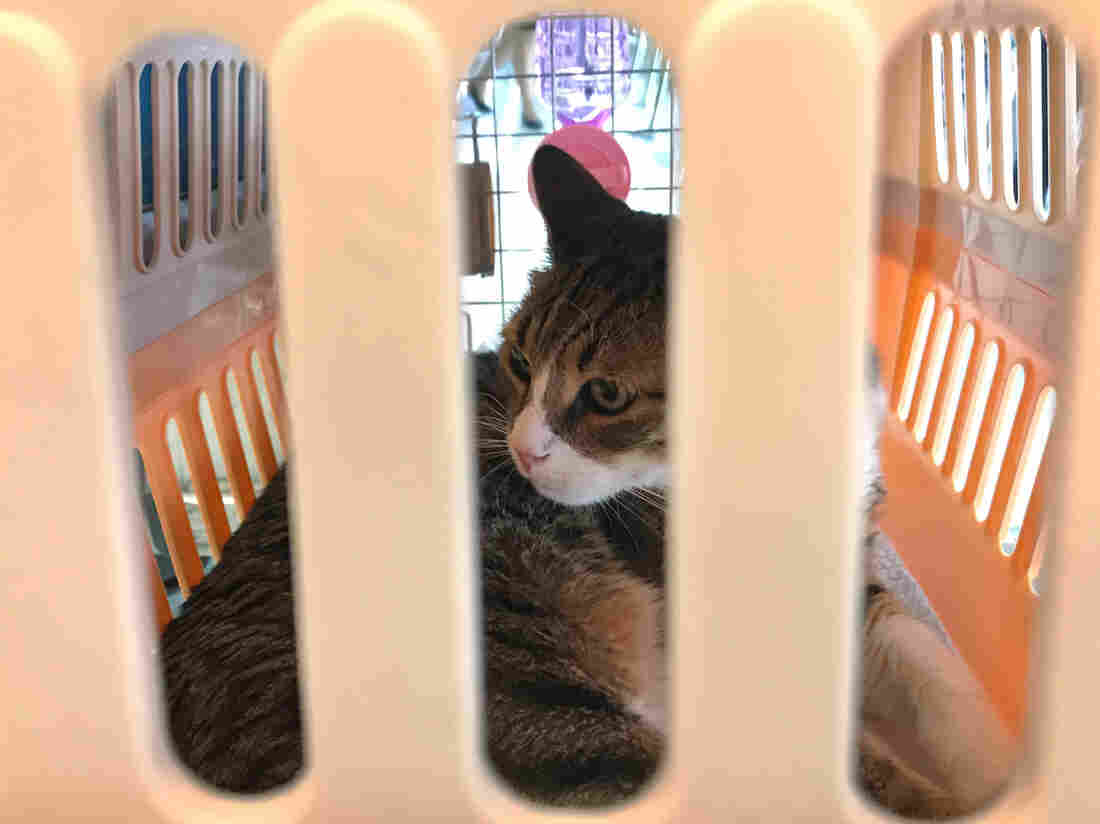 Shawareb sits in his cage as he's taken to the vet in January 2017, to check up on his teeth. Diaa Hadid/NPR hide caption 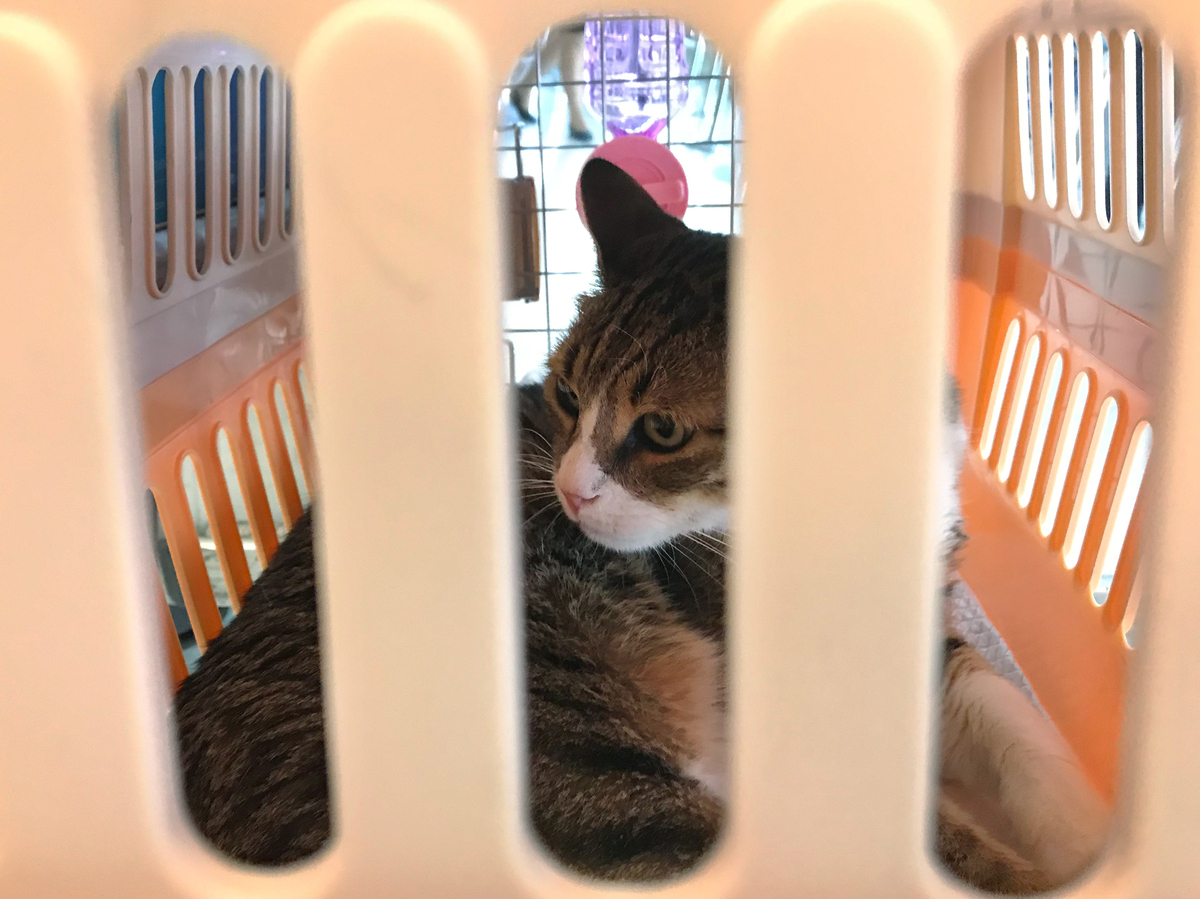 Shawareb sits in his cage as he's taken to the vet in January 2017, to check up on his teeth.

Then during my visit to Washington last June, I began thinking: Could I find a way to move Shawareb to Islamabad?

For weeks, I plotted how to ship him to Islamabad with Ahava Cohen, who works with Kreiner, the Israeli vet. We needed a third country that had direct flights to Tel Aviv and Islamabad. We had three options: London, Istanbul and Bangkok.

The airline had to be cat-friendly. The third-country airport had to process Shawareb quickly. We settled on Bangkok.

Cohen cheerfully informed me that the company would do the move for $3,335 — over double the yearly wage of a cook in Islamabad.

That's immoral, I thought. If I did it myself, it would be about half the cost.

There was a glitch: I had just moved to Pakistan, but I only had a single-entry visa. If I left the country, I couldn't re-enter.

I asked on a reporters' Facebook group in Jerusalem if somebody could take the cat to Bangkok — I'd pay — causing a pileup of journalists cheerfully volunteering for the flight. But the problem was Pakistan: Getting a visa here is hard, and I feared problems for anybody coming from Tel Aviv.

Then Amit called with some pressing news. He moved apartments and his new landlord didn't want pets. Shawareb had to go. I begged for more time.

I finally received my Pakistani multi-entry visa in October. I arranged for a week off in January.

But those days were planned for another big day: my wedding in Australia. I eyed the dates. If I cut short our honeymoon, I could fly to Bangkok and pick up the cat.

Suddenly I was spending money furiously on Shawareb's big move. I paid for my flight, which included agreeing to pay $25 for every kilogram of Shawareb. He's 8 kilos — 17 pounds.

I paid for Amit's trip to Bangkok. Friends in Bangkok directed me to a cat-friendly hotel while we sorted his papers.

Amit arrived in Bangkok with Shawareb. I arrived at 3 a.m. to the cat-friendly hotel. Shawareb meowed when I open the door. I curled up with the cat on the couch and slept.

The next morning, I handed Shawareb over to a travel company with the dubious job of transforming him: from a Palestinian cat with Israeli papers into a Thai cat heading to Pakistan. They only needed a few hours, they said, and they'd drop Shawareb off at the airport.

With a few hours before my flight, Amit and I caught up. He talked me through Shawareb's epilepsy medicine, and gave me a tincture for his anxiety.

We lost track of time. I raced to a taxi.

I sat on my suitcase at Gate 4 as hundreds of people poured in through sliding doors. Shawareb soon emerged on a luggage trolley, pushed by a representative of the Thai travel company. 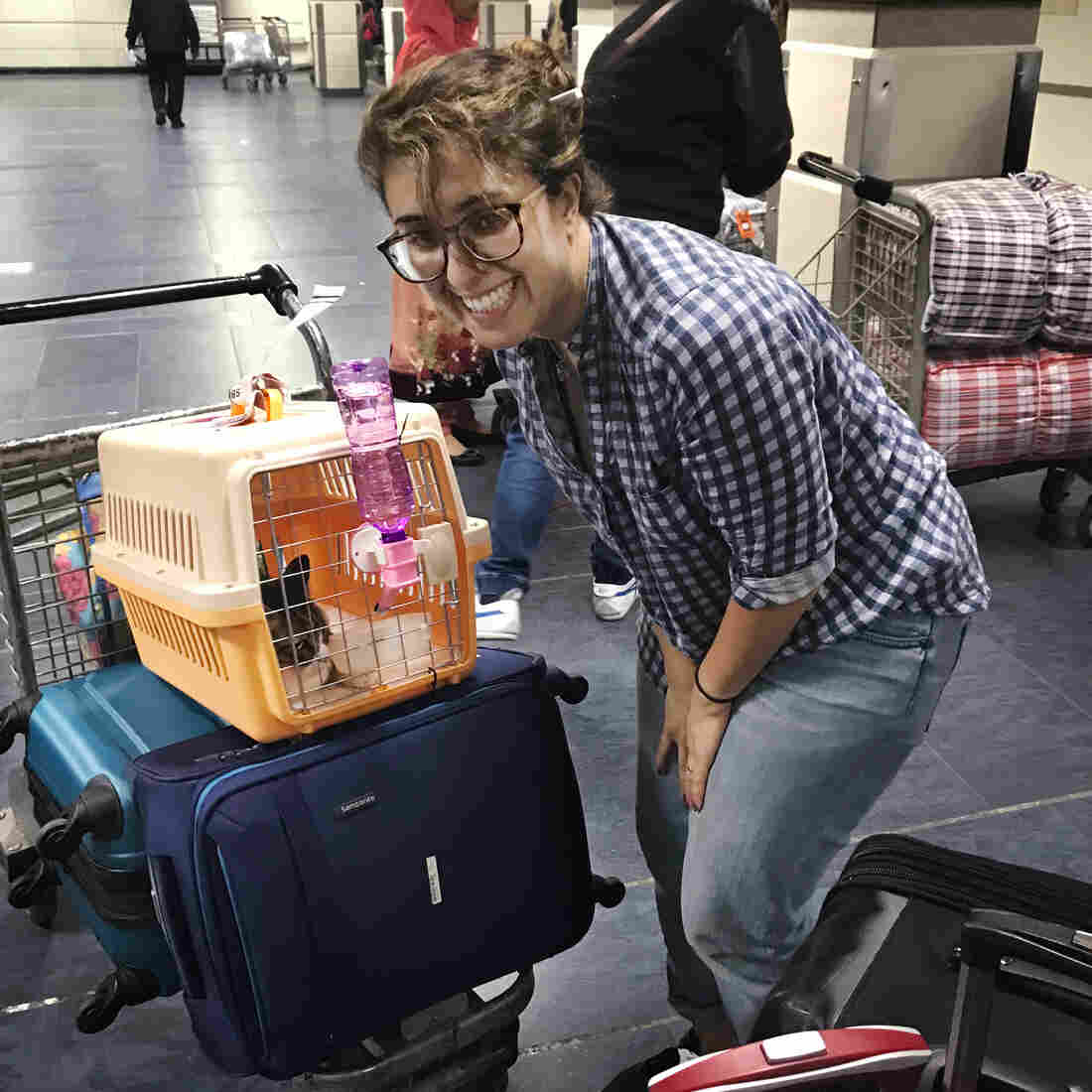 toggle caption
A friend of Diaa Hadid's for NPR

In Suvarnabhumi Airport, traveling with a cat is like presenting a baby. Shawareb was smiled at and treated gently, even when he was put through a scanning machine.

The representative gave me two envelopes: one with all Shawareb's Israeli documentation, another with his new Thai papers.

Nearly a year after I drove Shawareb to a kibbutz on the Israel-Lebanon border, my little Palestinian cat made it home. Amid the crowds and chaos of Islamabad's Benazir Bhutto International Airport, a luggage handler left Shawareb's carrier near the baggage claim. A Pakistani man on my flight carried him over to me.

Nobody asked for Shawareb's papers. There seemed to be some security alert. Airport staff were busy screening all the suitcases coming off the flights.

Shawareb is still adapting. He hisses at Doodh, the elderly Siamese cat that I'm taking care of for a friend. He wants constant belly rubs. When I video call my husband, he sits in front of the screen. He shredded the black foam of the recording studio.

And when he jumps on my desk, crunching the keyboard with his paws and deleting my work, I cuddle him and bury my face in his fur.

I'm so happy he's here. I hope we make it together, to our next destination. 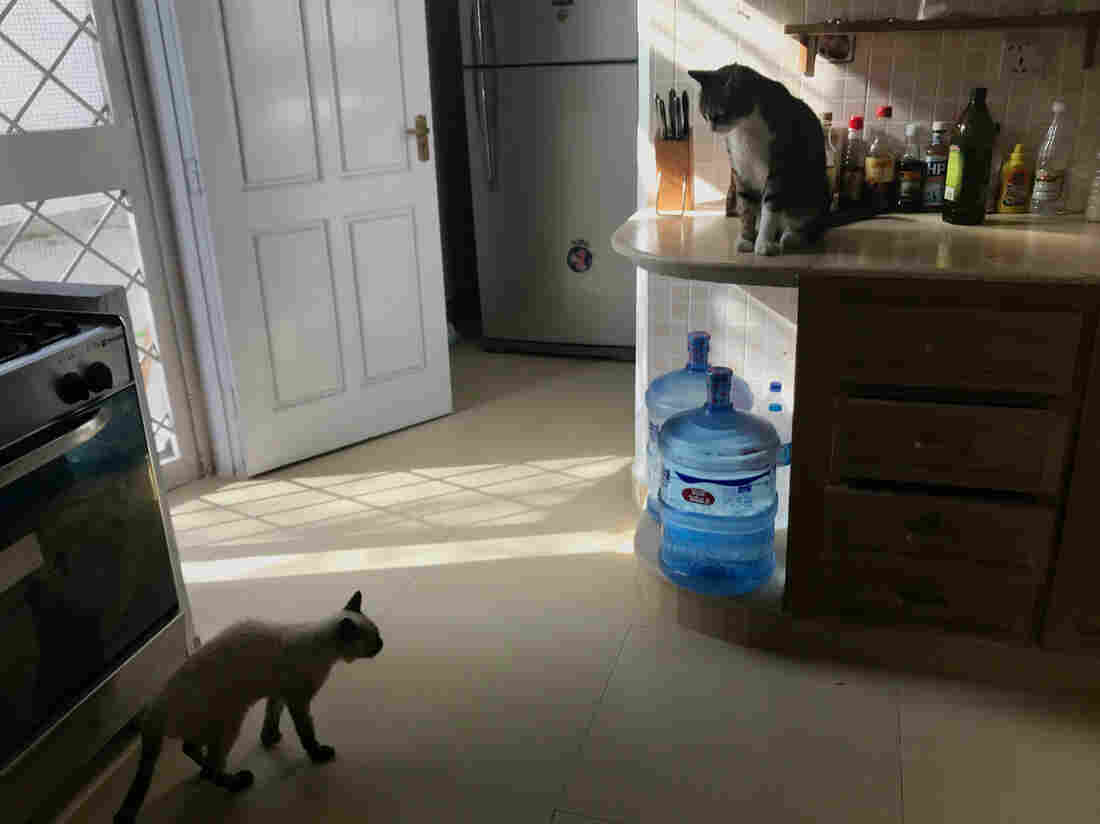 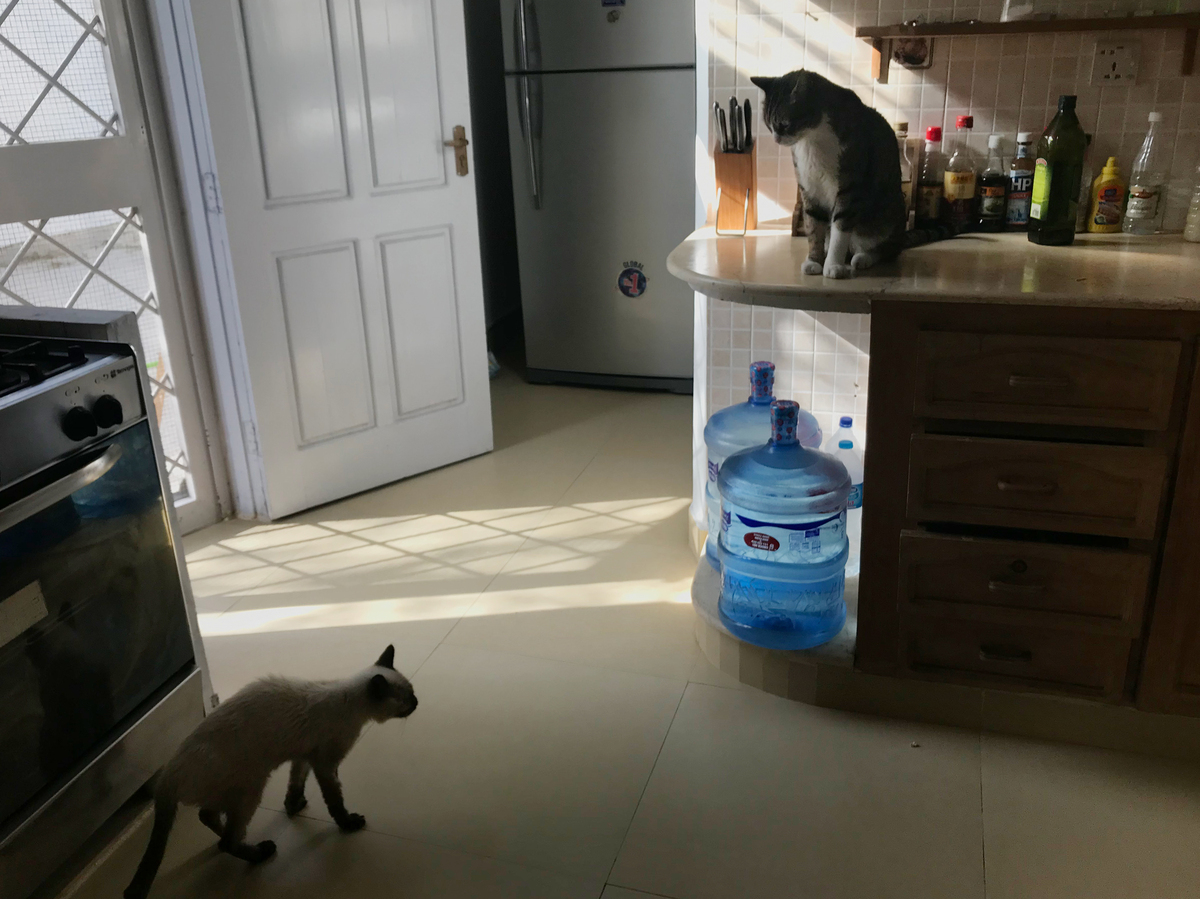