Accessibility links
Yazidi Women Finally Go To School, Defying Former ISIS Rulers — And Their Own Parents : Parallels Some villagers considered it improper for girls to go to school. Now, after surviving the reign of ISIS, young Yazidi women in Iraq's Kurdistan region are getting an education. 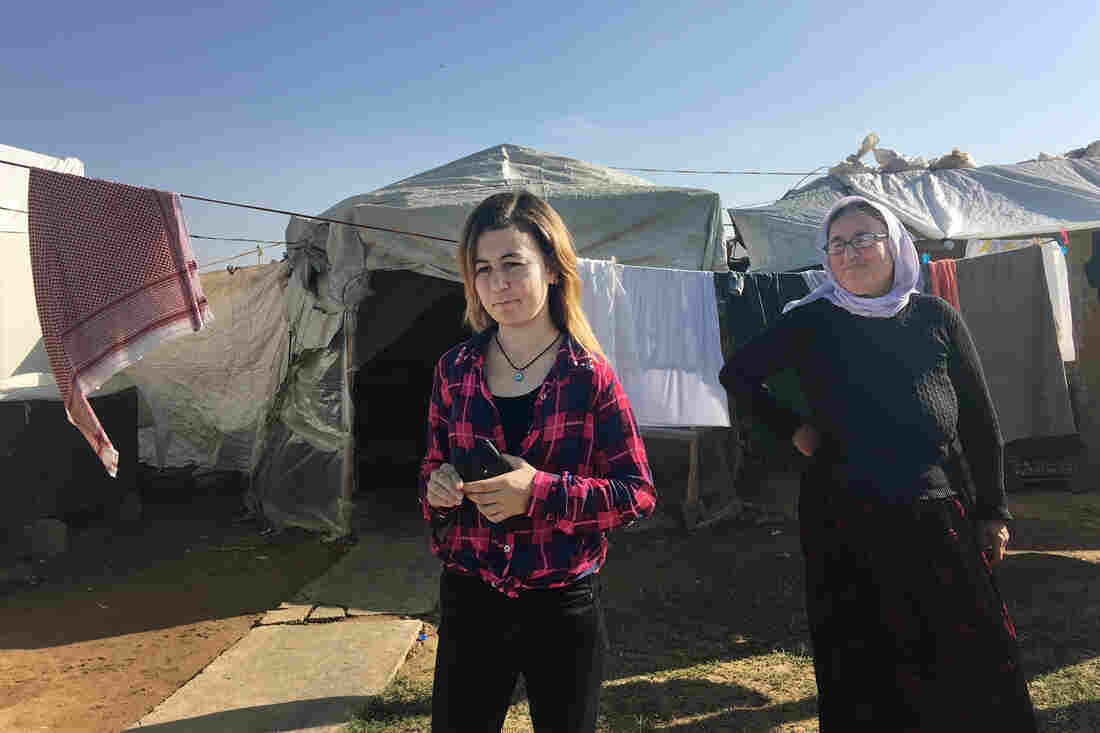 Najla Hussin and her mother at their makeshift home in a village of displaced Yazidis near Dohuk in the Kurdistan region of Iraq. Jane Arraf/NPR hide caption 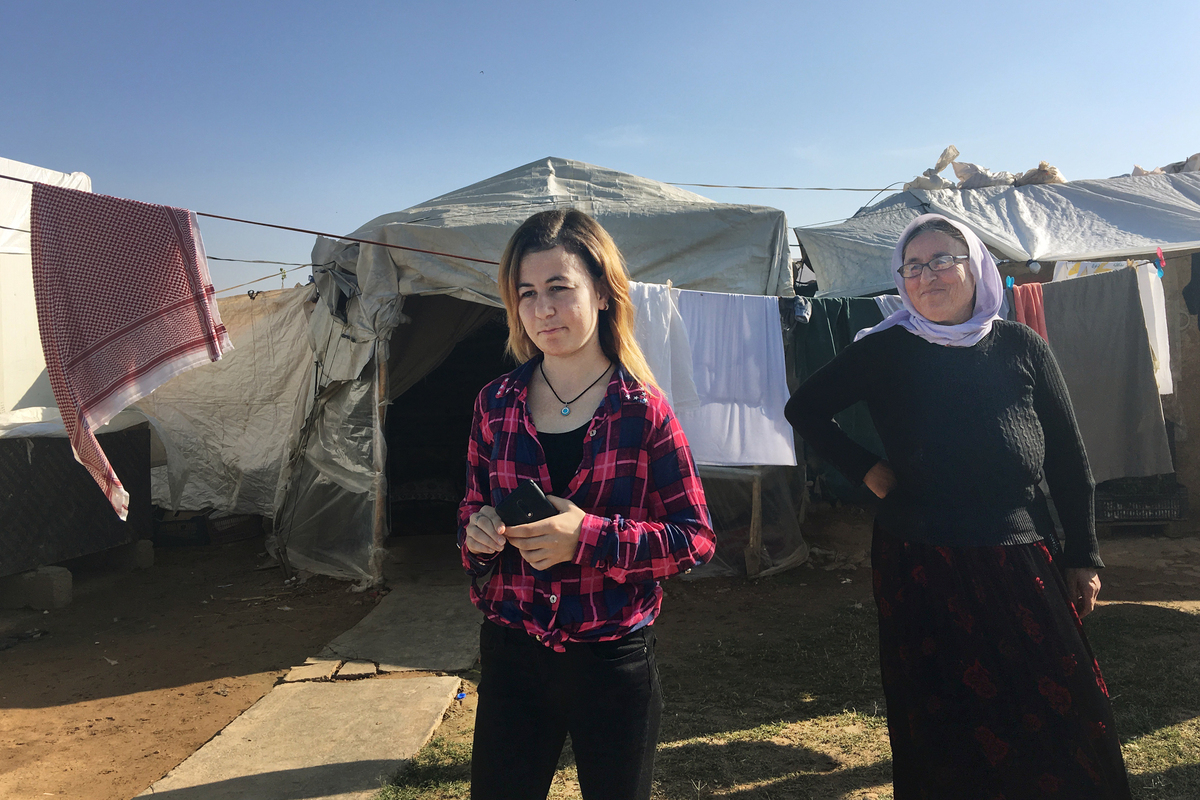 Najla Hussin and her mother at their makeshift home in a village of displaced Yazidis near Dohuk in the Kurdistan region of Iraq.

Before she went to New York last fall to speak to thousands of people, Najla Hussin had never been more than a few hundred miles from her village in northern Iraq.

Hussin, 20, is from Sinjar in northern Iraq, where ISIS swept in four years ago to kill and enslave members of the ancient Yazidi religious minority.

Malala Yousafzai, the Pakistani activist for girls' education, met Hussin and other young Yazidi women during a trip last summer to the Kurdistan region of Iraq. She invited Hussin to speak on the sidelines of the U.N. General Assembly.

ISIS massacred Yazidi men and is believed to have captured more than 6,000 Yazidi women and children in 2014 — using many of the girls and women as sex slaves and rewards for militants. The kidnappings and killings are considered genocide by the United States and the United Nations.

Before ISIS, the Yazidi community in Sinjar was one of the poorest and most underdeveloped groups in Iraq. In some villages, it was considered improper for girls to go to school. But now, young Yazidi women like Hussin have resolved to take their future into their own hands.

"It was a new experience and it was good for me to do everything alone," says Hussin, in a village in the Kurdistan region of Iraq where her family now lives. "I was happy because I shared my story with people and they will know how hard I worked to get an education."

When Hussin first spoke to NPR, she had dyed her hair turquoise blue, which faded to green. It was a small rebellion among some much bigger ones. She's under 5 feet tall and in her checked shirt and jeans she looks even younger. But she is fierce. 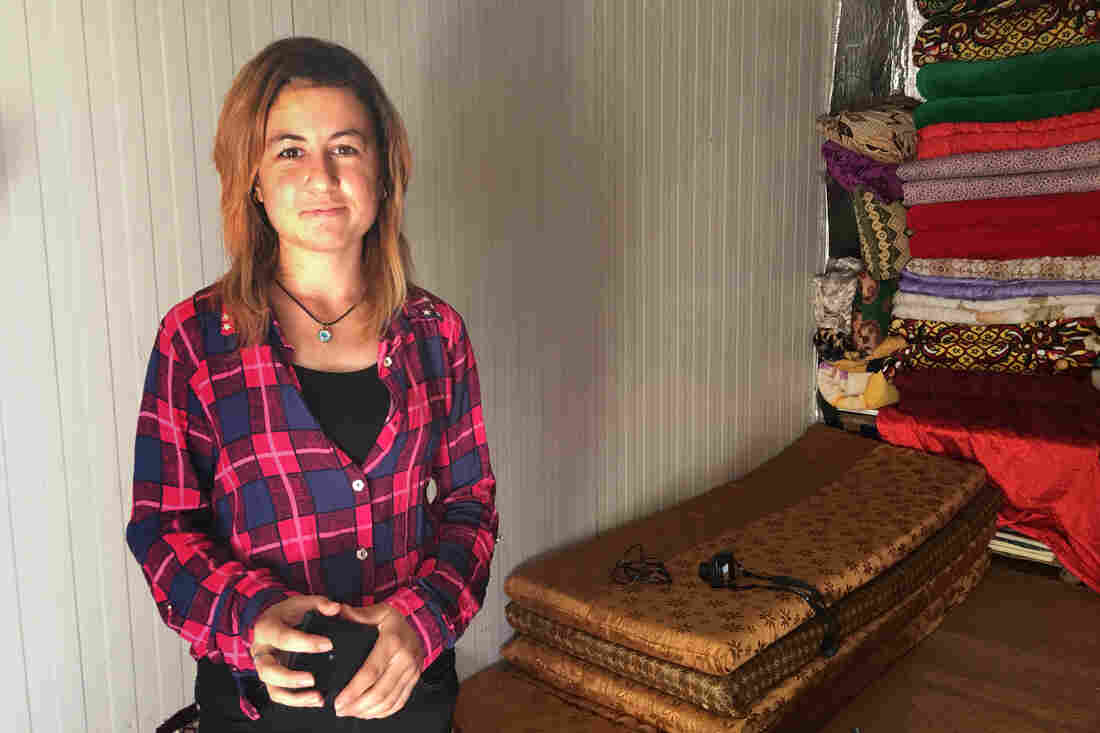 Najla Hussin in her family's trailer that she shares with some of her 12 brothers and sisters. Hussin, a 20-year-old Yazidi woman, has struggled, against her parents objections, with the suicide of a friend and displacement by ISIS' genocide of her people, to go to school. She's now in ninth grade. Jane Arraf/NPR hide caption 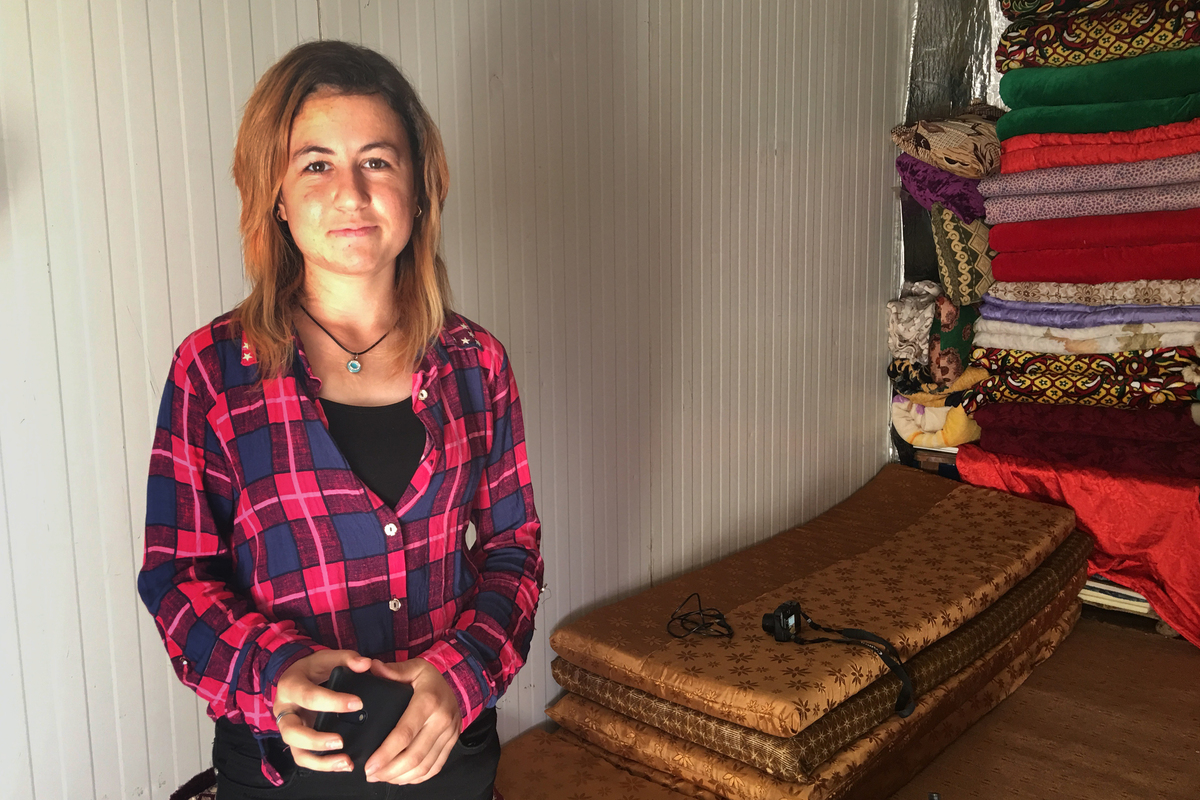 Najla Hussin in her family's trailer that she shares with some of her 12 brothers and sisters. Hussin, a 20-year-old Yazidi woman, has struggled, against her parents objections, with the suicide of a friend and displacement by ISIS' genocide of her people, to go to school. She's now in ninth grade.

In socially conservative Sinjar, girls were expected to stay home and do work in the house or on the farm until they married as teenagers. Hussin persuaded her parents to let her attend primary school. That stopped in seventh grade.

"They said, 'That's enough of going to school. She should be a housewife,'" Hussin recalls her parents saying. "I was thinking of myself as a child, not as a married woman ... and I thought all my dreams won't come true."

So she escaped. On the very day she was to marry the son of a friend of her father's, she threw off her high heels, hiked up her long dress and ran. When she came back a few days later, her father was so angry he didn't talk to her — or let her go to school — for a year.

Then she witnessed something so terrible she didn't want to study. Her best friend died after setting herself on fire. The friend's brother had found out she had a boyfriend and was threatening her.

"I saw her when she was burning," Hussin says. "I saw everything and after that I couldn't focus on anything. I was thinking of that all the time."

A whole year went by and she had no interest in studying. Then ISIS came to their village.

Like many Yazidis who escaped to the Kurdistan region, Hussin's family ended up living in a construction site with plastic sheets for walls. 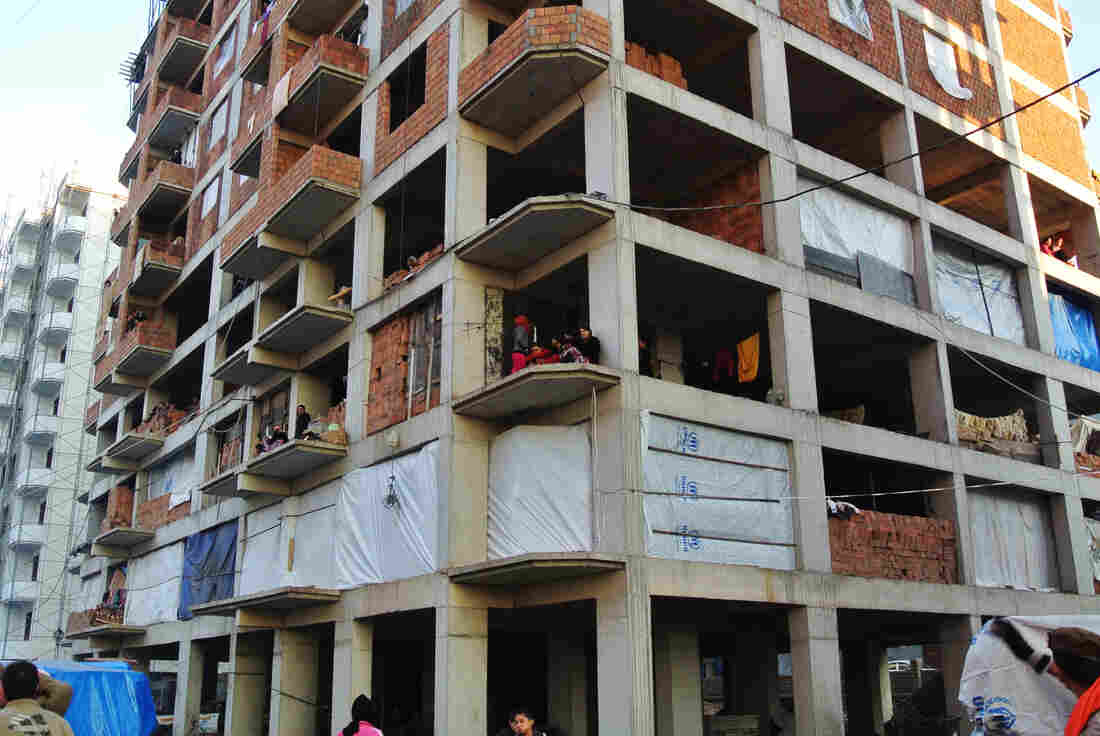 Many Yazidis ended up living in construction sites like this one, with no electricity and no running water, after fleeing Sinjar in 2014. This site near Dohuk was intended to be luxury apartments but the building stopped because of the economic crisis. Jane Arraf/NPR hide caption

There was no school, and there were no teachers, so Hussin gathered the younger children from the neighborhood together to teach them to read and write.

A year later, she got to go to school again. That's where she met Hadiya Haskan, who also escaped from Sinjar. We went to visit Haskan in a nearby camp for displaced Yazidis.

When Haskan first spoke to NPR last summer after meeting Malala, she still had big dreams. She wanted to go to college, maybe in America. She wanted to be a writer. 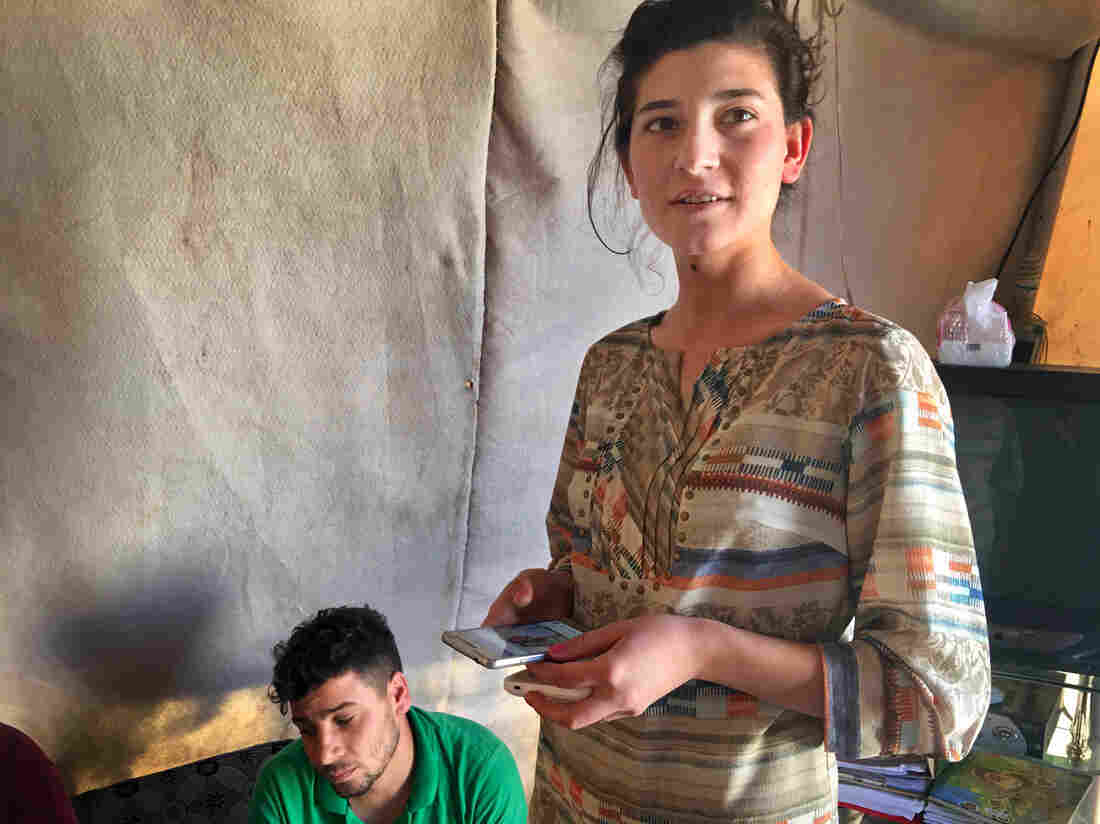 Hadiya Haskan and her husband Amin Shani Bagi in their tent in a camp for displaced Yazidis in the Kurdistan region of Iraq. Haskan is 19 and in 11th grade. She dreamed of going to college but says she had to get married because her family needed the money. "It's alright though because I love him," she says. Jane Arraf/NPR hide caption 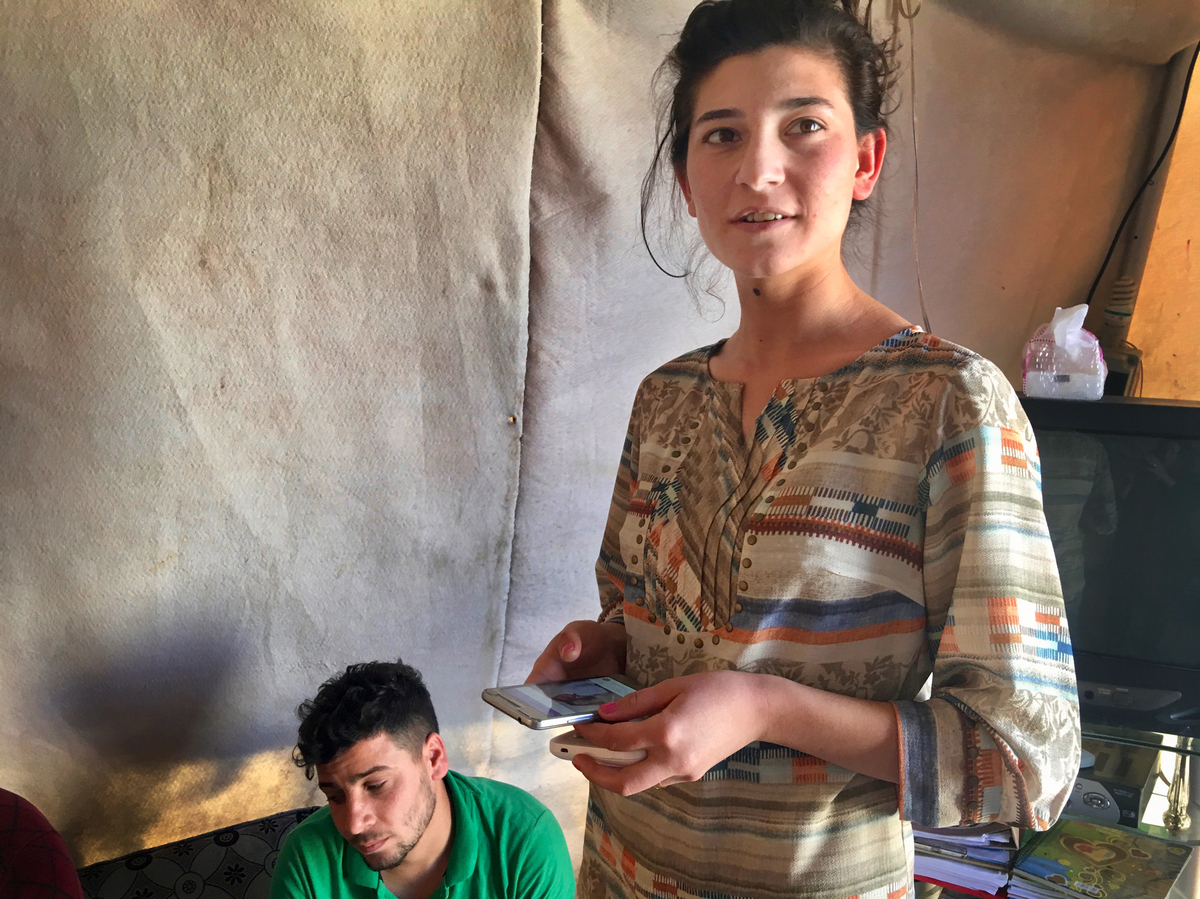 Hadiya Haskan and her husband Amin Shani Bagi in their tent in a camp for displaced Yazidis in the Kurdistan region of Iraq. Haskan is 19 and in 11th grade. She dreamed of going to college but says she had to get married because her family needed the money. "It's alright though because I love him," she says.

A few months later, she was married. She's 19 and in 11th grade — like almost all Iraqis in areas that were under ISIS control, she lost years of school.

She says she got married because her father and brothers couldn't find jobs and her family was desperate for money. In traditional Yazidi culture, the groom pays the bride's family. Her family received about $3,000 — enough to pay the medical bills and living expenses for her brother to go to college.

Haskan says it's OK because she loves her husband. Amin Shani Bagi, 23, is smart, at the top of his political science class in university, and handsome. He says if Haskan gets into college, he will help her study.

It isn't the life that Haskan dreamed of, growing up in a village in Sinjar. None of her five older sisters had ever gone to school, but she insisted that she shouldn't stay home just because she was a girl.

It was a two-hour walk. When she couldn't go, she studied at home with her brothers' and cousin's books — including an English dictionary.

Haskan ran away from home at 15 when her parents told her she had to drop out of school to marry her cousin.

She eventually returned home and went back to school. But everything changed four years ago when ISIS swept into Sinjar, killing Yazidi men and kidnapping women and children.

Haskan and her family escaped through Syria and into the Kurdistan region of Iraq. Like most Yazidis, they ended up living on construction sites and in camps with no running water or electricity. For more than a year there were no schools for the displaced Yazidis. 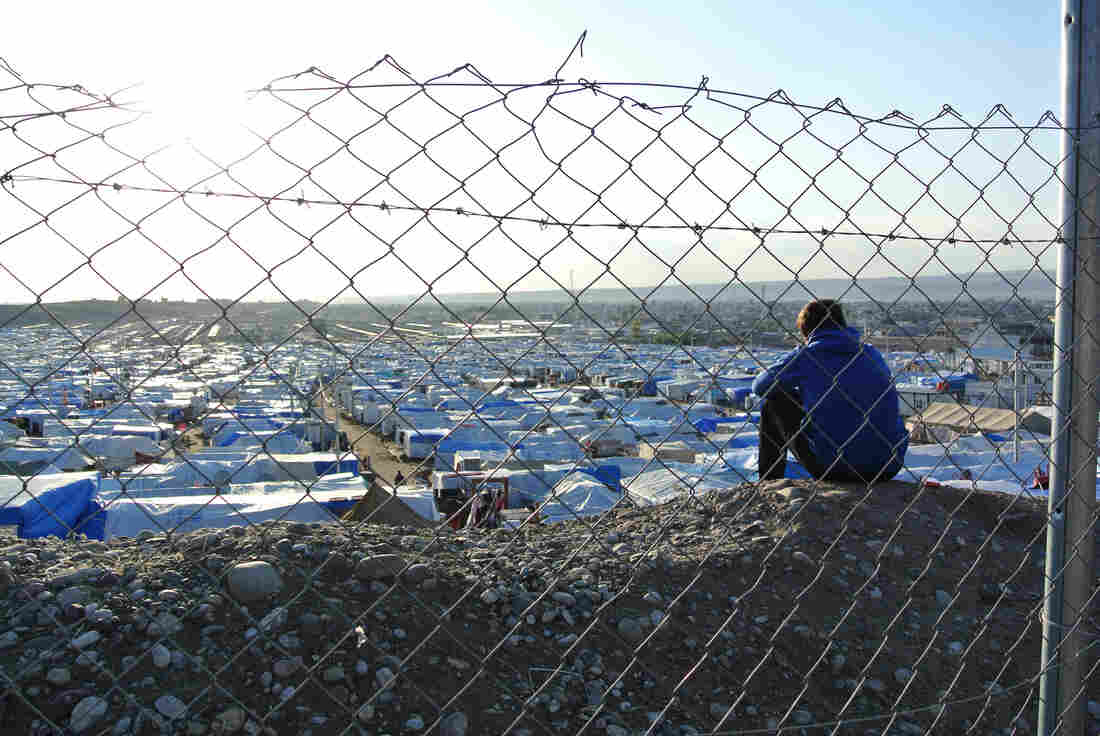 A camp for displaced Yazidis and other Iraqis in the Kurdistan region of Iraq in 2015. Many of them have been unable to return home to Sinjar where ISIS killed and kidnapped thousands of members of the ancient religious minority. Jane Arraf/NPR hide caption

Apart from mattresses on the floor, Haskan and Bagi's tent is mostly bare. There is a television with a few books on a stand underneath. One of them is The Diary of Anne Frank — the story of the Jewish teenager who kept a journal while in hiding in German-occupied Amsterdam during the Holocaust. Anne Frank was 15 when the Nazis found her family and sent them to a concentration camp.

Haskan says she was the same age when ISIS came to Sinjar to slaughter the Yazidis.

"I really love Anne Frank ... I am thinking she is in the same situation like me," Haskan says, sitting on the floor of the tent. "It is a different war but the same things happen to us — especially girls."

Hussein shows me a wedding photo. She's wearing a pale yellow party dress, not the big white wedding dress she'd always planned. Instead of splurging on a party, the couple used the money in an unsuccessful attempt to get to Germany. After three years of living in a camp, Bagi says no one is helping them.

"We Yazidis had top students and a lot of them were killed when ISIS came — that's why we don't have a future here," Bagi says.

The young women talk about their futures. Haskan is certain they will get to Germany. She still plans on being a writer.