Accessibility links
At Munich Security Conference, Frayed Relations On Display As Global Crises Grow : Parallels Confrontation and ultimatums replaced compromise and consensus at the meeting, where North Korea and the Iran deal topped the agenda. A commentator described it as "the end of the road" for diplomacy. 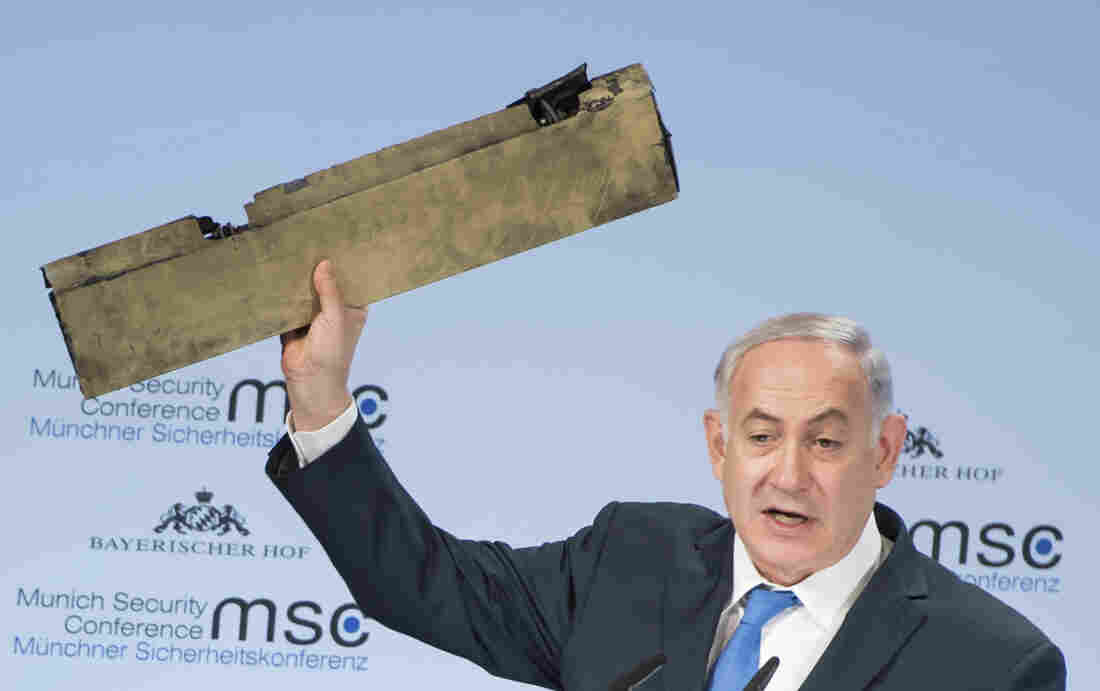 At the Munich Security Conference in Munich on Sunday, Israeli Prime Minister Benjamin Netanyahu holds a part of a downed drone that he said came from an Iranian drone shot down over Israeli airspace earlier this month. Lennart Preiss/AP hide caption 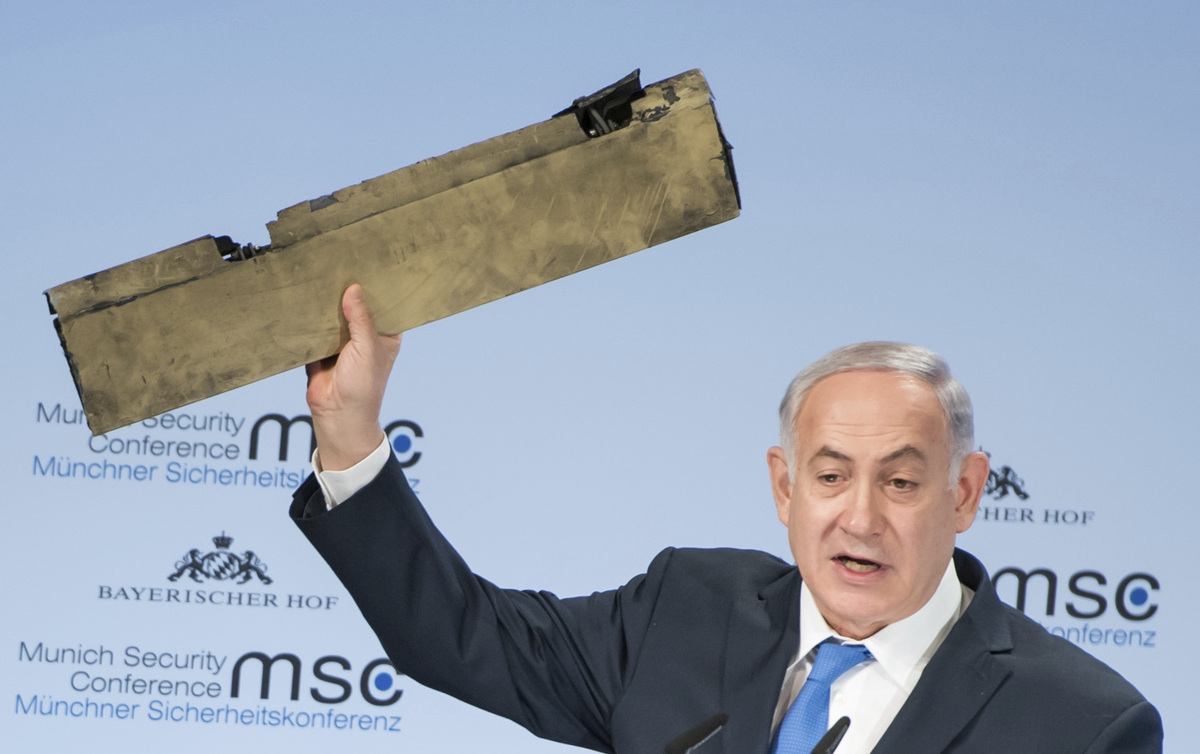 At the Munich Security Conference in Munich on Sunday, Israeli Prime Minister Benjamin Netanyahu holds a part of a downed drone that he said came from an Iranian drone shot down over Israeli airspace earlier this month.

The Munich Security Conference is usually a forum for world leaders to meet on the sidelines and strive for consensus and compromise. But this year's gathering is more likely to be remembered for saber-rattling and ultimatums, and the lack of discernible progress on resolving lingering conflicts or brewing crises around the world.

One of the more dramatic moments came Sunday during a speech by Israeli Prime Minister Benjamin Netanyahu, who addressed Iranian Foreign Minister Javad Zarif, who was at the conference, but not in the audience at the time.

"Mr. Zarif? Do you recognize this? You should. It's yours," Netanyahu said, as he held up a rectangular piece of metal that he said came from an Iranian drone shot down over Israeli airspace earlier this month.

"You can take back with you a message to the tyrants of Tehran," he added. "Do not test Israel's resolve." Tehran denied the drone belonged to Iran.

But Netanyahu's threat fit right in with the theme of this year's conference: "To the Brink — And Back?"

"The warning signs are flashing in bright red," MSC Chairman Wolfgang Ischinger said. "The world, I think, has moved ... much too close to the brink of major interstate conflict." Deutsche Welle commentator Matthias von Hein later noted: "It seems as if diplomacy has reached the end of the road."

Several leaders and ministers from the Middle East who attended the conference lashed out at their rivals and threatened military action. Zarif, who took the stage an hour after Netanyahu, called the Israeli leader's presentation a "cartoonish circus."

He declined to address Netanyahu's specific allegations, although Tehran has long denied them.

Netanyahu told the conference that Iran is trying to expand its control in the Middle East through political and armed proxies in Syria, Yemen, Gaza and Lebanon. He made a new claim that Iran is looking to provide Hezbollah in Lebanon with "game-changing" precision-guided weapons.

Netanyahu also criticized the July 2015 Joint Comprehensive Plan of Action (JCPOA) between Iran and six major powers: the U.S., China, Russia, Britain, Germany and France, likening it to the Munich Agreement of 1938 in which Nazi Germany was allowed to annex parts of Czechoslovakia. Under JCPOA provisions, Iran agreed to restrict its nuclear program in exchange for relief from sanctions that had crippled its economy.

Trump Again Keeps U.S. In Iran Nuclear Deal — But Threatens To Get Out Later

President Trump, too, has been critical of the Iranian nuclear deal, which he's threatened to end. But the Reuters news agency on Sunday reported that it had obtained a State Department cable showing the U.S. administration softening its position on the deal. Reuters reported that if the European signatories simply commit to improving it, Trump will renew U.S. sanctions relief on May 12 and keep the agreement alive for now.

Zarif, meanwhile, said it was "delusional thinking" to suggest, as Netanyahu did, that Iran won't act if the deal is scrapped.

"I can assure you that if Iran's interests are not secured, Iran will respond — will respond seriously — and I believe it would be a response that people will be sorry for taking the erroneous action they did," Zarif said.

Another crisis that dominated the conference was one emerging in Asia: North Korea's nuclear and ballistic program development.

"All allies are now within range of North Korean missiles," NATO Secretary General Jens Stoltenberg told conference goers. "Pyongyang is closer to Munich than it is to Washington, D.C., and therefore we must put maximum pressure on North Korea to abandon its nuclear program."

He emphasized the use of diplomacy and sanctions, but others at the conference said they feared misinterpretation or inflammatory rhetoric by the U.S. and North Korean leaders could lead to war.

An American bipartisan congressional delegation sought to reassure conference goers that despite media accounts, the White House had no "bloody-nose" strategy to strike North Korea pre-emptively. And national security adviser H.R. McMaster called on the international community to do more to rein in Pyongyang.

But Judy Dempsey, a nonresident senior fellow at Carnegie Europe, referred in a blog post to a "complete paralysis of diplomacy" when it came to tackling North Korean ambitions to acquire nuclear weapons.

Part of that is because China — widely viewed as the country with the most leverage over North Korean leader Kim Jong Un — was not represented at the conference by senior representatives, says former Australian Prime Minister Kevin Rudd, who heads the Asia Society Policy Institute in New York.

China is "responsible for 90 percent of North Korea's imports, practically all of its energy imports and as a consequence has a direct leverage on the government in Pyongyang, though I do not underestimate the difficulty of China seeking to fundamentally change North Korean behavior," Rudd said.

That China didn't send any top people may have to do with the fact that the Munich Security Conference remains first and foremost a forum for trans-Atlantic relations, which — as the weekend demonstrated — are rather frayed.

German Foreign Minister Sigmar Gabriel was one of many European officials who complained about the mixed messaging from Washington. He took a swipe at Trump, asking whether Germans should be left to figure out what America is thinking from "words, deeds and tweets."

Germans are "confused when we look across the Atlantic, because we are no longer sure we recognize our America," he said.

Many believe that the Trump administration is "acting against an international system and a framework of alliances, agreements, undertakings and understandings, which the U.S. set up and which the U.S. has been the basic bulwark of for essentially 70 years," said Dan Smith, director of the Stockholm International Peace Research Institute. "That's for almost as long as anyone has been alive here."

But Carnegie Europe Director Tomas Valasik, who is also a former Slovak ambassador to NATO, says European anxiety over the Trump White House is tempered by the growing U.S. military presence in Europe to counter Russian aggression.

He noted that American funding to the Europeans for deterrence has nearly tripled over the last 18 months.

A previous version of this story misspelled Tomas Valasik's last name as Valashik.