Accessibility links
On A Tense Press Tour Of Guantánamo's Prison Complex, Signs Of Expansion : Parallels The U.S. military prison at Guantánamo Bay, Cuba, is ready to accept more captives who may be sent there under President Trump's newly signed order to keep the prison open. 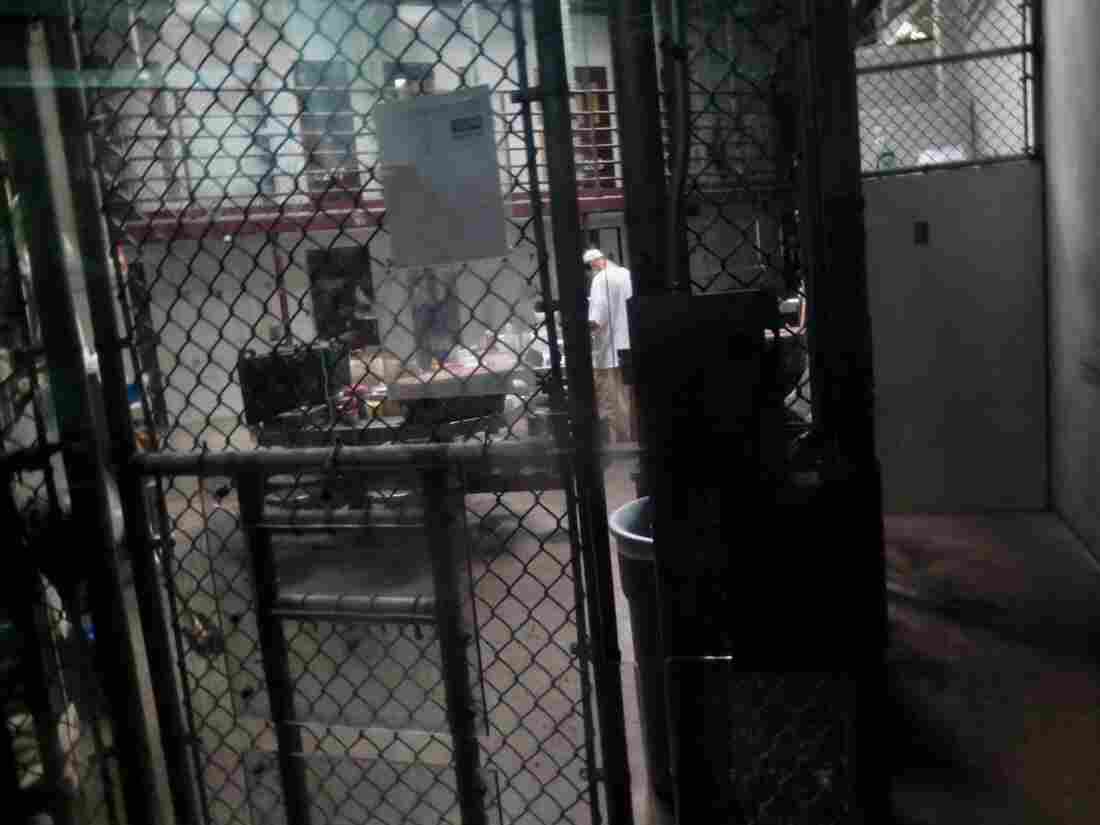 An unidentified detainee in Camp 6 of Naval Station Guantánamo Bay, one of 41 Muslim men held in the prison camp. (Photo reviewed and cleared by U.S. military.) David Welna/NPR hide caption 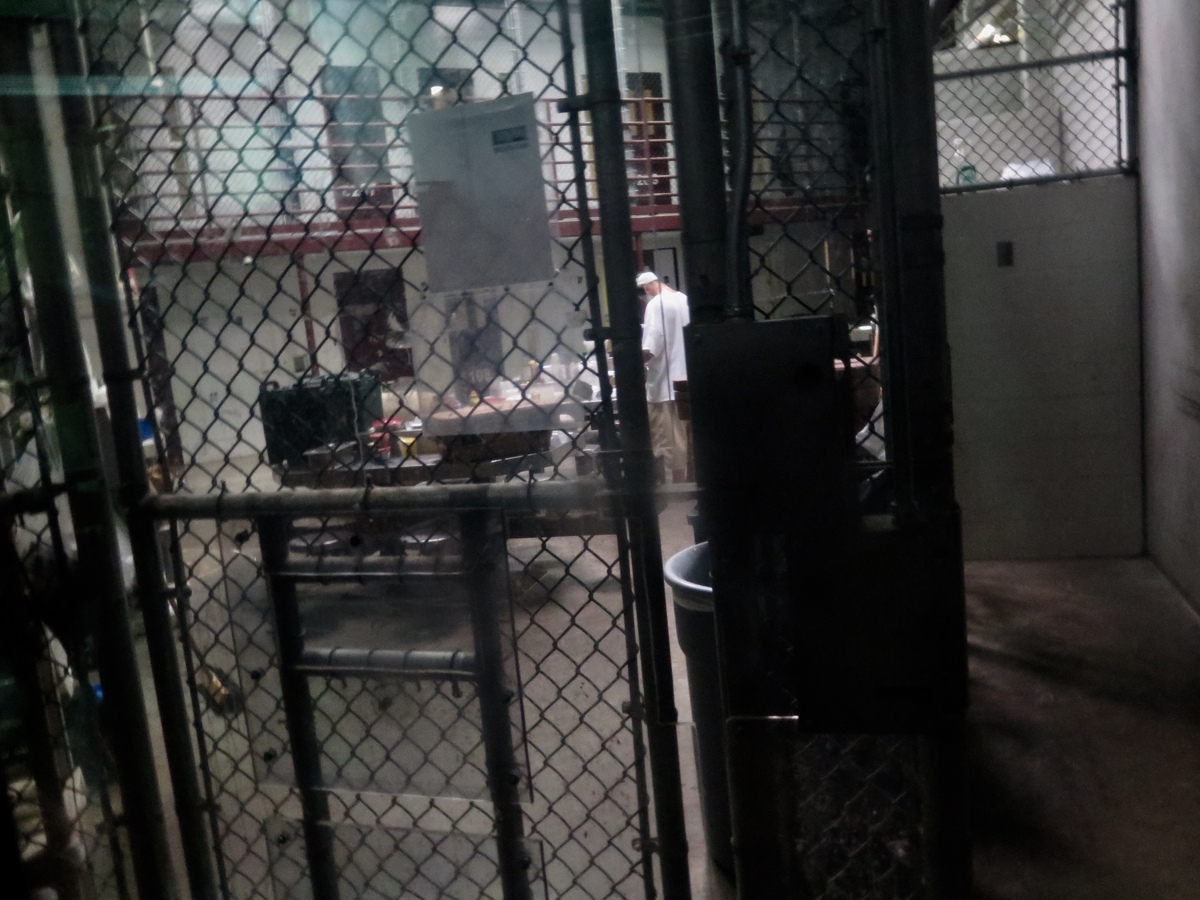 An unidentified detainee in Camp 6 of Naval Station Guantánamo Bay, one of 41 Muslim men held in the prison camp. (Photo reviewed and cleared by U.S. military.)

Two days before I left Washington in early February for my first tour inside Guantánamo's prison complex, an email arrived.

"Media representatives must agree to and sign, initialing each page, Media Ground Rules," it read, "prior to being allowed access to JTF-GTMO's area of operations."

I'd been going there for the past three years and a 13-page document I had signed and turned over to military authorities at the base had covered me each time.

It was an access agreement that the Pentagon had worked out in 2010 with input from First Amendment lawyers and executives from news organizations, including NPR.

The new sign-it-or-no-tour document was prepared with no known input from either news organizations or First Amendment experts, and it would prove a harbinger of additional press restrictions I'd not seen before at Guantánamo.

Tightening rein on the news media

A paragraph on the first page warns that "disclosure of classified information may subject the News Media Representative to criminal prosecution." That may seem reasonable.

But at Guantánamo, virtually everything — from windmill turbines churning on the hillsides to an entire prison camp — is classified. You can easily be capturing state secrets in your camera without intending to.

There is also a new provision about photos and videos that I might sooner have expected to find in communist-controlled Cuba than in this 45-square-mile patch of the island that's been under complete U.S. control since 1902.

"Imagery is considered property of the U.S. government," it reads, "until such imagery has been screened and approved for release." That is, until military censors screen your photos, they aren't yours. They belong to the U.S. government.

And taking photos with my smartphone? It's prohibited on the grounds that images could bypass military censors and upload directly to the cloud. And at all times the presence of a military minder is required to record sound or take photos.

I signed the document because I wanted what Cmdr. Leanos had promised me and seven other journalists: the first guided tour in six months of Guantánamo's prison camps. 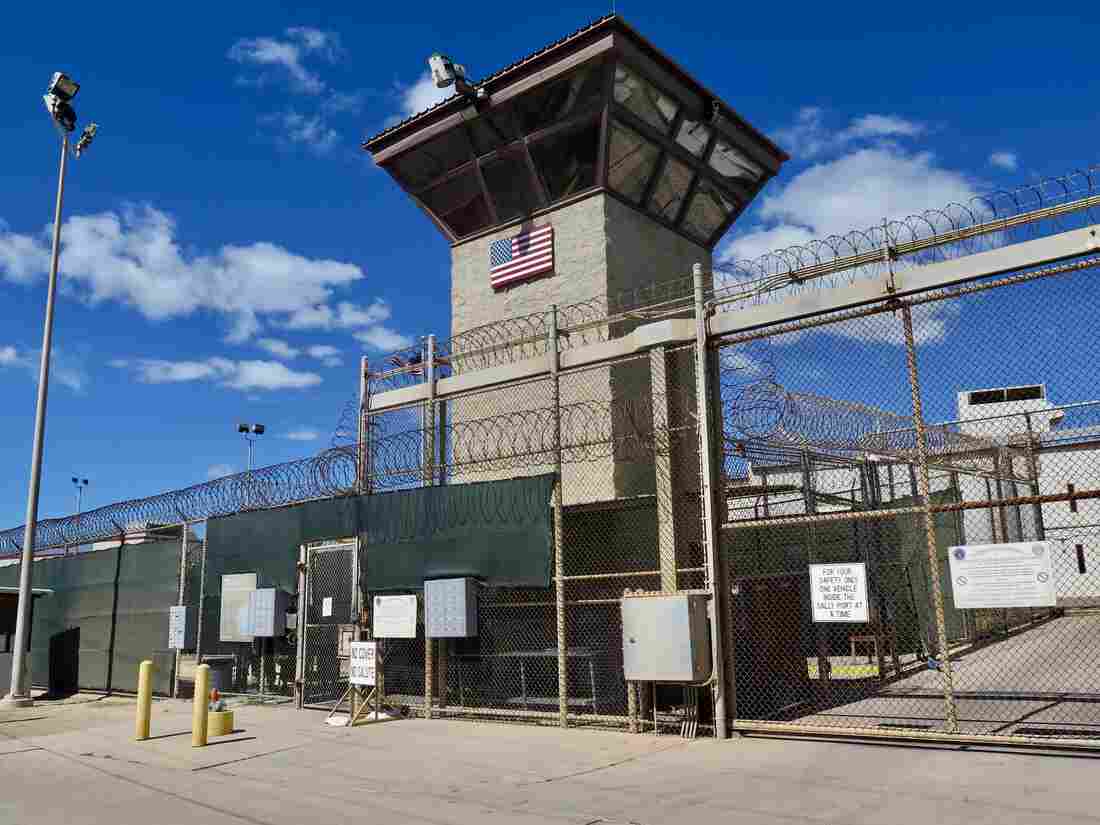 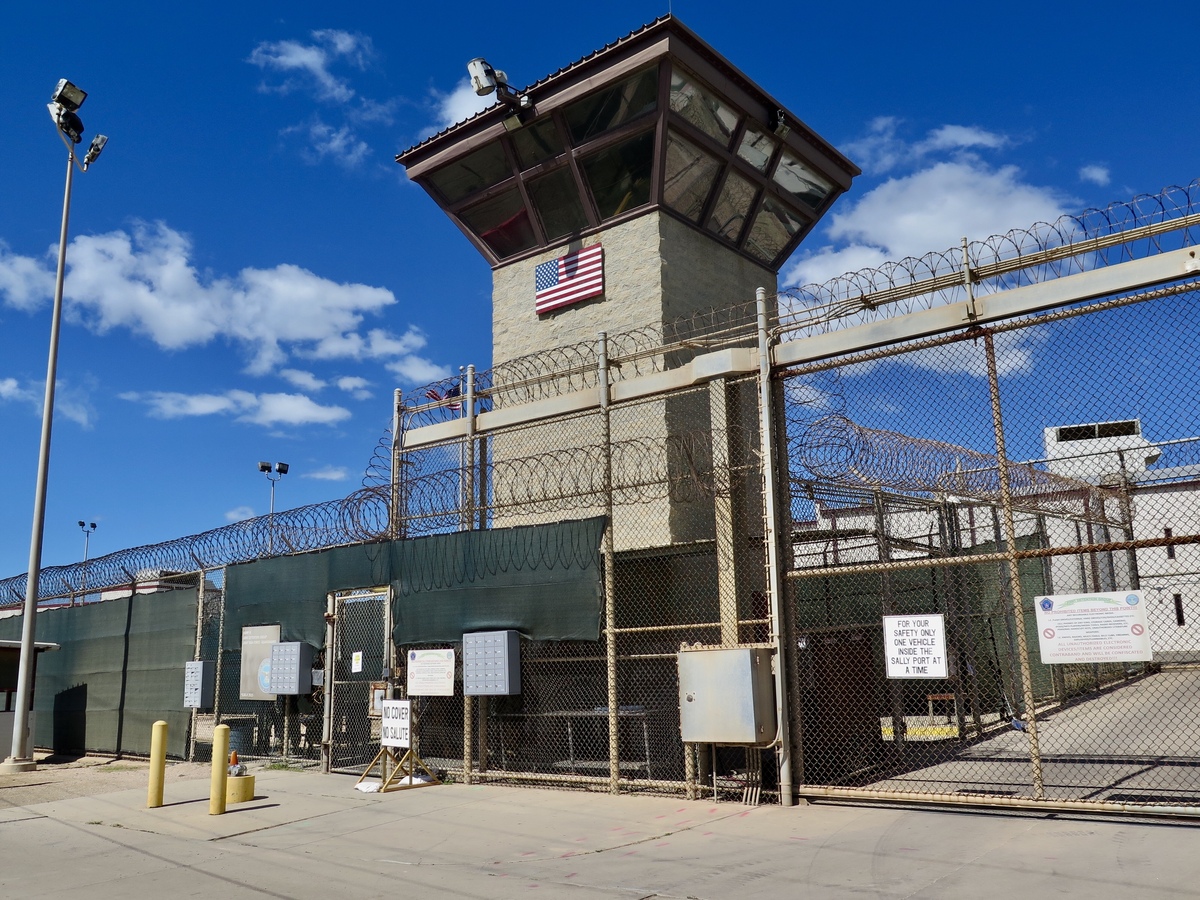 I'd seen these lockups from the outside several other times on what authorities there call "windshield tours." But I'd never set foot inside one of them.

Days before, President Trump had signed an executive order rescinding President Obama's 2009 directive to shut down the prison.

So this was a timely opportunity for U.S. journalists to see inside the offshore compound where around 1,700 military and civilian personnel are now employed to keep 41 men behind bars.

It was also a public relations occasion for the U.S. military — to put the best face possible on the United States' lengthy and controversial confinement of Muslim men deemed enemy combatants, most of whom have yet to be formally charged or tried.

"It's a beautiful day today for us, for the tour," spokeswoman Leanos calls out cheerily as our van leaves an abandoned air hangar on its way to what Leanos calls "Area of Operations Honor," better known as the prison camps. Packed inside are journalists from the United States, Colombia and Australia.

The Miami Herald's Carol Rosenberg, who's been chronicling the Guantánamo prison saga since its 2002 inception, observes that during both the George W. Bush and Barack Obama administrations, JTF commanders routinely declared their commitment to the "safe, humane, legal and transparent care and custody of enemy combatants" (italics added).

But Leanos omits "legal and transparent" as she begins our tour.

"The primary mission of Joint Task Force Guantánamo is the safe, humane care and custody of law-of-armed-conflict detainees," Leanos announces. 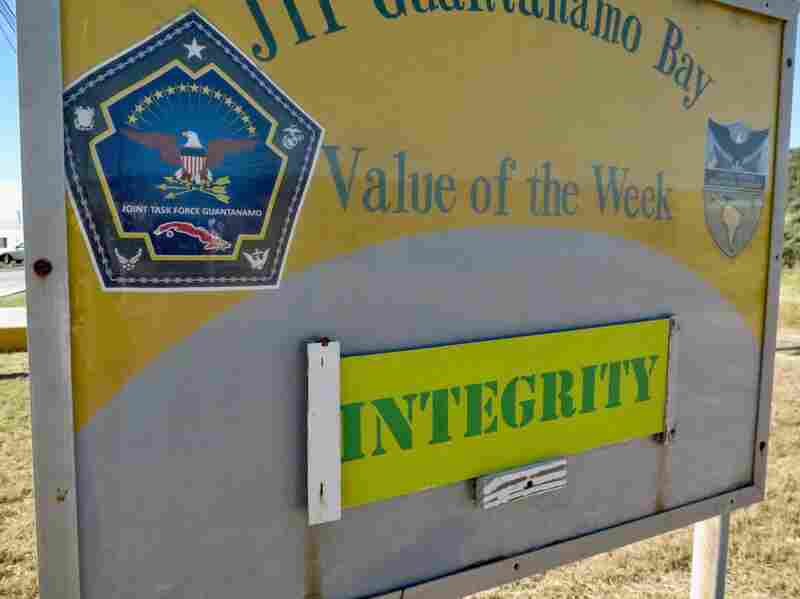 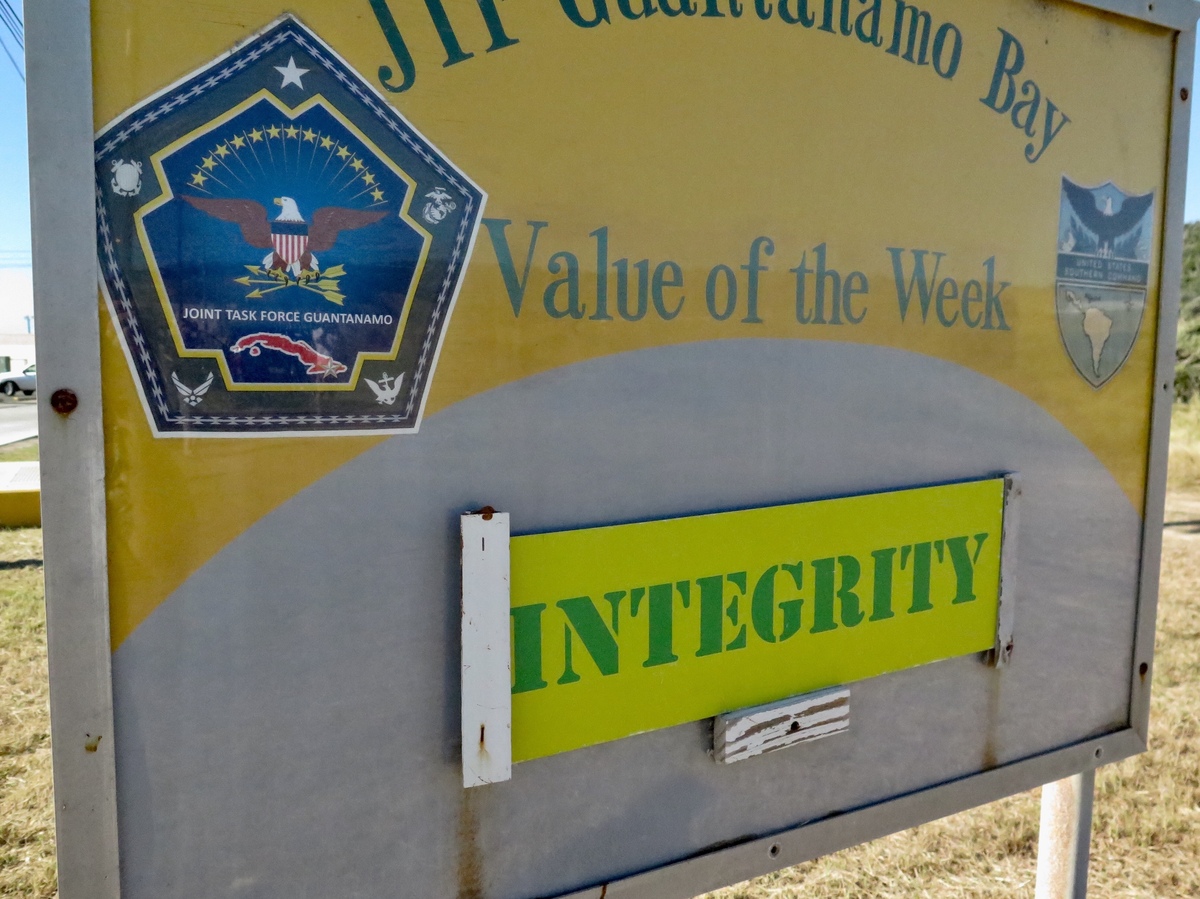 "Defend freedom!" she cries out to troops manning checkpoints as we drive into the prison camp zone. "This week the value of the week is 'integrity,'" she explains as we pass a roadside sign bearing the stenciled word "INTEGRITY."

Our first stop is a big metal shed where Jamaican and Filipino laborers are preparing meals for the inmates.

"We try our best to always make the food as close as possible to being Middle Eastern food," says the prison's Jordanian-born cultural adviser, who for security reasons can only be identified as Zak.

On the day's menu for lunch: beef stroganoff and tuna burgers.

Any hunger strikers? "Not that I'm aware of," replies the food operation's officer in charge, though he adds, "there's a couple that enteral feed occasionally."

Enteral — introducing liquid nutrition directly into the stomach and intestines — is more commonly known as force-feeding. The practice has been contested in U.S. federal courts. In past tours, according to Rosenberg, reporters were regularly shown the chairs with body straps used for force-feeding. They will not be shown on this tour.

On the road to the main lockup, signs are everywhere that what began as a provisional prison complex is now permanent. One former camp is being torn down to make way for new administrative offices. The main road is being torn up and replaced with a wider concrete thoroughfare.

And more Guantánamo construction is being planned. Congress recently authorized $115 million to build a barracks for more than 800 troops who've been living in shipping container-like trailers. It's a project Trump's chief of staff, John Kelly, has been promoting ever since the retired Marine general headed U.S. Southern Command during the last administration.

Another $69 million has been approved to replace a prison we won't see on this tour. It's Camp 7, a classified slammer whose very location within the base is a state secret. 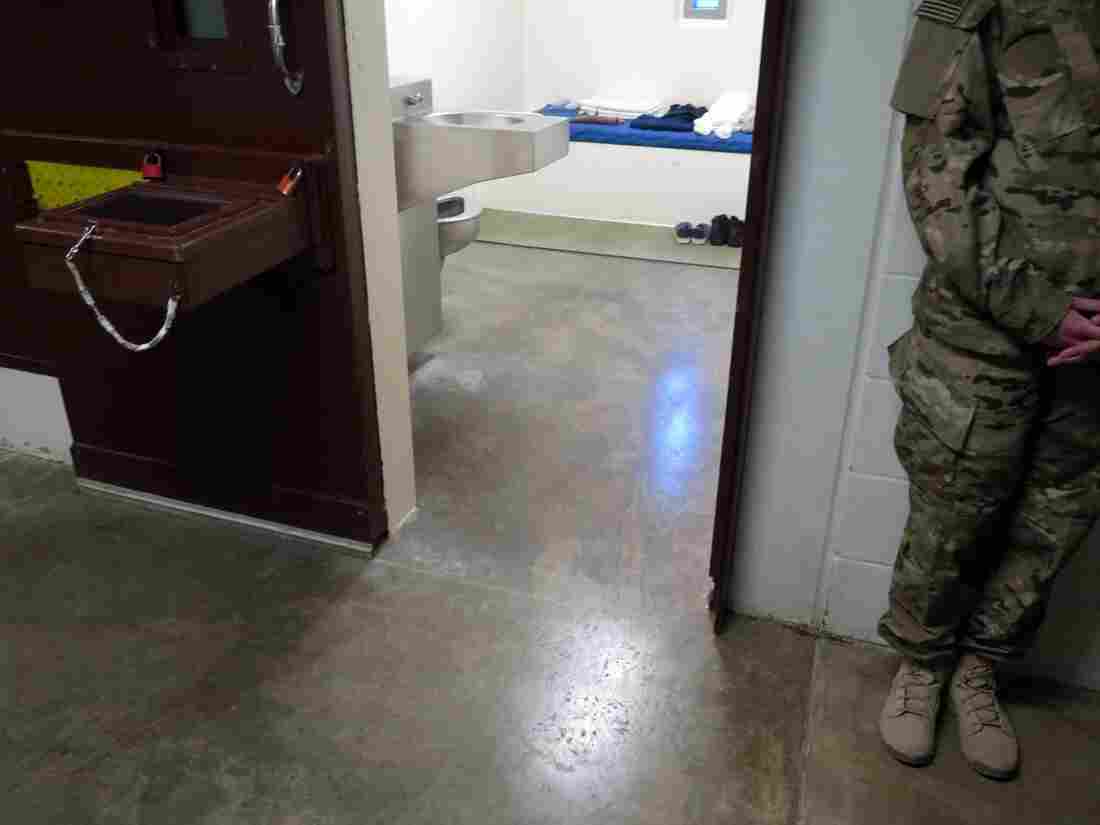 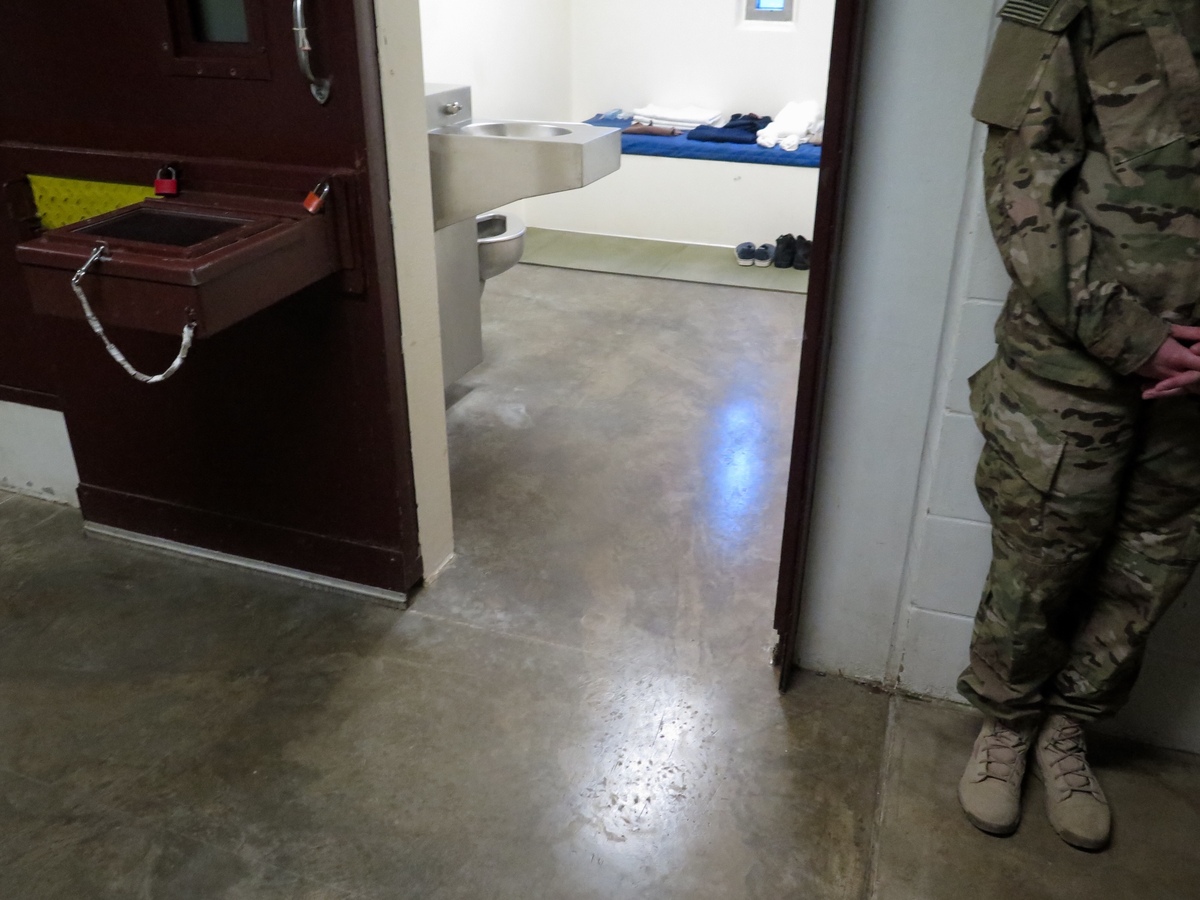 A U.S. military service member stands outside a prison cell at Camp 5. (Photo reviewed and cleared by U.S. military.)

The first prison we're let into is Camp 5. It's a state-of-the-art, maximum-security lockup built for $17 million in 2004 where past "noncompliant" inmates were confined to single cells 22 hours a day.

But there are no inmates in any of its 70 cells.

"Camp 5 is currently in a warm status," a prison official tells us. She identifies herself only as "S-5," the designation for a military police civil affairs officer.

"As with any military facility," says S-5, "it's our job to keep it up to speed, and so right now we're doing maintenance on it and we're doing renovations so that it better fits our needs."

A new $11.8 million medical clinic is part of Camp 5's renovations. It's in the final stage of construction, to replace an aging prisoner clinic and hospital at Camp Delta, a former prison lockup down the road.

A deputy commander of the military's Joint Medical Group, who also won't reveal his name, welcomes us to the nearly completed clinic with another upbeat message.

"The mission of the Joint Medical Group is the safe and humane treatment of the detainees," he says, "and the JMG does that mission flawlessly every day."

Flawlessly? During prior visits to Guantánamo, I had not heard that word used by officials to describe how they did their jobs, so I ask the deputy commander what he means.

"We flawlessly try every day to do our, the best, provide the best care we can to our patients," he replies. "I'm not claiming perfection, but I'm saying we try really hard."

The officer declines to describe what kinds of prisoner ailments and other health issues the medical group treats, nor will he say whether anyone is being force fed.

"We are able to provide medical care to the extent practicable," he says, "which is equivalent to the care that a trooper or a member of the United States armed forces would get."

In the cells converted into exam rooms, there are fist-size doughnut-shape metal bolts attached to the floors — they're for attaching patients' ankle shackles. Spokeswoman Leanos tells us they cannot be photographed.

"That is something that's considered a security protocol, restraint systems," she says, "so it's something we covered in the ground rules."

Rosenberg tells us this ban on taking pictures of the restraint bolts is another new restriction for journalists at Guantánamo. A photo of the device installed in a Guantánamo sick bay taken by a U.S. Army sergeant was, in fact, posted online five years ago and remains there today.

A glimpse of the prisoners

Camp 6 is our final tour stop. Completed in 2006, it's a medium- to maximum-security slammer with 176 cells. Camp 6 is where most of the prisoners not at Camp 7 — perhaps two dozen — have been held since Camp 5 was decommissioned in August 2016. The prison has communal areas in its eight cell blocks, and it also has an art studio popular with the inmates that Rosenberg says was routinely shown to reporters in past tours.

But we won't be seeing the art studio on this tour.

There's been a crackdown on prisoner-produced art after some 200 pieces were taken to the U.S. by inmates' lawyers. Some were exhibited last fall at New York's John Jay College of Criminal Justice.

"The Department of Defense issued a policy," spokeswoman Leanos explains, "that detainee artwork will no longer leave the island." Later, Rear Adm. Edward Cashman, who commands the entire prison operation, tells us some prisoner artwork is now being destroyed.

"It's disposed the way that I think most things are disposed," he says. "Things are shredded, thrown away, whatever, if necessary."

We are told to refrain from any interaction with the inmates at Camp 6. There's really no chance anyhow for that to happen.

Those we do see can only be glimpsed through foggy one-way glass in their cell block's communal area. We are allowed to covertly photograph them for 12 minutes as some nap and others add spices to the lunches they've been delivered.

"The majority of the detainees here in Camp 6 are highly compliant," a new military minder tells us. "We like to keep it that way, and we think it's in large part due to the professional job our forces are doing here."

Out in the prison yard at the end of the tour, the Miami Herald's Rosenberg gets a public dressing down from spokeswoman Leanos for some outdoor photos she'd taken earlier. "There were to be no photos" outside the first prison block, Leanos tells her.

Rosenberg, who's been banished before from Guantánamo, is taken aback.

"So am I banned for life? I mean, it wasn't an intentional violation," she says. "Every photo I take is submitted — if I misunderstood a rule, that is a big surprise to me."

"It's not that you misunderstood, Carol," Leanos replies. "It appears your conduct is that you choose not to listen."

The sour end to the tour suggests there may be another new message for reporters who venture down to Guantánamo: Not only will your photos become government property until they pass military censors — you may also be disciplined for simply taking them.