Accessibility links
Venezuela's Deepening Crisis Triggers Mass Migration Into Colombia : Parallels A downward economic spiral, food shortages and a host of other problems have driven thousands of Venezuelans to flee to nearby countries. 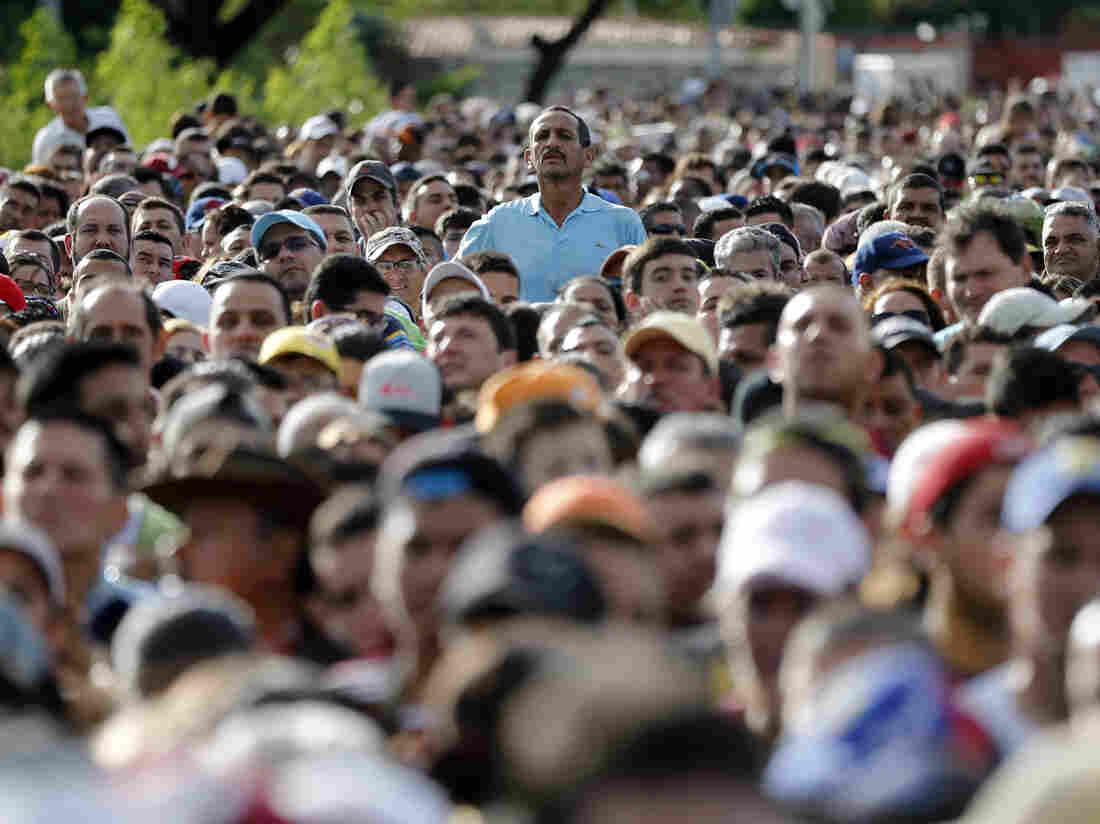 A crowd waits to cross the border into Colombia over the Simón Bolívar bridge in San Antonio del Táchira, Venezuela, in July 2016. Ariana Cubillos/AP hide caption 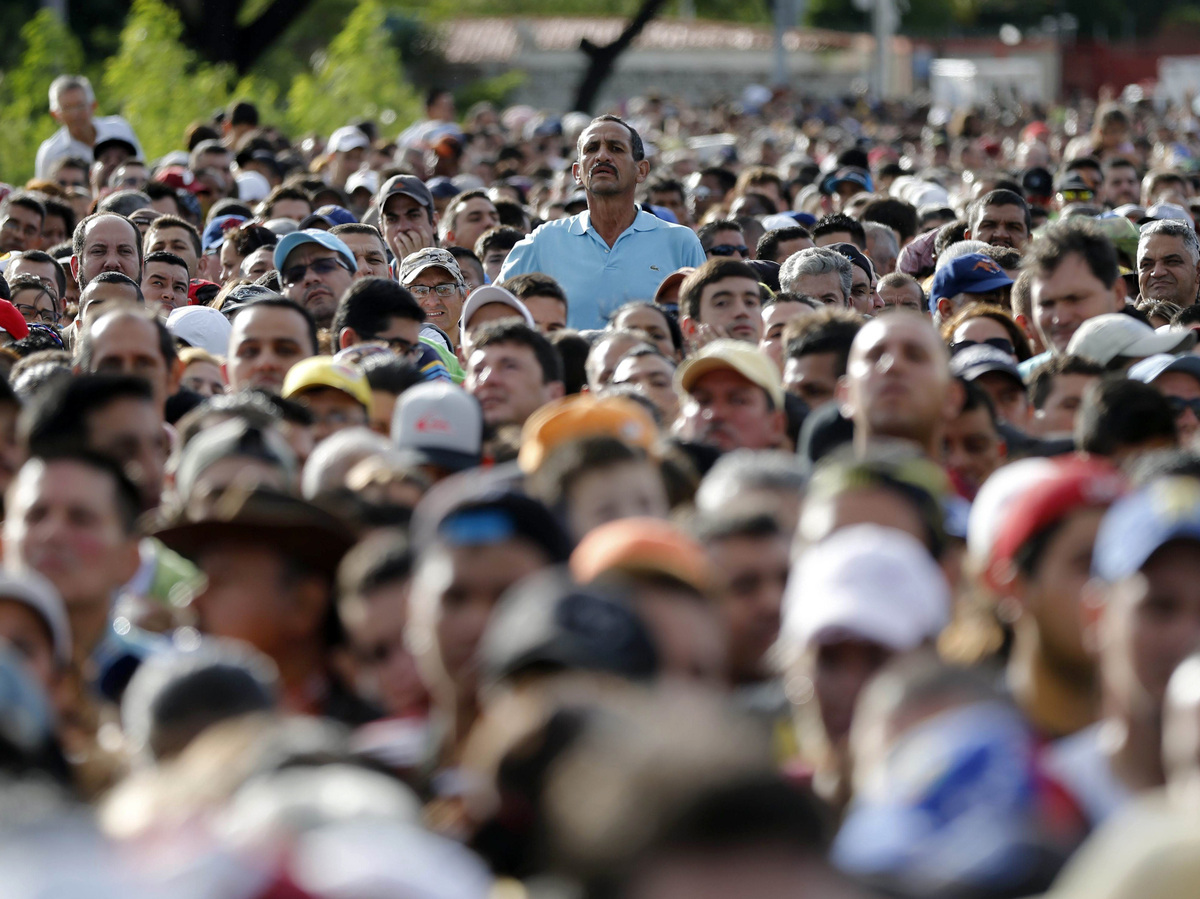 A crowd waits to cross the border into Colombia over the Simón Bolívar bridge in San Antonio del Táchira, Venezuela, in July 2016.

Venezuela's downward economic spiral has led to widespread food shortages, hyperinflation and now mass migration. Many Venezuelans are opting for the easiest escape route — by crossing the land border into Colombia.

There were more than half a million Venezuelans in Colombia as of December, according to the Colombian immigration department, and many came over in the last two years. Their exodus rivals the number of Syrians in Germany or Rohingya in Bangladesh. Ian Bremmer, president of the Eurasia Group, a political risk consulting firm, calls it the world's "least-talked-about" immigration crisis.

But Colombians are taking notice. In fact, President Juan Manuel Santos is asking for international aid to cope with the large numbers of immigrants, many of whom are impoverished, hungry and desperate.

"I appreciate the offers of financial and other aid from the international community," Santos said last week. "We need it because unfortunately this problem gets worse day by day."

Santos suggested that the crisis will last as long as Nicolás Maduro, Venezuela's increasingly authoritarian president, remains in power. His socialist economic policies have led to a collapse of the local currency and inflation expected to hit 13,000 percent this year, according to the International Monetary Fund. Still, Maduro is widely expected to secure another six-year term in the April 22 election, in part, because the most popular opposition candidates have been banned from running.

Earlier this month, Santos announced measures to tighten the border but the immediate result has been a spike in new arrivals as Venezuelans rush to cross the frontier before the new rules take hold. Families clog the bridge spanning the Táchira River, the busiest border crossing between the two countries, as they push baby strollers, carry boxes and drag roller luggage into Colombia.

For many, their first stop comes a few feet inside Colombian territory, in the Norte de Santander region, where they unload their jewelry to dealers who purchase precious metals. At one shop, newcomers pull off their rings and unpin their brooches and necklaces. Workers use files and acids to check the purity of the metal. Then shop owner José Alvarado negotiates prices.

He offers the equivalent of about $7 for a woman's silver bracelet and $275 for a man's gold ring, but he rejects a watch for its dubious quality. A Venezuelan who fled his homeland two years ago, Alvarado says he understands what his compatriots are going through. He says the most heartbreaking case was a couple that sold their wedding rings after 40 years of marriage.

"People cry a lot when they sell their jewelry. But they have no choice," he says.

Indeed, Venezuelans need the cash as they travel deeper into Colombia or journey south to Ecuador, Peru, Chile and Argentina.

On the border bridge, several Venezuelans employed by Colombian travel agencies hawk bus tickets. Passage to Lima sells for $241, while Buenos Aires costs twice as much. These freelance agents live on the Venezuelan side of the border and say they too want to get away. But lacking money and passports, they can only dream about the destinations they are trumpeting. 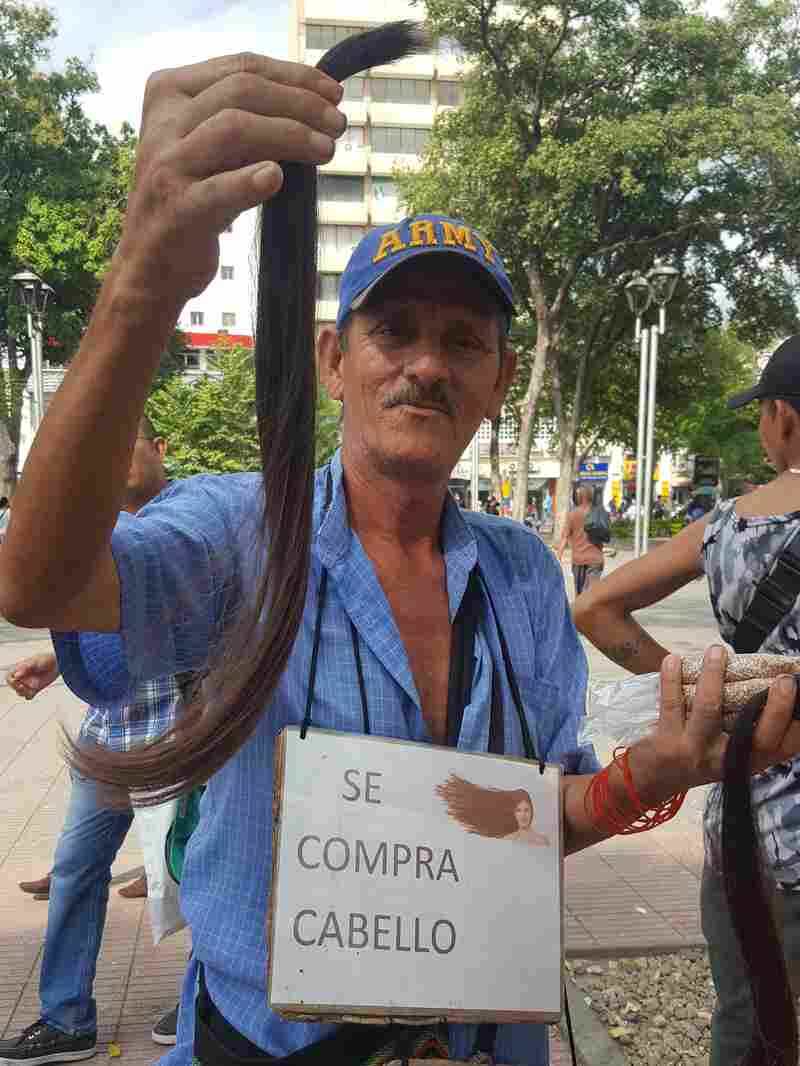 All sorts of businesses have sprouted in Cúcuta, Colombia, around the Venezuelan immigration boom. This man is looking to buy locks of hair to be used for hair extensions. John Otis for NPR hide caption 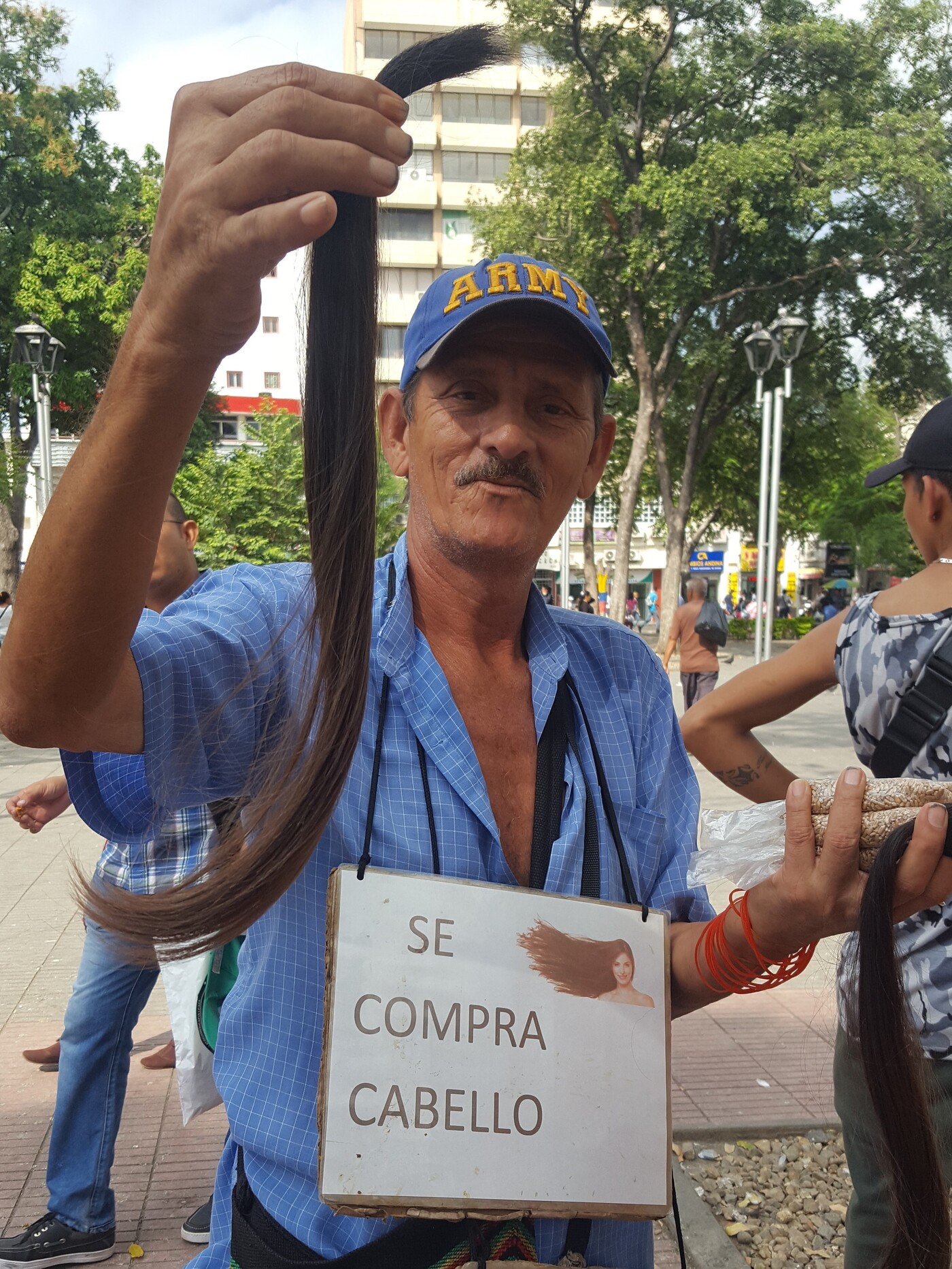 All sorts of businesses have sprouted in Cúcuta, Colombia, around the Venezuelan immigration boom. This man is looking to buy locks of hair to be used for hair extensions.

A few miles up the road, in the Colombian border city of Cúcuta, a new business has sprung up to take advantage of the crisis. In the city plaza, hair dealers are looking for clients to sell them locks for making hair extensions. They wear signs around their necks stating, "we buy hair," and shout out the same message.

Nearly all their customers are penniless Venezuelans, including Jefferson Márquez. He arrived two days ago from the Venezuelan city of Mérida with the hair of his 14-year-old cousin in a plastic bag. He sells it for about $4, which he plans to send back to his family.

Another potential vendor is Karelis Nieves. She worked at a supermarket in the Venezuelan city of Maracay but says the business collapsed after it was expropriated by the government. Nieves, 23, came to Colombia last month and is trying to scrounge up money to support her parents and 2-year-old daughter back home. But the hair broker requires locks that are at least a foot-and-a-half long. After pulling out his measuring tape, he informs Nieves that her flowing brown hair is a few inches too short.

There are other ways to get by, including selling street food, working construction and busking.

Street musician Jesús García says he fled to Colombia four months ago. Due to the collapse of Venezuela's currency, his salary as a mechanic on an oil rig was no longer enough to feed his family of four. Masterly on the harp, García has teamed up with a Venezuelan guitarist and the duo plays Venezuelan folk music, called llanero. The spare change people toss into their open guitar case adds up to about $10 a day — more than García made for a week's work in Venezuela.

But others resort to prostitution or street crime to survive, says Carlos Luna, head of the Cúcuta Chamber of Commerce. In addition, he points out that throngs of Colombians who moved to Venezuela during that country's periodic oil booms — or to escape from violence during Colombia's long-running guerrilla war — are now returning.

Luna says Cúcuta must not open refugee centers because he says they would only attract more Venezuelan migrants and exacerbate the problem. However, churches and charities now run a few soup kitchens and shelters where migrants are allowed to stay for 48 hours until they move on to their next destination.

One of the kitchens near the border bridge serves 1,000 lunches per day, including today's meal of chicken and spaghetti. Among the diners is Danny Márquez, who arrived the day before. He used to run a thriving business selling cleaning supplies in Venezuela. But the economic crisis drove him bankrupt. He used to be solidly middle class and is clearly distraught at having to ask for food.

"This is the first time in my life that I've set foot in a soup kitchen," says Márquez, who has tears in his eyes.

He plans to resettle in Chile. But Márquez is bitter about having to abandon his homeland.