Accessibility links
Anti-Migrant Slogans Are Overshadowing Italy's Election Race : Parallels Far-right parties are campaigning for the March 4 elections, and they're not the only ones heightening the rhetoric against foreigners. 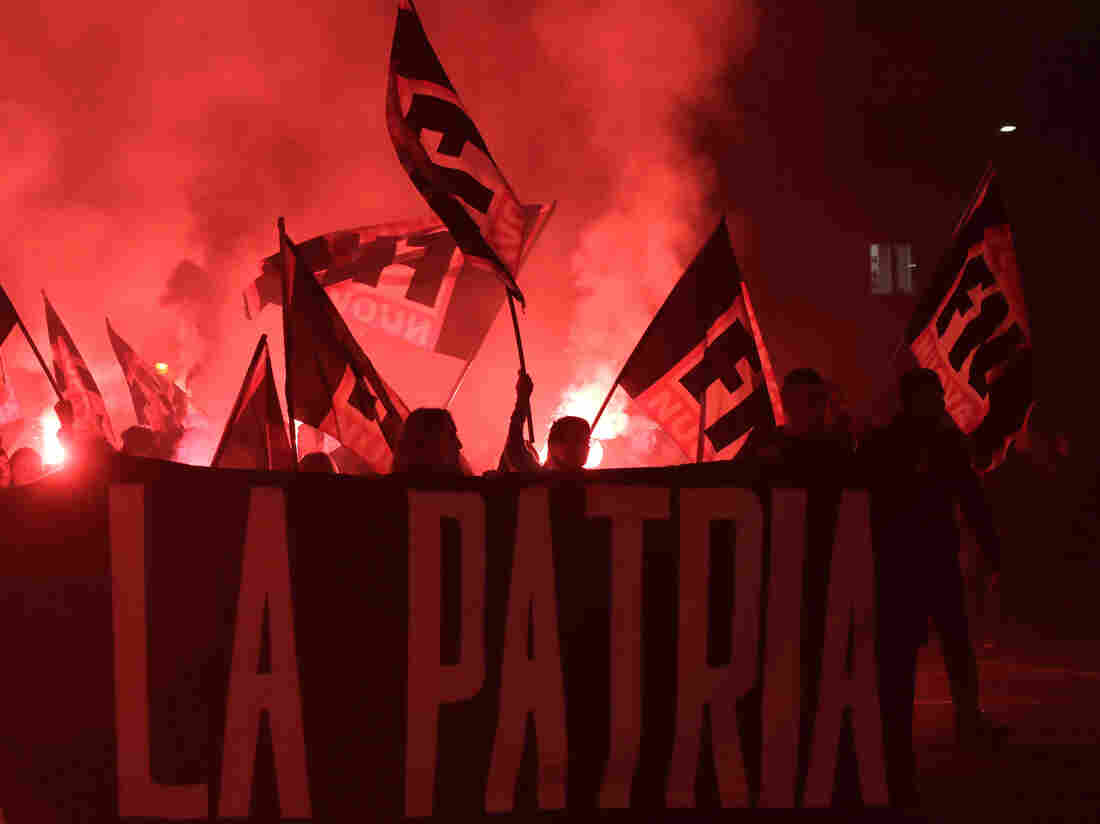 Italian far-right party activists hold a banner reading "fatherland" during a demonstration against a government proposal to reform citizenship procedures for the descendants of immigrants living in Italy, in Rome, Nov. 4, 2017. Alessandra Tarantino/AP hide caption 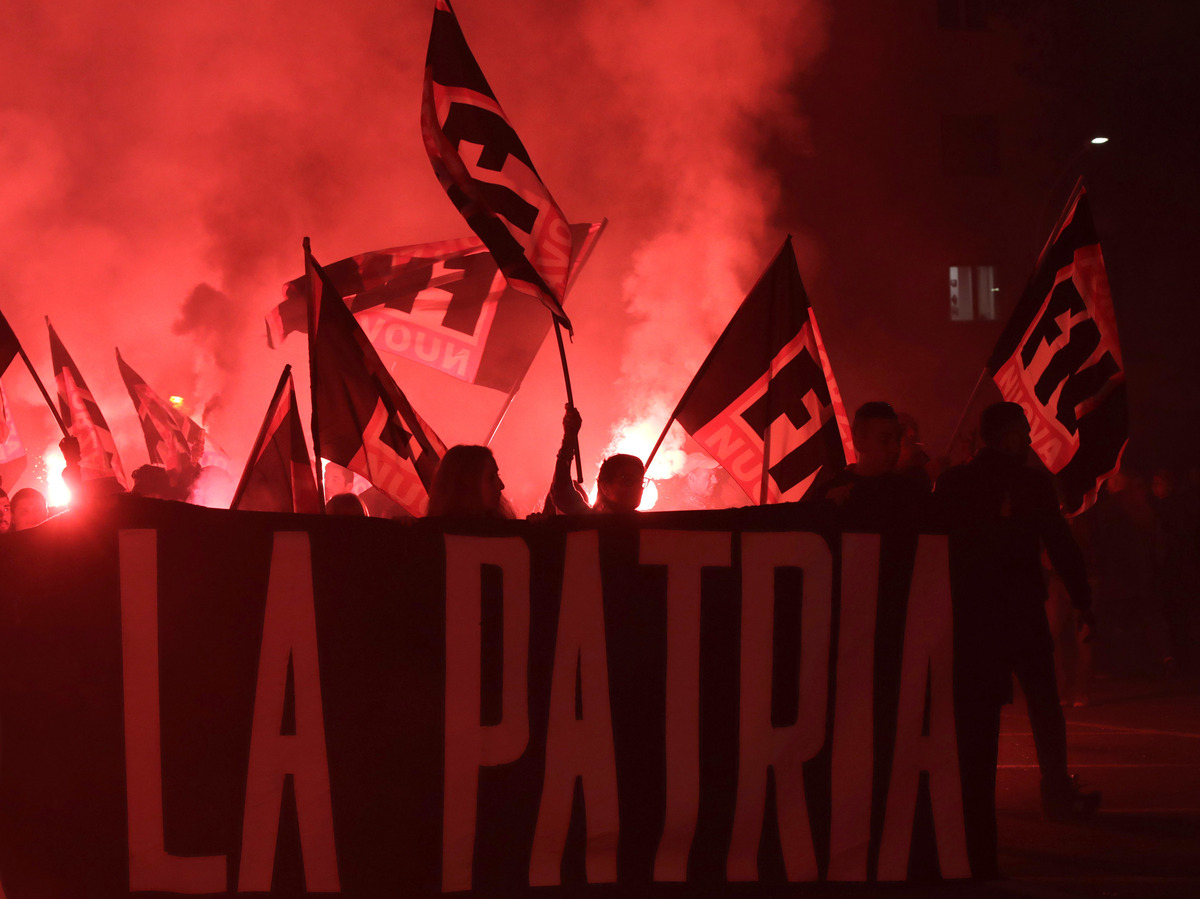 Italian far-right party activists hold a banner reading "fatherland" during a demonstration against a government proposal to reform citizenship procedures for the descendants of immigrants living in Italy, in Rome, Nov. 4, 2017.

A satirical movie that envisions dictator Benito Mussolini staging a comeback opened in Italy just as the campaign for March 4 general elections was getting underway. It has received rave reviews.

The mockumentary I'm Back is an Italian version of the 2015 German film, Look Who's Back, which envisioned the return of Adolf Hitler.

In a country that has never come to terms with its fascist past, the Italian movie is seen as a warning shot as populism and racism taint the campaign.

The film opened in a national climate of widespread unease over the arrival by boat of more than 600,000 mostly African migrants in the last four years.

In one scene, the dictator is guest of honor on a TV celebrity show. The host asks, "Duce, how does Italy look now?" Wearing jackboots and military garb, his chin jutting forward, the Mussolini look-alike replies, "it's like Rhodesia, Congo or Nigeria." When the audience laughs, he fires back, "You won't find it so funny when an African steals your job."

Luca Miniero, the movie's director, told the daily La Repubblica, "I'm convinced that if Mussolini were to return today, he'd win the elections, except that he'd see his government fall after two years."

In the real Italy, the latest polls favor a right-wing coalition — headed by one man trying to make a political comeback, former Prime Minister Silvio Berlusconi.

Italians thought they'd seen the last of the 81-year-old media tycoon — disgraced by sex scandals and court trials — since his tax fraud conviction bars him from running for office. Now, he aspires to be kingmaker.

Berlusconi "is the only one who has been able to put this together," says Roberto D'Alimonte, professor of political science at Rome's Luiss University, "to create [a] coalition among strange bedfellows, the various segments of the Italian right."

The coalition includes the League (formerly known as the Northern League), headed by Matteo Salvini. Salvini is anti-European Union, wants to legalize brothels and pledges to deport all undocumented migrants — whose arrival he blames on what he considers the lax immigration policies of the outgoing center-left government.

Many observers say the use of racist campaign slogans has reached new levels and is encouraging violence.

The migrant issue became even more explosive after a right-wing extremist shot and wounded six migrants from countries including Ghana, Mali and Nigeria, in the town of Macerata, in central Italy, earlier this month.

The suspect — who has a Nazi tattoo on his forehead — claimed he acted in revenge for the murder of an 18-year-old Italian woman whose suspected killer is Nigerian.

League leader Salvini was quick to say, whoever shoots people goes to jail, but added that uncontrolled immigration leads to social conflict.

"Those who allowed hundreds of thousands of phony refugees, and real criminals to land here, are morally responsible for acts of violence committed in Italy," Salvini said.

Official statistics show the crime rate by noncitizens in Italy is lower than that of Italians.

The League's escalating racist rhetoric poses problems for Berlusconi, says analyst D'Alimonte. "He wants to appear as the moderate leader and he cannot go too far in following the League down the path of chastising immigrants," he says.

And yet, in a TV interview after the shooting, Berlusconi did exactly that.

"Those 600,000 migrants who are here are a social bomb, ready to explode because they live on expediency and crime," Berlusconi said.

Emma Bonino, a veteran human rights activist running on a pro-EU slate with the center-left coalition, also warns of dangers posed by that kind of statement.

"Violence is violence, it can never, never, never be excused," she said. "Leaders and media should be careful in not fueling this sentiment, and it is exactly the opposite that is happening."

The drive-by shooting in Macerata was only the latest in a series of attacks carried out by right-wing extremists. For the last five years, the Interior Ministry has recorded an average of one attack by a neofascist group per week, according to L'Espresso newspaper.

Small, ultra-right-wing parties such as Casa Pound and Forza Nuova are also campaigning for the March 4 elections.

This raises the specter that, for the first time since the 1945 fall of Mussolini's dictatorship, lawmakers who openly embrace fascism could be back in the Italian parliament.