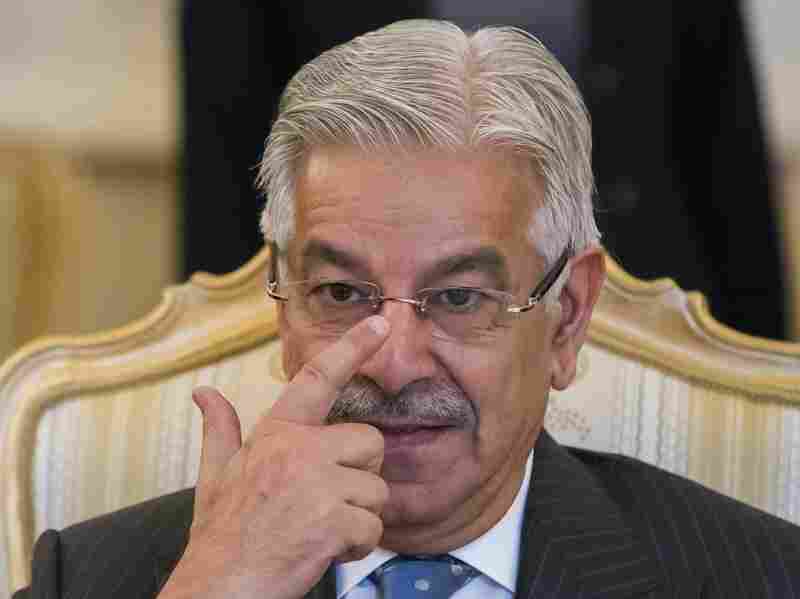 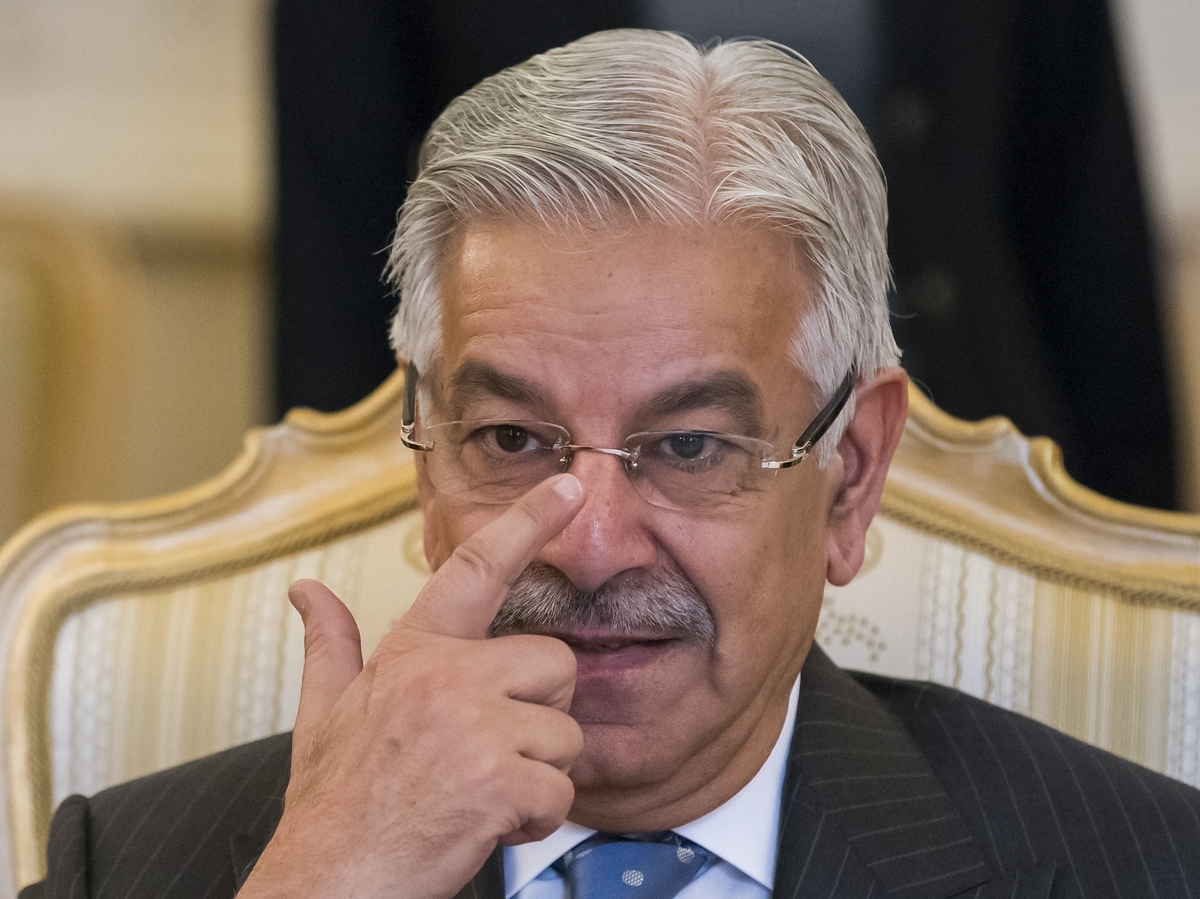 Pakistan says it has avoided landing on a list of global terror funders, despite efforts by the United States and Western allies.

The Financial Action Task Force, a global group against terrorism financing, was convened this week in Paris at the request of Western powers seeking to add Pakistan back on its terror-finance watch list.

But Pakistan's Foreign Minister Khawaja Asif said in a tweet late Tuesday that "our efforts paid" off — the task force reached "no consensus" and proposed a three-month pause.

"Grateful to friends who helped," he wrote.

Our efforts paid,FATF Paris 20Feb meeting conclusion on US led motion to put Pakistan on watch list
-No consensus for nominating Pakistan
-proposing 3months pause &asking APG for another report to b considered in June الحمداللہ
Grateful to friends who helped

The FATF was scheduled to meet through Friday and has not yet publicly announced any decision. U.S. officials and task force members did not immediately respond to requests for comment.

In August, Trump outlined his new strategy for the war in Afghanistan. Then, Trump accused Pakistan of offering "safe haven to agents of chaos, violence and terror." Trump's first tweet of the New Year criticized Pakistan for giving the United States what he called "nothing but lies & deceit." Days later, Washington announced it was suspending most of its military aid to Pakistan.

Pakistani officials denied they sponsor militant groups. They pointed to their years-long fight against terrorist groups.

The United Kingdom co-submitted the request for the task force to punish Pakistan, and France and Germany supported the move, according to two Western diplomats who spoke on condition of anonymity, because of the matter's sensitivity.

Their move suggested growing Western impatience with Pakistan — not just the U.S., said Khurram Hussain, a columnist for Dawn, a Pakistani newspaper.

"There's a lot of frustration building up around the world, it's many years in the making," Hussain said. "The government has been postponing, and kicking the can down the road on this decision," he said, referring to a comprehensive cleanup of militant financing.

Diplomats said the goal was to add Pakistan to what's called the "gray list." That would add extra obstacles for Pakistan to obtain loans from international markets. They said it would also deter international investors from Pakistan. It also worsens Pakistan's reputation for business.

Pakistan only recently emerged from the task force's gray list — it was added in 2012 and removed two years later. And the country has suffered other financial censure. Hussain reported in August that U.S. regulators fined the country's largest bank $225 million, accusing it of handling funds that belonged to militants.

Ahead of this week's meeting, Pakistani diplomats furiously lobbied China, Turkey and Russia not to support placing Pakistan on the watchlist, which requires consensus, according to local media.

In early February, Pakistani President Mamnoon Hussain issued an ordinance that allowed the country to act against any group outlawed by the U.N. Security Council — an apparent effort by Pakistan to avoid landing on the task force's list.

That triggered a broad crackdown. Pakistani authorities seized control of schools, clinics, ambulances, mosques and seminaries belonging to Muslim charities, upturning services to many of the country's poorest citizens.

The authorities went after two charities linked to a radical Muslim cleric, Hafiz Saeed, who is wanted by the U.S.

Saeed is the founder of a militant group that's blamed for the 2008 Mumbai attacks that killed 166 people, including American citizens. A Pakistani court released Saeed from house arrest in November.

This is a diplomatic coup for #Pakistan. But it only gets a reprieve; will need to pull off another one in 3 months. https://t.co/yO3rHyNCSH

Pakistan may have won over other countries with this month's operations, analysts said. Yet Western diplomats speaking anonymously said Pakistan had conducted similar operations in the past, only to quietly back off once the pressure passed.

"This is a movie that we've seen so many times," said Michael Kugelman, South Asia senior associate at the Wilson Center, who echoed the views of diplomats who spoke anonymously.

"Typically what happens is that after a while you basically have new charitable groups that are formed with different names," he said. "They are allowed to operate freely, until there's pressure anew on Pakistan to take action against these charities." 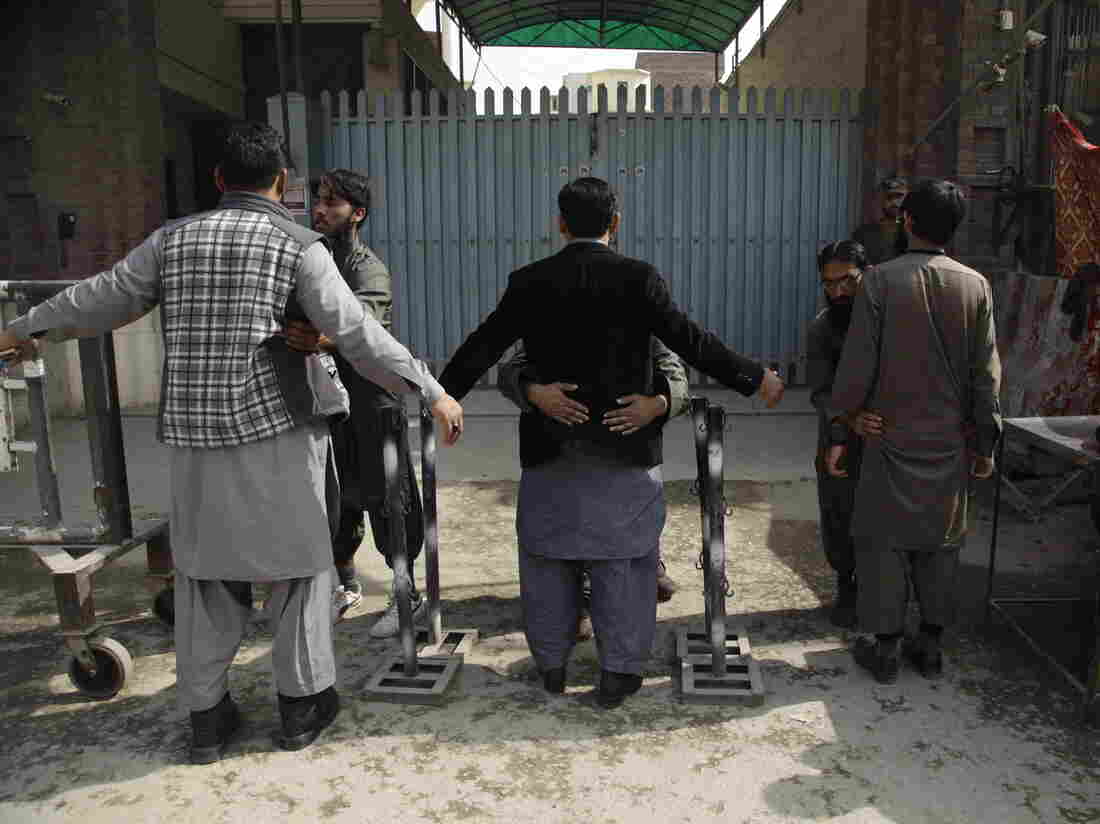 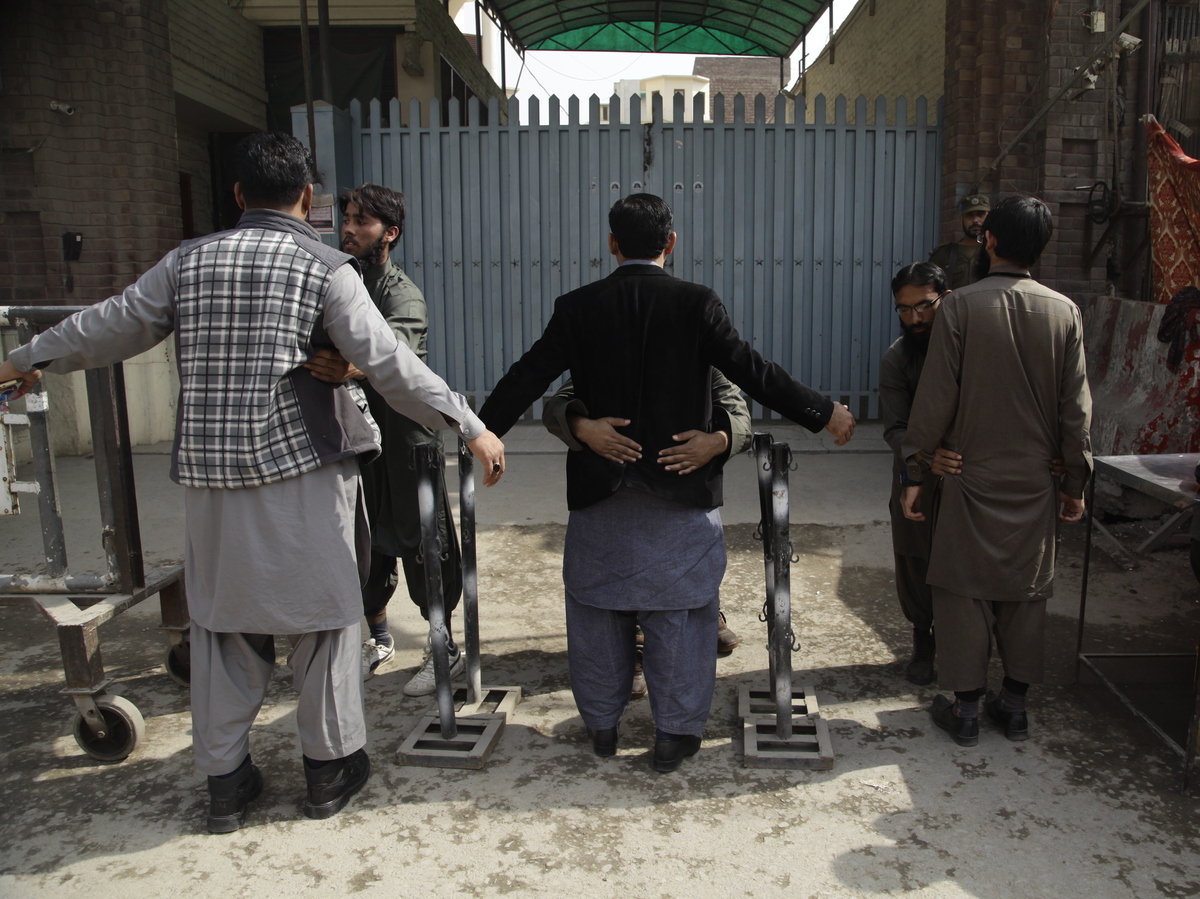 Loyalists of outlawed charities in Pakistan pat down worshipers before Friday prayers.

When NPR went to investigate how and where the crackdown was happening, it was not immediately clear how many institutions Pakistani authorities had seized or if the government replaced any of their staff.

On a recent day in his headquarters off a dusty highway in Lahore, Ahmad Nadeem, the deputy spokesman of the two charities, gestured to cream-painted buildings around him. The gift shop was still open. The administration was taken over by civil servants. The charities still controlled the mosque. They expected a government-appointed preacher to take over soon.

Nadeem told local media that the charities had treated more than 1.8 million patients, including distributing food to patients in government hospitals. The charities' possessed eight hospitals, more than 250 small medical clinics, dozens of ambulances and over 150 educational institutions. 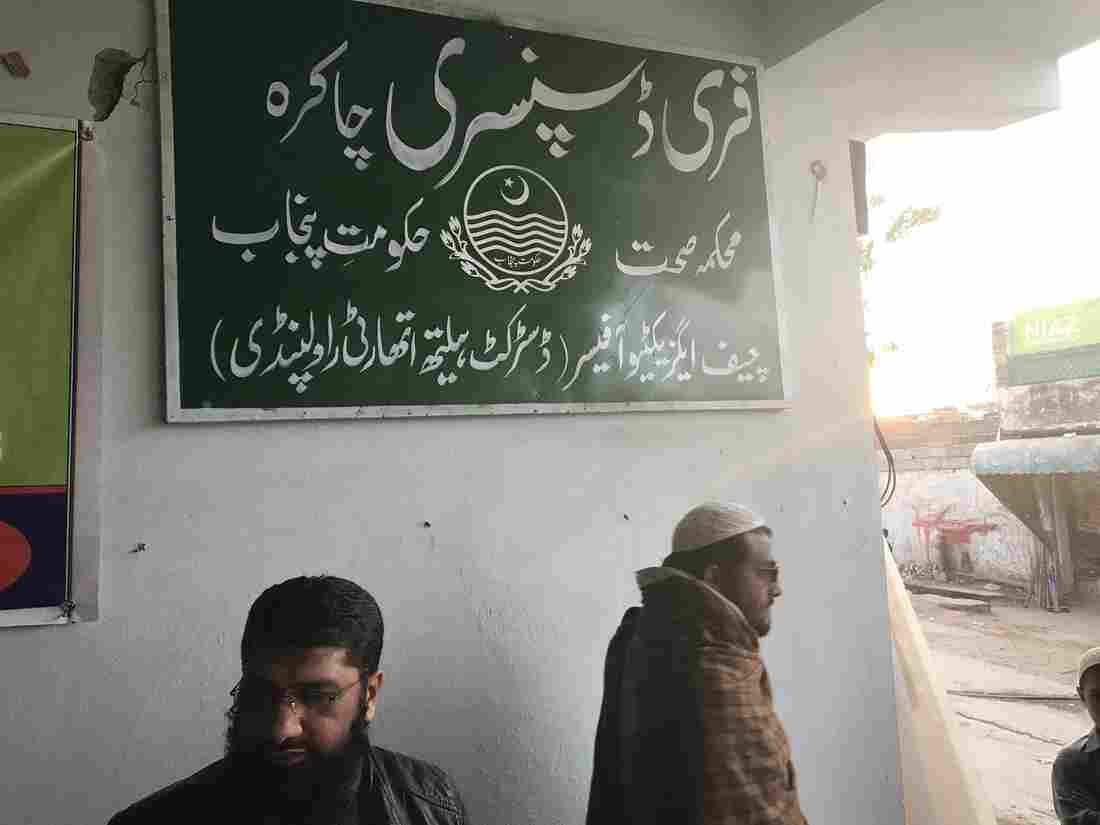 A sign indicates that this Pakistani clinic once operated by a charity is now government-run. Diaa Hadid/NPR hide caption 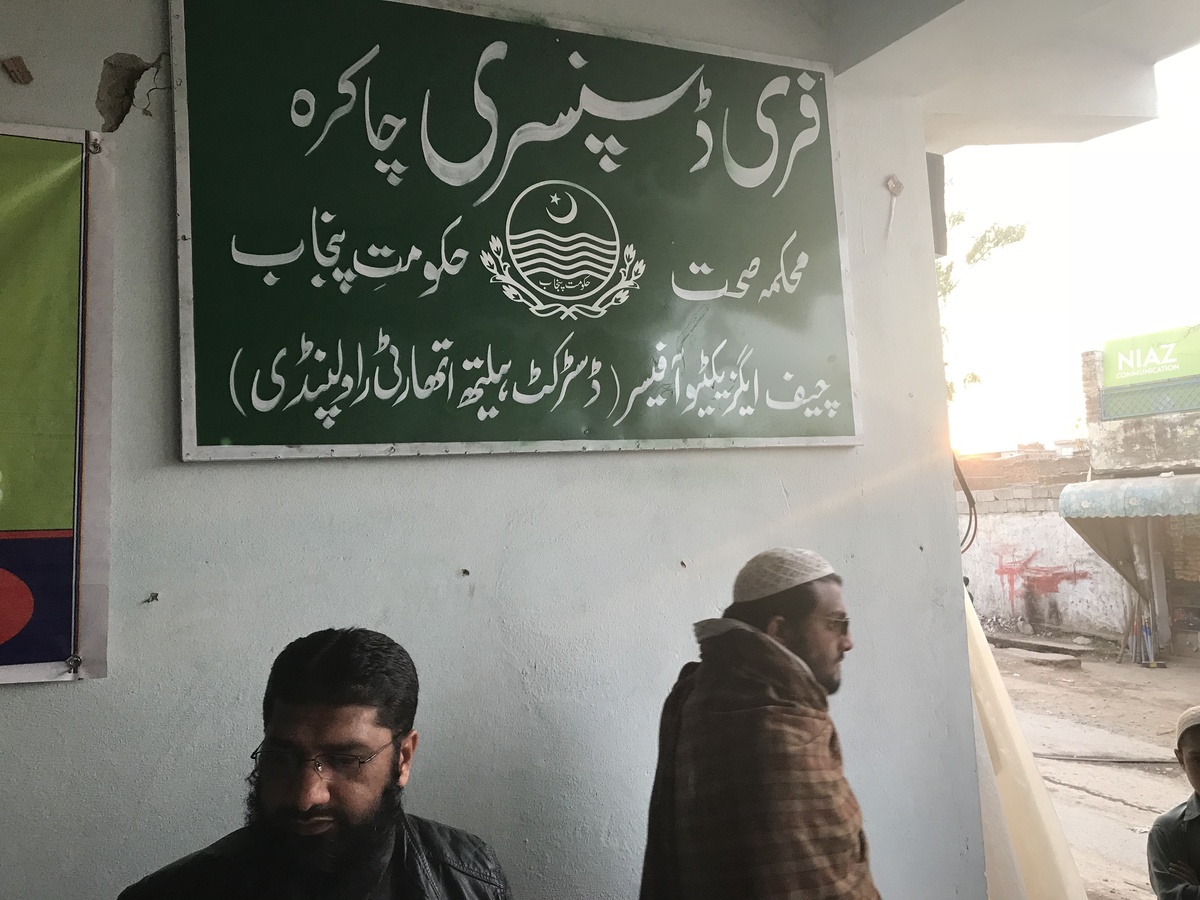 A sign indicates that this Pakistani clinic once operated by a charity is now government-run.

On the outskirts of Rawalpindi, a working-class city next to the capital Islamabad, a clinic in a bare-bones concrete structure had just been taken over. A freshly painted green-and-white sign announced it was now a government clinic.

Mothers and fathers holding crying babies and young children milled around, trying to see a doctor. But the charity's doctor had stopped coming to work — and the government-appointed physician hadn't turned up.

Instead, Mohammed Soleiman, 24, a clinical assistant hired by one of the outlawed charities, was helping out.

He hoped the crackdown wouldn't last — but it had to, at least for another three months, until Pakistan survives another round of the global task force's scrutiny.