Accessibility links
Israel Gives African Asylum-Seekers A Choice: Deportation Or Jail : Parallels Israel's plan to force African migrant men to choose between voluntarily leaving — with a $3,500 stipend — or be deported or jailed has sparked a backlash. 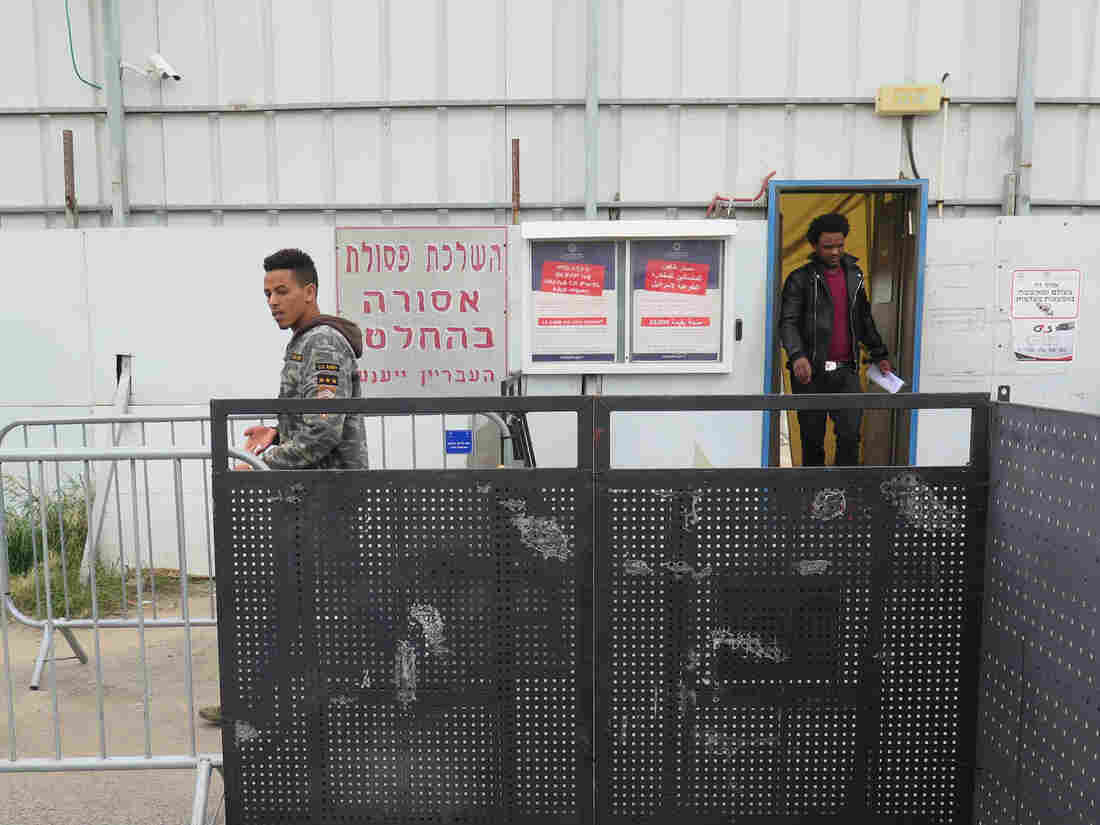 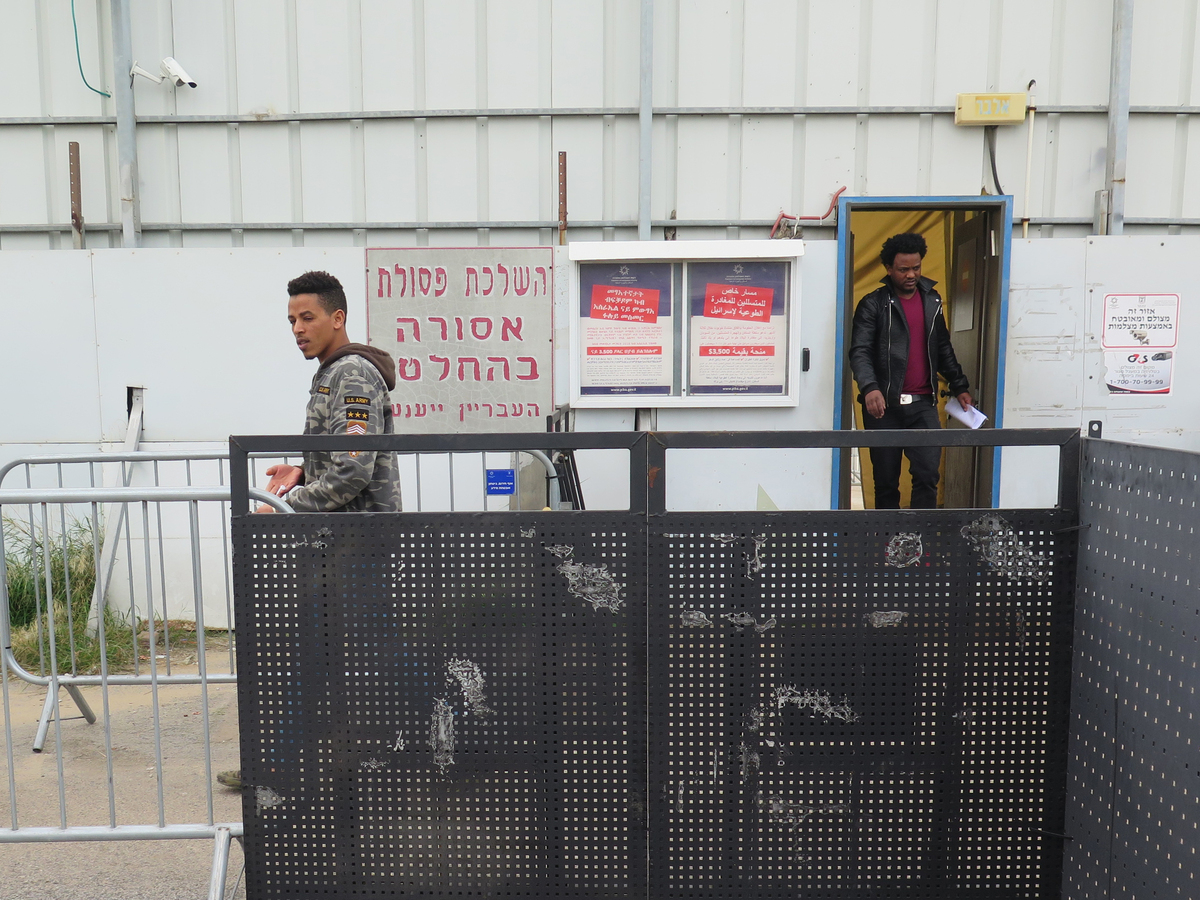 Take $3,500 and a one-way ticket to Africa by April, or face forced deportation or jail.

This is Israel's new plan for thousands of East African migrants, mostly from Eritrea and Sudan, who crossed the Sinai Desert into Israel over the last decade.

The policy, announced Jan. 1, has sparked panic among migrants, who say they took perilous journeys to Israel seeking refuge from hardship, and it has been criticized by the U.N. Refugee Agency. The issue has also renewed an emotional debate among Israelis about whether their country owes the migrants safe haven.

Not all of them are being deported. Women, children, families and those with pending asylum requests submitted before 2018 get to stay, Israeli authorities say. It's single men who Israel claims are economic migrants who are receiving deportation notices. Some of the men had their asylum bid rejected. Others never submitted one.

About 34,000 African migrants are in Israel today. Some bear the scars of abuse and torture by Egyptian Bedouin smugglers in Sinai on their way to Israel. Many tell stories of escaping war in Darfur, or compulsory military service in Eritrea that often conscripts men for decades.

For years, the Israeli army took them in as they crossed the desert border by foot. They were loaded onto buses and taken to Tel Aviv. Today work as janitors and street cleaners, or cooks and dishwashers in Tel Aviv's trendy restaurants and cafés.

They consider themselves asylum-seekers and refugees. But Israel's official term for them is "infiltrators," having crossed the border illegally. Israeli officials argue the overwhelming majority are economic migrants who came to Israel in search of work, are a burden on society and threaten the country's Jewish character.

Migrant advocates argue they only make up less than half of a percent of Israel's population and that they are being targeted for their skin color. They are also an important part of the country's workforce, performing many jobs Palestinians used to do before a wave of Palestinian violence led Israel to curb Palestinians' work permits.

One recent morning, Eritreans and Sudanese lined up in a dusty lot outside an immigration office. The earliest ones arrived at 4 a.m. One by one, some walked out with a colorful flyer requesting their "voluntary departure," and a letter.

"Greetings," the letter begins. "We would like to inform you that Israel has signed arrangements allowing you to leave Israel to a safe, third-party country that will welcome you and give you a residence permit that will allow you to work in the country and ensure you are not expelled to your home country."

Those who self-deport within the grace period will receive a $3,500 stipend upon their departure, the letter says.

The letter does not name the country where they will be sent. Reportedly, Israel has made deals with Rwanda and Uganda to receive the migrants, though both countries deny signing any such deals. "It is a country that in the last decade has developed greatly and absorbs thousands of returning residents and immigrants from various African countries," the letter says of the destination.

The letter says those who do not leave voluntarily could be deported with a stipend significantly less than $3,500 and Israel will not permit them to take a portion of the money they made while working in Israel. 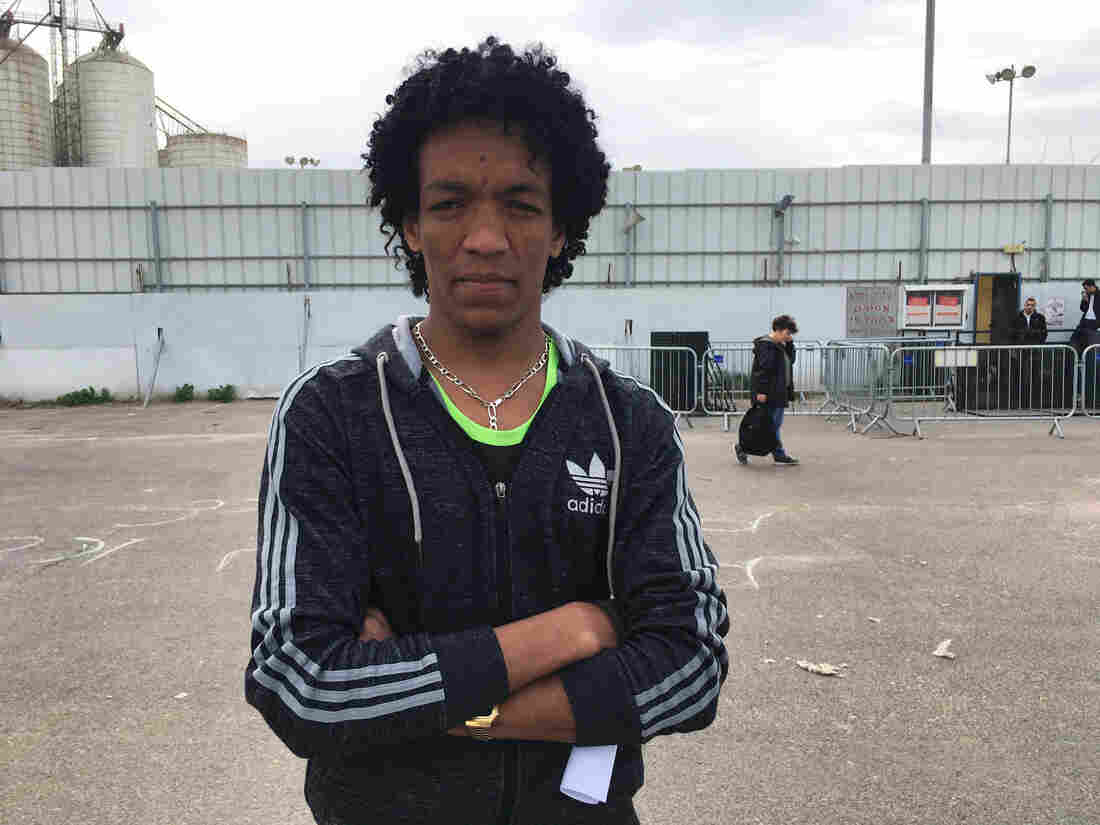 Mehretab Seyim, 28, holds a deportation notice he just received at an Israeli government immigration office in the Israeli city of Bnei Brak. The notice is written in Hebrew and Tigrinya, one of the languages spoken in Eritrea. Daniel Estrin/NPR hide caption 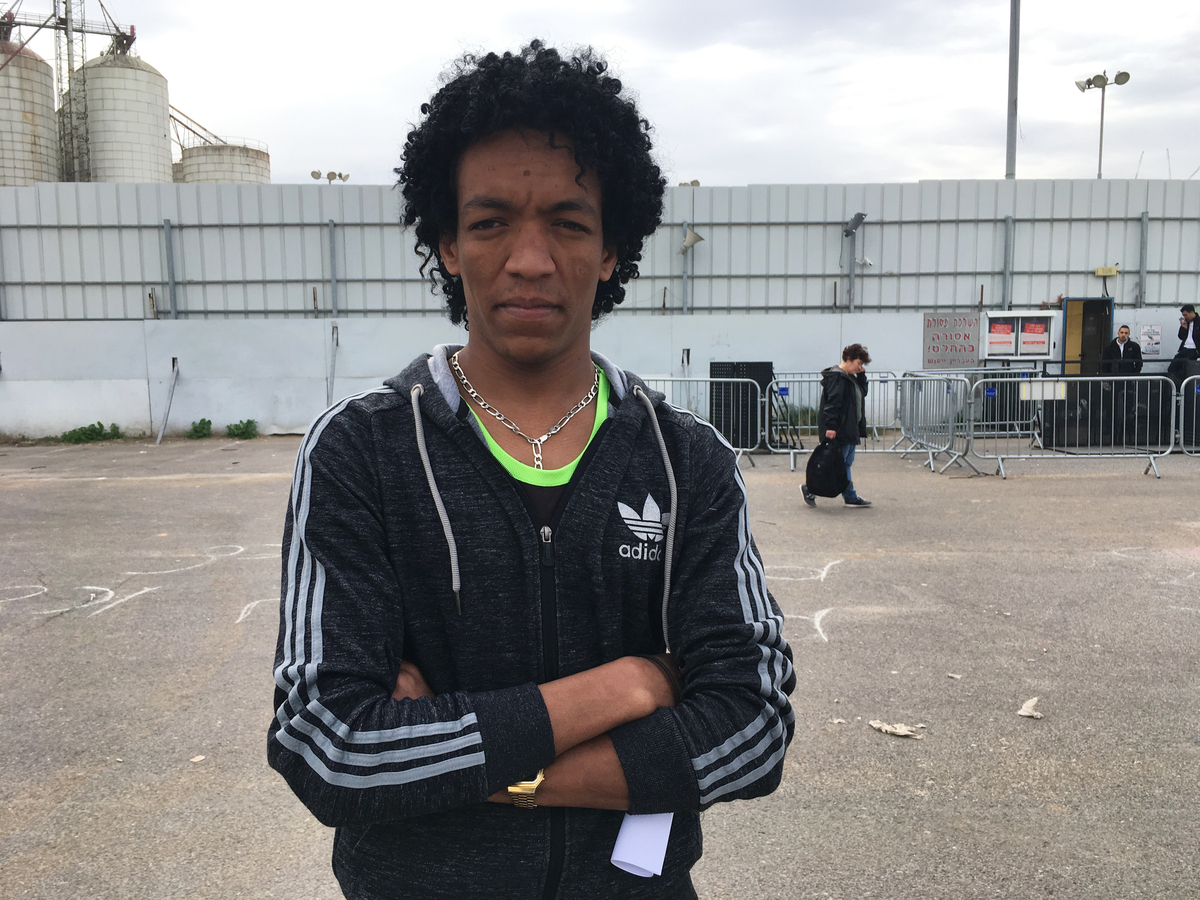 Mehretab Seyim, 28, holds a deportation notice he just received at an Israeli government immigration office in the Israeli city of Bnei Brak. The notice is written in Hebrew and Tigrinya, one of the languages spoken in Eritrea.

Every man NPR spoke with who received a deportation notice said he would choose Israeli jail — and refuse to leave.

"If I didn't have a problem in my own country, why am I being sent to another country?" asked Mehretab Seyim, 28, just after stepping out of the immigration office with a deportation notice in hand.

His question gets to the heart of the issue. Seyim said he fled an oppressive mandatory military service in Eritrea. According to the U.N., Eritrean military service is "prolonged and indefinite" with abusive conditions including using conscripts as forced labor.

Israel doesn't consider the draft in Eritrea a reason for asylum, arguing it is not considered persecution.

On the other hand, Israel is a signatory to the U.N.'s 1951 Refugee Convention and, based on assessments by the U.N. Refugee Agency, accepts it would be dangerous to send Eritreans and Sudanese to their home countries. The U.N. human rights body says Eritrea is ruled by a totalitarian regime with a "wholesale disregard for liberty," while violence continues in conflict-stricken areas of Sudan.

So Israel has granted temporary protected status to Eritreans and Sudanese, and longer-term humanitarian permits to several hundred Sudanese from the war-torn Darfur region.

After years of efforts to pressure the migrants to go — including withholding part of their salaries until they left the country, holding some of them in an open detention facility — and fights with the Israeli Supreme Court over what enforcement measures were permissible, the government enticed thousands to leave to Africa with stipends. It has toughened those efforts with the new deportation policy.

Seyim doesn't believe he'll be treated well in Rwanda or Uganda. The U.N. Refugee Agency says testimonies of migrants who left for those countries suggest they were never granted permanent status and faced extortion and detention as they tried to escape to Europe through conflict-ridden Libya. Several are believed to have died en route. Seyim is losing sleep over what the future might bring.

So is Anat Reisman-Levy, an Israeli volunteer helping migrants fill out asylum applications outside the immigration office. "Doing whatever I can do in order to sleep well at night," said Reisman-Levy. "The big picture is to prevent the deportation."

The issue of being a refugee, and being in danger, and asking for refuge, and other countries to not accept it — we've been there.

She said she was reminded of her parents – Holocaust survivors. "It's not Auschwitz," she said. "But the issue of being a refugee, and being in danger, and asking for refuge, and other countries to not accept it — we've been there."

On the other side of the debate are Israelis like cab driver Yossi Cohen, who are afraid the migrants will change Israel's makeup. "The fear is that tomorrow, the next day, they'll become citizens and take over the country," Cohen said, as he drove through a neighborhood heavily populated by Eritreans and Sudanese migrants.

Israeli Prime Minister Benjamin Netanyahu is defending the deportation plan, but public opposition has grown. A group of Israeli flight attendants and pilots, for instance, is calling on airlines not to fly people to Africa.

"Every day there are new groups of people" opposing the deportation plan, said Sigal Rozen of the Hotline for Refugees and Migrants, an Israeli advocacy group. "There are a lot of new petitions. Of physicians, of social workers, of artists."

There is also concern among some Jewish groups in the United States. An American Jewish community leader, Malcolm Hoenlein, said on a visit to Israel that he and heads of several Jewish organizations are studying the issue.

"We have this debate raging in the U.S. right now, and there's no way you can make it look nice when people are leaving a country," Hoenlein said. "But at the same time we recognize that every country has to set standards."

Under the new policy, Israel recently jailed the first several Eritreans who refused to accept a stipend and one-way ticket to Africa.

The future of the deportation policy is uncertain. Prison officials say they may not have the space and resources to jail all those migrants who refuse to leave the country. Meanwhile, a recent Israeli court ruling in favor of an Eritrean draft dodger's asylum plea could set a precedent for others who've escaped Eritrea's military service and are seeking asylum in Israel.

There is mounting pressure on the government to come up with an alternative solution.