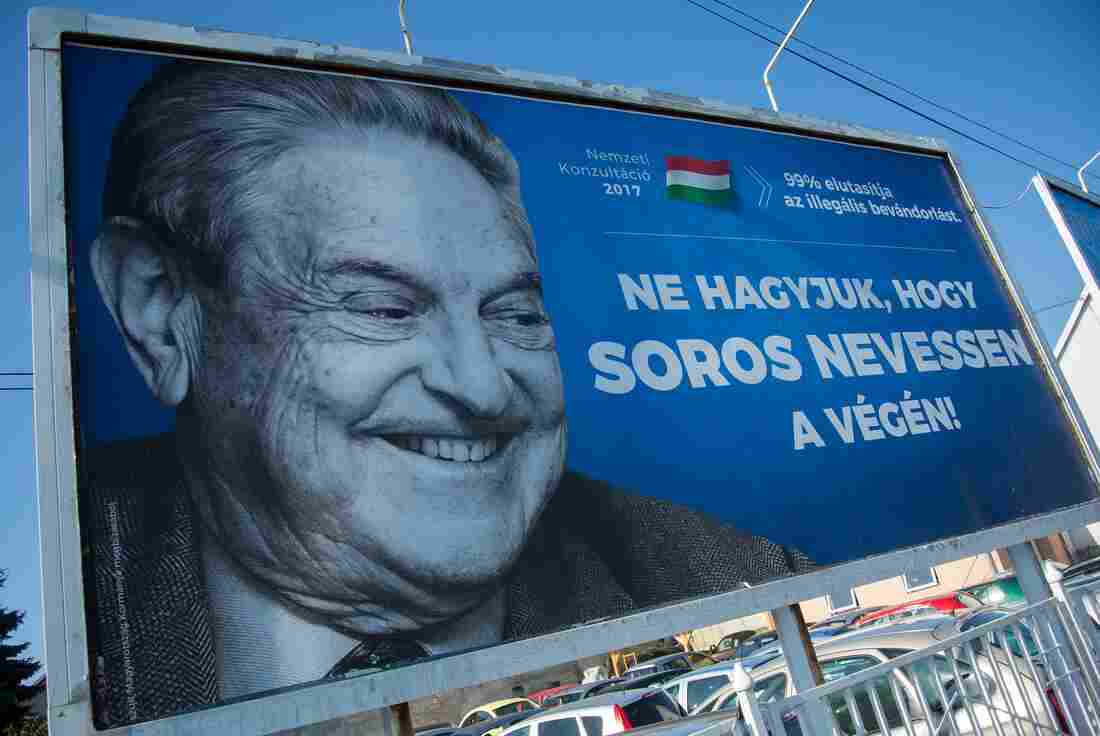 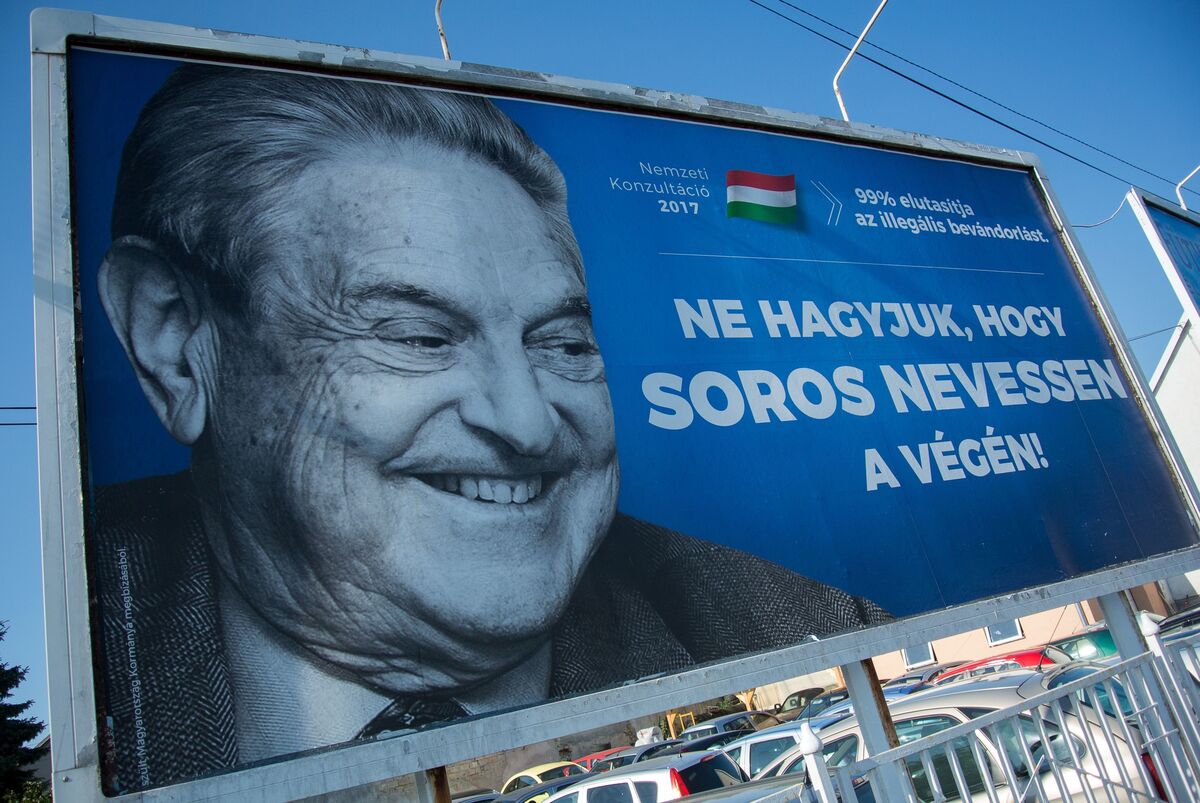 A poster with billionaire George Soros is pictured in July in Székesfehérvár, Hungary.

They are both Hungarian. They are both powerful. And three decades ago, they both worked to topple communism in their homeland.

But any alliance between Hungarian Prime Minister Viktor Orbán and Hungarian-American billionaire George Soros is long over. Orbán, 54, has turned on his onetime benefactor in a battle that appears nasty and personal, at least in public. Each calls the other a serious threat to Hungarians.

Orbán accuses Soros — a Jewish émigré who survived Nazi-occupied Hungary and later made his fortune in America — of trying to wrest control of their native country from those elected to office. The prime minister vows to stop the 87-year-old investor and business magnate who is spending most of his fortune promoting liberal and progressive causes around the world, including democracy building in the former Eastern bloc. (Soros' Open Society Foundations have been a financial supporter of NPR.)

During a speech last November to his right-wing Fidesz Party, Orbán accused Soros of fostering Muslim immigration that he said threatens to turn Hungary and Europe into "a mixed population" stripped of its Christian identity. He claimed the billionaire's goal is to "sweep away governments which represent national interests, including ours."

Orbán declined to be interviewed, but his spokesman, Zoltán Kovács, defended the government attacks on Soros and groups supported by Open Society Foundations. The latest assault involved bills introduced on Feb. 13 in Hungary's parliament that, if passed, could lead to many foreign-funded NGOs shutting down.

"These organizations definitely don't have a democratic mandate because they have never been voted for, nobody elected them, and definitely the only force is the money behind them," Kovács said. "And there are going to be sanctions against them if they don't behave according to the law."

But Soros argues such measures reflect the prime minister's autocratic ambitions. He accuses Orbán of corruption and tearing down the fledgling democracy they helped bring to Hungary. 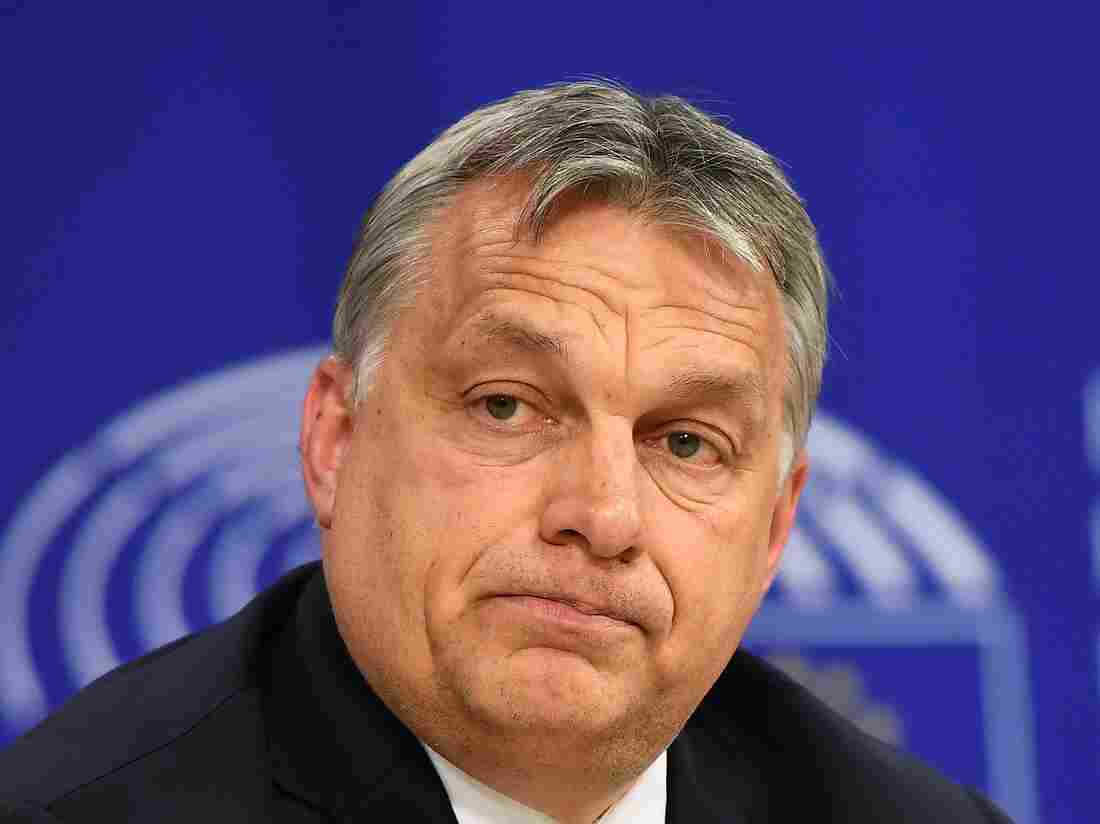 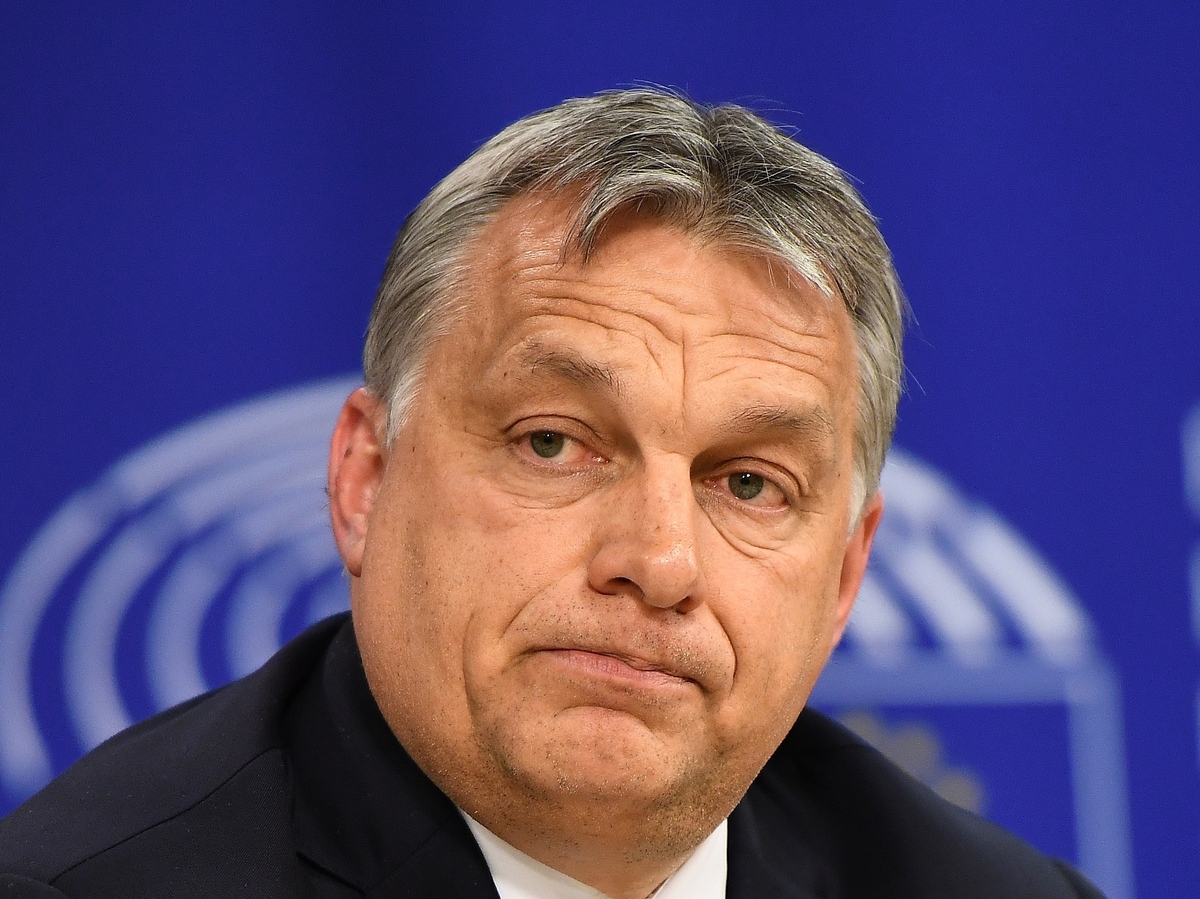 Hungary's Prime Minister Viktor Orbán addresses a press conference after attending a plenary session at the European Parliament in Brussels last April, after the EU launched legal action against Hungary.

"Orbán has been very successful in making the mafia state work efficiently," the billionaire philanthropist told the World Economic Forum in Davos, Switzerland, in late January (here are links to his speech). "He has got spies in every emerging, clean [party] that could attract the electorate."

Soros declined to be interviewed for this story, but Patrick Gaspard, who is the president of Open Society Foundations, rejected the Hungarian government allegations. He said the work his boss has done for the past 30 years is strictly limited to building up civil society and democracy.

"You can't get more personal than billboards with George Soros' face all over the country," Gaspard said, referring to government-funded placards in Hungary that accuse Soros of wanting to transplant millions of people from Africa and the Middle East and warn Hungarians not to let him "have the last laugh."

"George Soros has a thick hide and he can certainly absorb these attacks with grace as he has for some time now and will not be dissuaded," Gaspard added. 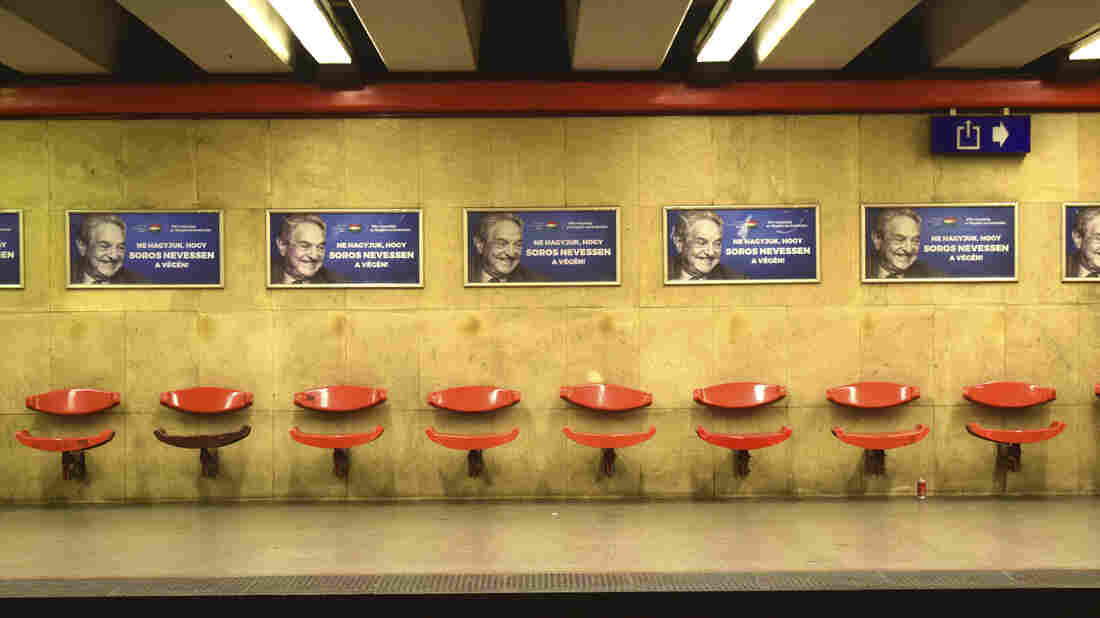 Advertisement in a metro station in Budapest in July. The Hungarian government said it would end its disputed ad campaign against Hungarian-American billionaire George Soros. Pablo Gorondi/AP hide caption 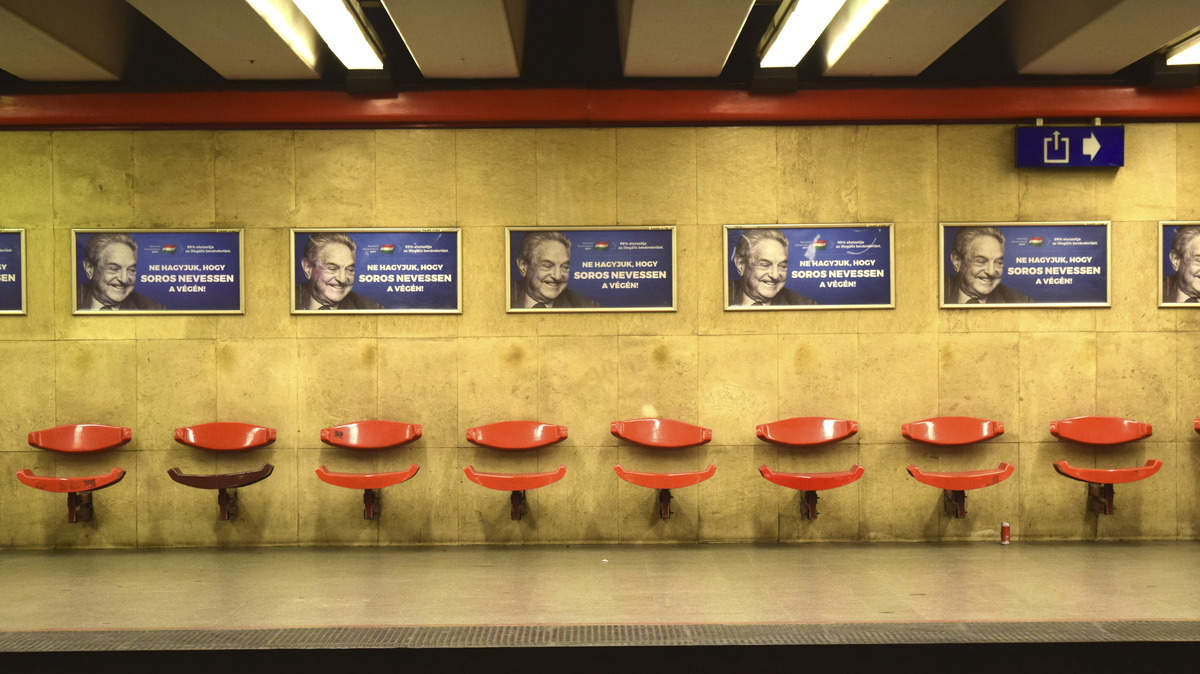 Advertisement in a metro station in Budapest in July. The Hungarian government said it would end its disputed ad campaign against Hungarian-American billionaire George Soros.

Nor will his Open Society Initiative for Europe based in Budapest, said its director, Goran Buldioski. Shortly after he graduated with a law degree, Orbán applied to this Soros-funded group and received a scholarship of about $10,000 to attend Oxford in 1989.

Buldioski said Orbán's attacks are of growing concern to Hungarian civil society. "This is really playing with dangerous stuff here, especially knowing the history of this country," he said. "Let me spell it out — the anti-Semitism. It's not spoken directly, but the overtones are very, very clear."

But the prime minister's decision to launch an attack against Soros and the civil society he supports comes as little surprise to Botond Feledy, senior fellow at the Center for Euro-Atlantic Integration and Democracy in Budapest. He said the strategy is one that has worked well for populists across Central Europe: shift voter attention away from domestic issues by finding a foreign boogeyman.

"First it was IMF, then it was the EU, then the migrants and now we have George Soros," Feledy said. "So this is actually a continuing campaign which keeps the majority of Hungarian voters at bay, not to take their own government as the forum against which they should protest" about concerns they might have.

Laszlo Keri, who is a former political science professor of Orbán's, agreed. He said he's sure his former pupil will do whatever it takes to win another term as prime minister during upcoming national elections on April 8.

"His biggest personal tragedy was losing the 2002 election," Keri explained. "So I daresay there is no connection between the real Soros and the Hungarian campaign production" version.

Orbán's pursuit of Soros and the foreign-funded NGOs started shortly after President Trump took office. Some political observers NPR interviewed said Orbán saw the American leader as an anti-Soros ally and counted on his administration offering little resistance to Budapest's move against organizations linked to the billionaire in Hungary. (The U.S. joined Europe last year in objecting to Hungary's attempt to shut down the Soros-founded Central European University in Budapest. But the EU has been more assertive, launching legal proceedings against Orbán not only over the university but also his government's attacks on NGOs.)

The Hungarian government's latest "Stop Soros" bills are the harshest yet. They would empower the interior minister to ban nongovernmental groups that are deemed a "security risk" or support immigration, while also levying a 25 percent tax on foreign donations to those supporting migration that remain open.

Proponents claim the measures are aimed at curbing illegal immigration, but Orbán's many critics charge the aim is to silence dissent and control Hungarian civil society.

If the measures pass, those who will pay the price are many of the 55,000 NGOs registered in Hungary, said Veronika Móra, who heads the Hungarian Environmental Partnership Foundation in Budapest, an umbrella group for organizations involved in environmental or local community causes. She warned the laws could bankrupt many nonprofit groups in Hungary, including those that have nothing to do with Soros.

"We even heard about stories like a small association of voluntary firemen working in a village, who received from an Austrian or German similar organization a used fire engine, which is still quite valuable. But all of a sudden that [legislation] makes them a foreign-funded organization," Móra explained.

Some Fidesz lawmakers say a vote on the "Stop Soros" measures aren't likely before the April 8 parliamentary elections.