Accessibility links
A U.S. Aircraft Carrier Anchors Off Vietnam For The First Time Since The War : Parallels The USS Carl Vinson, a nuclear-powered carrier, is expected to spend four days at the port of Danang at a time of tensions over China's expansion in the South China Sea. 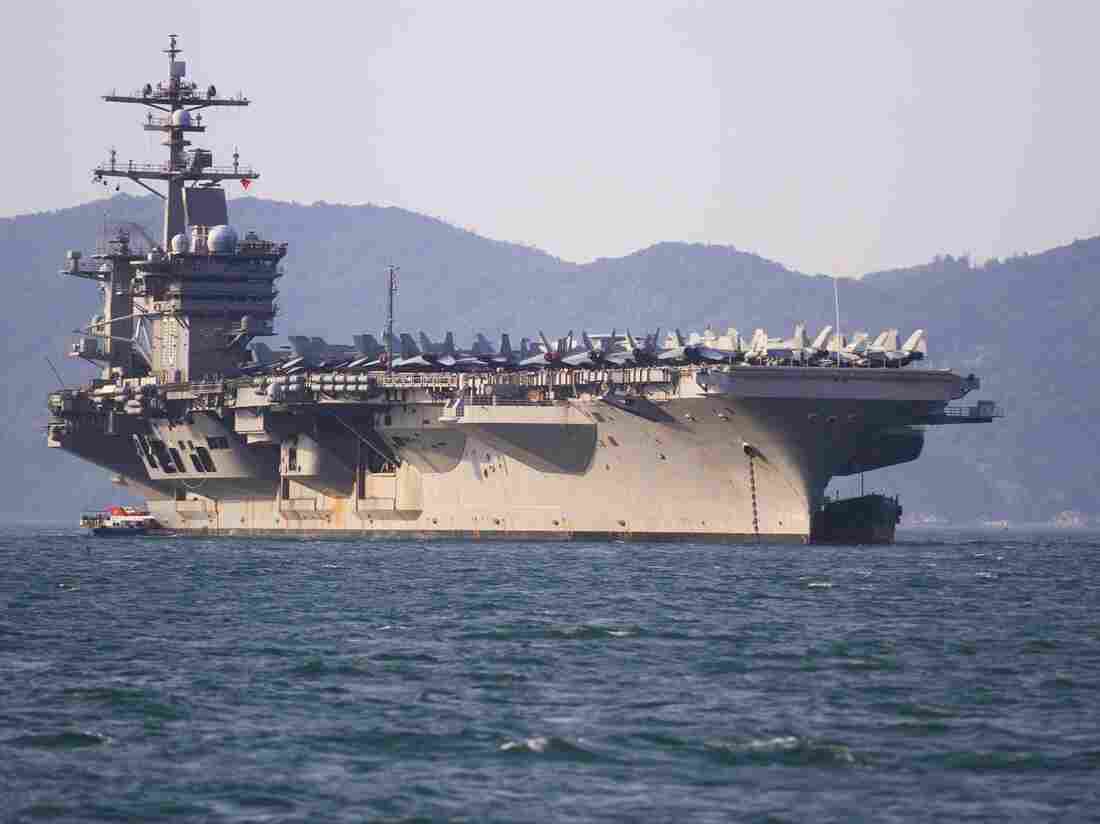 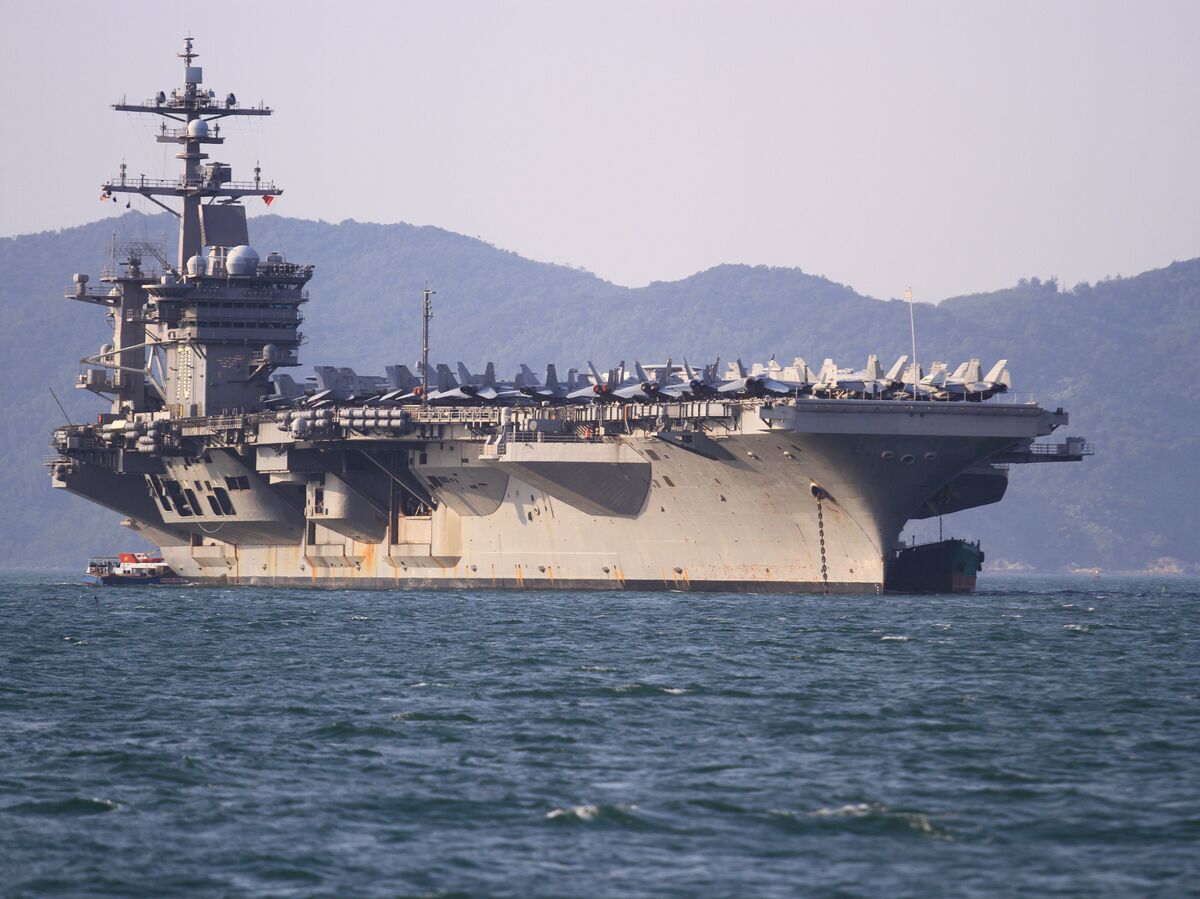 In Vietnam's capital Hanoi there are lots of museums about past wars the Vietnamese have fought, including against the French but especially against the Americans.

The B-52 Victory Museum is strewn with broken pieces of fuselages and tails from downed U.S. aircraft. What's missing are the visitors. Eighty-two-year-old Pham Hong Thuy — sitting alone watching after his grandson — explains why.

"The war ended decades ago," says Pham, who fought the Americans at the 1968 Battle of Khe Sanh. "People around the ages of 20, 30 or under 40, they do not know much about the war, they don't care about the war," he says.

"The U.S. and the Vietnam are good friends now," he adds. "And the war is in the past."

The arrival of a U.S. Navy aircraft carrier, the USS Carl Vinson, at Vietnam's port city of Danang is a reminder of that growing friendship. It's the first visit by a U.S. aircraft carrier since the end of the war in 1975, and it comes amid rising tensions in the region over China's aggressive territorial expansion in the South China Sea. 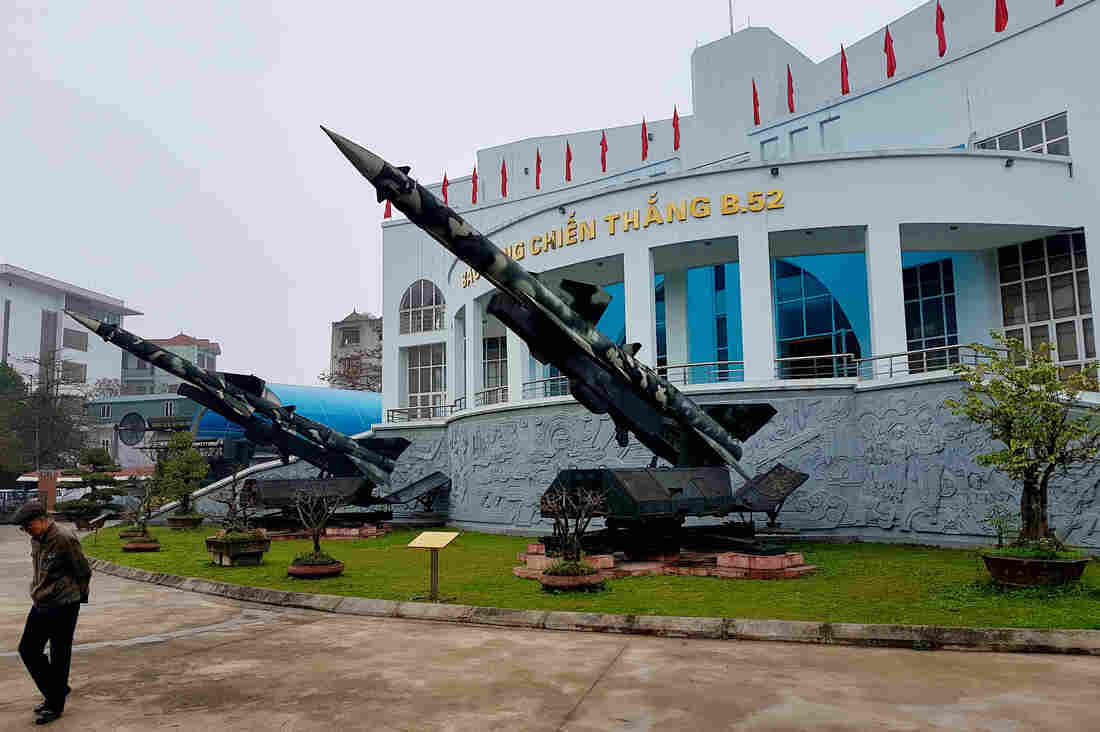 The B-52 Victory Museum in Hanoi, Vietnam, where remnants of downed U.S. bombers litter the courtyard and where other war memorabilia can be found inside. Once popular, the museum now draws fewer and fewer visitors as memories of the war fade. Michael Sullivan for NPR hide caption 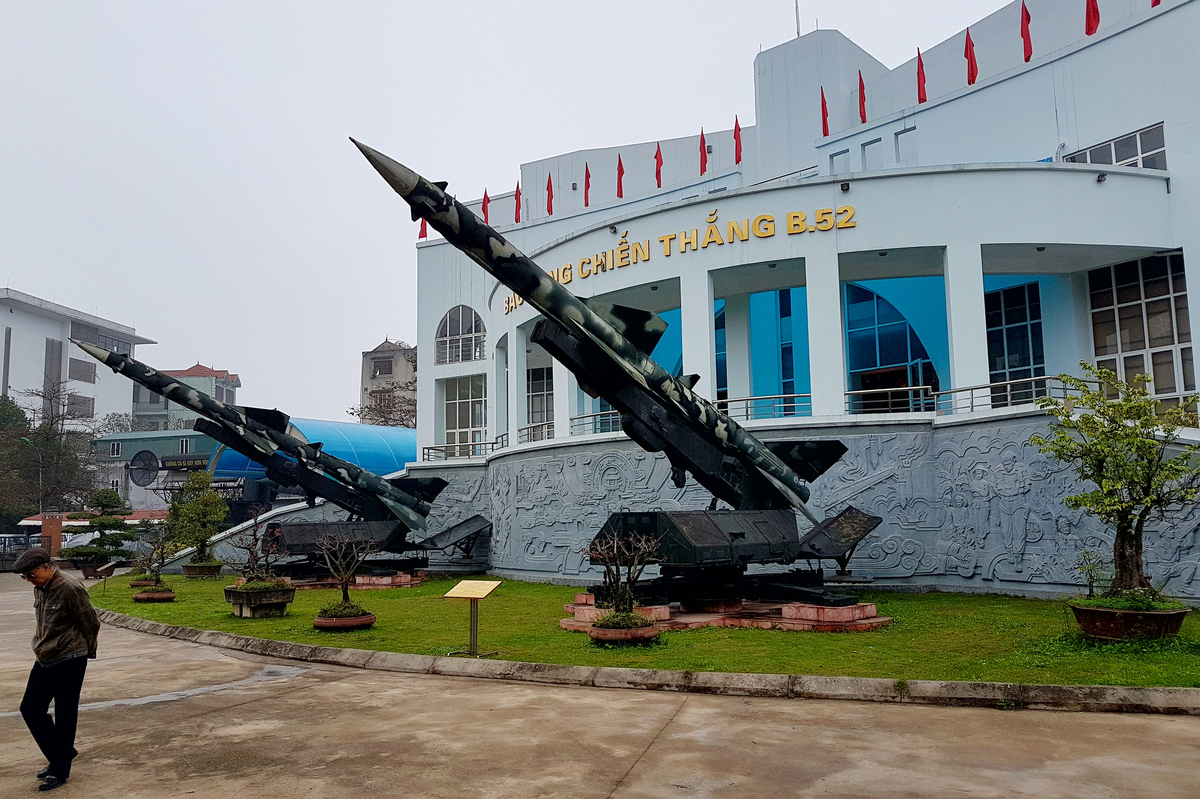 The B-52 Victory Museum in Hanoi, Vietnam, where remnants of downed U.S. bombers litter the courtyard and where other war memorabilia can be found inside. Once popular, the museum now draws fewer and fewer visitors as memories of the war fade.

Vietnam is usually cautious about antagonizing China, its neighbor to the north with which it has a history of conflict. That makes the timing of the visit even more interesting.

"It was a U.S. initiative to request the carrier visit," says Carl Thayer, a Vietnam scholar and emeritus professor at the University of New South Wales, Canberra. "It was mentioned in a presidential statement [by President Trump]. And Vietnam has taken a deep breath and decided that it's worth the risk to bring an American carrier there because of China's unrelenting militarization."

The USS Carl Vinson, a nuclear-powered aircraft supercarrier, came along with a cruiser and a destroyer — with more than 6,000 sailors on board. It will spend four days in Danang.

The site is heavy with symbolism. It's the same port city where U.S. combat troops first landed to support South Vietnam's fight against the communist north in March 1965.

It's also the closest Vietnamese city to the disputed islands and waters of the South China Sea — or the East Sea, as Vietnam calls it.

"The USS Carl Vinson is the mightiest warship afloat," Thayer says. "It brings along with it escort ships with more firepower than China can assemble in all of its seven artificial islands or even [its] South Sea Fleet, basically. So it's a massive display of military might."

And it's one that delights Nguyen Duc Huy, an 88-year-old retired major general in the North Vietnamese army.

His home in Hanoi is decorated with photos, including one of him meeting Cuba's Fidel Castro from 1973 in Quang Tri province during Vietnam's war against the U.S.

The general says he joined the army in 1947 and fought the French, the Americans, the Cambodians and against China twice. The first time was in 1979, during the monthlong border war China launched against Vietnam to punish it for invading Cambodia. The second time was during the mid-1980s, when the two countries skirmished repeatedly along Vietnam's northern border.

"We welcome the visit of such a mighty show of force by a friend," he says. "A show of force that's also a warning to China." He says that China and Vietnam are now friends — in theory — but "they continue to take our islands and ocean whenever they have a chance. And they even continue to want our land," he says.

"Please remember," the general adds, "the Vietnamese people have thousands of years experience fighting against the Chinese. What's going on now," he says, referring to the disputes over islands and fishing rights in the South China Sea, "isn't new."

Hoang Ngo Giao, who directs the Institute for Policy, Law and Development Studies in Hanoi, also welcomes the ship visit and sees it as a warning to China. Though Vietnam's government has been very careful not to label it as such.

In the runup to the U.S. Navy's visit, there's been little coverage in the Vietnamese state-run media, in part, analysts say, to avoid antagonizing China.

Hoang and other analysts credit the Trump administration for making the visit a reality, and for showing strength against China in the South China Sea.

"Many political observers in Vietnam, including myself, think Mr. Trump has taken affirmative, solid and substantive steps in the South China Sea," he says. "If the Obama administration had [taken]such strong moves, I think China would not have done all that strong militarization like they did in the Paracel and Spratly islands." Under President Obama, he says, "There was much more talking and diplomacy but little action."

The Obama administration repeatedly advocated for free navigation in the contentious region but he was criticized, particularly by Republican opponents, for not beefing up the Navy to deter China from building artificial islands in the South China Sea.

U.S. and Vietnam are pals?

Since the United States and Vietnam normalized relations in 1995, there have been regular goodwill visits by U.S. naval vessels and a fast-growing and increasingly important economic relationship between the two former enemies, though the U.S. has routinely criticized communist Vietnam's dismal record on human rights.

Although some Communist Party hard-liners may be wary of aligning too closely with the old foe, many Vietnamese say they want the American attention.

Take fisherman Ho Ngoc Phuoc. He says two boats he runs out of Danang harbor are constantly harassed by Chinese vessels when he tries to fish in international waters near the islands claimed by both China and Vietnam.

"We have wooden boats and they have steel boats and they use water cannon to chase us away," he says. "Sometimes they damage our boats, too, so we have to run away." 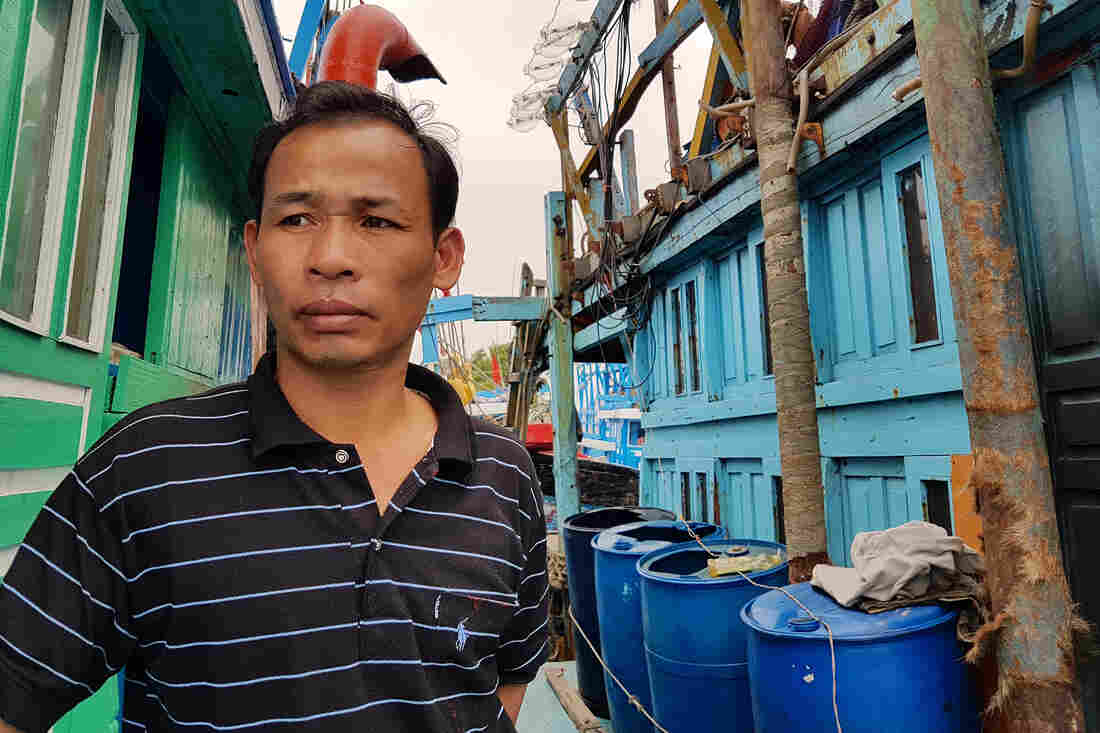 Capt. Pham Van Thanh, 46, is hopeful that the U.S. carrier visit leads to increased patrols in the South China Sea — or the East Sea, as the Vietnamese call it. Michael Sullivan for NPR hide caption 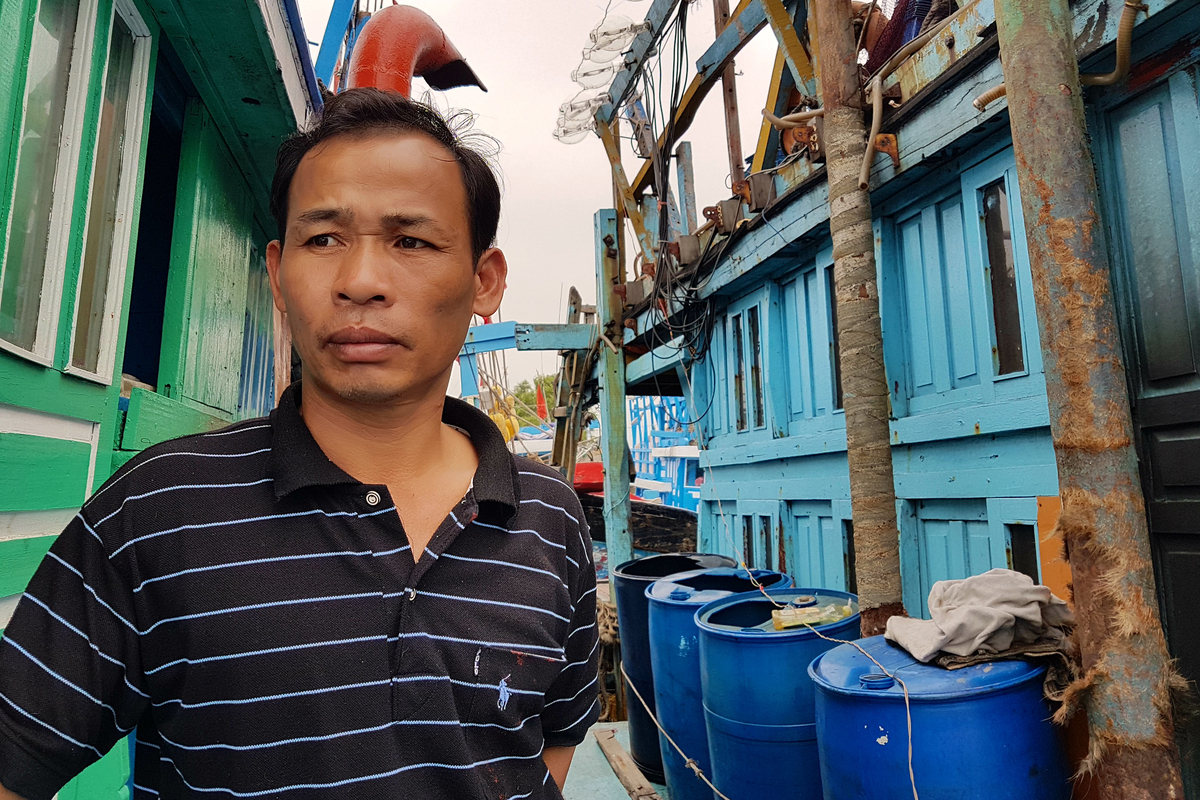 Capt. Pham Van Thanh, 46, is hopeful that the U.S. carrier visit leads to increased patrols in the South China Sea — or the East Sea, as the Vietnamese call it.

One of his captains, 46-year-old Pham Van Thanh, is hopeful that the U.S. carrier visit leads to increased freedom of navigation operations by the U.S. in the East Sea/South China Sea.

"The more U.S presence in the East Sea, the less complicated the East see is and there will be less harassment against Vietnamese fisherman," Pham Van Thanh says. "There's nothing we can do with our neighbor China. So if there is more U.S. presence," he says, "the East Sea will be more stable."

And more stability, he adds, could mean a better catch and more money at the end of the day.

At Danang's Long Caphe, a popular coffee shop, a group of young architects say pretty much the same thing. They're frustrated at their government for not taking a stronger stand against China. They mostly blame the politics of the countries' shared communist ideology.

Better ties with the U.S., says one of the architects, 28-year-old Huynh Duc Cuong, would be welcome.

"If we have strong friend military, big countries like China can no longer use their might to create injustice," he says. "For our fishermen, for example. It's in our territory, but we are chased away instead. Young people like me are frustrated about that," he says. "So such visits would help create more justice and make China more mindful of their actions.

Across the table, his colleague, 31-year-old Nguyen Thanh Dat nods in agreement. "To me, the U.S. has never been the enemy he says. Our enemy has always been to the north."

A previous headline on this story inaccurately described the U.S. aircraft carrier as docking in Vietnam. The ship is anchoring off Vietnam's coast.