Accessibility links
Wanted: U.S. Envoy To Talk To North Korea : Parallels President Trump should appoint a senior envoy, backed by a strong interagency team, to represent him in talks with the North Korean government. 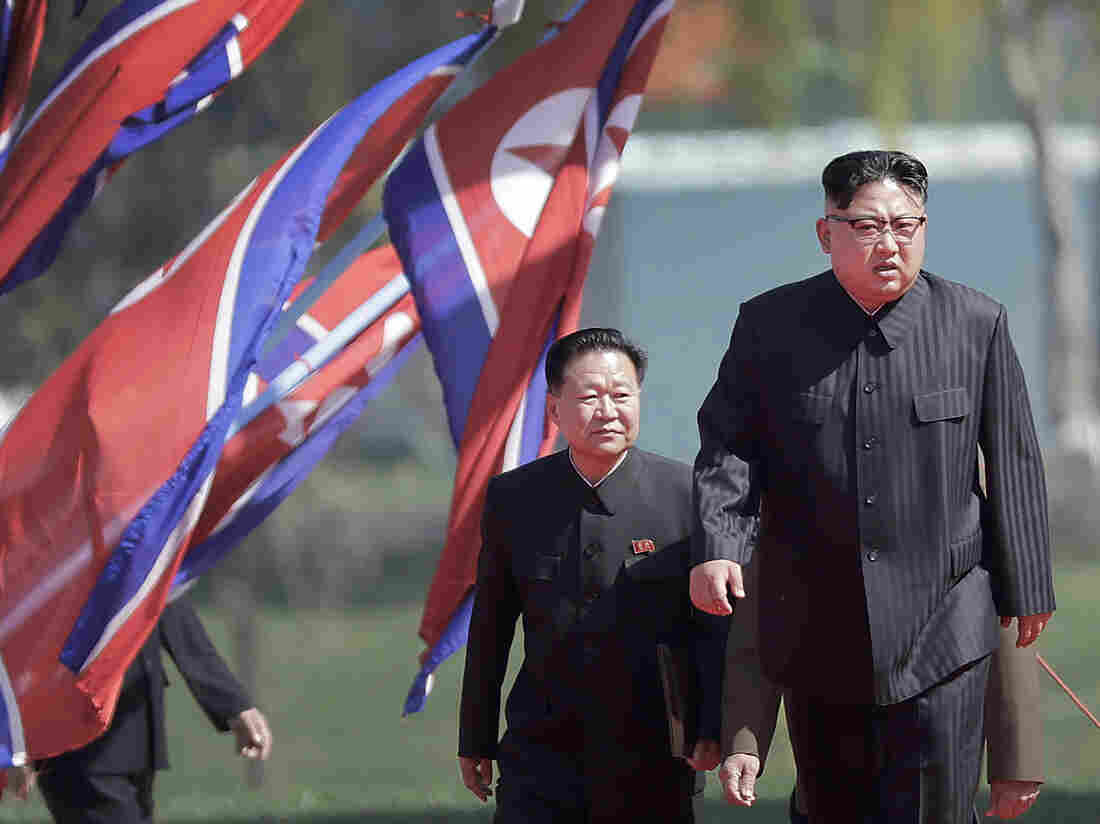 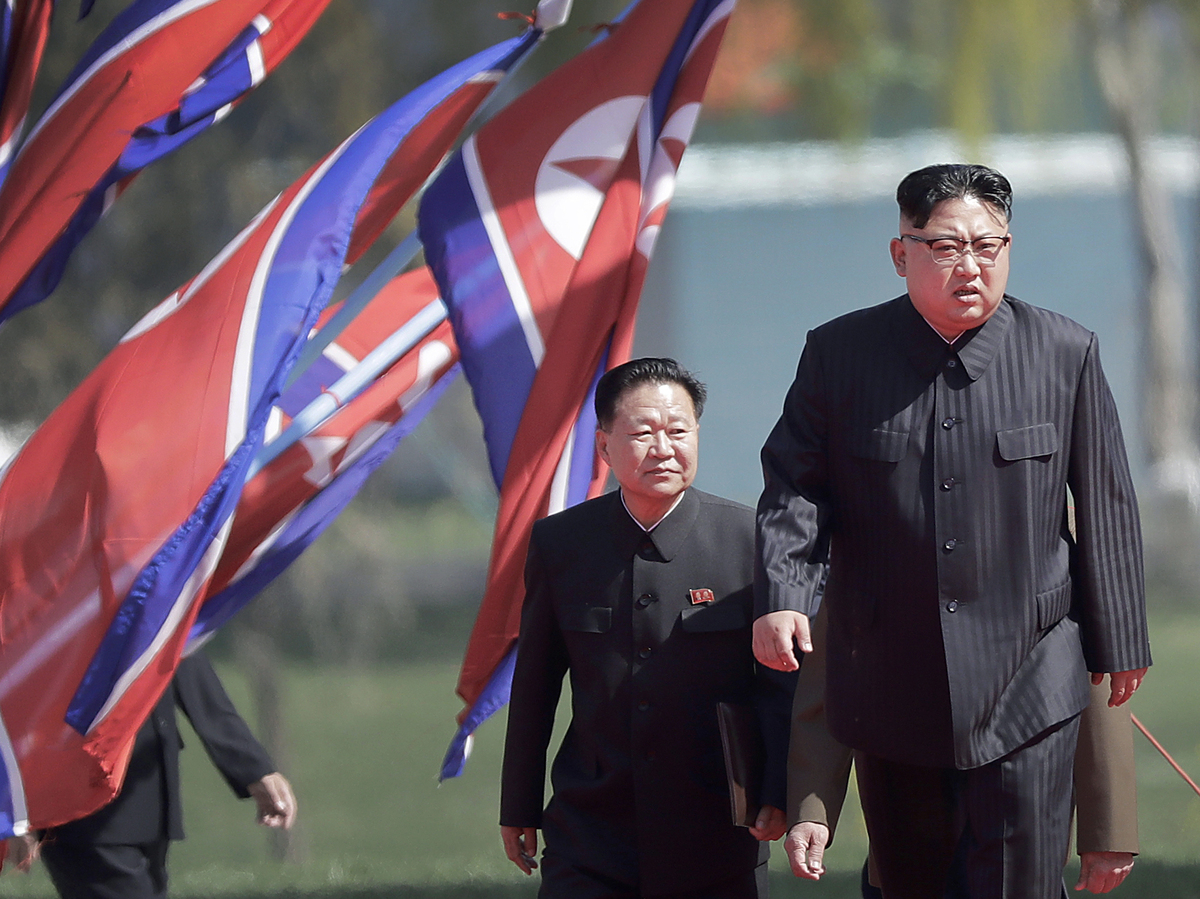 North Korean leader Kim Jong Un, right, and Choe Ryong Hae, vice chairman of the central committee of the Workers' Party, arrive for the official opening of the Ryomyong residential area, in April 2017 in in Pyongyang, North Korea.

Kim Jong Un's reported offer to extend the current freeze on nuclear and missile tests as a basis for beginning denuclearization negotiations with the United States is an opportunity not to be missed. Whether the opening produces significant progress toward North Korea's denuclearization or merely a lull in its activities is uncertain. To take full advantage of the opportunity, President Trump should appoint a senior envoy to represent him in the talks, backed by a strong interagency team.

Of course, there is the possibility that U.S.-North Korea dialogue could begin with very senior officials, such as Secretary of State Rex Tillerson and North Korean Foreign Minister Ri Yong Ho, who could agree to establish a formal negotiation. But, to conduct a sustained and complicated negotiation will require a dedicated special envoy and team of technical and regional experts.

Answering the question of who will represent the United States in these negotiations is especially important in view of the retirement last week of the State Department's designated North Korea envoy, Ambassador Joseph Yun. Given our experience talking to the North Koreans over the past 25 years, what each side has to say is important of course but who conducts the dialogue will be an important factor in determining success or failure.

What qualities should President Trump look for in a special envoy?

In the past, Washington has relied on individuals to lead the charge. Under the Clinton administration, Robert L. Gallucci, who helped cease Saddam Hussein's nascent nuclear program working for the United Nations and then in stopping the diaspora of Soviet experts in weapons of mass destruction after that country collapsed, played the central role in halting North Korea's growing fissile material production program.

The U.S. point person during President George W. Bush's second term, Ambassador Christopher Hill, had played a key role in reaching the 1995 Dayton Agreement ending the war in Bosnia and subsequently served as ambassador to Poland as well as the Republic of Korea.

President Barack Obama's special envoy during his first term, Ambassador Stephen Bosworth, had an extensive diplomatic career over two decades and spent two years from 1995 until 1997 as the head of the Korean Peninsula Energy Development Organization working with North Koreans to implement the Clinton denuclearization deal.

Each of these individuals had different personalities, experiences and backgrounds, but three common characteristics stand out. First, a special envoy should have extensive diplomatic experience handling tough challenges, preferably dealing with despots and dictators. All three had that experience. Bosworth helped to engineer the ouster of Philippine dictator Ferdinand Marcos in 1986. Hill dealt with Slobodan Milosevic during the Bosnia crisis. Gallucci began his career traveling to Pakistan trying to convince Pakistani strongman Muhammad Zia-ul-Haq to give up his nuclear weapons and then moved on to Saddam and Iraq.

Second, a special envoy should have access to and strong support from the president, the secretary of state and the secretary of defense. It's a two-way street. The envoy's 24-hour-a-day experience wrestling with the North Korean challenge — and meeting with the North Koreans — will make that person invaluable in informing more senior decision-makers.

And, in turn, it is essential that they support the envoy in finding solutions to seemingly intractable problems. Gallucci played that role in Cabinet-level meetings during the Clinton administration as well as working closely with Clinton's National Security Adviser Anthony Lake and Sandy Berger, Lake's deputy. The triumvirate of Ambassador Hill, Secretary of State Condoleezza Rice and President Bush drove North Korea policy during his second term trying to fashion diplomatic solutions.

Third, ideally, the envoy should be senior enough to meet directly with Kim Jong Un, as well as the leaders and senior officials of the other countries that will play a role in the negotiations, including South Korea, Japan, China and Russia. One lesson from past meetings with Kim's grandfather and father is that direct face-to-face talks with a North Korean leader, while rare, can produce "on-the-spot guidance" that instantly becomes official policy.

Finally, face-to-face experience with the North Koreans is ideal but unlikely given the years that have gone by with little or no contact between the two countries. Second best is the envoy should have a strong support team of experienced experts. By experience, we do not mean reading government documents or intelligence reports, all of which are important. But there is no substitute for dealing with North Koreans face-to-face to give you a feel for how they think and operate as well as what is and is not possible. And make no mistake about it: The North Koreans will have decades of experience learning about the United States and talking to Americans. That's important in conducting a dialogue.

Whether the Trump administration's increasing economic sanctions on North Korea in response to Kim Jong Un's accelerated testing campaign led to where we are today is unclear, although it may have been one factor nudging Pyongyang toward offering a diplomatic opening. There may also have been others at work, including a decision in the North that its current nuclear deterrent is adequate for security purposes and a desire to shift toward economic modernization.

In any case, to exploit this opening, President Trump should appoint a senior envoy to represent him in negotiations with Pyongyang. That will be one of the most important next steps toward thwarting the global threat of a nuclearized North Korea.

Gary Samore and Joel Wit have been participating in face-to-face U.S. talks with North Korea for 25 years.