Accessibility links
For China, One Of The Greatest Risks Of Trump-Kim Talks Is Being Sidelined : Parallels Beijing worries it will be marginalized from a potential U.S.-North Korea diplomatic process. 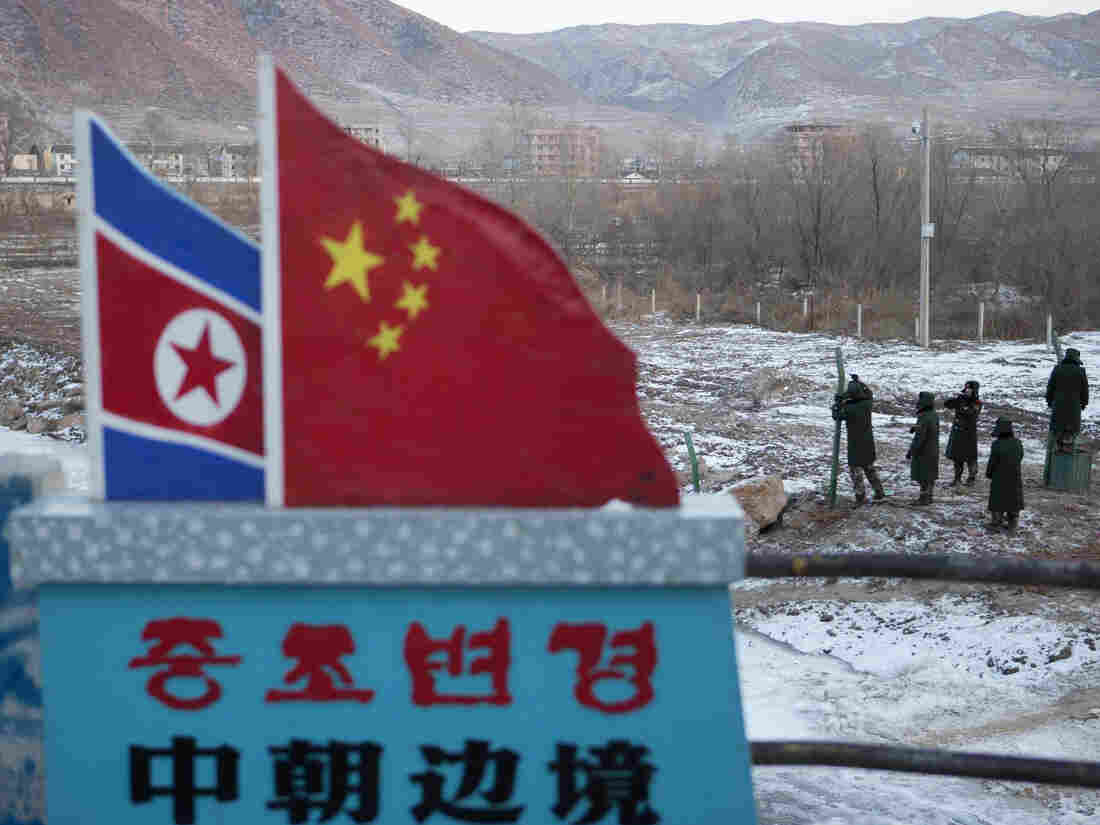 A concrete marker with the North Korean and Chinese national flags has the words "China North Korea Border," at a crossing in the Chinese border town of Tumen in eastern China's Jilin province. Ng Han Guan/AP hide caption 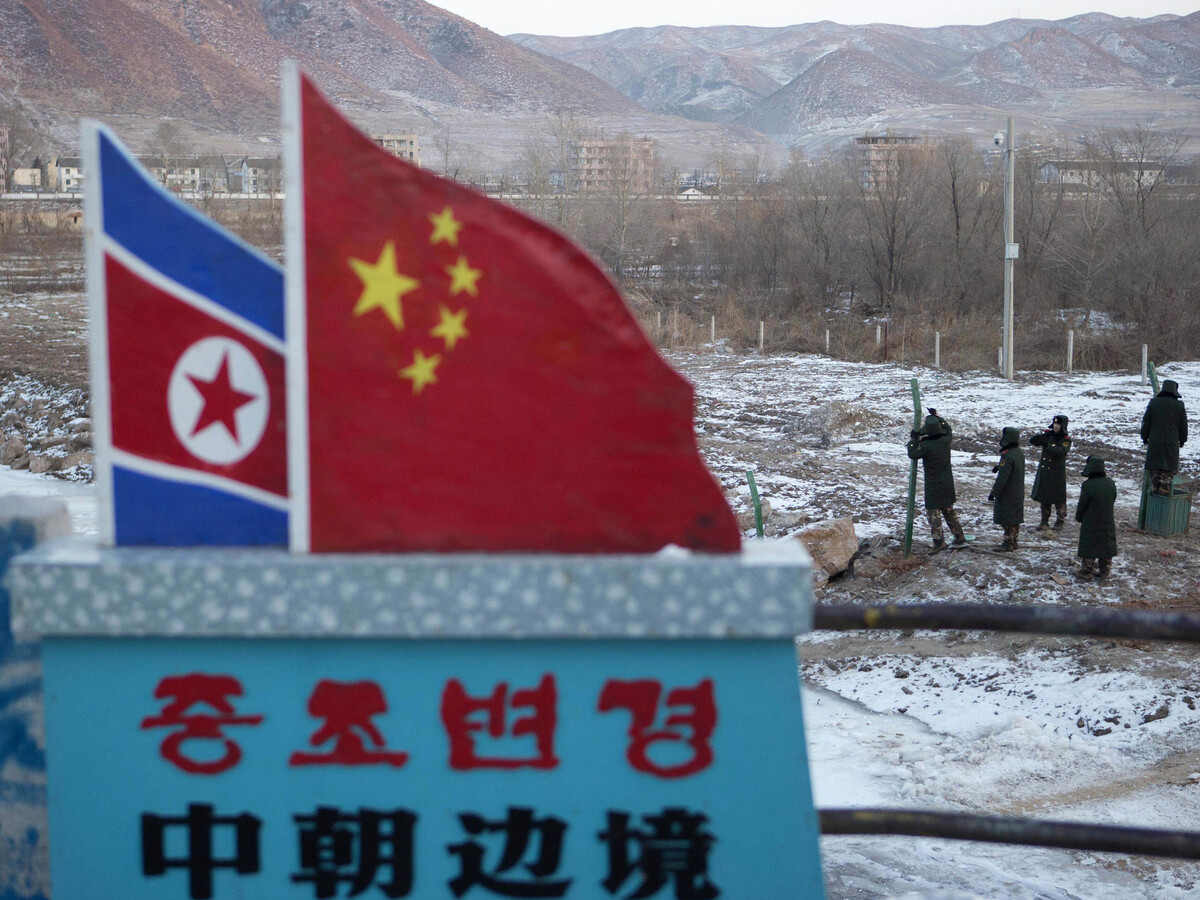 A concrete marker with the North Korean and Chinese national flags has the words "China North Korea Border," at a crossing in the Chinese border town of Tumen in eastern China's Jilin province.

President Trump's decision to meet North Korea's leader, Kim Jong Un, by the end of May poses both risks and opportunities for China.

For the time being, U.S. plans to launch a military strike on North Korea are on the back burner and there is hope for an easing of tensions on the Korean Peninsula.

Chinese President Xi Jinping is undoubtedly relieved that the danger of war on China's doorstep that could threaten Chinese security and undermine his national rejuvenation plan has decreased. Beijing worries, however, that it will be marginalized from the diplomatic process that may soon get underway, making it difficult to ensure that Chinese national interests are protected.

In a phone call with Trump the day after the announcement of the planned U.S.-North Korea summit, Xi welcomed the U.S. president's decision to meet with Kim and urged both sides to "start engagement and dialogue as quickly as possible and strive to obtain positive results."

The U.S. "maximum pressure" strategy aimed at severely restricting Pyongyang's hard currency earnings through harsh international sanctions has made China increasingly uneasy. Beijing has long feared instability and a possible collapse of North Korea, which could result in a unified peninsula allied with the United States and American troops deployed close to the border with China.

China was the host and convener of the Six-Party Talks, a 2003-2007 process that saw North Korean representatives sit down with delegates from the United States and four other countries to discuss ending the North's nuclear program in exchange for incentives. China played a key role especially in forging agreement among the parties. In a September 2005 joint statement, Pyongyang agreed to abandon its nuclear weapons and nuclear programs, while the U.S. said it had no nuclear weapons on the Korean Peninsula and that it would not attack North Korea.

If new negotiations are launched, China may not have a seat at the table — and that prospect is creating anxiety. Although the Chinese have long insisted that the crux of the North Korea nuclear issue is a dispute between Washington and Pyongyang, they want to continue to exert influence over major policy decisions, and they fear that a U.S.-North Korea deal could have negative implications for Chinese geopolitical interests.

Beijing's fear of being excluded and its interests harmed is already being voiced by Chinese experts. Professor Shi Yinhong, director of People's University's Center for American Studies and adviser to the State Council, lamented that as Trump prepares to meet with Kim Jong Un, China "can only stand on the sidelines and welcome the development, but it can almost do nothing."

Zhang Liangui, a professor and Korea scholar at the Central Party School in Beijing, emphasized that the North Korea nuclear issue "involves geopolitical and regional security and China naturally should take an active part in it." Zhang said China should try to prevent North Korea from siding with the United States.

At the annual press conference held during China's National People's Congress, Chinese Foreign Minister Wang Yi took credit for the Korean Peninsula breakthrough. Since North Korea refrained from conducting nuclear or ballistic missile tests during the Olympics and the U.S. and South Korea had postponed their joint military exercises, Wang said that China's "dual freeze" proposal had proved to be the "right prescription for the problem and created basic conditions for the improvement of inter-Korean relations." He seemed to be signaling Seoul, Washington and Pyongyang that Beijing's contribution to peacemaking had thus far been indispensable and would continue to be essential going forward.

If negotiations follow a Trump-Xi summit, China will very likely seek to participate, rather than leaving the deliberations to the United States and the two Koreas. Beijing may seek to reinsert itself by offering to host the diplomatic talks. Pyongyang would very likely oppose Chinese participation in any negotiations. North Korea's ties with China have become increasingly strained owing to Kim's continued pursuit of nuclear weapons and long-range ballistic missiles in defiance of China's wishes and its support for stricter sanctions on North Korea.

Ensuring that China has a seat at the negotiating table should not be a central U.S. objective. Although the U.S. and China have shared interests in a denuclearized Korean Peninsula, their interests diverge on other matters. Beijing has openly called for an end to "Cold War" alliances in the region and hopes that American forces will be withdrawn from the Korean Peninsula. If talks progress to the point of considering replacing the armistice that ended Korean War hostilities on July 27, 1953, with a peace treaty, as China is a party to that agreement, it could be invited to join.

If China is excluded for the time being, the Trump administration would be wise to keep Beijing in the loop. Even in the best-case scenario, negotiations are likely to be protracted. Sustaining maximum pressure on North Korea through sanctions, which was likely a factor in Kim's outreach to Seoul and his offer to meet with Trump, will require continued Chinese cooperation.

In a sign that China is prepared to be a bystander if talks begin, an editorial published in China's Global Times urged the Chinese people to "stay calm and remain poised, and avoid the mentality that China is being marginalized." Adding that "it is unnecessary for China, a major power, to worry about North Korea 'turning to the US,' " the editorial maintained that "if the Kim-Trump meeting will contribute to the denuclearization and peace that China desires the most, China has no reason to be unhappy about it."

Bonnie S. Glaser (@BonnieGlaser) is senior adviser for Asia and director of the China Power Project at the Center for Strategic and International Studies.