Accessibility links
Why Abolishing China's Presidential Term Limits Is Such A Big Deal : Parallels In a land dominated for thousands of years by absolute monarchs, the move is historically significant and seen by Chinese liberals as a big step backward. 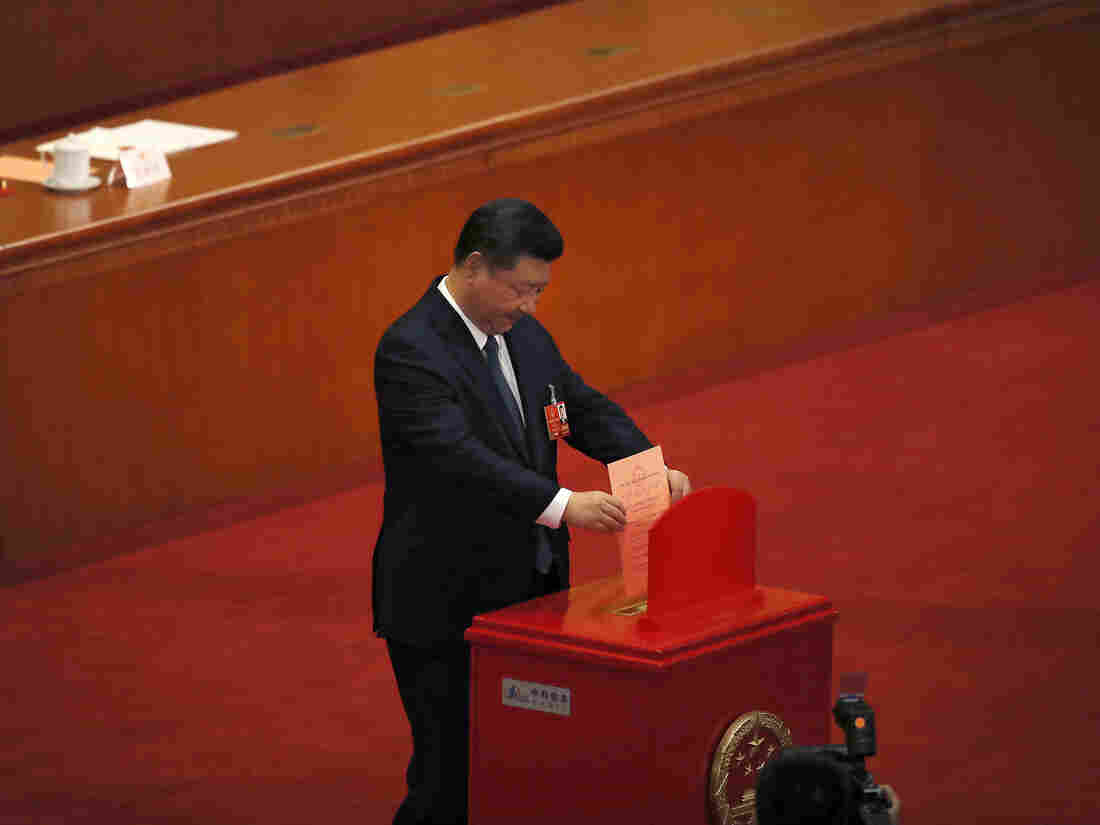 Chinese President Xi Jinping casts his vote for an amendment to China's constitution that abolishes term limits on the presidency, during a plenary session of the National People's Congress at the Great Hall of the People in Beijing on Sunday. Andy Wong/AP hide caption 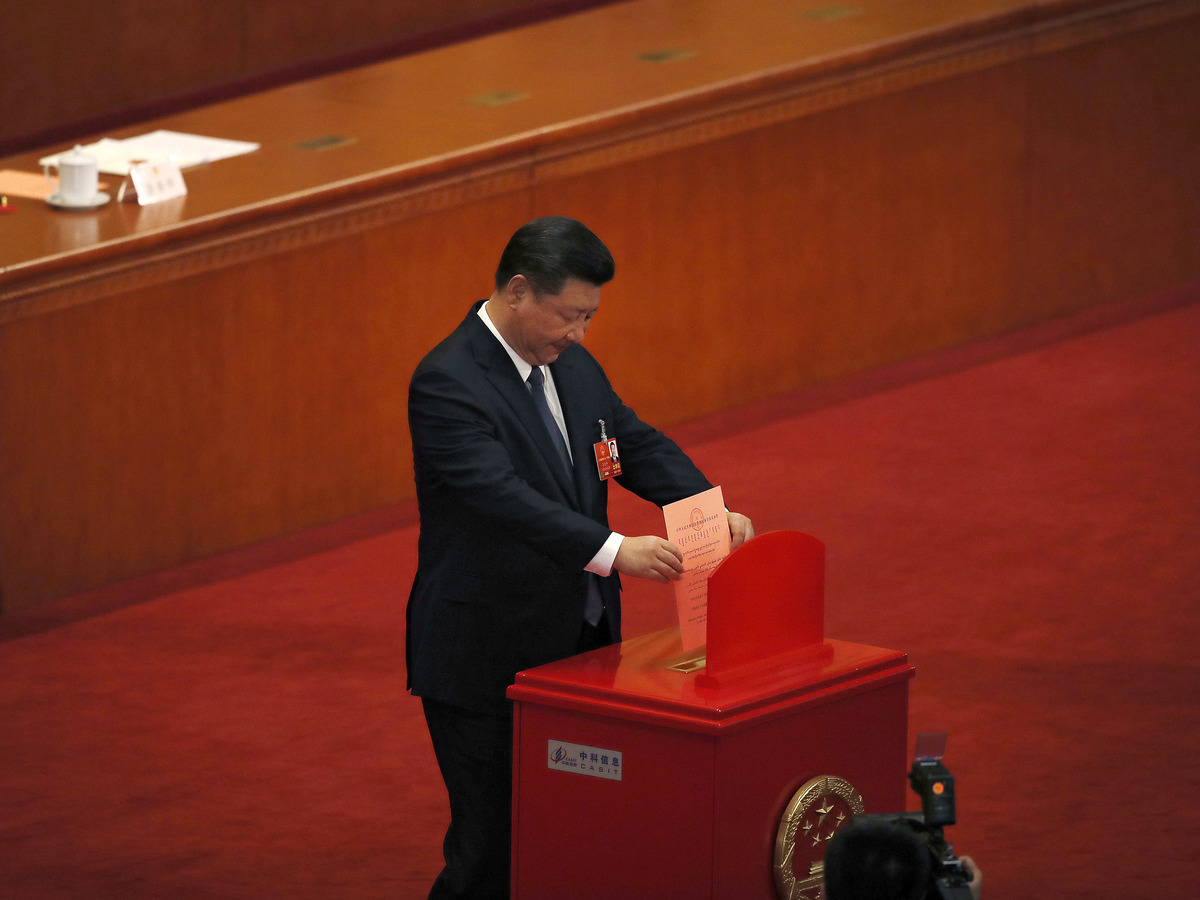 Chinese President Xi Jinping casts his vote for an amendment to China's constitution that abolishes term limits on the presidency, during a plenary session of the National People's Congress at the Great Hall of the People in Beijing on Sunday.

It took just about two weeks from the public announcement to Sunday's legislative vote that erased presidential term limits from the constitution, potentially allowing Xi Jinping to rule China indefinitely.

"After it was announced, the move sent tremors through the Communist Party's intelligentsia," observes Zhang Xixian, an expert on party politics at the Central Party School in Beijing. But thanks to heavy government censorship of media and the Internet, there was little visible debate or opposition to the move.

The term limits were one of a number of political reforms enacted during more liberal times in the 1980s. The ease with which Xi swept the limits away suggests what shallow roots they had sunk into a land dominated for thousands of years by absolute monarchs.

Under the leadership of then-paramount leader Deng Xiaoping, the Communist Party decided in 1981 to "put an end to the virtually lifelong tenure of leading cadres, [and] change the over-concentration of power," in the words of an official document on the subject.

The following year, China amended its constitution, limiting the presidency to two five-year terms. The nation's president has less power than the head of the Communist Party and military, which carry no term limits.

But Zhang says there is an unwritten consensus among senior officials that party and military leadership are also limited to two five-year terms and that leaders at the apex of power would retire at age 68.

The early 1980s changes were largely symbolic, but important. The symbolism is that "while hereditary monarchs rule for life, democracies have presidential term limits," says Wu Guoguang, a political scientist at Canada's University of Victoria. In other words, the rules were intended to make China look like the people's republic it claims to be.

They were also meant to move the country away from decades of turmoil under Mao Zedong, whose violent political campaigns killed millions and took the national economy to the brink of collapse.

But while Deng expected others to stick to the rules, he himself flouted them. He ruled China almost until he died in 1997, despite officially retiring years before.

In fact, only one of China's eight top leaders in nearly seven decades of communist rule has retired and relinquished power on schedule, and that was Xi's predecessor, Hu Jintao. All the others were either purged or found ways to cling to power despite formal and informal regulations.

Tenuous and superficial as the regulations were, Xi's breaking them is historically significant and seen by Chinese liberals as a big step backward.

University of Victoria's Wu points out that Xi frequently exhorts officials not to forget the Communist Party's history and original mission. But just what was that mission?

But, Wu argues, both Communists and Nationalists eventually betrayed their promises and came to resemble what they once tried to overthrow.

The party claims its public opinion surveys show that officials and commoners approve of Xi's performance and want him to stay on. But they have not released any such survey, allowed others to conduct their own or let citizens express their opinions at the ballot box.

However, speak to lawmakers or ordinary people on the street and you will hear from many that they are pleased with Xi's progress in combatting corruption, his more assertive foreign policy and a resulting boost for China's international stature.

The party claims it does not intend for leaders to necessarily rule for life. The Central Party School's Zhang argues that if a leader does not perform well, the party's National Congress can keep him from getting another term. But that remains to be seen.

Crucially, the party argues that abolishing term limits puts the presidency in line with the unlimited tenures for the party and military heads — and that strengthening this "trinity" of leadership is good for long-term political stability.

But Wu points out that the "trinity" has no basis in Chinese law and that the three positions have been separate for most of Communist rule. If anything, he says, the "trinity" is "an institutional manifestation of the overconcentration of power in one person."

The Central Party School's Zhang predicts term limits may one day be rewritten into the constitution and the party charter.

China's "transition from thousands of years of feudal rule to socialist democracy is more complex than we thought," he says. "It may be hard to make the transition stably in less than a century" since the founding of the people's republic.

The full centennial will come in 2049, by which time Xi Jinping will be 96 years old.