Accessibility links
Russians, With No Real Alternatives, Give Putin 6 More Years In Power : Parallels Vladimir Putin has handily won a fourth term as Russia's president, with many voters telling NPR they saw no other viable candidates. 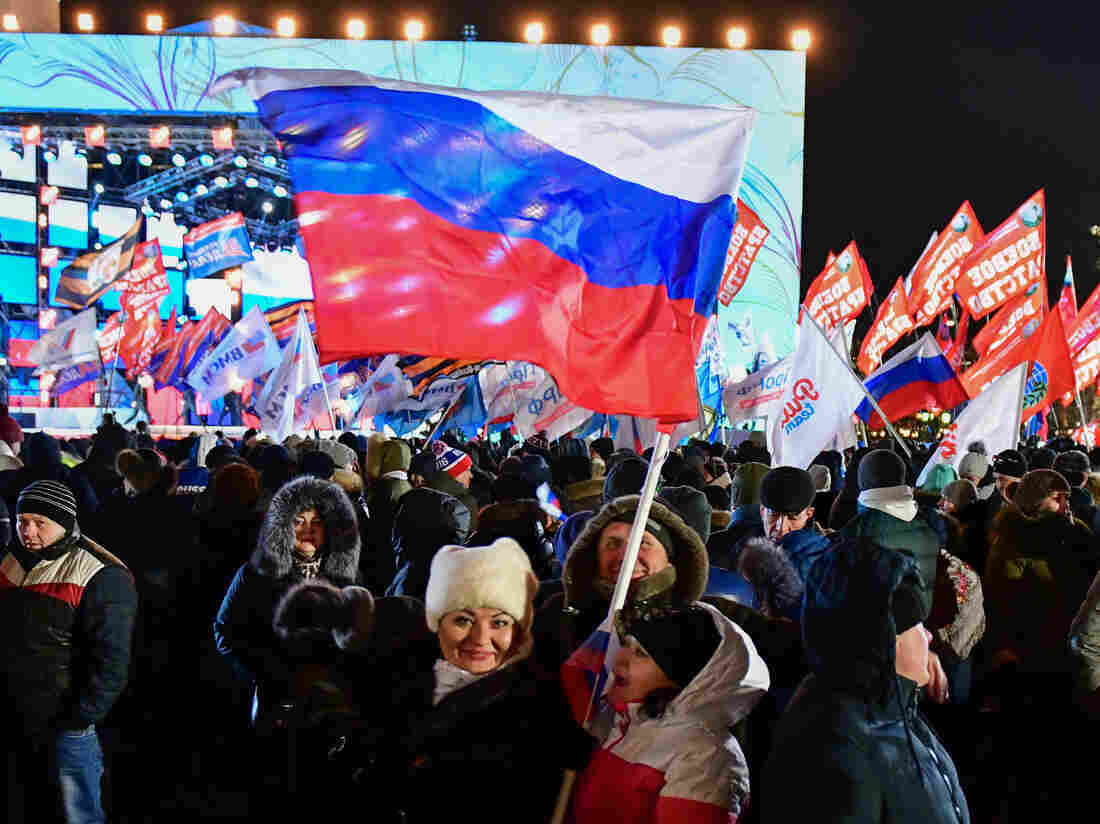 People attend a rally and a concert celebrating the fourth anniversary of Russia's annexation of Crimea at Manezhnaya Square in Moscow on Sunday. The controversial move to take Crimea became a proud event for some voters who handed Vladimir Putin a broad election win, timed for the same date as the anniversary. Mladen Antonov/AFP/Getty Images hide caption 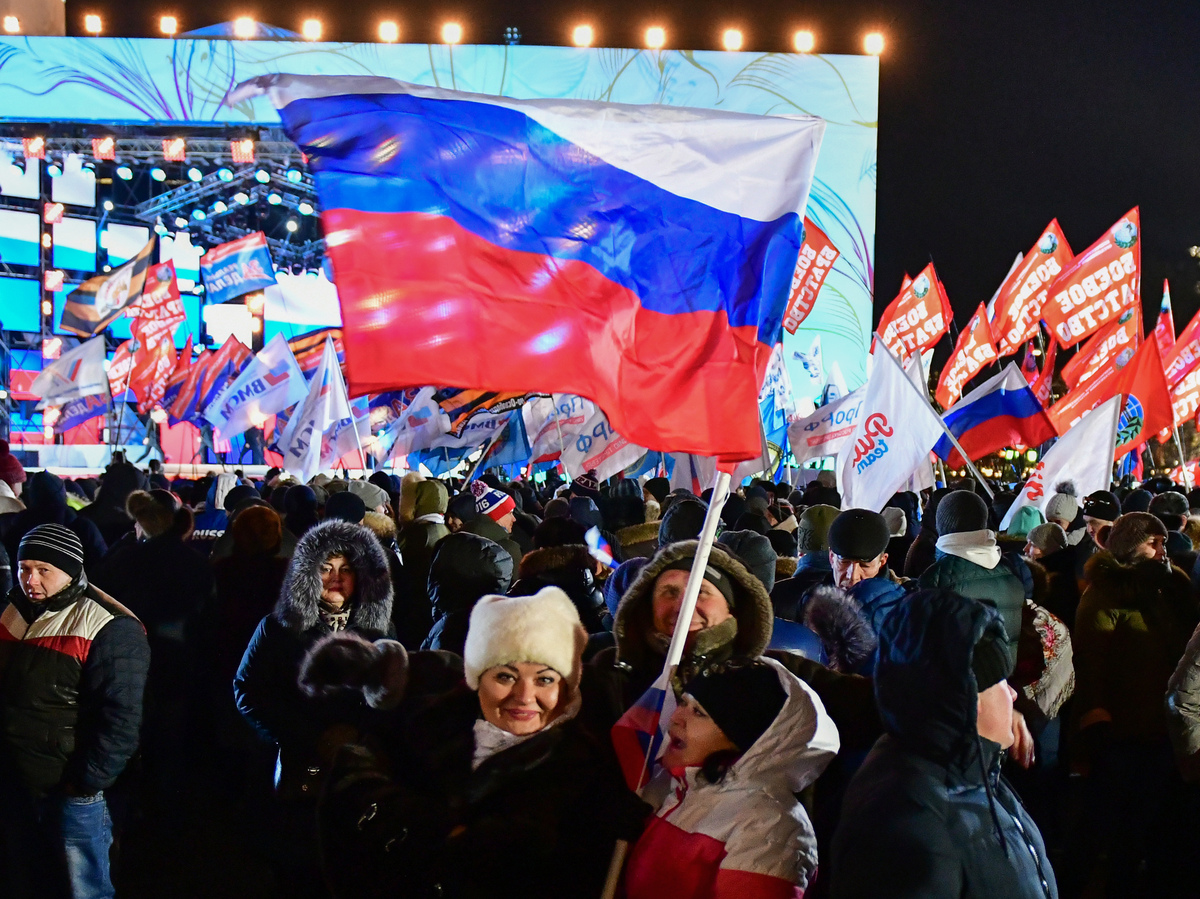 People attend a rally and a concert celebrating the fourth anniversary of Russia's annexation of Crimea at Manezhnaya Square in Moscow on Sunday. The controversial move to take Crimea became a proud event for some voters who handed Vladimir Putin a broad election win, timed for the same date as the anniversary.

Vladimir Putin won a fourth term as Russia's president on Sunday in a vote designed to be more of a referendum on his 18 years in power than a competitive election.

According to official results as of Monday morning, Putin swept up almost 77 percent of the vote, with Communist candidate Pavel Grudinin trailing in a distant second with less than 12 percent. None of the other six pre-approved candidates rose above the single digits.

Opposition leader Alexei Navalny, who was barred from running after organizing nationwide anti-government protests, had called for a boycott of the election and vigorous vote monitoring to uncover any irregularities. But in a country dominated by state media that have helped generate a loyal following, the Putin juggernaut plowed over any obstacles, including accusations of ballot stuffing and other violations.

"Putin is great. We trust and love him. There aren't any other candidates as of yet," said Roza Yarulina, 64, a retired economics teacher who was voting at a polling station in a vocational school in Yekaterinburg, 900 miles east of Moscow, on the geographical border between Europe and Asia.

As a former Communist Party member, Yarulina said she cast her ballot for Grudinin because she was sure Putin would win and wanted to support her second choice. 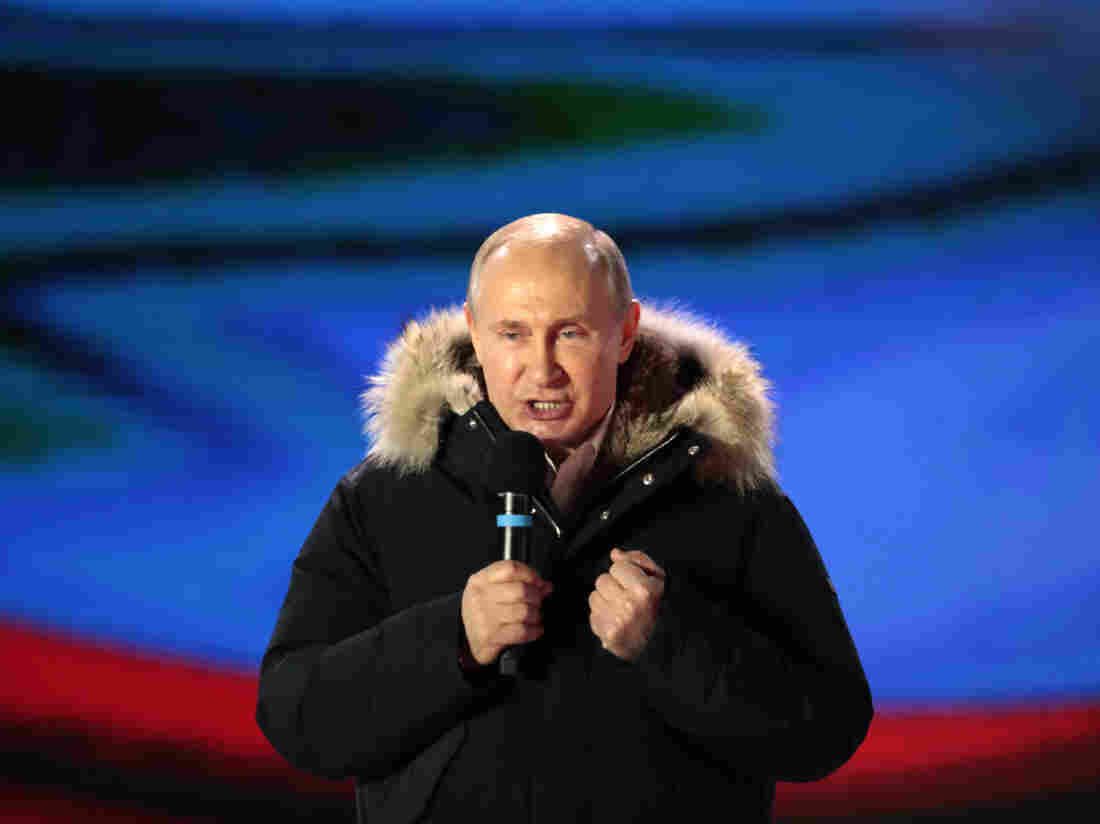 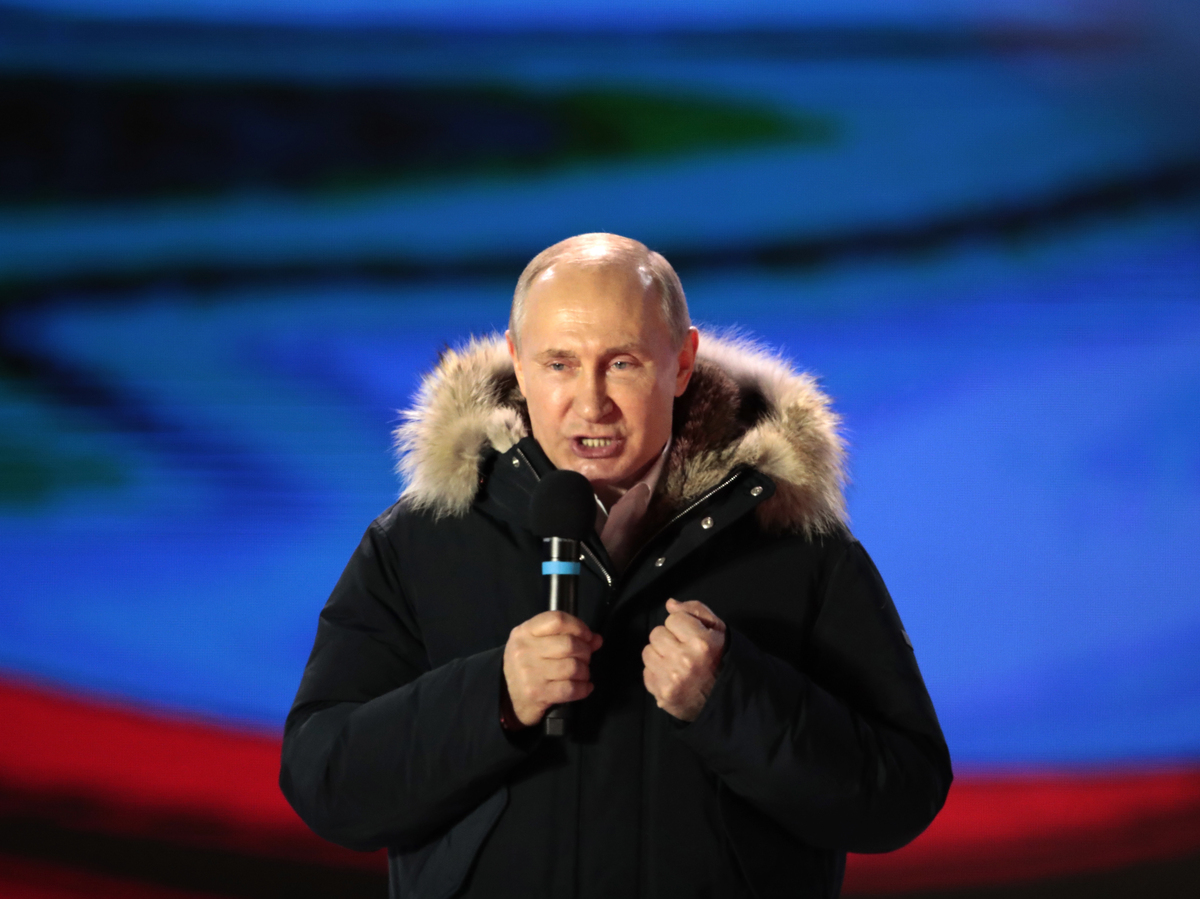 Russian President Vladimir Putin speaks during a rally near the Kremlin in Moscow, Sunday, after exit polls showed him handily winning a fourth term.

Tatyana Ovchinnikova, 65, a retired college instructor dressed in a fur coat, said she respected the incumbent but was voting for Grigory Yavlinsky, a liberal economist who ended up with 1 percent of the vote.

"I've had a dream since I was a kid to put a check mark next to a candidate's name, but it hasn't come true," said first-time voter Grigory Dementyanov, who intentionally spoiled his ballot so someone else couldn't fill it out. The 21-year-old music student said he opposed all the candidates, and that he didn't think Navalny would have been up to the task of leading Russia.

Like other large Russian cities, Yekaterinburg, with a population of 1.4 million, is more supportive of opposition candidates. But in multiple interviews across the country, voters voiced a combination of anxiety and frustration over the lack alternatives to Putin.

After garnering a record election win with more than 55 million votes in his fourth presidential run, Putin, 65, now has a strong mandate to rule Russia for another six years.

For many Russians, the predictability of Putin's reign is preferable to new political upheavals.

"We Russians just don't want things to get any worse. You Americans always expect things to get better," said Anton Volkhin, 36, a distributor in Yekaterinburg for a national sausage company and the father of two. "Too many people have too much to lose. Those who don't are still in the minority." 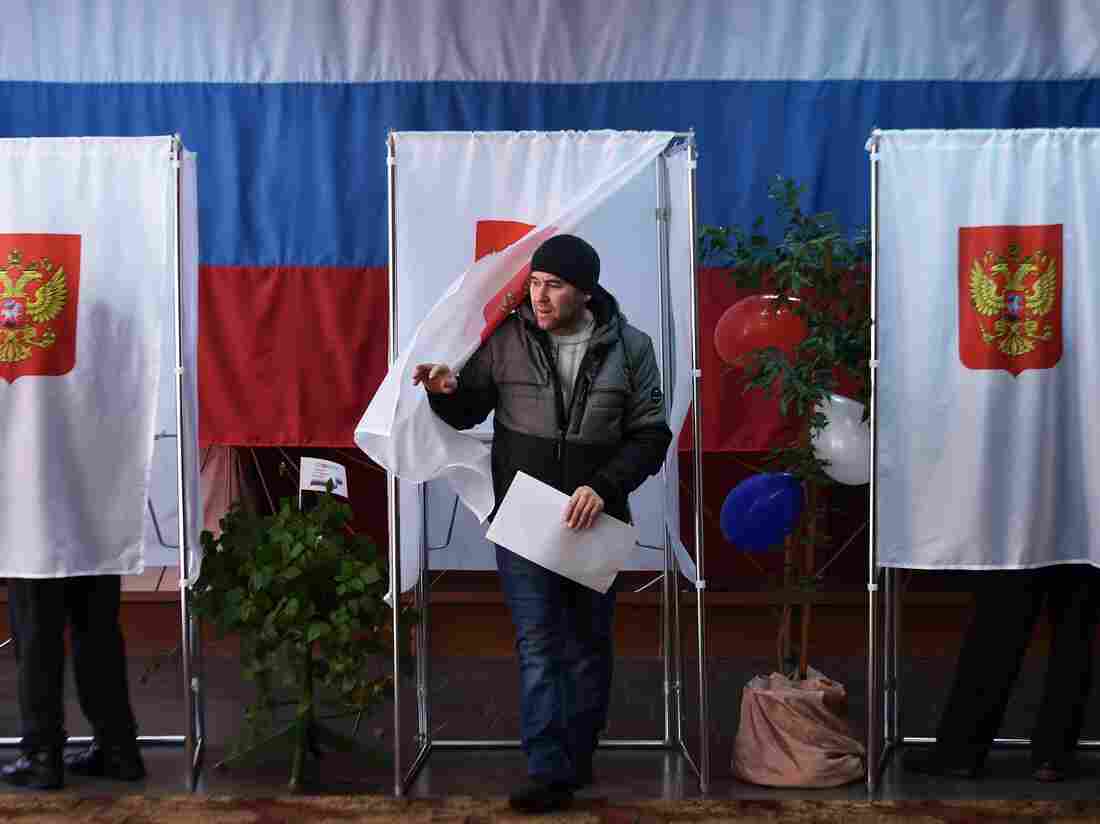 A man walks out of a voting booth at a polling station during Russia's presidential election in the village of Novye Bateki. Sergei Gapon/AFP/Getty Images hide caption 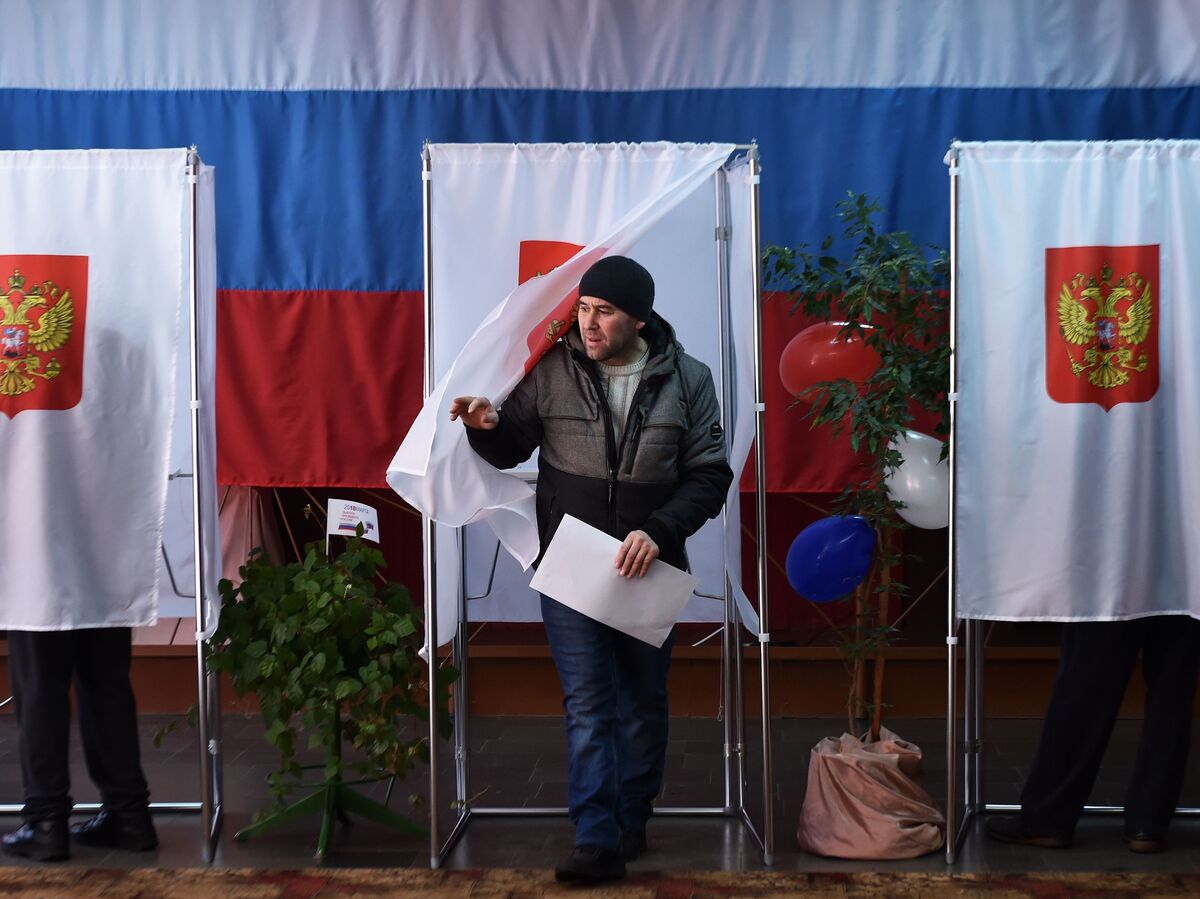 A man walks out of a voting booth at a polling station during Russia's presidential election in the village of Novye Bateki.

In a country that has experienced a revolution, civil war, slave labor camps, a Nazi invasion and the collapse of an empire all within the past century, many Russians express relief that at least war hasn't reached their territory. Putin's military intervention in Ukraine is widely seen by Russians as a defensive move against encroachment by the United States, while Russia's 2 ½-year participation in Syria's civil war barely registers with ordinary people.

"Honestly, I'm afraid, very afraid, that war will break out," said Yelena Okhotenko, 36, who serves in the Russian military. "There's constantly this aggression toward us, and we're constantly holding back. I don't know how long our country can hold out."

The mother of two children, Okhotenko said she has been supporting Putin since she first could vote, in 2000. "This president did very much for Russia and my town and personally for me and my family," she said, standing on the refurbished embankment in the city Nizhny Tagil. "He raised up our country, and he raised our quality of life."

Niznhy Tagil, a two-hour drive north of Yekaterinburg, has been nicknamed "Putingrad" for the president's visits to the city's giant tank factory.

"You can't talk about Putin's level of support, but the level of fear," said Pavel Sergienya, 35, the founder of an independent trade union. "People are afraid to openly express their opinion except in their kitchens, just like in the Soviet Union."

Andrei Antropov is an exception. The 36-year-old volunteer for opposition leader Navalny was called in by the police three days before the election for a "conversation" with criminal investigators.

"I can't rule out that there will be consequences for me at work, but I'm going to continue my activism," said Antropov, a manager for a telecommunications company. 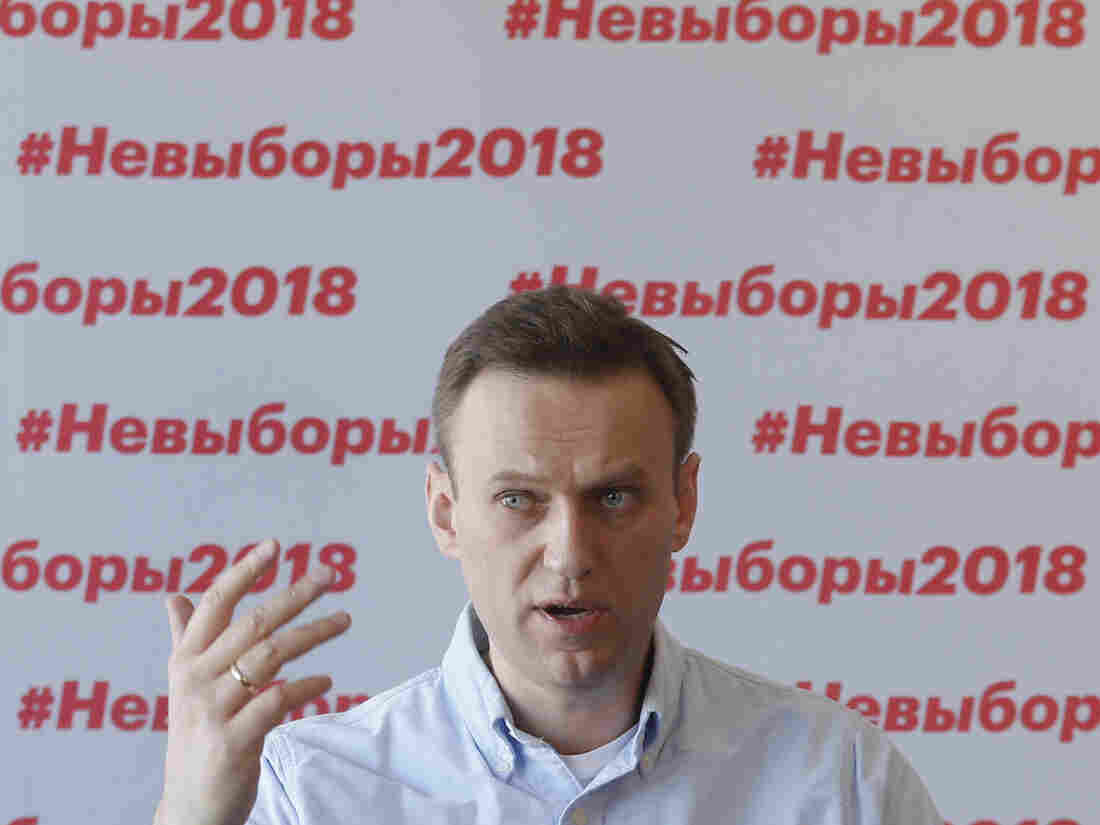 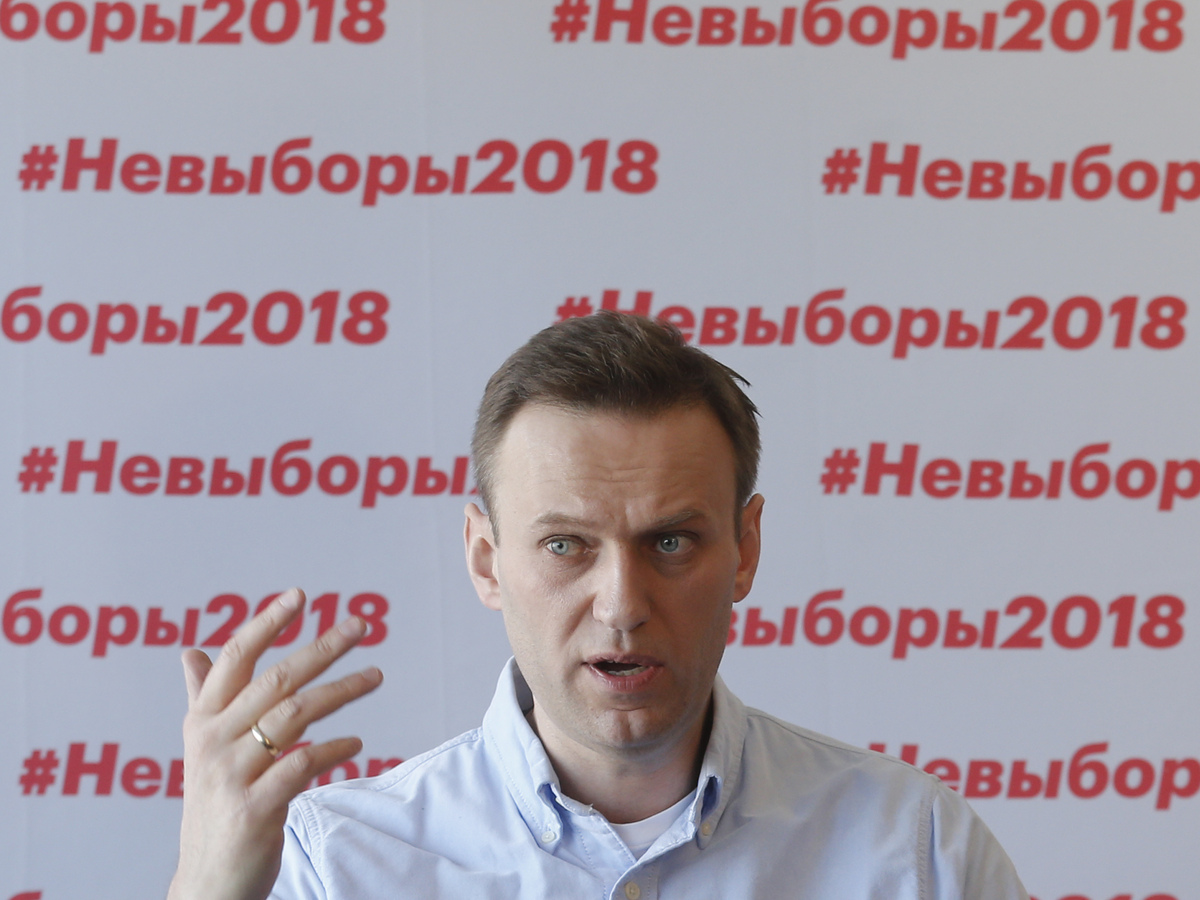 Russian opposition leader Alexei Navalny holds a briefing on the presidential election at his office in Moscow on Sunday.

Navalny, who spent a year building a nationwide network of campaign offices and volunteers before his candidacy was denied, focused on domestic issues such as economic stagnation and government corruption.

Putin, on the other hand, highlighted Russia's return to the world stage as an independent actor that could stand up to U.S. hegemony.

"Strange as it may seem, in Russia economic problems don't convert well into political decisions," said Dmitry Kolezev, 33, the deputy editor of Yekaterinburg's independent news site znak.com. "People will tighten their belts, but they won't hold the Russian government responsible for their problems as much as, say, the United States, which imposed sanctions on Russia."

The U.S. and European Union hit Russia with economic sanctions for annexing Crimea and backing an armed uprising in Ukraine's Donbas region in 2014. That year marked the start of a downward spiral in relations between Russia and the West.

In the week before the presidential election, those tensions increased. Britain expelled 23 Russian diplomats after accusing Moscow of being behind the poisoning of a former Russian spy on British soil. The Trump administration imposed sanctions on Russians suspected of being behind election interference and cyberattacks. Far from hurting Putin, the news added to the Kremlin's narrative that Western countries are unfairly targeting Russia for unproven transgressions.

In the runup to the vote, Putin played up his decisiveness in seizing the Crimean Peninsula from Ukraine, and the election date was scheduled to coincide with the fourth anniversary of the annexation. Given that many Russians vacation in Crimea or have family there, the association was supposed to evoke a sense of pride and defiance.

"I'm voting for Putin for the first time in my life. Russia is the kind of country that always rallies around its leader in tough times," said Dmitry Ardanov, 41, an office security guard in Vladivostok on Russia's Pacific coast. "Putin did one important thing, and after that I understood he's a real man: He took back Crimea and supported Donbas."

A recent poll by the independent Levada Center shows 86 percent of Russians support the annexation of Crimea, and opposition figures such as Navalny turned off voters by questioning the legitimacy of the controversial separatist referendum, which was held after Russian troops had occupied the peninsula.

What unites Putin's most ardent supporters and vociferous foes is uncertainty over what comes next.

"We're in a situation where there aren't any worthy alternatives, so all that's left is the hope that Putin can accomplish something in domestic politics," said Rim Averyanov, 27. He quit his job as a school teacher in the provincial town of Vladimir because of his low salary and is going into the private sector in Moscow.

Averyanov, who opposes Putin, said he's afraid a new revolution could break out if the Kremlin fails to address pressing economic issues that are impoverishing the population. But like many government critics, Averyanov said he doesn't view Navalny as a leader tough enough to take on Russia's myriad problems.

Even before preliminary election results were in Sunday evening, Navalny appeared on his YouTube channel debating Ksenia Sobchak, a pro-Western candidate who picked up less than 2 percent of the vote. Navalny rejected her offer to join forces, calling her a Kremlin tool and a "champion of hypocrisy" for participating in the elections.

Squabbles inside Russia's fractured opposition hardly raise their profile as a viable alternative to Putin.

Sofia Kastilo, a 28-year-old English teacher in Tula, 100 miles south of Moscow, called Navalny and Sobchak "clowns." Kastilo said she didn't believe that Navalny, who has built his popularity as an anti-corruption campaigner, could uproot graft.

"Speaking about corruption: well it existed, it exists, and it will exist," Kastilo said. "If Navalny becomes president, where is the guarantee that there won't be any corruption? There is no guarantee."

Like many Russians, Kastilo voiced concern about who will come after Putin when his fourth term comes to an end in 2024.

According to Russia's constitution, no president can serve more than two consecutive terms.

Asked after his victory if he wants to change the law, Putin said he had no such plans — yet.