Accessibility links
After Election Landslide, It's Putin's Russia (More Than Ever) : Parallels Vladimir Putin wanted a mandate to govern, and got it, with 76 percent of the vote. He will use the next six years to advance his mission: cementing Russia's role as a major player on the world stage. 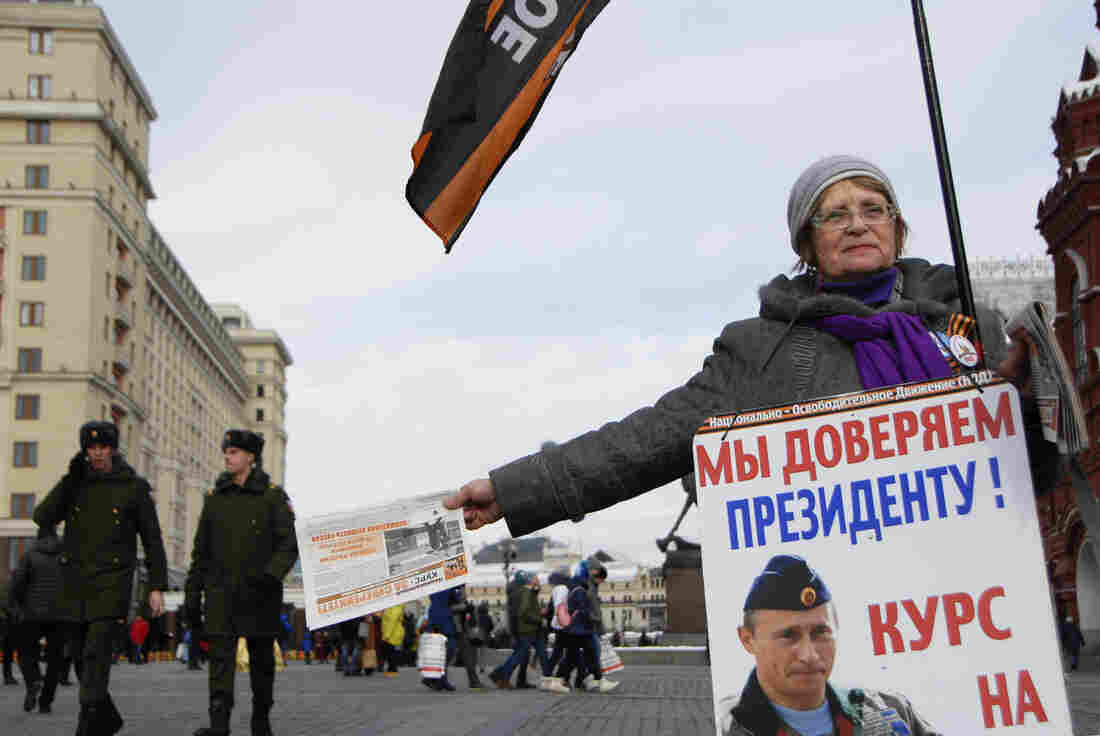 A supporter of Russian President Vladimir Putin campaigns for him in Red Square in central Moscow. Jolie Myers/NPR hide caption 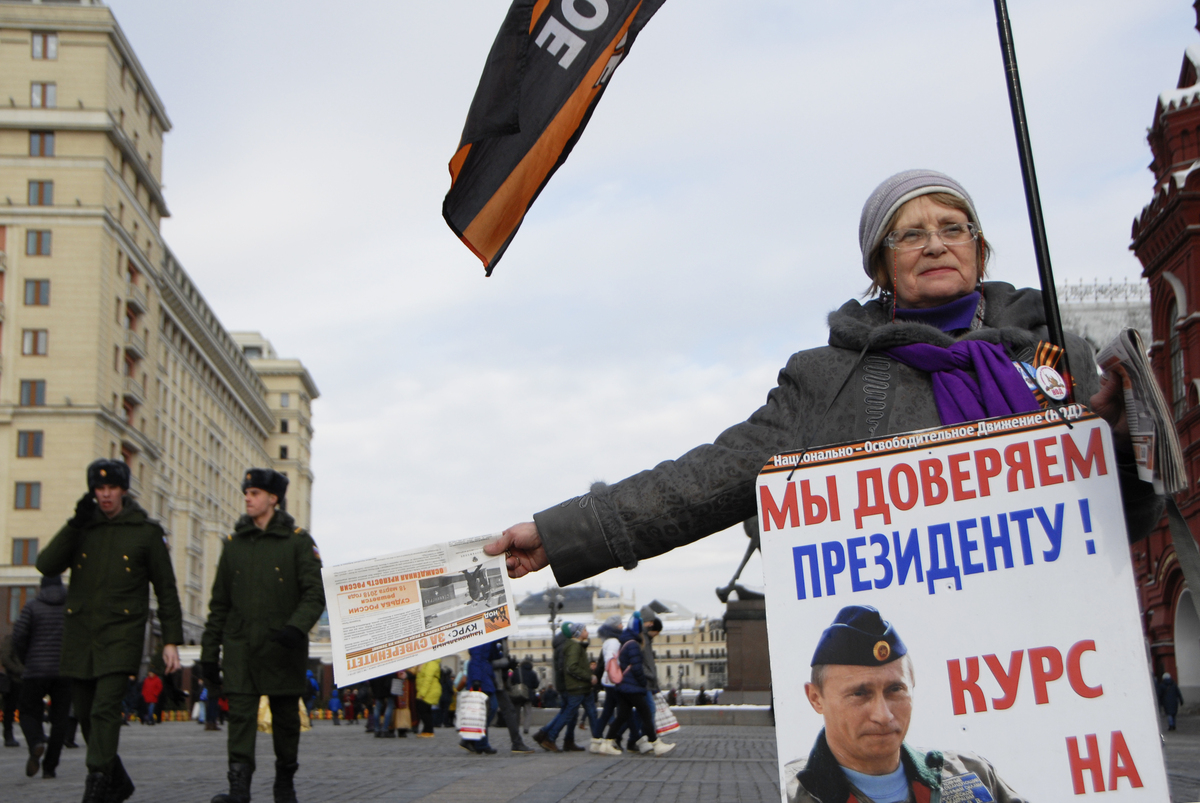 A supporter of Russian President Vladimir Putin campaigns for him in Red Square in central Moscow.

Vladimir Putin won re-election with a landslide victory: 76 percent of the vote. That win puts him on track to rule until 2024 — nearly a quarter century in power, second only to Stalin as far as Kremlin leaders go.

What does another six years mean for Russia?

"Given the fact that this time should be his final term, I think his mission can be formulated as: to guarantee that the system he's erected, which brought Russia back to the world stage as a significant player after a pretty big demise in [the] 1990s ... will survive him," veteran journalist Fyodor Lukyanov told NPR's All Things Considered in Moscow on Monday.

Lukyanov is editor-in-chief of the foreign policy journal Russia in Global Affairs.

These excerpts have been lightly edited for clarity.

On what this victory means for Putin and his mission

To believe that an authoritarian ruler is just a cynical manipulator, it's not fair. And I think Putin is not that kind of person. He believes in his particular mission, and he believes in his connection to people. ...

If he [believed] that this system cannot exist without him, that will be perceived by him as a defeat.

Putin ... embodied what Russian people wanted to see after a very turbulent period of the collapse of the Soviet Union. But the [flip side] of this is that the legitimacy of the whole system is actually equal to his personal legitimacy. ...

He cannot just go and put in a successor ... because this place is suited for him. No person after him will have his kind of relationship to the Russian nation. This person will have to develop his own way, but to do this he will need time, and to guarantee that during this time the system will not collapse, he will need some institutional changes as well. 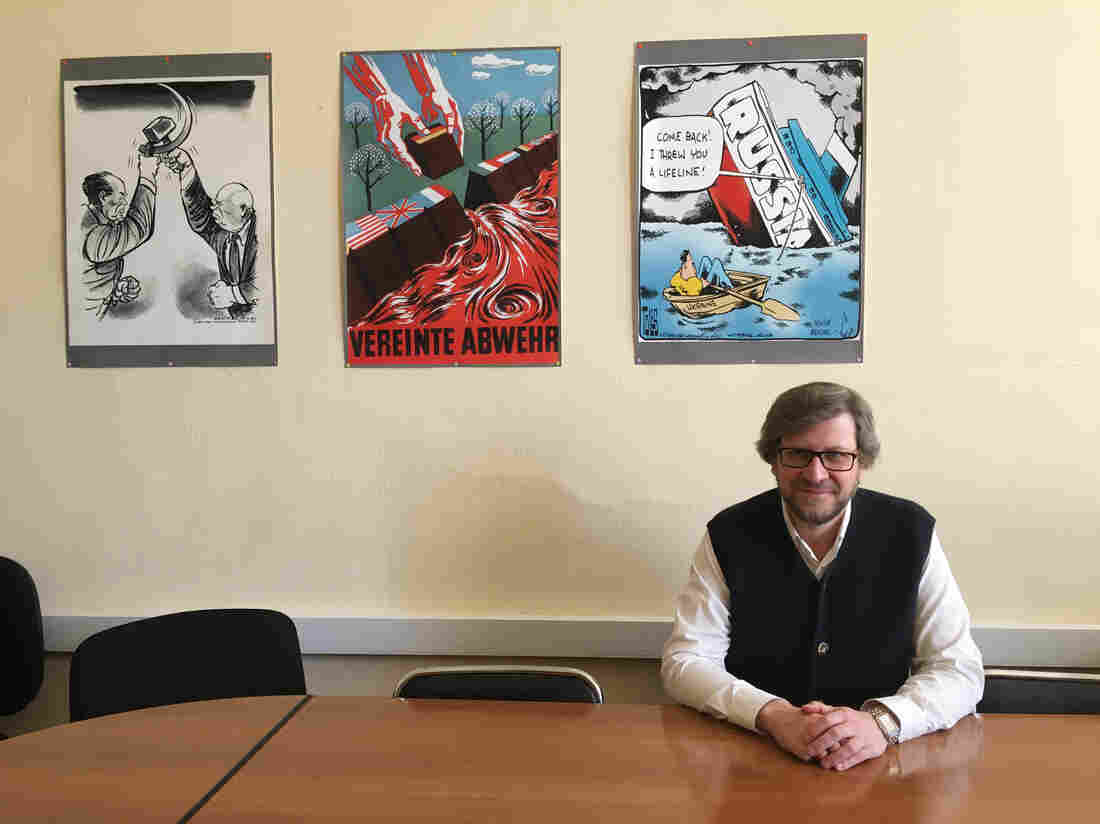 Fyodor Lukyanov is the editor-in-chief of Russia in Global Affairs, a journal the examines Russia's role in the world. Jolie Myers/NPR hide caption

On a message of stability, despite chaotic international relations

The question is, to what extent do people in Russia feel "hurt" by, for example, expulsion of Russian diplomats from Britain, or new sanctions imposed by the U.S.? ... It doesn't touch [the average Russian]. ...

If you compare the narrative now and, say, 10 years ago – the Russian discussion was much less homogeneous, and those who claimed that Russia was to blame were not the majority, of course, but a significant minority. Now ... you hear voices in support to the Western position, but very few.

On Russians' faith in Kremlin denials of wrongdoing

When I followed the [2016 presidential] campaign in the United States, I was pretty shocked. Because previously I believed that paranoia is a Russian business. So I'm afraid that we are in big trouble for one simple reason: because all the major actors have such huge domestic problems, that foreign policy issues are becoming, everywhere — Russia, China, U.S., Britain, Germany — a means to address this. And this is terrible.