Accessibility links
Opinion: What Trump Needs To Know Before Talks With North Korea : Parallels If President Trump winds up across the table from Kim Jong Un, he should study the lessons from previous attempts to denuclearize North Korea, writes Scott Snyder. 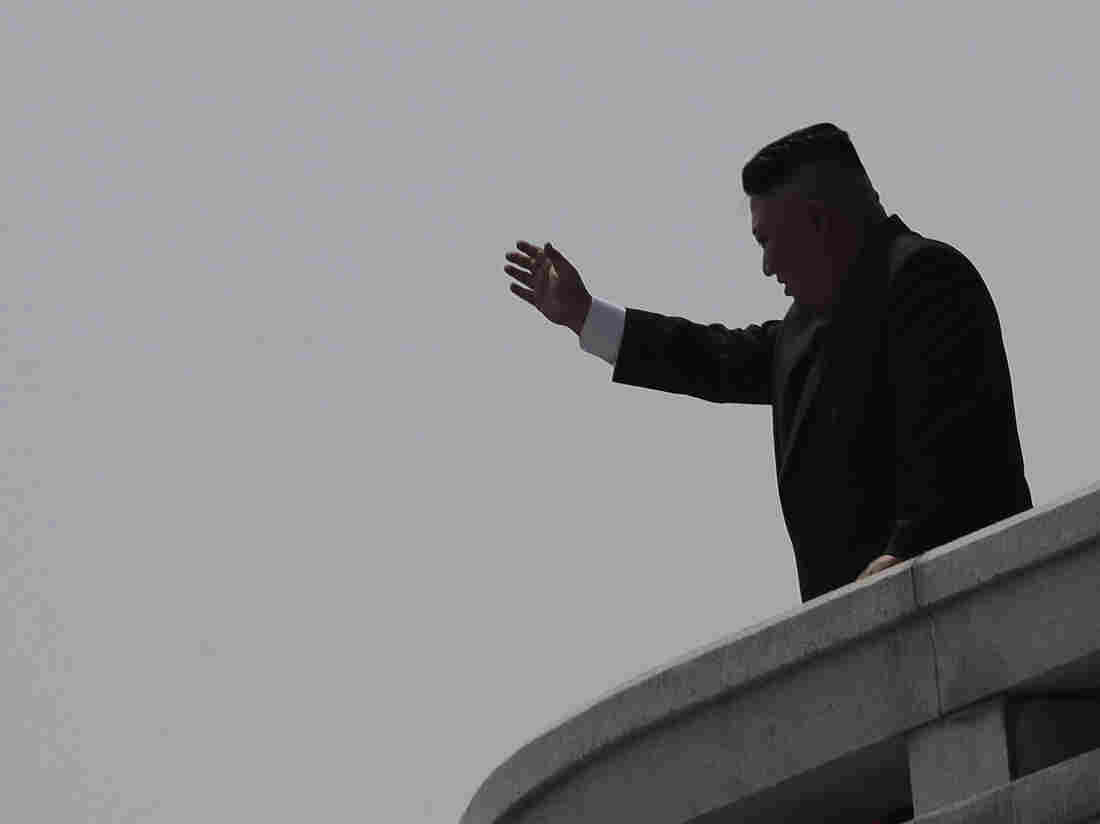 North Korea's Kim Jong Un waves during a military parade in Pyongyang celebrating what would be the 105th birthday of his grandfather and the country's founding leader Kim Il Sung. Wong Maye-E/AP hide caption 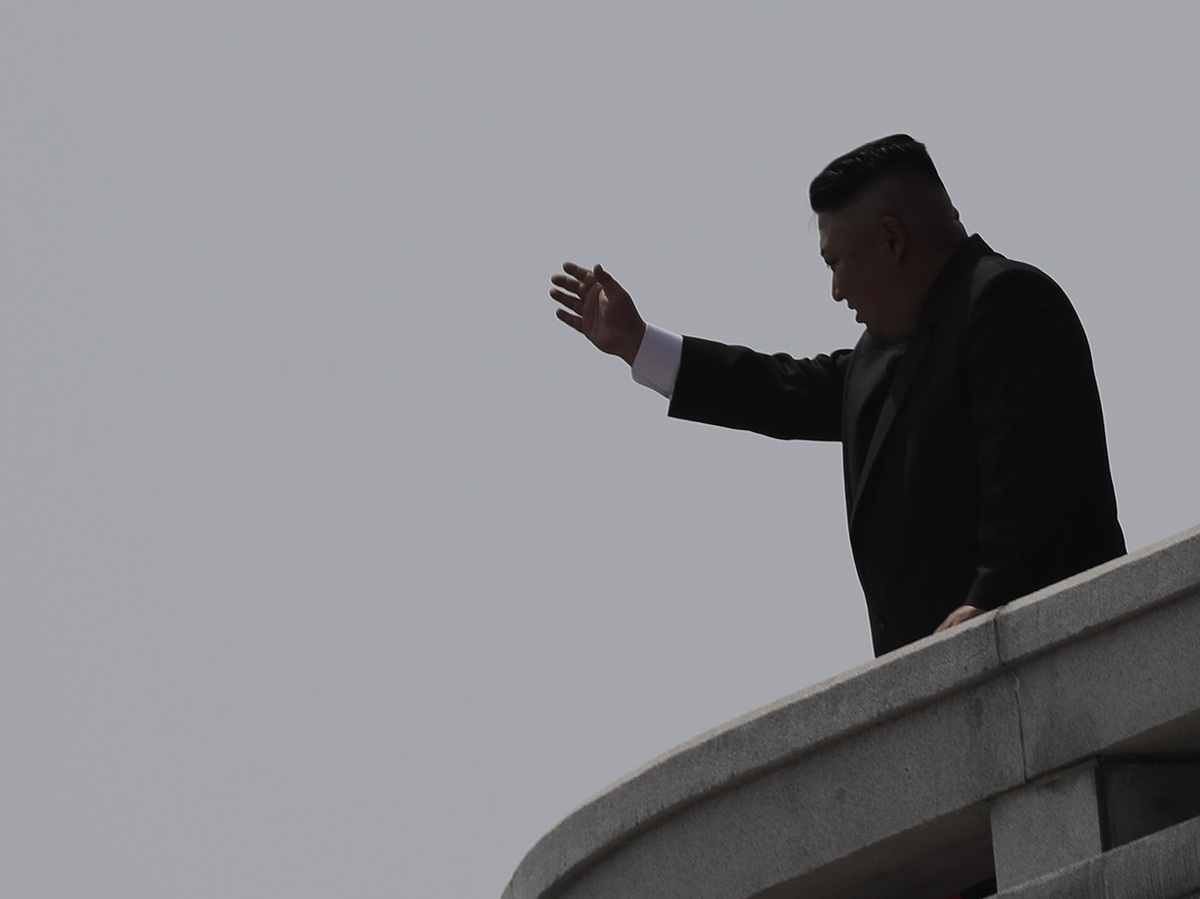 North Korea's Kim Jong Un waves during a military parade in Pyongyang celebrating what would be the 105th birthday of his grandfather and the country's founding leader Kim Il Sung.

Scott Snyder is senior fellow for Korea studies at the Council on Foreign Relations and author of South Korea at the Crossroads: Autonomy and Alliance in an Era of Rival Powers.

North Korea has earned a reputation as a country that knows how to play a weak diplomatic hand well. Or at least, it is known to have confounded U.S. negotiators and persisted in its nuclear drive by hook or by crook, despite both its relative weakness and repeated American efforts to halt and reverse North Korea's nuclear development.

What lessons should the U.S. government bear in mind if President Trump indeed ends up sitting across the negotiating table from Kim Jong Un, and what should Trump do differently?

Kim Jong Un is different from his father and grandfather. President Trump is also unmistakably different from his predecessors who have dealt with North Korea. Here are some lessons from prior negotiating experience between the countries.

North Korean ideology places the country at the center of global attention and as the most important item on the U.S. agenda. At moments when it becomes the biggest global crisis, North Korea draws top-level attention, as President Trump has shown. But when the crisis abates, American presidents have a tendency to move on to other crises, even though North Korea continues to demand attention. 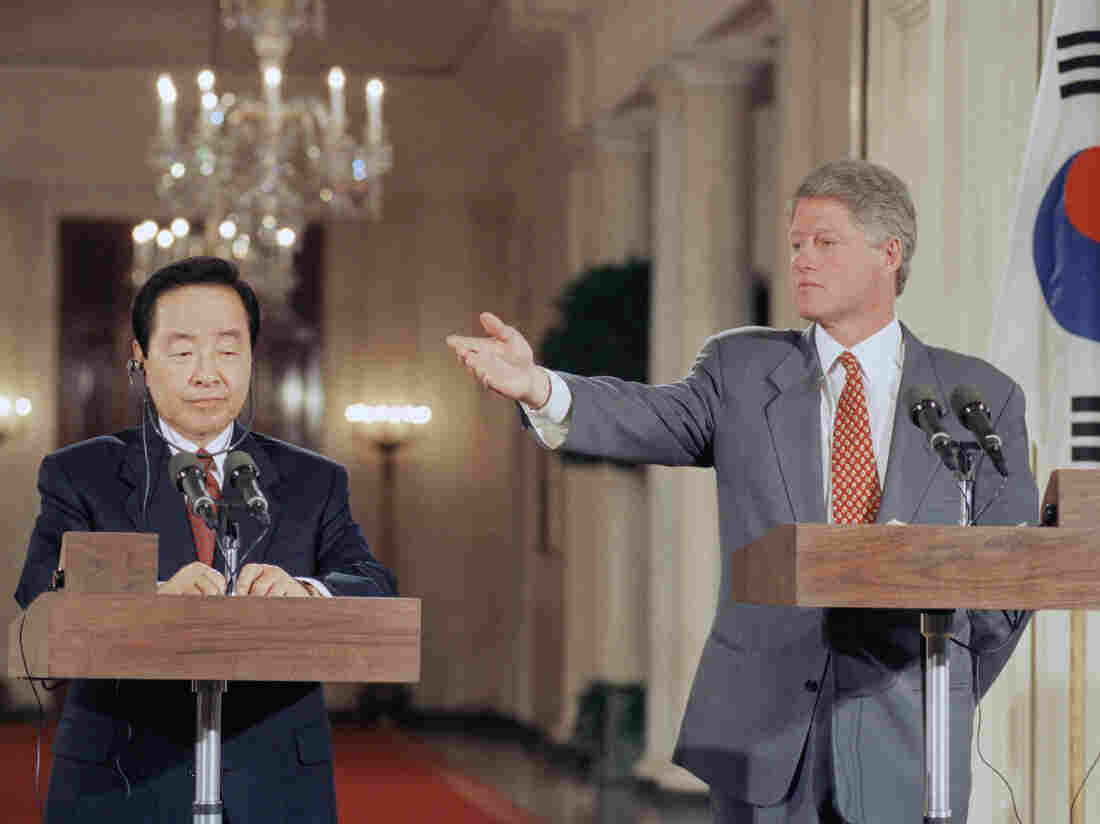 Former President Bill Clinton gestures during a joint news conference with then-South Korean President Kim Young-sam in the White House in 1993. At the time, Clinton said that the U.S. was ready to resolve "once and for all" its differences with North Korea if the communist regime resumed talks with South Korea and allowed outside inspections of its nuclear program. Ron Edmonds/Associated Press hide caption 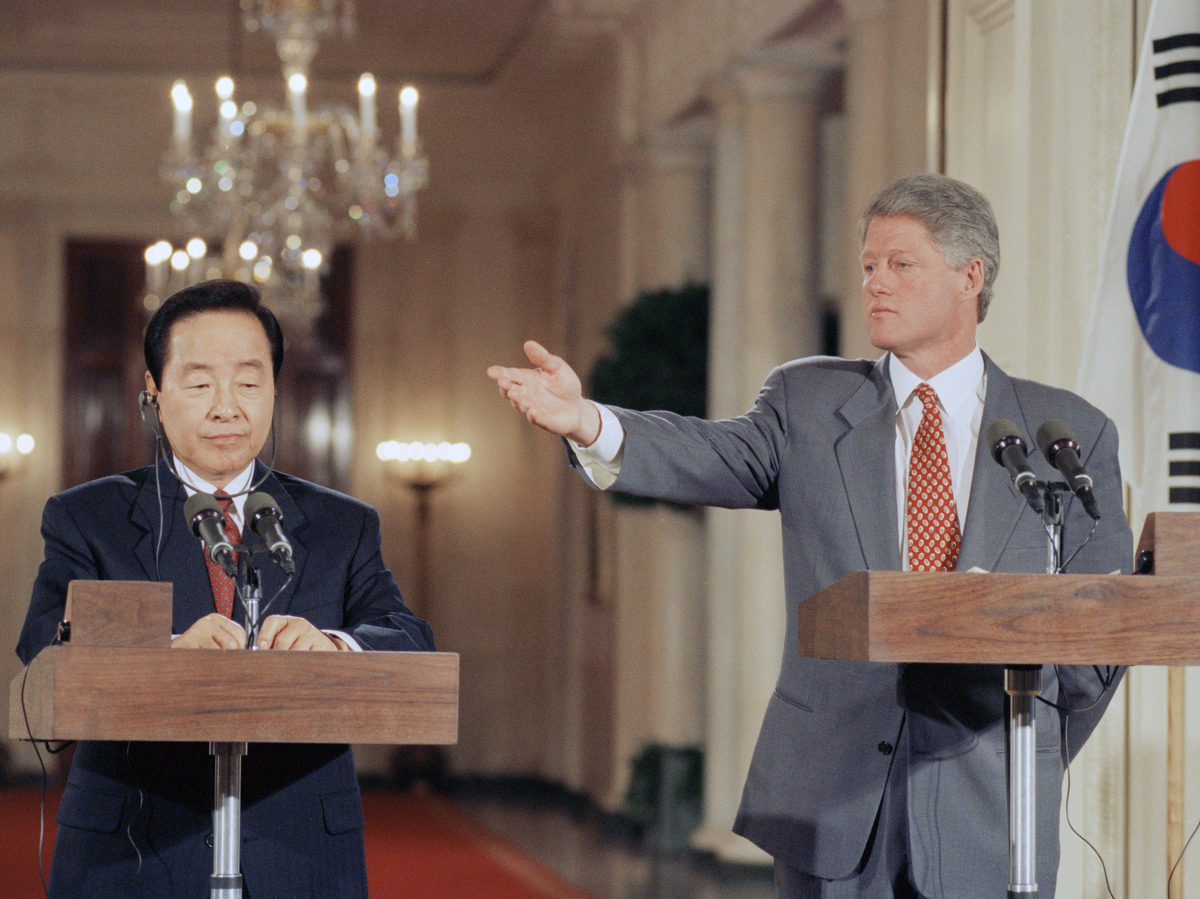 Former President Bill Clinton gestures during a joint news conference with then-South Korean President Kim Young-sam in the White House in 1993. At the time, Clinton said that the U.S. was ready to resolve "once and for all" its differences with North Korea if the communist regime resumed talks with South Korea and allowed outside inspections of its nuclear program.

During Clinton-era negotiations, the issue received top-level attention until the United States and North Korea signed the Agreed Framework in Geneva in 1994. But the Clinton administration did not hold North Korea's feet to the fire to implement the deal.

One result of the Clinton administration's failure to pay sufficient attention to implementing the agreement is that it provided space for North Koreans to cut corners and eventually pursue an alternative covert uranium enrichment path to securing materials for a bomb.

Whatever the merits of any agreement Trump may achieve with Kim, it will mean nothing unless the president and his staff are willing to see the deal through to implementation. Otherwise, the North Koreans will exploit the American attention deficit and push forward once again with nuclear development.

2. North Korea has tried limiting the scope of negotiated commitments to avoid denuclearization

In six-nation talks a decade ago, the North Koreans skillfully forced the United States to make a choice between addressing the urgent question of plutonium pathways to making a bomb at the expense of including North Korean uranium enrichment efforts on the negotiating agenda. North Korea also limited negotiations and inspections to the site of its 5 megawatt reactor at Yongbyon in an effort to restrict verification of all aspects of its nuclear program. Christopher Hill, lead U.S. negotiator in the Six-Party Talks, accepted limitations on the agenda as an expedient way to start North Korea's denuclearization, but the process broke down before a broader verification of the country's entire nuclear program could begin. Today, verifying the scope of the program is even more difficult because of the North's uranium enrichment efforts, which are harder to assess and easier to hide.

North Korea has pursued nuclear development as a strategic goal for decades, even though the United States insists on comprehensive, verifiable, irreversible denuclearization of the North. But this means North Korea has what the United States wants, enabling Pyongyang to drive up the price for concessions while minimizing the likelihood that it will ever give up its nuclear weapons. American diplomacy has succeeded in pausing, but not reversing, North Korea's nuclear aspirations. In this respect, the North's decision to walk away from the "action for action" formula underlying the Six-Party Talks deal of a decade ago — denuclearization in exchange for normalization and economic development — provided a severe blow to prospects for diplomatic resolution of the nuclear issue.

4. Trump's challenge: securing a denuclearization quid pro quo for his acceptance of Kim

Absent a North Korean commitment to returning to an action for action deal, there are risks that a turn toward diplomacy may provide the country with relief from maximum pressure as the primary instrument to achieve its denuclearization. The Trump administration will need to restore North Korea's commitment to action for action as a prerequisite to the easing of sanctions.

Instead, North Korea is requesting something much bigger: that the United States end its "hostile policy" toward Pyongyang, including likely demands for U.S. troop withdrawal from South Korea, with all that may imply for the continuation of American security commitments to South Korea.

By offering Kim the unprecedented gesture and prestige of a meeting with a sitting U.S. president, Trump will have symbolically exceeded North Korea's demands for a bold switchover from hostility to acceptance. But North Korea has pocketed past concessions to its demands while continuing on the same path, rather than offering quid pro quos. Given the North's long-standing commitment to its nuclear development, the greatest risk in Trump's unorthodox determination to meet with Kim if the Trump administration insists on denuclearization is that Kim may not be able to take yes for an answer.