Accessibility links
How The Syrian Regime Keeps Winning Territory, From An Army Defector's Perspective : Parallels What's happening in eastern Ghouta shows parallels with earlier offensives, from siege to surrender, according to a soldier turned rebel leader. 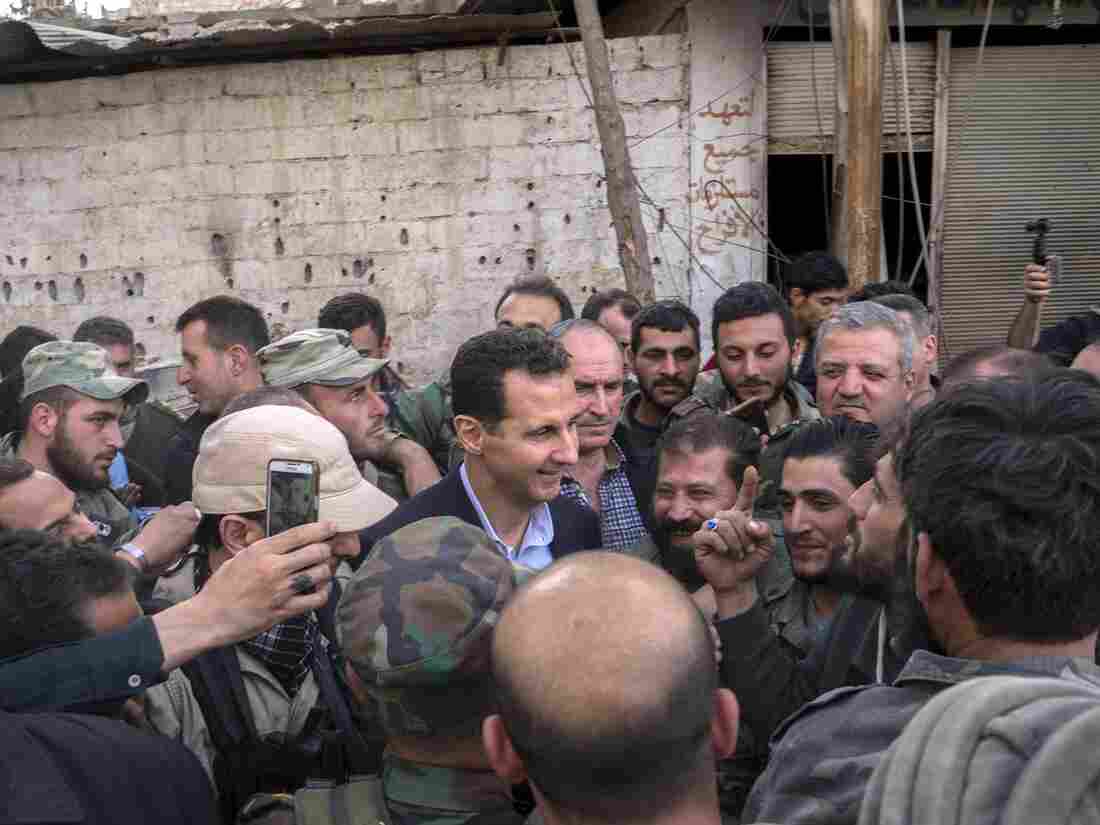 Syrian President Bashar Assad, center, speaks with Syrian troops in newly captured areas of eastern Ghouta, near the capital Damascus, Syria, Sunday. Al-Ikhbariya TV broadcast images of Assad surrounded by soldiers on a street in eastern Ghouta, where a Syrian offensive has been underway over the past month. It was not clear where in eastern Ghouta Assad was. Syrian presidency Facebook page via AP hide caption 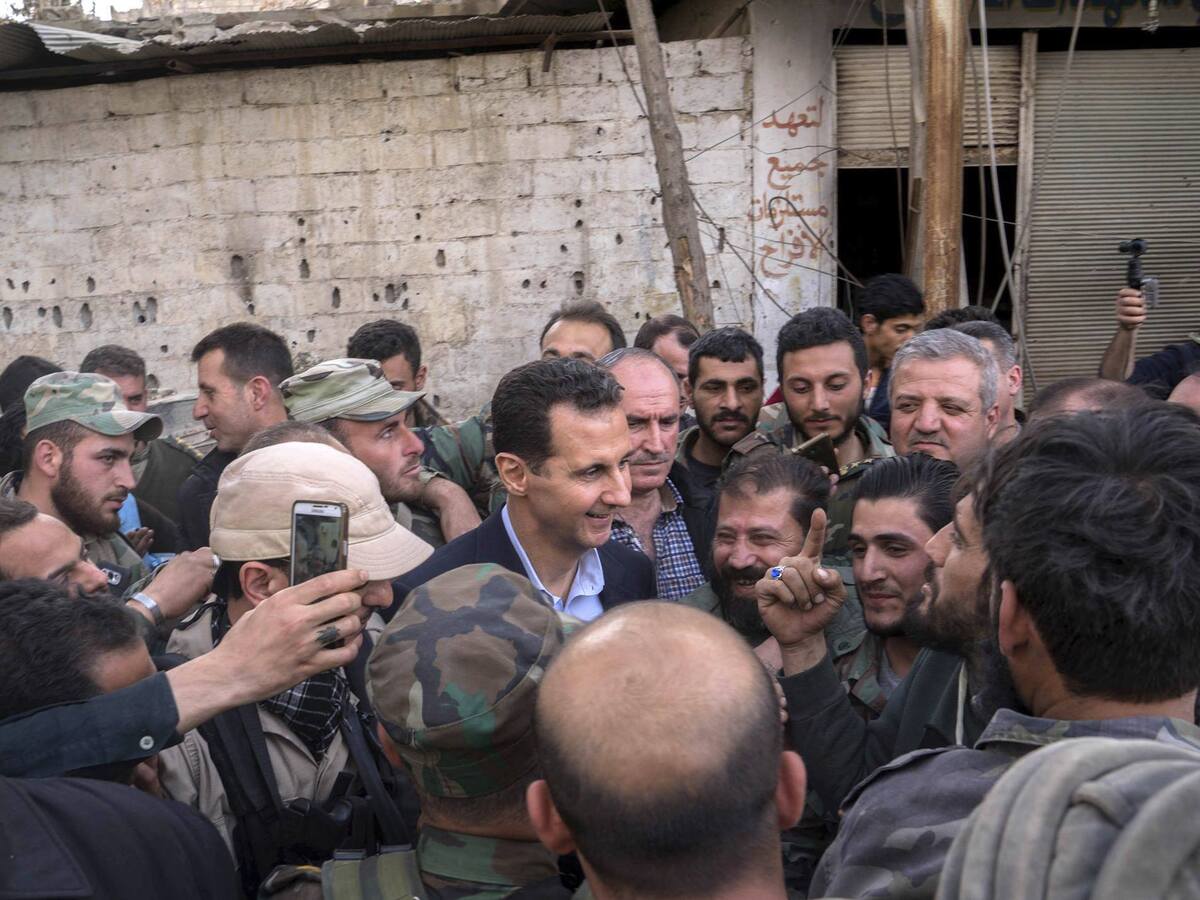 Syrian President Bashar Assad, center, speaks with Syrian troops in newly captured areas of eastern Ghouta, near the capital Damascus, Syria, Sunday. Al-Ikhbariya TV broadcast images of Assad surrounded by soldiers on a street in eastern Ghouta, where a Syrian offensive has been underway over the past month. It was not clear where in eastern Ghouta Assad was.

Dressed in a sharp black suit, Syrian President Bashar Assad smiles for selfies with his soldiers against a backdrop of blown-out buildings and a battered tank. Weary-looking men crowd around him and chant the slogan frequently heard on this side of the country's war: "With our souls and blood, we will sacrifice ourselves for you, Bashar!"

This week, pro-regime media posted photos and videos of Assad visiting what they claimed was a town regime forces had recently captured in eastern Ghouta, an area east of the capital Damascus.

The message was clear: Assad is projecting confidence that the region will soon surrender to his control.

Even as the regime makes gains elsewhere in the country, tens of thousands of heavily armed rebels in eastern Ghouta — just miles from the presidential palace in the capital — continue to pose a serious threat.

Now after years of siege, airstrikes and shelling attacks by the regime and its allies, ground troops have pushed inside the suburbs, splintering the opposition enclave into separate parts. 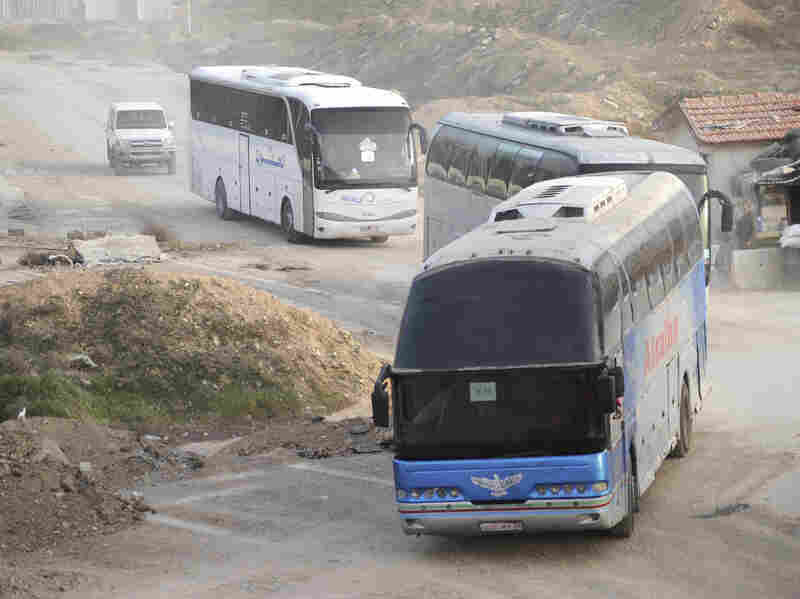 The evacuation by bus of rebel fighters and their families in eastern Ghouta, Syria. Buses from the Syrian Ministry of Transport and Syrian Red Crescent vehicles were seen on the outskirts of Harasta on Thursday, after crossing the last Syrian Army checkpoint before the town. SANA via AP hide caption 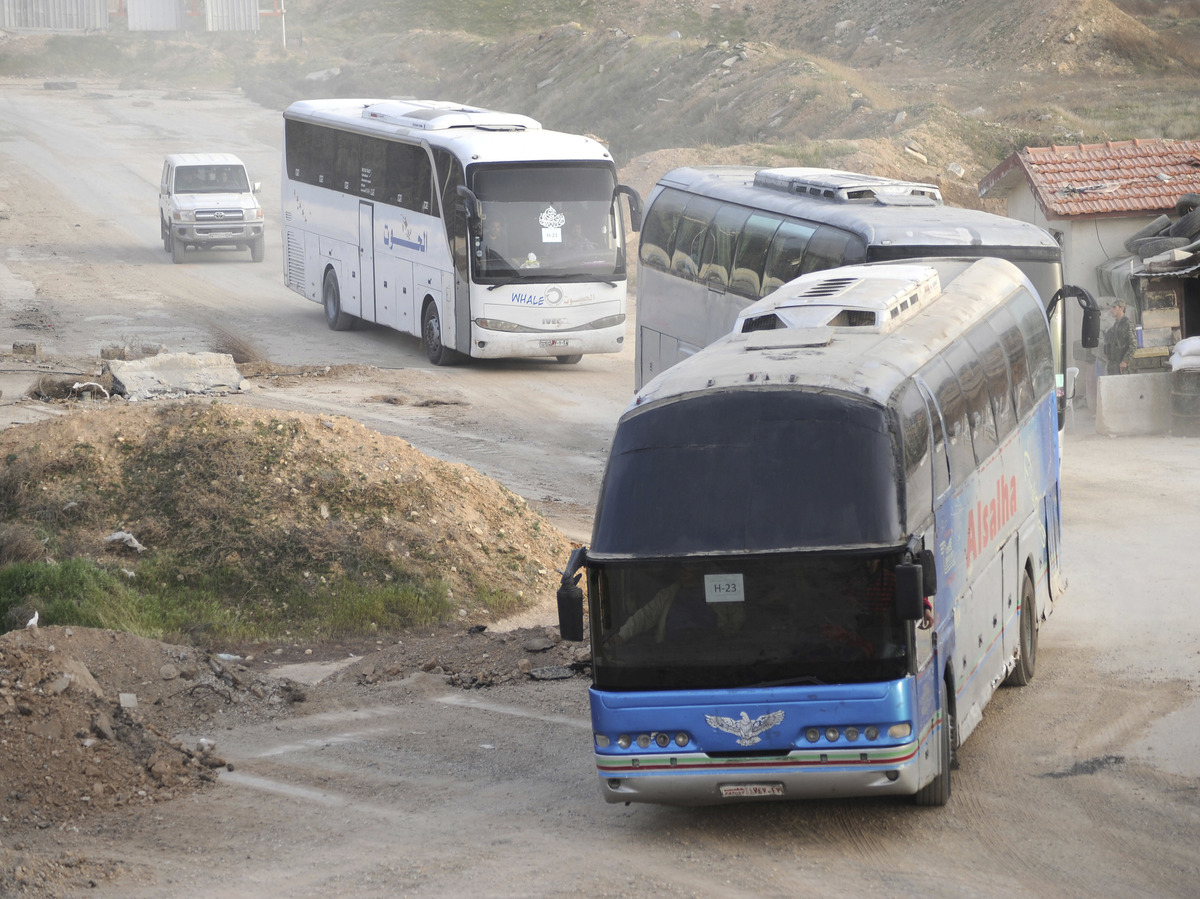 The evacuation by bus of rebel fighters and their families in eastern Ghouta, Syria. Buses from the Syrian Ministry of Transport and Syrian Red Crescent vehicles were seen on the outskirts of Harasta on Thursday, after crossing the last Syrian Army checkpoint before the town.

Backed into a corner, rebel groups in the enclave are beginning to admit defeat. This week, Ahrar al-Sham became the first main faction of fighters to surrender to the Syrian army, in a deal that bused them and their families into exile in the northern province of Idlib.

Then Thursday night another larger group looked like it was willing to follow suit: Faylaq al-Rahman rebels announced a tentative pause in fighting and the start of negotiations with the regime and its allies. So far though, the ceasefire has failed, airstrikes have continued unabated and no deal has been reached.

In taking back eastern Ghouta, the regime would bring an end to the last main opposition-held enclave in Damascus. But as the prospect of a rebel surrender grows more likely, many questions over the future of the more than 350,000 residents that aid groups estimate are in eastern Ghouta remain. Whether civilians will be allowed to stay in their homes after the government retakes the territory, and what happens to rebel fighters, is the subject of intense negotiations.

This wrangling is largely behind the scenes. But so far the fate of eastern Ghouta looks similar to that which befell other defeated rebel enclaves in Damascus and its suburbs: in Moademiyeh, Yarmouk and Daraya. 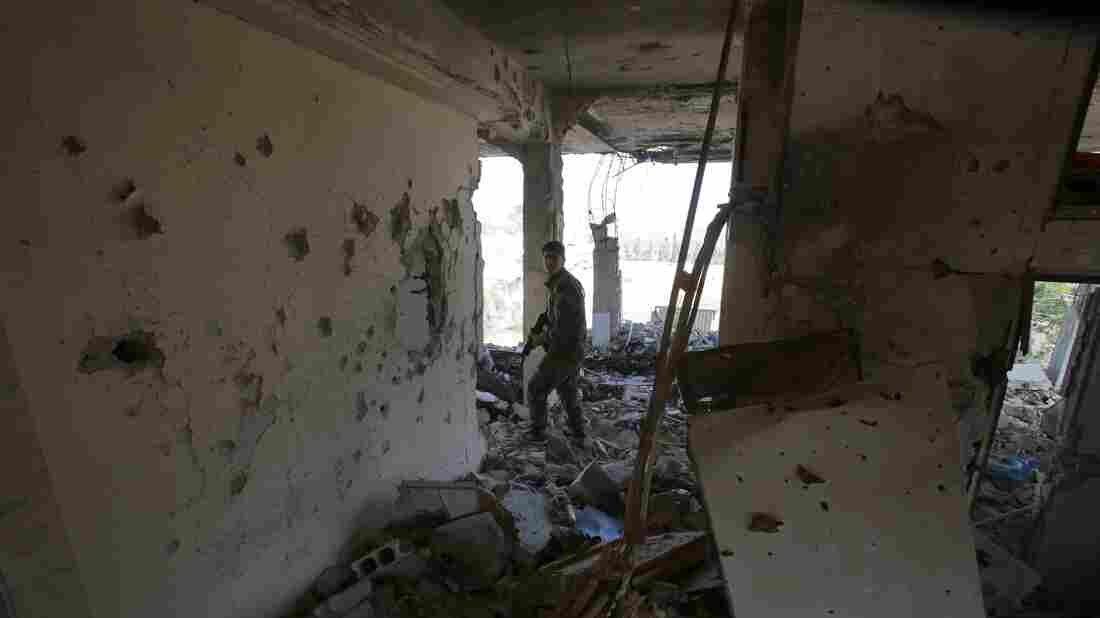 A member of the Syrian government forces patrols the city of Daraya, southwest of the capital Damascus, in late February 2016. Youssef Karwashan/AFP/Getty Images hide caption 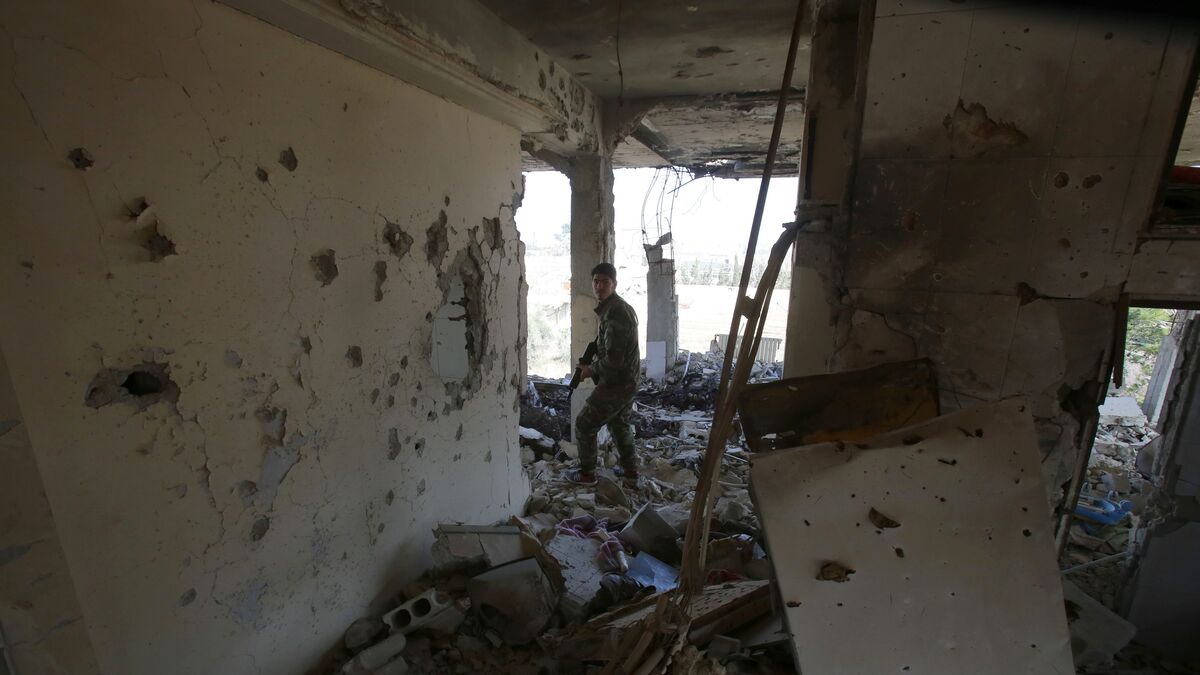 A member of the Syrian government forces patrols the city of Daraya, southwest of the capital Damascus, in late February 2016.

Today those areas stand largely emptied of their original inhabitants, bullet ridden and pockmarked by tank fire — ghostly monuments to violence of the towns' recent past.

"Daraya was the first town in Damascus to be placed under such a tight siege," says Saeed Naqrash, a Syrian army defector who led a rebel group in Daraya, southwest of the capital.

His account of what happened there leading up to the rebels' surrender in the summer of 2016 offers a window into the military strategy of the Syrian regime and its allies.

Daraya was placed under tight siege in November 2012. Just like the Ghouta offensive, food stocks dwindled. Naqrash describes how civilians picked grass from sidewalk cracks to pad out their thin watery. He's haunted by memories of children wasting away from starvation.

While it kept Daraya choked off from the outside world, Naqrash says, the Syrian government regularly sent emissaries offering deals requiring the rebels to surrender. Once, he says, they even dispatched Syria's grand mufti, the country's officially appointed Sunni Muslim religious authority, to talk to them.

"We refused the deal," Naqrash says. Instead, the armed men held out for a solution to be found through United Nations-led negotiations in Geneva. They hoped that by holding down Daraya and threatening the regime from there with their weapons, they would be able to force a deal that would include Assad stepping down. But those talks, as well as an attempt at a truce, failed. As per what's happened in eastern Ghouta, with its failed ceasefire, the bombardment of the town by the Syrian military and allied militias only intensified. 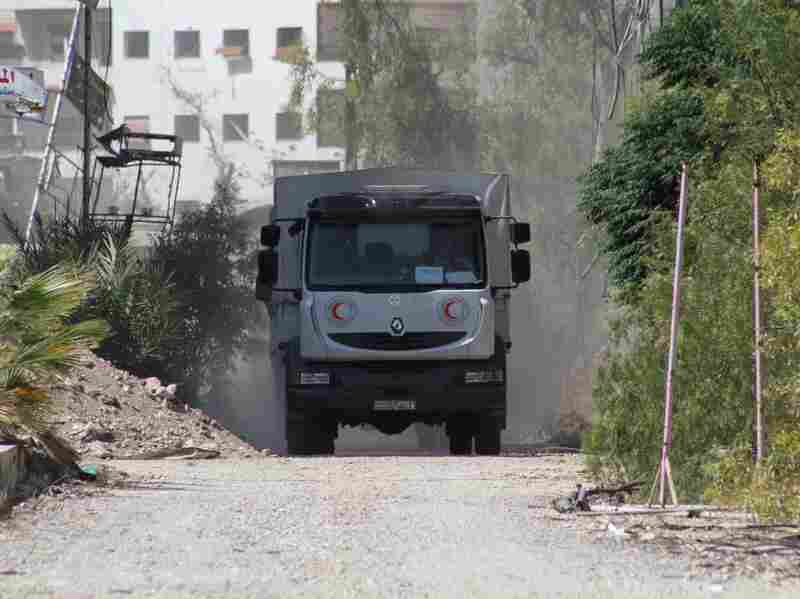 A truck of the Syrian Red Crescent drives as an aid convoy entered Daraya on June 1, 2016. AFP/AFP/Getty Images hide caption 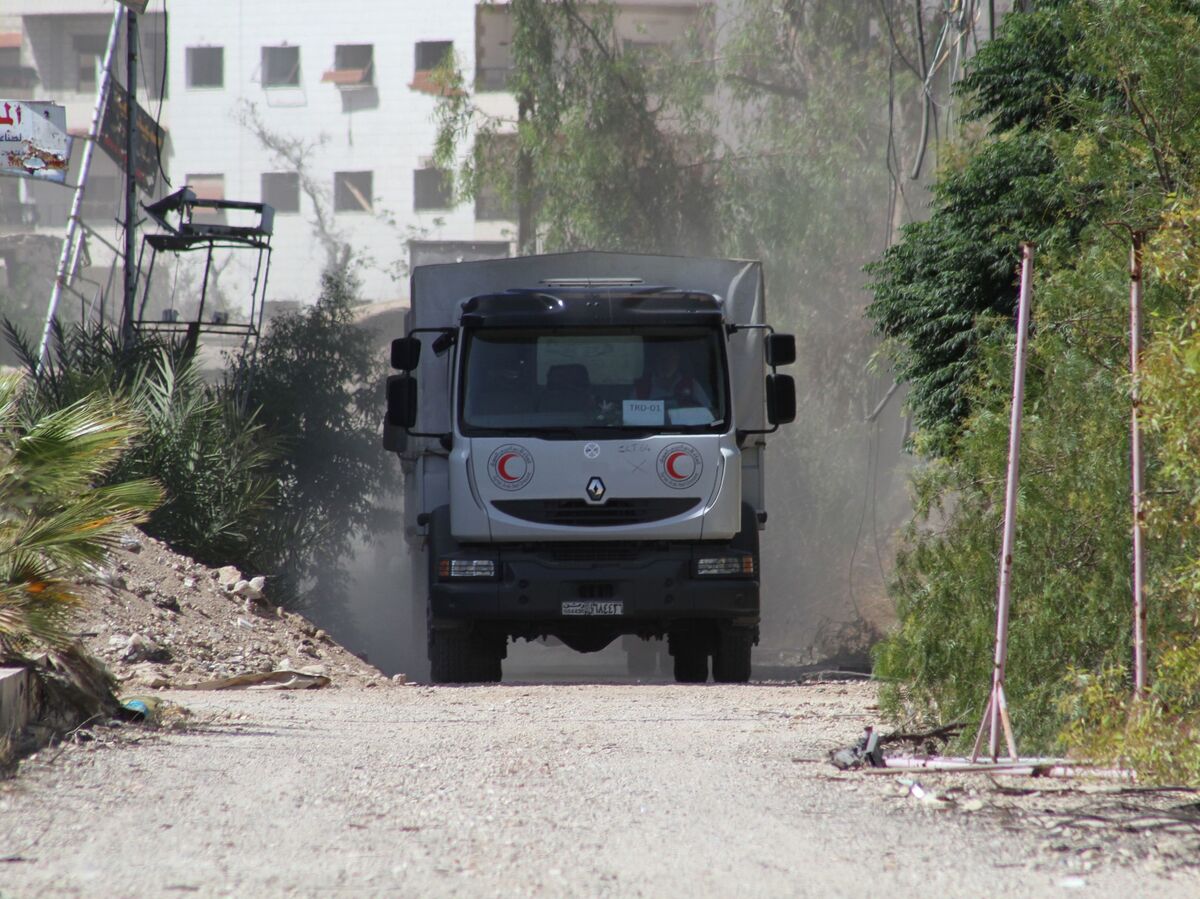 A truck of the Syrian Red Crescent drives as an aid convoy entered Daraya on June 1, 2016.

In June 2016, pressure from a U.N. Security Council resolution did lead to a single aid convoy being allowed into Daraya. When the convoy arrived though, Naqrash says, it felt like a cruel joke. Medical equipment had been confiscated at the government checkpoints. "After all that and a four-year siege, we received contraceptives and mosquito nets," he says with a bitter laugh.

Medication has also been confiscated at government checkpoints from aid convoys going inside eastern Ghouta.

The siege on Daraya became harder and harder to resist. The Syrian government and its ally Russia escalated their air campaign, blitzing the area with such force that civilians lived in their basements in search of protection from the bombs. "We had daily raids and shelling, just like what's happening in Ghouta right now," says Naqrash. "On the ground, we were retreating."

By July 2016, he says, residents couldn't take it anymore. They begged the rebels — most of the fighters from the neighborhood themselves — to find some way to stop the bombing.

"We knew that surrender now was the only option, but it was about how we surrendered," he says.

The U.N. process failed them. So Daraya's rebels turned to Russia, Assad's ally, and agreed to let the Kremlin lead a negotiation between them and the Syrian government. But at each attempt, Naqrash says, promises failed to materialize into action.

As seems to have happened in eastern Ghouta, Russia would promise safe access for aid convoys but then fail to secure a path on the ground. "We soon realized they were lying," he says. "Or maybe they weren't able to do anything."

It was only by turning to Hezbollah, the Iranian-funded militia that backs Assad, that they managed to push the Syrian government into serious talks.

Naqrash's account of what happens next is a rare insight into the dynamics between these two allies. While Assad and Hezbollah are on the same side in the wider war, they compete for control over individual battlefields, says Naqrash.

In Daraya, he says, both Hezbollah and the regime wanted to be the ones to claim success at securing the rebels' surrender. Naqrash says the Daraya fighters used this to get the best deal they could.

They played one side off the other, getting better terms with each bargaining round. In the end, the Syrian government agreed to allow the rebels and their families to be exiled in Idlib, a rebel-held province. They were also allowed to take their lighter weapons with them.

In eastern Ghouta, the regime and its allies are pressuring for a solution that also requires rebels and their families to evacuate.

"They keep setting ultimatums, telling us again and again that to stop the bombing we have to evacuate," says Ahmed Taha, a representative of the pro-opposition civil council for rural Damascus.

The regime's strategy is starting to bear fruit. Ahrar al-Sham's surrender sent fighters walking out of the enclave, their arms high in the air. They and their families boarded buses and were driven to Idlib. Russian media estimated that some 1,500 fighters and 6,000 family members and supporters will leave under the agreement.

Taha is from Douma, a main town in eastern Ghouta. He saw five close family members die during the siege. He is now in Turkey and spends his days appealing to diplomats from U.N. Security Council countries for a better solution than a surrender that sends rebels to Idlib.

The government's forced mass population displacement to Idlib is not humane, Taha says. Thousands of people, most of them civilians, get ripped from their homes with no prospect of return.

Nor is Idlib a safe place of refuge. It hosts more than a million displaced people, many of them the families of rebel fighters who surrendered in past sieges. It has also become the focus of an aerial bombing campaign by the regime and its allies, and much of the rest of the area is being ravaged by a battle between rebel factions.

"By sending people to Idlib you're sending them from fire to fire," says Taha.