Accessibility links
CIA Recruiting: The Rare Topic The Spy Agency Likes To Talk About : Parallels The CIA is notoriously publicity shy. But when it comes to recruiting, you can find the agency's outreach all over the place, from social media to college job fairs, with an emphasis on diversity. 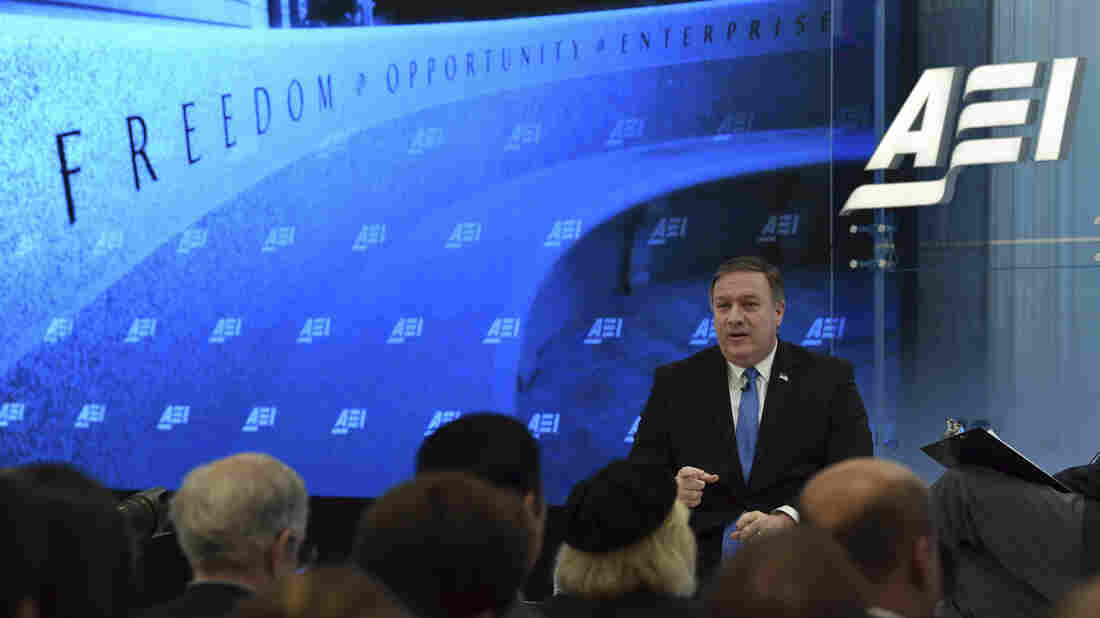 CIA Director Mike Pompeo speaks in Washington in January. The spy agency has become more open and active in recruiting staff, with the aim of greater diversity. Even Pompeo encourages job applications in his public remarks. Susan Walsh/AP hide caption 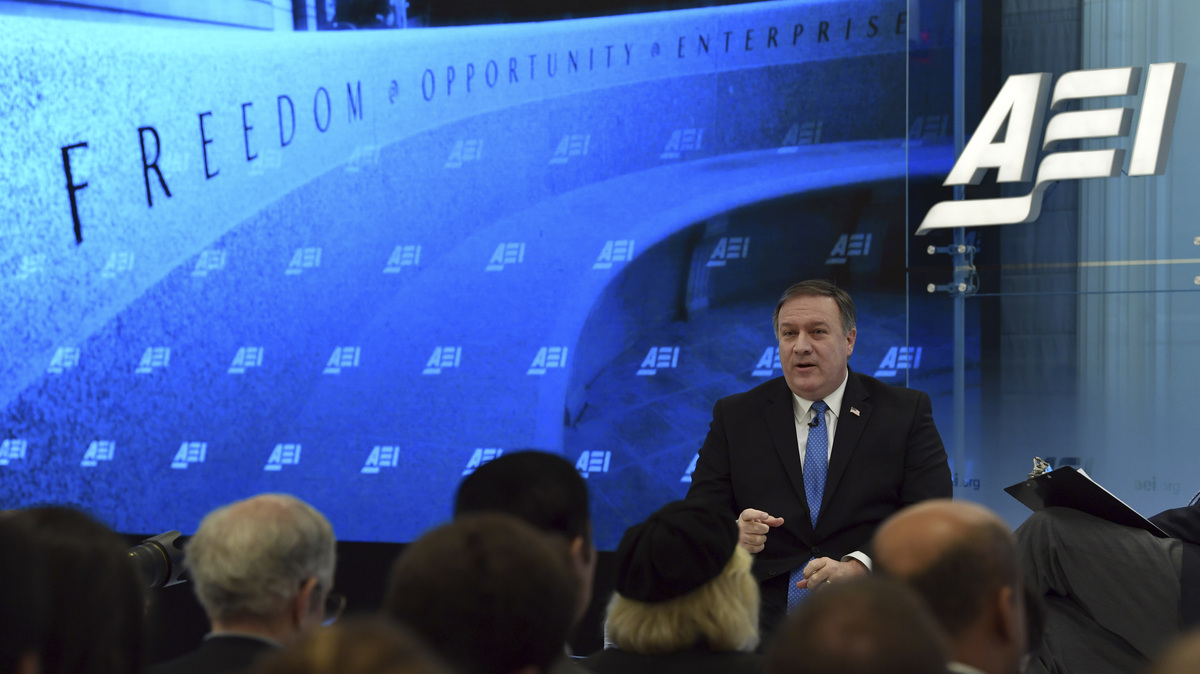 CIA Director Mike Pompeo speaks in Washington in January. The spy agency has become more open and active in recruiting staff, with the aim of greater diversity. Even Pompeo encourages job applications in his public remarks.

Want to work at the CIA? Here's some guidance from Sheronda. We can't use her last name. But we can tell you she's the agency's chief of talent acquisition, or head of recruiting.

So, at what age can you start?

"We are looking for high school students to come in certain occupations," Sheronda said.

That's right. Some kids who have just graduated from high school can start working at the CIA. There's an even more extensive college internship program.

What about social media accounts?

What if you dabbled with drugs?

"It's actually asked up front on the application. Have you done drugs within the last year? That is a standard intelligence community question," she added.

It used to be within the past five years. But times have changed. Now, you're probably O.K. if you haven't used drugs in the past 12 months.

The CIA rarely speaks publicly. But when it comes to recruiting, the agency can't seem to stop talking. These efforts are more visible than ever, with pitches on social media, regular appearances at college job fairs, and even the occasional plug by outgoing CIA Director Mike Pompeo.

"CIA-dot-gov is where you go to apply. We are always looking for talented young men and women," Pompeo said at a conference outside Los Angeles in December.

A view from the inside

The CIA invited NPR to its headquarters in Langley, Va. — and into a recording studio that's complete with a green screen — to speak about the evolution of its recruiting with Sharanda and two other women, Mary and Kim. Once again, it's first names only.

Mary is an undercover officer and it's extremely rare for someone with her job to speak on the record.

She was born in South Asia and is fluent in several "hard languages," as she puts it. She's spent much of her 20-year career in hot spots she's not going to share with us.

"I was in training when [the Sept. 11, 2001 attacks] happened and it certainly was a wakeup call to my class that we weren't going to be hobnobbing in Paris necessarily," Mary said. "But maybe going to some of the not so nice places."

Speak Arabic?
US citizen with a college degree?
Interested in national security?
Your skills are needed here.https://t.co/acebqeWxty pic.twitter.com/i34hZeQ0pF

She was right about that.

"I've been overseas for a majority of my career. I've only come back for a few months to process and then to go off to the next assignment," she said.

The job is demanding, requiring all kinds of sacrifices and limitations on her personal life.

"In my case, I am undercover," Mary added. "And what [the CIA] encourages is that you limit the number of people that you tell, your very trusted inner circle, family, maybe a friend or two. But I chose not to tell most of my family, mostly because they worry."

In contrast to Mary, Kim has spent her 13-year career at CIA headquarters as an analyst, much of it focused on Africa. She's able to be relatively open about her job. She's naturally outgoing and speaks at public events like college job fairs.

"I've always wanted to work at CIA. This is what I've wanted to do since I was 12," Kim said. "I saw a movie and I wanted to be like that guy in the movie."

"Clear and Present Danger. I wanted to be Jack Ryan," she said — the lead played by Harrison Ford.

Growing up in a small, Midwestern town, she had no idea how she'd make her way to the CIA, or if the agency would be interested in her as an African-American woman.

"When I decided to go to the CIA career fair, I had a professor tell me that I could not have dreadlocks and that I was going to have to change who I was," she recalled.

For the record, Kim still has dreadlocks. And they haven't held her back.

She's now chief of staff for the Directorate of Analysis. That means she supervises teams that put together intelligence sent in by CIA officers around the world.

FIRST YEAR COLLEGE STUDENTS:
You’ve been waiting…Now is the time!

Click here to apply to the Directorate of Operations 2019/2020 clandestine #internship program.https://t.co/NajumkS9fX pic.twitter.com/5u1cNVUbIN

Applications to work at the CIA shot up after the al-Qaida attacks in 2001. Former CIA Director Michael Hayden said they reached 160,000 in his final full year at the agency, 2008. They have come down a bit since then, according to Sharanda, though she declined to give a figure.

Still, the agency has become more visible, and more widely welcomed at places like universities.

For journalist and author Daniel Golden, this was a sea change from his student days in the 1970s.

"Back then, it was commonplace for students to protest the presence of a CIA recruiter on campus," he said. These days, "recruiters are pretty universally accepted and students sign up in droves for these sessions."

Golden is the author of Spy Schools: How The CIA, FBI, and Foreign Intelligence Secretly Exploit America's Universities. The book looks at how the CIA openly recruits American students — and quietly contacts foreign professors and students at U.S. schools — with the aim of getting them to work for the agency when they head back home.

The old CIA recruiting cliche is a college professor tapping a promising student on the shoulder — a white, male student — and discreetly guiding him to the agency.

That still happens. But now there are YouTube videos, like this one below, which features Frank, a staff operations officer, who says: "I plan and guide challenging foreign intelligence collection operations, counter-intelligence activities, and covert action programs."

This CIA outreach has changed in style and substance.

Up to 20 percent of new hires are now in mid-career, with specialized skills:
ex-military types for the paramilitary force; cyber experts who can spot digital threats, and instructors for in-demand languages, including Chinese, Korean and Farsi.

The agency is clearly presenting itself as a modern, diverse place to work. This comes as Gina Haspel, a 33-year CIA veteran just became the first woman nominated to hold the top job.

However, a 2015 study, as well as other internal reviews, found the agency is falling short of its own targets for hiring and promoting women and minorities, particularly in the senior ranks.

Mary, the undercover officer, says conditions have been changing during her two decades at the agency.

"I was one of very few people that wasn't a white male walking around the halls here, pre 9/11," she said. "But now, there are a lot of women. It's very diverse."

Given the nature of the work, the CIA can become a surrogate family. Or in Mary's case, actual family.

"I got married, actually, to a colleague and the agency is very good about encouraging tandem couples," said Mary.

And that certainly doesn't sound like your father's CIA.