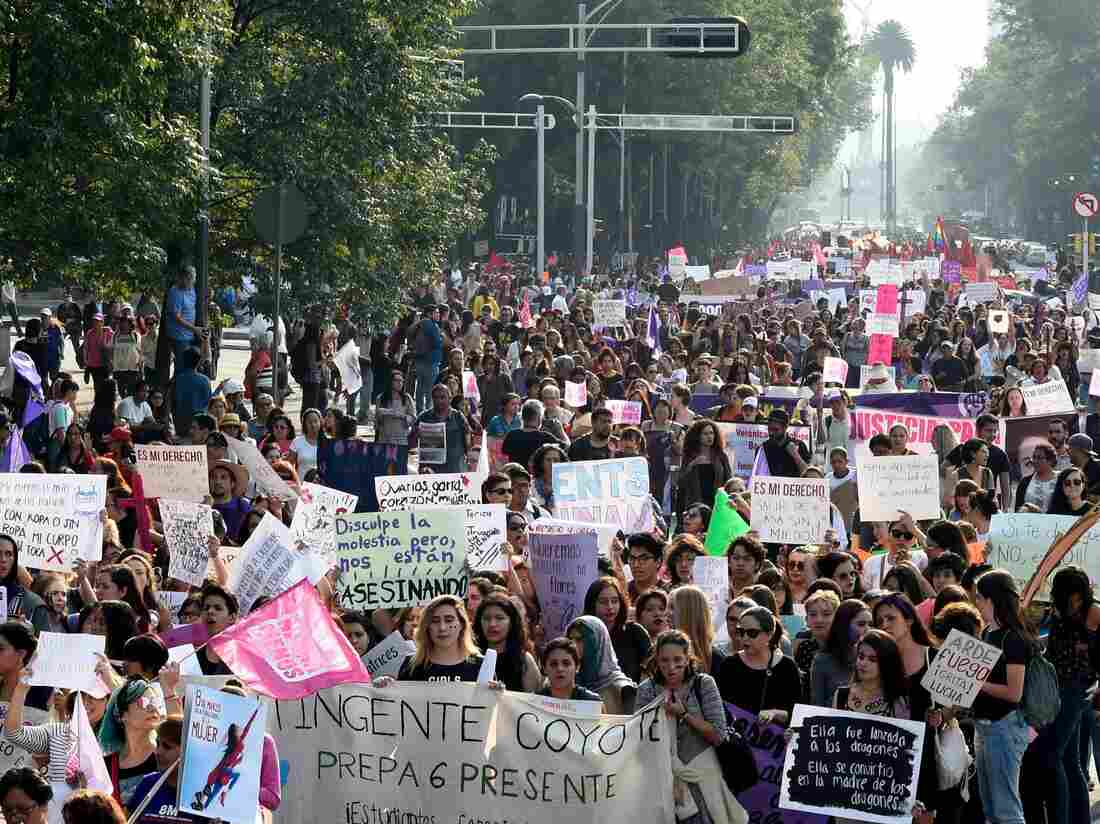 People take part in the commemoration of International Women's Day in Mexico City on March 8. The national public security department's statistics show that more than 41 percent of women over the age of 15 have experienced some sort of sexual violence. Alfredo Estrella/AFP/Getty Images hide caption 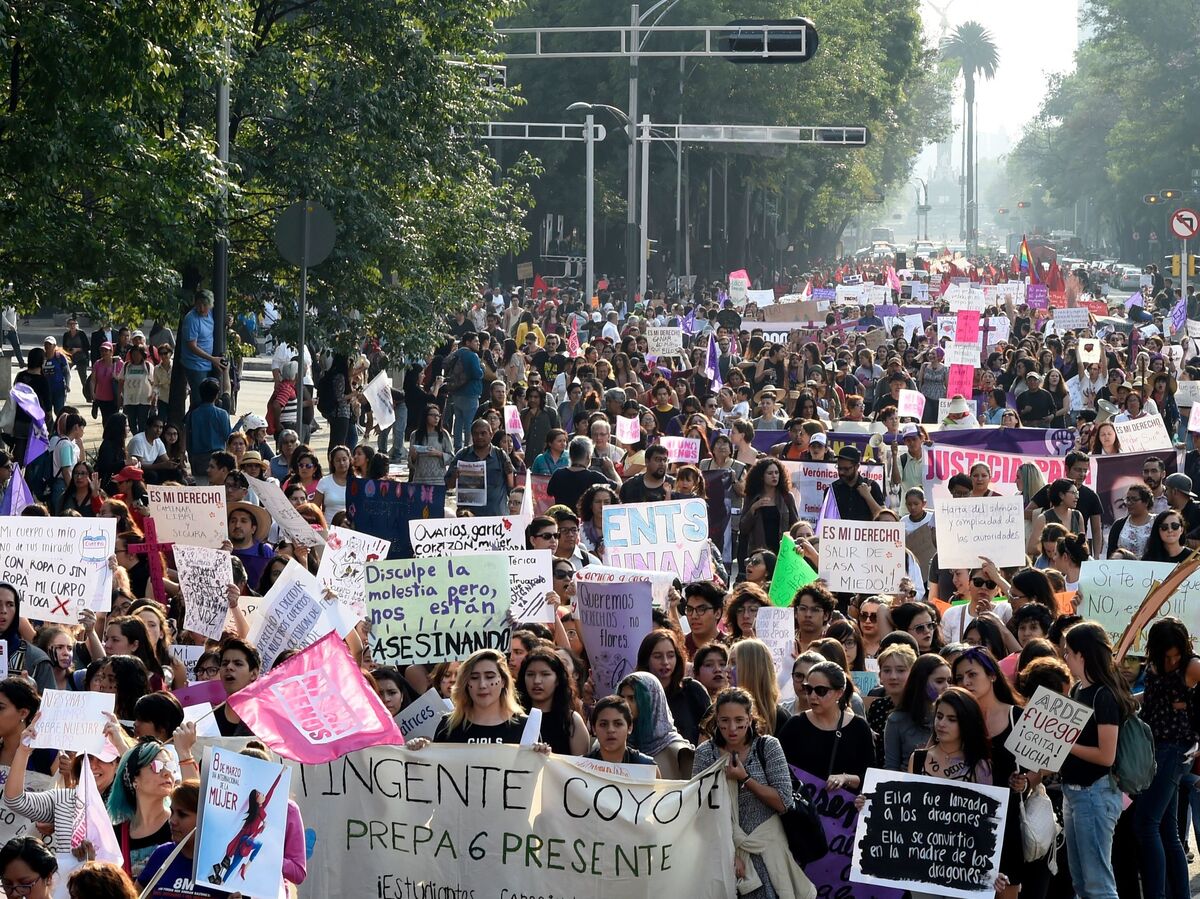 People take part in the commemoration of International Women's Day in Mexico City on March 8. The national public security department's statistics show that more than 41 percent of women over the age of 15 have experienced some sort of sexual violence.

At least, that was the case until a few weeks ago, when it appeared that the #MeToo Movement — Mexico edition — had arrived.

Women working in Mexico's entertainment industry began coming forward with accusations of sexual harassment, inappropriate behavior and rape. However, within days, the women became the targets of heavy criticism. For now, #MeToo Mexico appears to be experiencing more backlash than movement.

Actresses and other public figures speak out

"He kissed me and touched me in a way that I didn't want to be touched," one actress, Karla Souza, told Mexican reporter Carmen Aristegui on CNN en Español, the network's Spanish-language network. Souza was describing an experience she said she had with a director, whom she did not name, early in her career.

China Is Attempting To Muzzle #MeToo

Souza is well known in Mexico for a string of hit movies and has broken out in the U.S. as the character Laurel Castillo on the ABC show How to Get Away with Murder.

She told CNN en Español that uncomfortable advances by her alleged attacker turned into violence.

"In one of the instances, he violently assaulted me and yes, he raped me," she said, wiping tears from her eyes.

I am proud to stand in solidarity with my sisters in Mexico and women around the world whose voices are finally being heard and saying #TIMESUP.

The next day, Mexican media group Televisa issued a statement saying it conducted a preliminary investigation "in the face of public accusations about the sexual abuse" of Souza and was severing ties with director Gustavo Loza.

Meanwhile, more actresses came forward, as did a comedian and an Olympic diver, alleging harassment and other inappropriate behavior by men.

Sexual harassment and violence are nothing new and are widespread in Mexico. In a recent Brain-Gallup poll, nearly half of Mexican women said they have been victims of sexual harassment.

The national public security department's statistics show that more than 41 percent of women over the age of 15 have experienced some sort of sexual violence.

Mexican playwright Sabina Berman, 62, says sexual harassment in Mexico's entertainment industry has a long history. She says when she picked up her first paycheck from the country's writers guild, José María Fernández Unsáin, then the guild president, molested her. She was 19.

"He appeared behind me and he put his hands inside my pants ... and from there, harassment happened for 10 years," Berman tells NPR.

She says every time she went to pick up her check, Fernández would call her into her office and molest her. Finally, it stopped: "Because I became successful enough to have an assistant, and then I sent him to go get the checks," she says with a laugh.

A spokesman for the guild told NPR they would not comment on Berman's accusations. Fernández died in 1997. 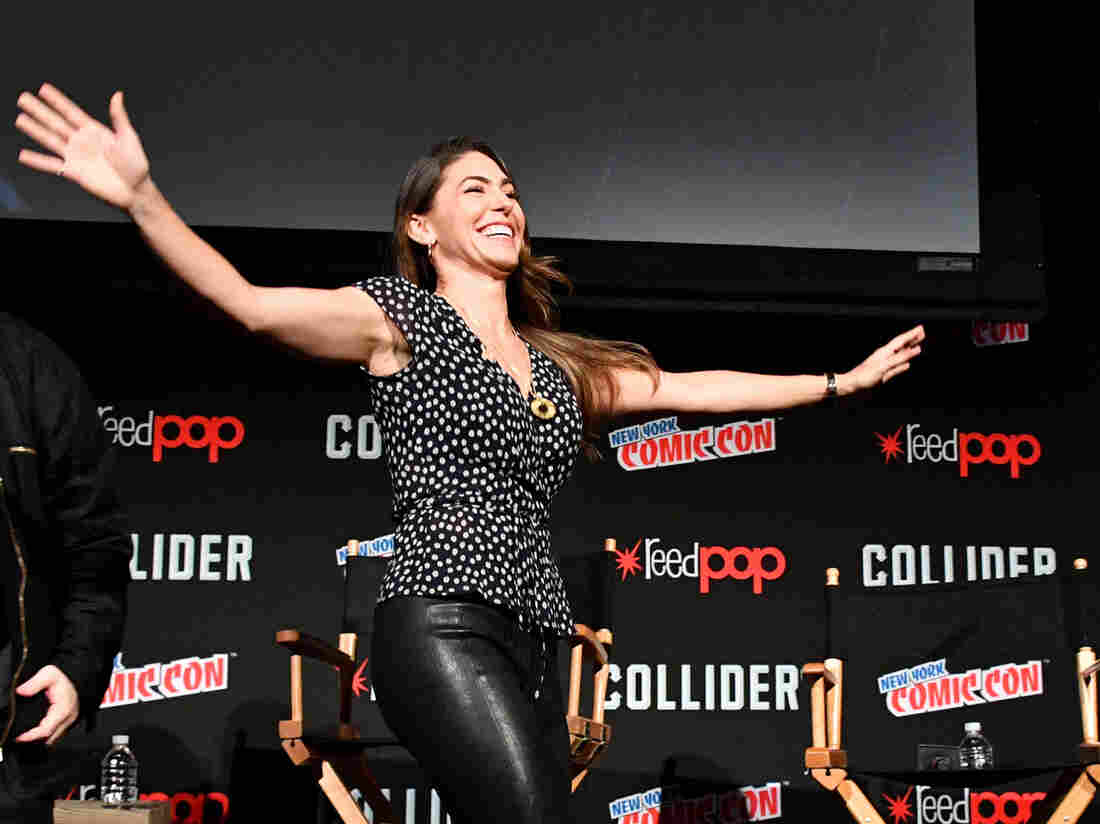 Actress Natalia Cordova-Buckley, shown here during New York Comic Con last October, has defended her fellow actresses: "You speak out and they assassinate you in the media," she said. Dia Dipasupil/Getty Images hide caption 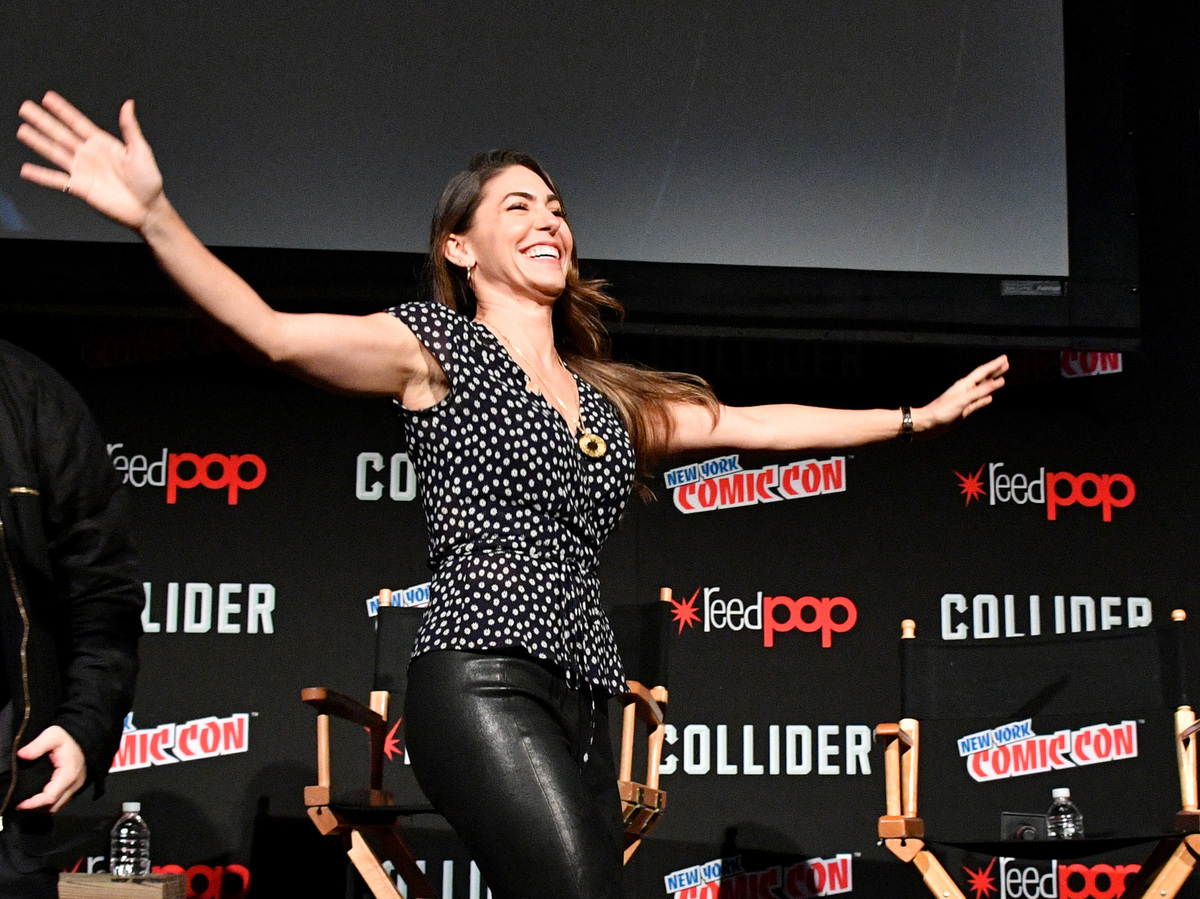 Actress Natalia Cordova-Buckley, shown here during New York Comic Con last October, has defended her fellow actresses: "You speak out and they assassinate you in the media," she said.

Last month, in an interview with Aristegui on the journalist's online show, Berman brought up an incident involving underage girls that she said occurred during the filming of the movie Gloria in 2014. Berman accused the casting director of misconduct. His company sent out a scathing denial. Within hours, Berman retracted her accusation, citing a faulty memory, and issued an apology.

"You speak out and they assassinate you in the media"

Berman's gaffe was severely criticized, fueling a backlash already underway since Souza and the other actresses went public with their accusations.

"Sorry, but it is irresponsible of these women to go on TV and refuse to name names and to make false accusations," TV Azteca host and actor Horacio Villalobos said on his show, echoing some of the skepticism permeating social media.

Others questioned why the women didn't report alleged crimes at the time they occurred.

A new hashtag, #YoNoDenuncioPorque, meaning "I don't report because," quickly emerged and began trending on Twitter as people posted reasons why they wouldn't report harassment or abuse to the police. Fear of losing work and being related to an aggressor were among the reasons cited.

"You speak out and they assassinate you in the media," she said.

Noted security expert Alejandro Hope sided with the women in his weekly column in a Mexican newspaper. Hope wrote about police routinely blaming victims of sex crimes and how impunity trumps justice in Mexico. These factors greatly discourage reports, he wrote.

"We have to transcend this backlash"

With no new revelations since #MeToo Mexico made its debut last month, it appears the movement has lost steam.

But actress Cordova-Buckley warns not to write it off too quickly. "The women just needed a break and are regrouping," she wrote in a text message to NPR.

A letter to end #Misogyny.

In a Twitter post from October that has gained new attention in recent weeks, she wrote about machismo in Mexican society and said while it had haunted her for her entire life, it had met its "worst enemy" and she would continue speaking out.

"We have to transcend this backlash, this immediate machista [male chauvinist] backlash," says Berman, the playwright.

And not just for the sake of actresses, she adds — but for the millions of Mexican women who don't have access to an open mic.

In the audio version of this report, we mistakenly say that Mexican playwright Sabina Berman reported her claims of sexual assault to interviewer Carmen Aristegui on CNN en Español. In fact, Berman's comments were made to her on the interviewer's news outlet Aristegui Noticias.