Accessibility links
Yazidis Remain In Fear On Iraq's Mount Sinjar After Attempted Genocide : Parallels When ISIS invaded their villages in northern Iraq in 2014, tens of thousands of Yazidis fled for safety. Now their community leader says over 4,000 remain up on a mountain. 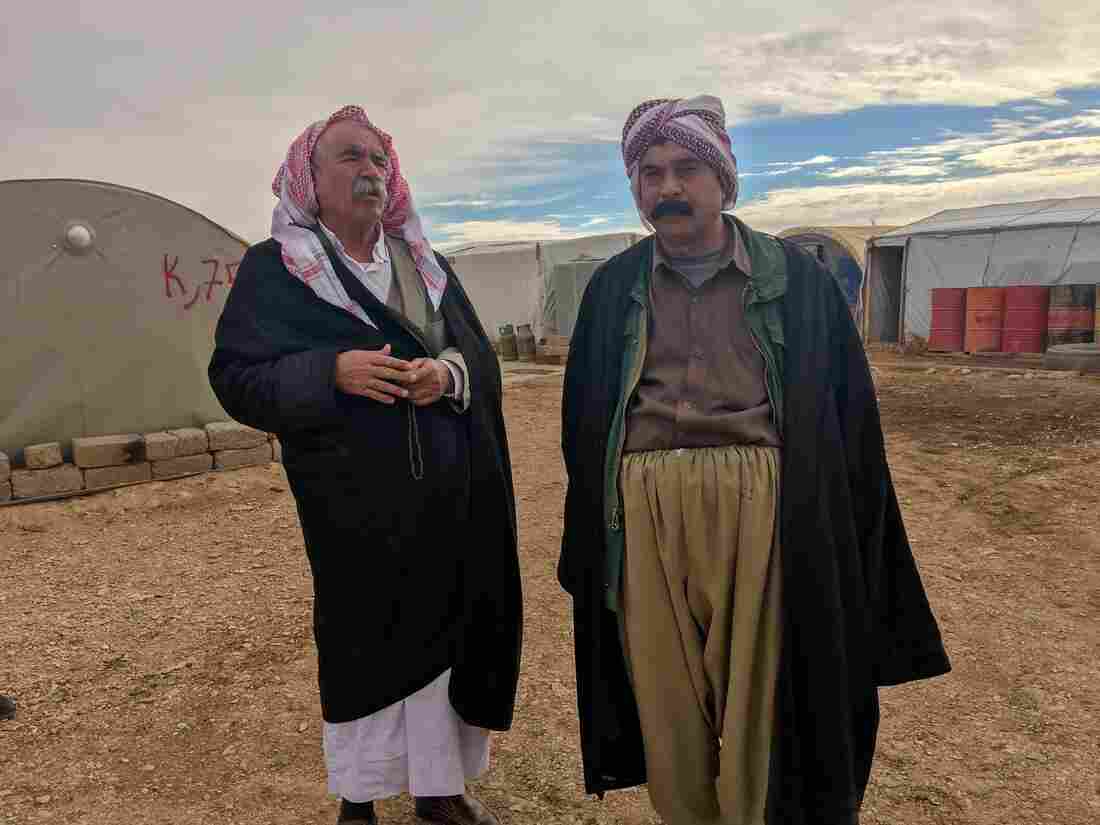 Saeed Ahmed Khalaf, left, and his family live in a tent on Mount Sinjar. He believes the U.S. would either help protect the Yazidis in Sinjar or help the group emigrate to a safe place. Jane Arraf/NPR hide caption 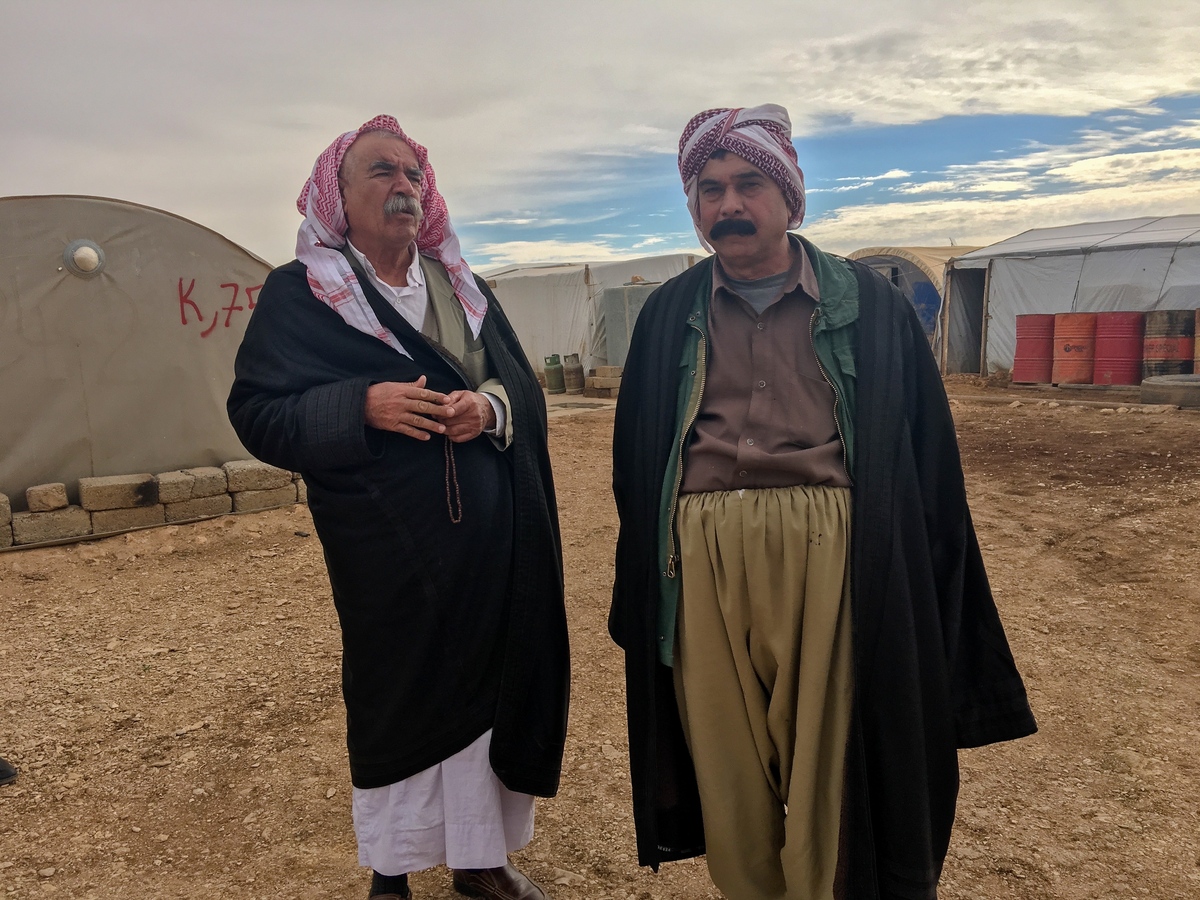 Saeed Ahmed Khalaf, left, and his family live in a tent on Mount Sinjar. He believes the U.S. would either help protect the Yazidis in Sinjar or help the group emigrate to a safe place.

Navine, 15, could pass for a typical teenager. Her delicate face is framed by dark brown hair pulled back with carefully curled tendrils in front. She wears sweatpants and a slouchy striped sweater.

Then she pulls up the sleeve to reveal a tattoo — a crude letter N. Her mother had Navine and her brother tattooed with ashes and a nail when they were being held by ISIS.

"We all made them when we were first kidnapped," says her mother Halo, sitting near a kerosene heater in their tent on Iraq's Mount Sinjar. That way, if they were separated, mothers believed they might be able to find their children later.

In 2014, tens of thousands of members of the Yazidi religious minority, facing genocide from ISIS, escaped to the mountain from the town of Sinjar and surrounding villages in northern Iraq.

Targeted By ISIS, These Yazidis Refused To Leave Their Beloved Mountain

The United States said it entered the war against ISIS partly to protect Yazidis trapped on the mountain with no food and water.

Four years later, several thousand of them remain there. Destitute and living in tents, they are still too afraid to come down.

Halo, who asked that only her first name be used, was captured by ISIS along with her children and was eventually taken to the militant group's then stronghold of Raqqa in Syria. Her husband, two elder daughters and another son are still missing.

Relatives say they raised $26,000 to fund an underground operation to bring back Halo's surviving children.

Navine was 11 when she was taken. For more than two years, while she was held with her mother, younger brother and a baby sister in Raqqa, she pretended to be paralyzed so she wouldn't be taken away as a sex slave.

"It was so difficult," she says, sitting on a foam mattress. "Sometimes they were pulling my hair and saying, 'You have to walk. You have to talk.' But I wouldn't answer them. Even when the airstrikes were hitting very close to us, and everyone was running away, I just stayed where I was lying down."

After Halo and her children's release from ISIS captivity, they settled in a tent near relatives on Mount Sinjar.

Yazidis are an ancient and secretive religious minority whose faith has long left them as targets for persecution. And for centuries, the 4,800-foot-high Mount Sinjar has served as a refuge for Yazidis fleeing possible genocide.

Down at the base of the mountain, entire neighborhoods in the town of Sinjar were destroyed in the U.S.-backed fight against ISIS. Halo's house was one of those left too damaged to live in.

Yazidis say they've been forgotten in this remote corner of Iraq. Help from aid organizations arrives only sporadically. There is no running water and no electricity. The nearest schools are too far for many children to walk.

Disputes between the Iraqi government and authorities in Iraq's semi-autonomous Kurdistan region in Sinjar have also held up aid.

"Sometimes an organization comes and gives each family a box of food. But it doesn't last long — just a few days," says Halo, layered in sweaters against below-freezing winter temperatures, a traditional white scarf covering her hair.

The mountain is dotted with groups of tents — some made from the same pieces of plastic dropped by U.S.-organized airlifts four years ago. The community leader of Sinjar — the mukhtar — says more than 4,000 people are living on the mountain. 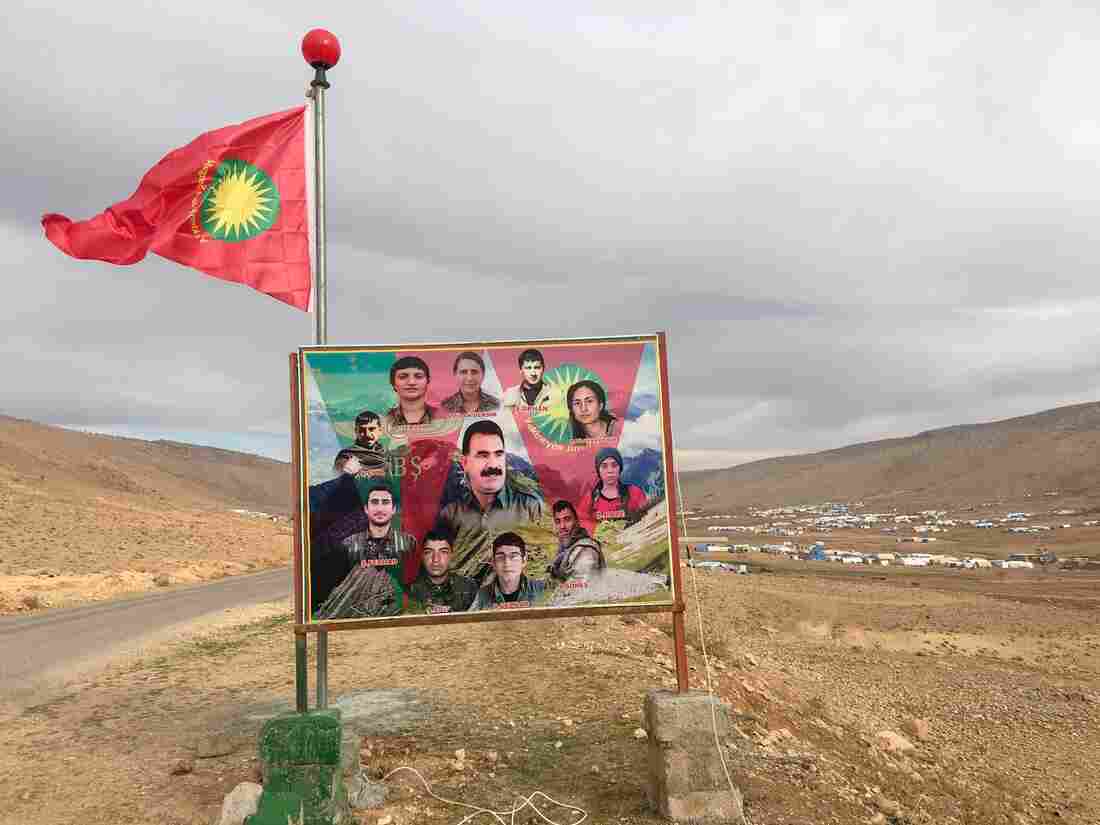 A flag of the Yazidis' Sinjar Resistance Units and photos of fighters killed battling ISIS on the side of the road in Sinjar, in northern Iraq. The pictures show slain fighters from both the resistance units and a Turkish Kurdish guerrilla group that backs them. Jane Arraf/NPR hide caption 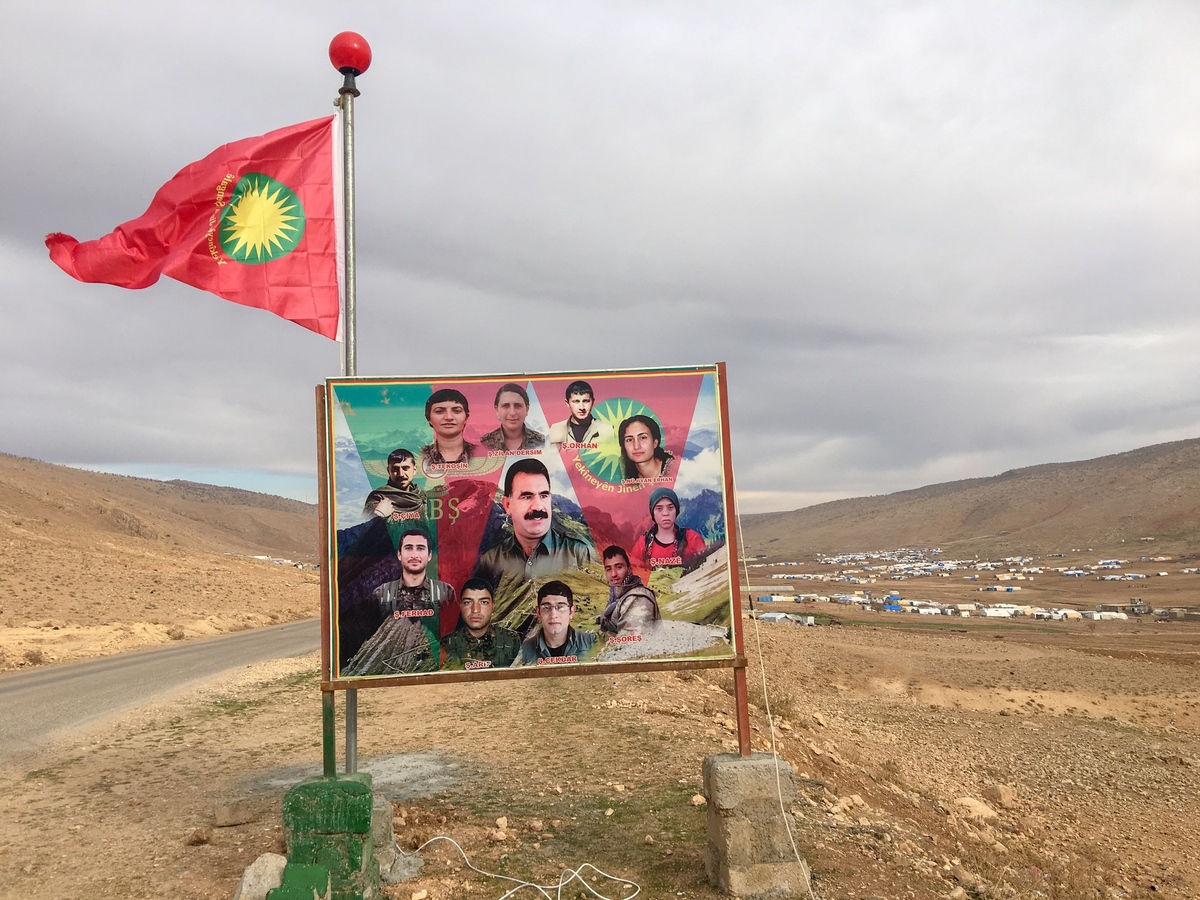 A flag of the Yazidis' Sinjar Resistance Units and photos of fighters killed battling ISIS on the side of the road in Sinjar, in northern Iraq. The pictures show slain fighters from both the resistance units and a Turkish Kurdish guerrilla group that backs them.

Almost every family here has had relatives captured by ISIS. Of the more than 6,000 Yazidis kidnapped, almost half are still missing. Many are presumed dead.

"Our villages are surrounded by Arabs," says Saeed Ahmed Khalaf, 64, who has lived on the mountain since 2014. "They were ISIS, but now they've shaved their beards and they're still there. How can we go back?"

Before the U.S. invasion of Iraq in 2003, Yazidis in Sinjar had strong ties with neighboring Arab tribes. Some Yazidi and Arab children were considered blood brothers — their families obligated to protect each other.

Those ties frayed when al-Qaida took root after 2003 and Yazidis became a target. Some Sunni Arab tribes blamed the Yazidis for welcoming the presence of U.S. forces.

When the ISIS rampage in Sinjar began, many of the fighters who came to kill and kidnap Yazidis were people they knew from nearby Arab villages.

"We were neighbors — we were eating, drinking together," says Burgess Qassim, who farms and raises sheep. "Almost all the Arabs in this area either joined ISIS or supported ISIS," says Qassim, drinking tea in the mukhtar's home.

The attacks have left them permanently afraid of the surrounding villages.

"Today my shepherd just heard the bells of an Arab's flock and he pulled the sheep back," says Qassim, 41. "We always say you should keep a distance of at least 5 kilometers [3 miles] from the Arabs."

Qassim says two of his cousins were recently shot dead by Arab villagers in an argument over grazing rights. Militia fighters connected to Iraqi security forces said they couldn't arrest the men. 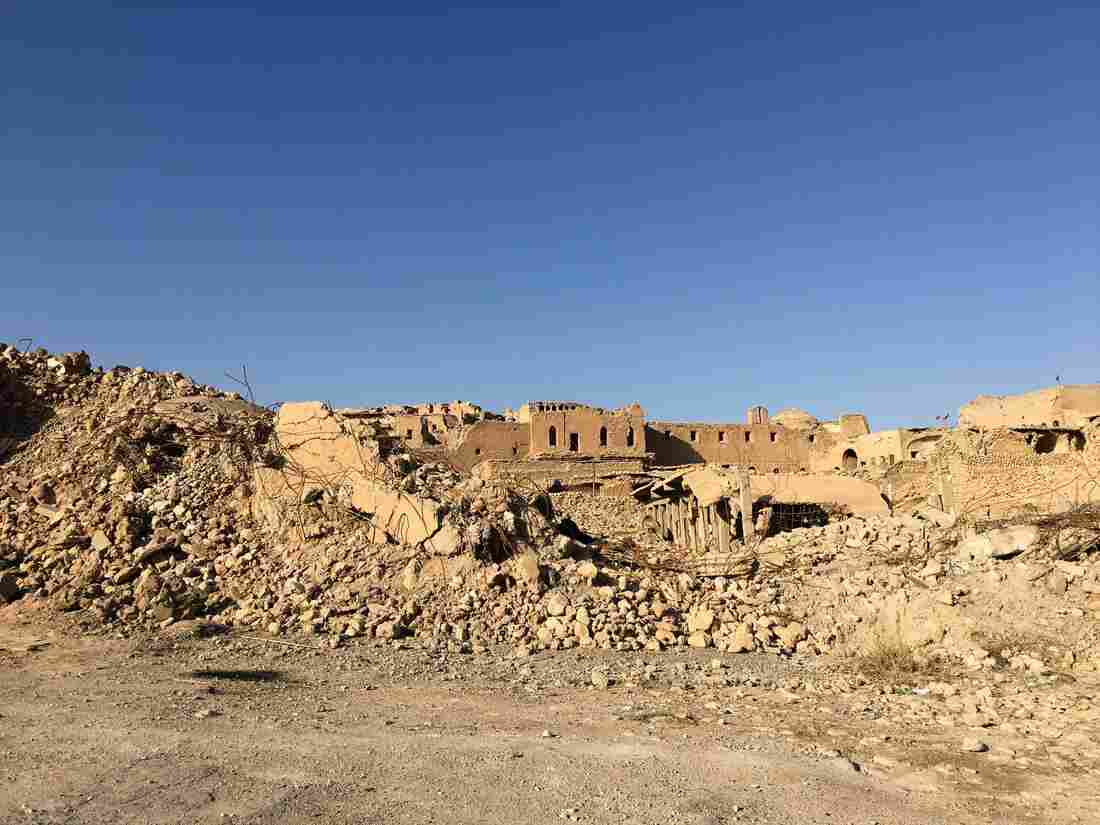 Almost 70 percent of the town of Sinjar was damaged or destroyed in the U.S.-backed fight by Iraqi forces against ISIS. Two years after ISIS was driven out, no one has money to rebuild. Jane Arraf/NPR hide caption 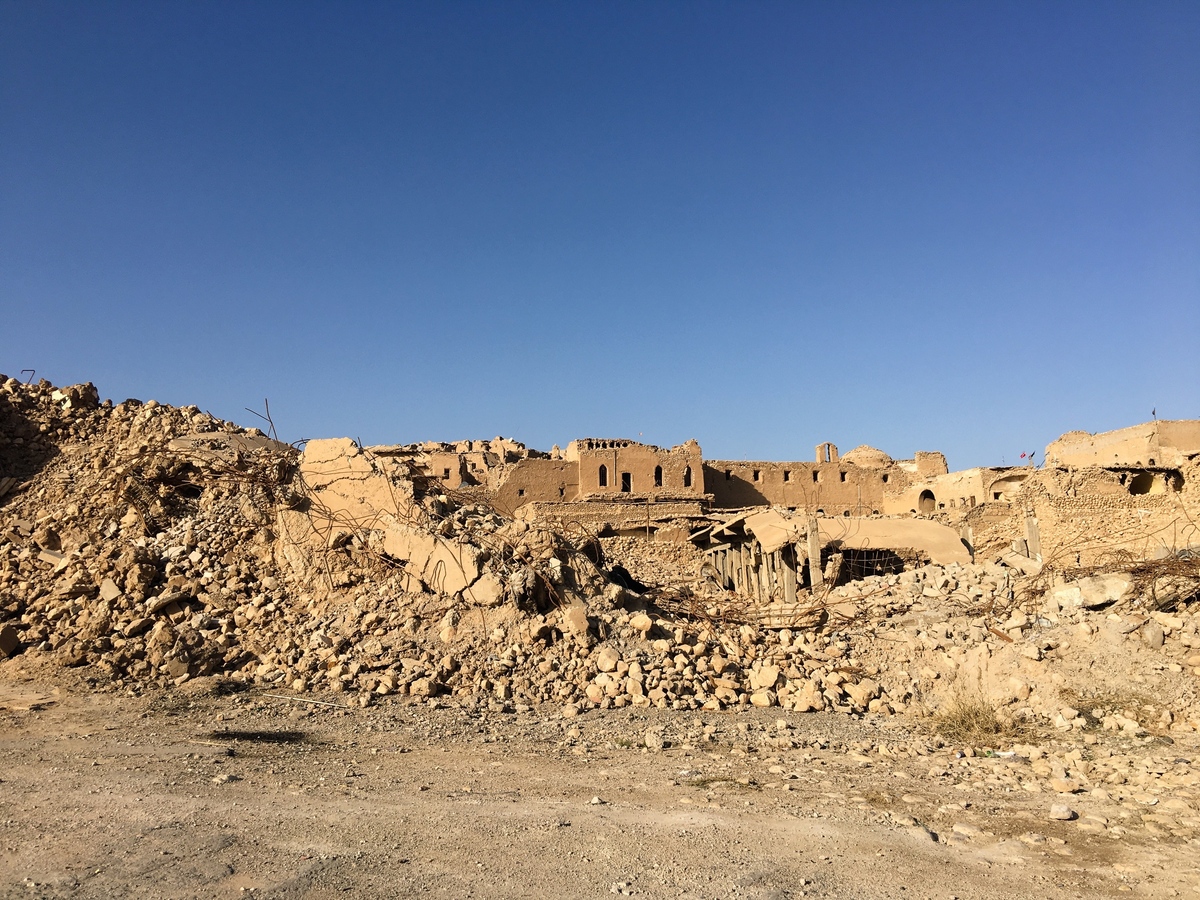 Almost 70 percent of the town of Sinjar was damaged or destroyed in the U.S.-backed fight by Iraqi forces against ISIS. Two years after ISIS was driven out, no one has money to rebuild.

He says local ranchers were unable to get their sheep to market because the Kurdish government cut off access to the Kurdistan region in a territorial dispute with Baghdad. The only alternative was Mosul — which was controlled by ISIS for three years and which Yazidis say is still too dangerous for them.

Sinjar mukhtar Faisal Khalaf says only about 4,000 of the 50,000 families who lived in Sinjar have returned to the town. Almost 70 percent of its buildings have been damaged or destroyed. Many of the streets are empty and silent — lined with the rubble of collapsed houses. There's no money to rebuild.

"Most of the people are jobless here," says Khalaf, 52. "People don't have money, and the ones who had money lost it four years ago."

Khalaf says the Yazidis are grateful to the U.S. for fighting ISIS, but they need help to guarantee their safety now.

"The only thing we want from the international community is to provide us good security so we can be safe here," he says.

Yazidis say Sinjar has been neglected by both the Kurdish and Iraqi governments. Iraqi forces took from the Kurds long-disputed territory, including Sinjar, after a Kurdish referendum last year on independence from Iraq. Iraq's central government has a dismal record of providing aid and government bureaucracy has left many aid organizations in limbo.

The United States says it channels aid through the U.N. and other organizations, but hardly any of those groups are operating in the area.

At Sinjar's damaged hospital in February, a tiny British organization, Road to Peace, was the only aid group working there. 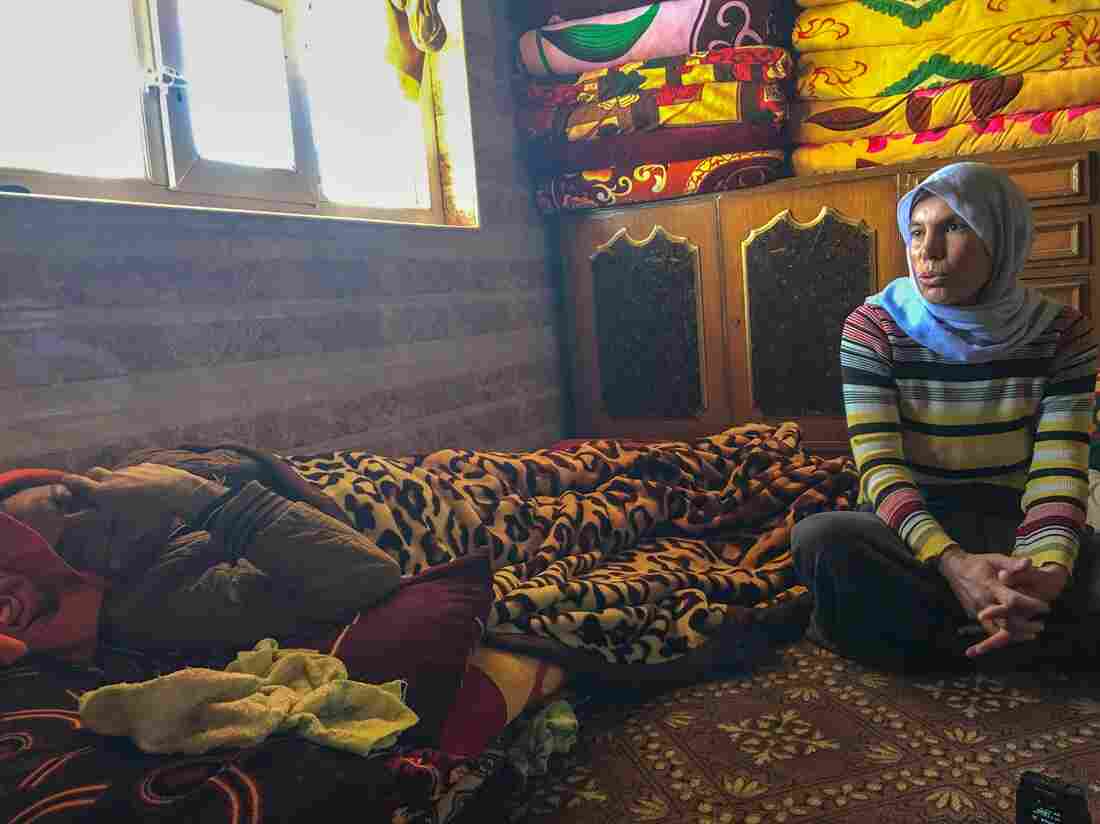 Shireen Hassam, whose 2-year-old daughter died in January of malnutrition and dehydration. Her husband Osman Barkat, lying down, was wounded in an explosion near Sinjar in December. Jane Arraf/NPR hide caption 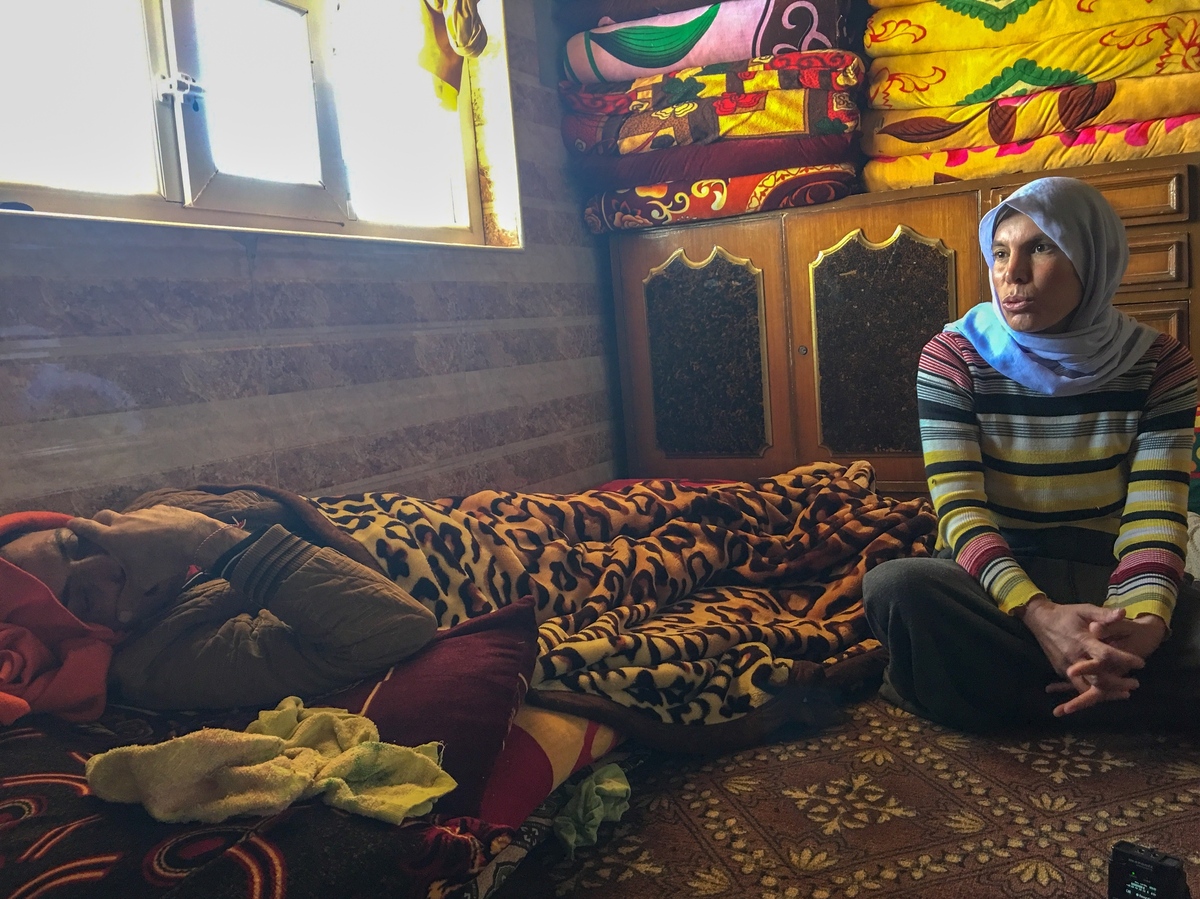 Shireen Hassam, whose 2-year-old daughter died in January of malnutrition and dehydration. Her husband Osman Barkat, lying down, was wounded in an explosion near Sinjar in December.

A 2-year-old Yazidi girl died in the town in January, malnourished and severely dehydrated. Mourad Sinjari, a pharmacist on duty at the hospital at the time, says there was no intensive care unit, specialist, electricity or heat. With no transportation to take the child to another city's hospital, the family took her home, where she died.

"We tried our best," says Shireen Hassam about her daughter Wargheen. "We were borrowing money and doing four to five tests every few days. We couldn't afford any more."

Sinjari says there are other cases of malnutrition in Sinjar, "but they are not coming to the hospital because there is nothing to give them."

UNICEF says it is unaware of cases of severe malnutrition in the area. The United Nations supports a hospital in Sununi, on the other side of Mount Sinjar. But few Yazidis living in the town of Sinjar or on the mountain can afford to get there.

On a visit in February to the Sinjar hospital, a young Yazidi woman could be heard screaming in terror as she was admitted. Staff there said she had psychiatric problems. The hospital — which is serving a community where women were kidnapped and kept as sex slaves and men were massacred — has no psychiatrist.

On Mount Sinjar, you can still see the traces of Yazidis' attempts to escape the latest massacre.

Flashes of fading color among the rocks and bushes mark clothing and other belongings abandoned by thousands of terrified Yazidis as they climbed higher up the huge mountain in 2014 to escape being killed.

"There were thousands and thousands of people walking," says Hadi Ahmed, 29, on one of the trails that escaping families took. "It was summer — the weather was very hot and we didn't have food or water."

On the day in August that ISIS attacked, the temperature was over 100 degrees.

"Many people died," Ahmed says. "I saw their bodies on top of the mountain — kids and men and women."

Mount Sinjar is part of a range of peaks 60 miles long, spanning the Iraqi-Syrian border. The broad territory and its crevices that allowed Yazidis to hide also prevented aid dropped by helicopter by the U.S. and others from reaching everyone.

Some Yazidis tried to escape by car, but the roads out of Sinjar were jammed with military trucks carrying Iraqi Kurdish peshmerga fighters, given the order by Kurdish regional government commanders to retreat rather than fight ISIS.

After the peshmerga withdrew, Turkish Kurdish guerrilla fighters, many of them women, arrived and led several thousands of Yazidis around the mountain, through part of Syria, and into safety in Iraqi Kurdistan.

"If not for the mountain, ISIS would have killed everyone — all Yazidis. But the mountain saved our people," Ahmed says. "ISIS didn't know the mountain, but we know it."