Accessibility links
In Denmark's Plan To Rid Country Of 'Ghettos,' Some Immigrants Hear 'Go Home' : Parallels Officially designated as "ghettos," 25 areas with a high percentage of immigrant residents will be abolished. The government's goal is integration. "What they mean is 'go home,'" one immigrant says. 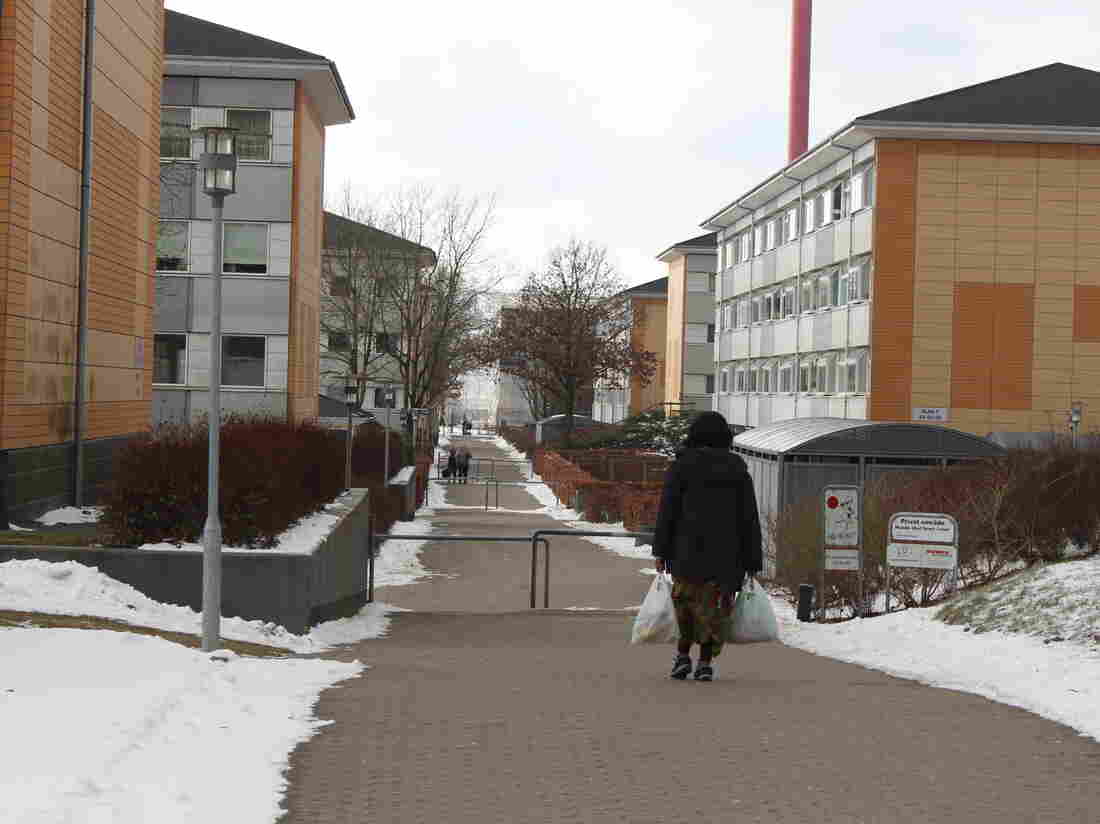 A woman walks in Skovparken, an officially designated "ghetto" in the Danish city of Kolding. Sidsel Overgaard for NPR hide caption 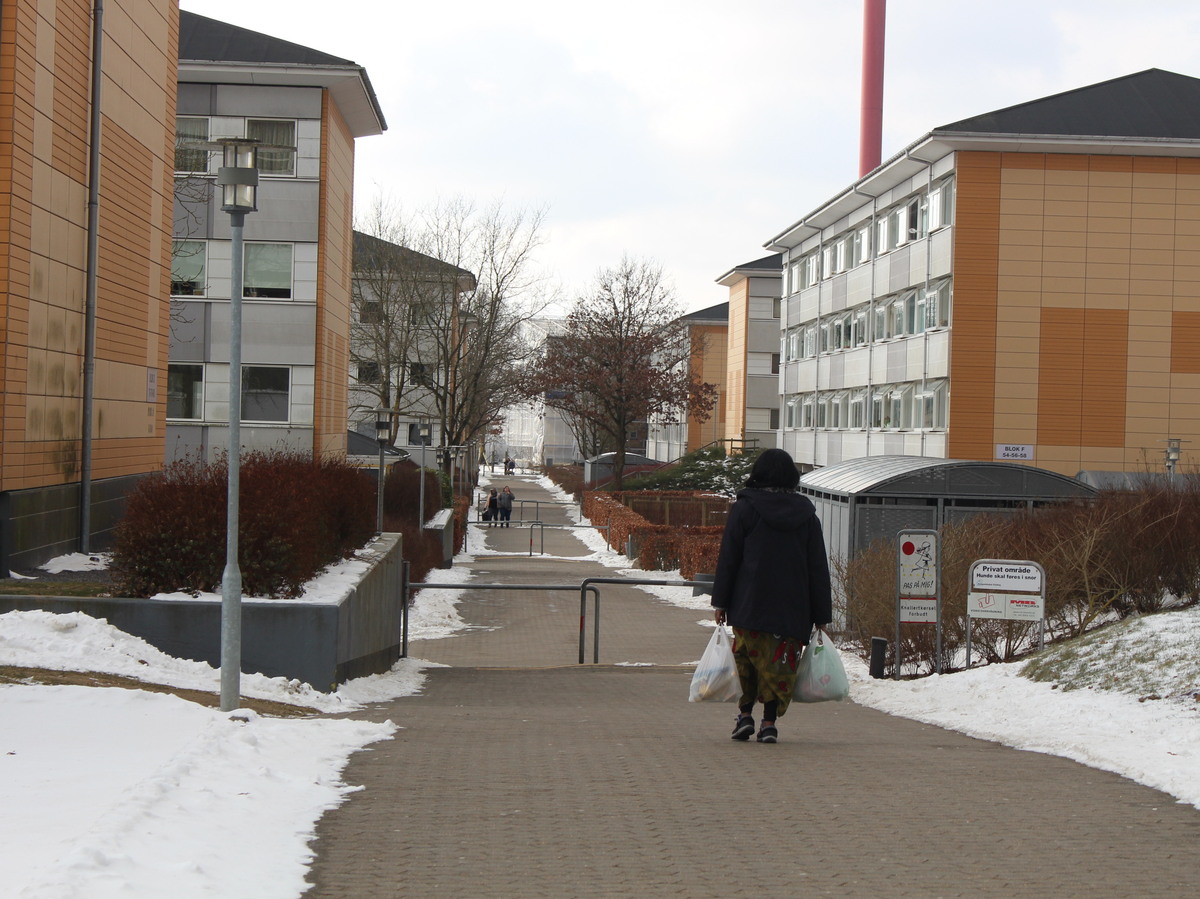 A woman walks in Skovparken, an officially designated "ghetto" in the Danish city of Kolding.

In a move aimed at ensuring an integrated Denmark without "parallel societies" and to protect "Danishness," the Danish government recently released a plan to rid the country in the next 12 years of areas it officially calls "ghettos."

In Denmark, the word "ghetto" is a legal designation typically applied to a neighborhood with more than 1,000 residents, meeting at least two of the following three criteria (though additional criteria are sometimes also applied):

Political leaders refer to these areas as "holes in Denmark's map," where Danish language and values are lost to generation after generation of residents.

Currently, there are 25 ghettos in Denmark, scattered throughout the country. Of the 60,000 people living in these areas, two-thirds are from non-Western countries including Turkey, Syria, Iraq, Lebanon, Pakistan and Somalia.

Because these neighborhoods are dominated by apartment buildings with cheap rents, refugees on "integration support" have often been placed there by public authorities. But many immigrants choose to live there on their own.

Prime Minister Lars Løkke Rasmussen says that while the number of first- and second-generation, non-Western immigrants has grown from 50,000 in 1980 to almost 500,000 today, "people with the same problems have clumped together, [and] we have let it go, perhaps with the naïve idea that integration would happen on its own over time, because this is such a great country with so many possibilities... But it hasn't happened. The problem has grown."

It's not the first time the government has launched a strategy to abolish ghettos. In fact, there have been several in the last two decades. But rather than issuing broad-brush decrees, as has been tried in the past, this time 13 of the plan's 22 initiatives apply only to ghettos or similarly defined "vulnerable areas," and the people who live there.

The strategy includes four areas of focus: physical redevelopment, control over who is allowed to live in these neighborhoods, crime abatement and education. The overarching goal is for these areas to become more attractive to ethnic Danes, while non-Western immigrants will disperse into other, more mixed neighborhoods.

Some of the more controversial initiatives include a plan to double the normal punishment for crimes committed in the ghettos, and a requirement that children living in vulnerable areas start attending daycare for at least 30 hours a week as soon as they turn 1.

Critics argue that in trying to protect Danish values, these targeted regulations will undercut one of the most important: equality before the law.

A few days after the plan's release, Idil Ahmed emerges from a supermarket in the city of Kolding. In this market, located in the heart of one of the city's two designated ghettos, the shelves are lined with za'atar, okra, makdous — imports that would be hard to find in a typical Danish grocery store. Ahmed hesitates a moment before putting down her three bags.

She says she arrived in Denmark from Somalia several decades ago, at age 17. Speaking in Danish, she explains that at first, she felt welcome here, perhaps because immigrants were less visible then. But recently, the tone has changed.

Ahmed says she hasn't read the entire government plan, but she understands the premise: one set of rules for the rest of Denmark and a different set for her and her neighbors.

Ahmed says she's considering it, even though she has a job and three grown sons, all born in Denmark.

"Even though I came as a child," she says, "I think, 'This is a bad feeling. I cannot grow old in this country.'"

Some residents see positive elements of the plan, like the promise of an increased police presence. But overall, Ahmed worries that the constant negative attention is causing resentment among her Danish neighbors.

Take Finn Nørbæk, an ethnic Dane who lives in the same area. He says he likes it there and has never had any problems — this particular ghetto is known as one of the safest. Still, he says, sometimes he does think there are too many immigrants living in one place, and some of them seem to have nothing to do.

He points to a tall young man entering the shop.

"See him over there?" he says, lowering his voice. "He doesn't do anything. He just gets money. They just want money."

Even opponents of the plan, who tend to favor a more carrot-based approach, agree that unemployment is a very serious problem in Denmark's ghettos. According to the government, a third of non-Western immigrants have been out of work or school for four of the last five years.

That said, what may be most surprising about this plan is how little criticism it faces, especially from the country's largest opposition party, the center-left Social Democrats.

It's part of a growing European trend that is particularly evident in Denmark: Social Democrats are taking a harder line on immigration as they try to win back working-class voters who have veered toward nationalism.

Shortly after President Trump won the Republican nomination in 2016, Danish Social Democrat leader Mette Frederiksen crafted a prescient Facebook post: "We have to admit that the people he speaks to are feeling heard for the first time in a long time, and have been missing a voice that puts words on their fears and frustrations."

Back in the Kolding ghetto, Ahmed Said, who has lived in Denmark for 15 years, says he now sees those fears expressed constantly.

Said says ultimately it doesn't matter whether the government uses carrots or sticks. Gesturing toward the high rises all around, he says that until Danes take a hard look in the mirror, nothing will change.

He points in the direction of a former school building and explains how, as foreign children began to fill the classrooms, Danish children moved out. Eventually, the school was shut down.

"If they do it again, and they move Somalis to another place where there are only Danish people living, they're going to do the same, the Danish," Said says. "They're going to leave."

If integration is actually the goal, he says, it has to be a two-way street.