Accessibility links
Putin Fends Off Fire And Fury, At Home And Abroad : Parallels Russia's government has used the Siberian mall fire and diplomatic expulsions to help portray Putin is the only man who can protect and lead Russia through tough times. 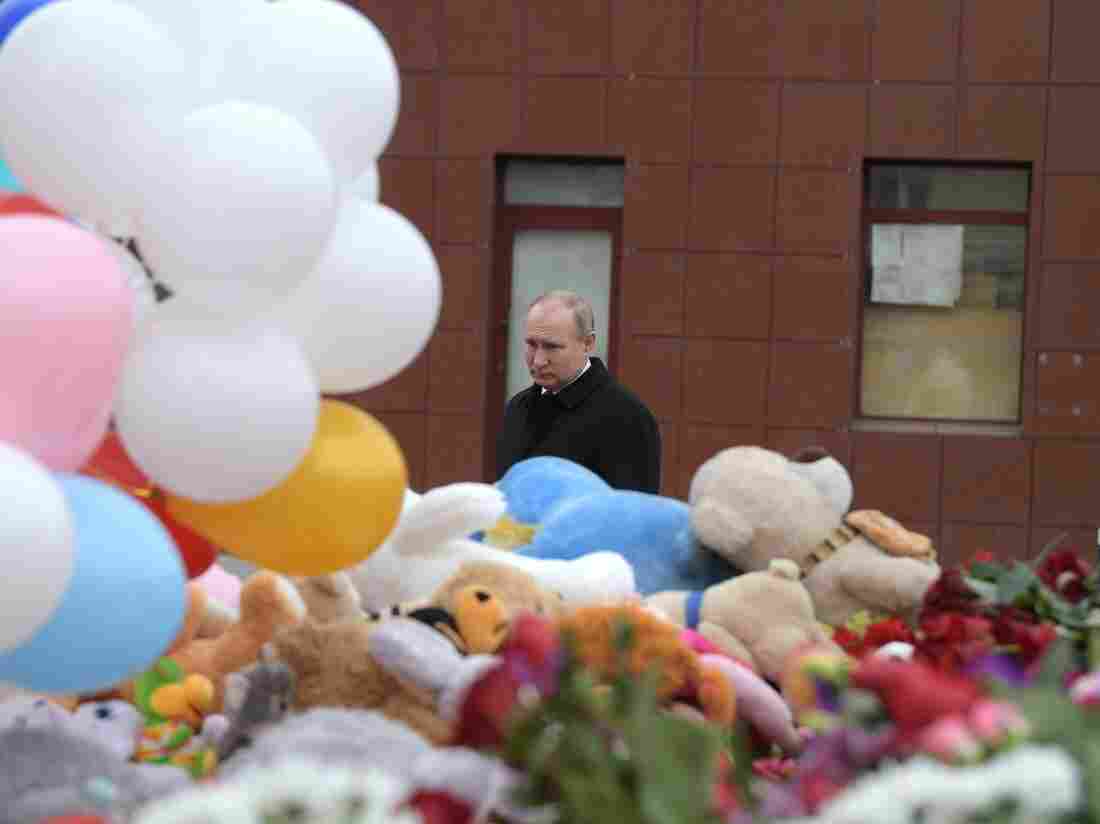 Russian President Vladimir Putin lays a flower at a shopping mall in Kemerovo two days after more than 60 people were killed on Sunday in a fire. Anadolu Agency/Getty Images hide caption 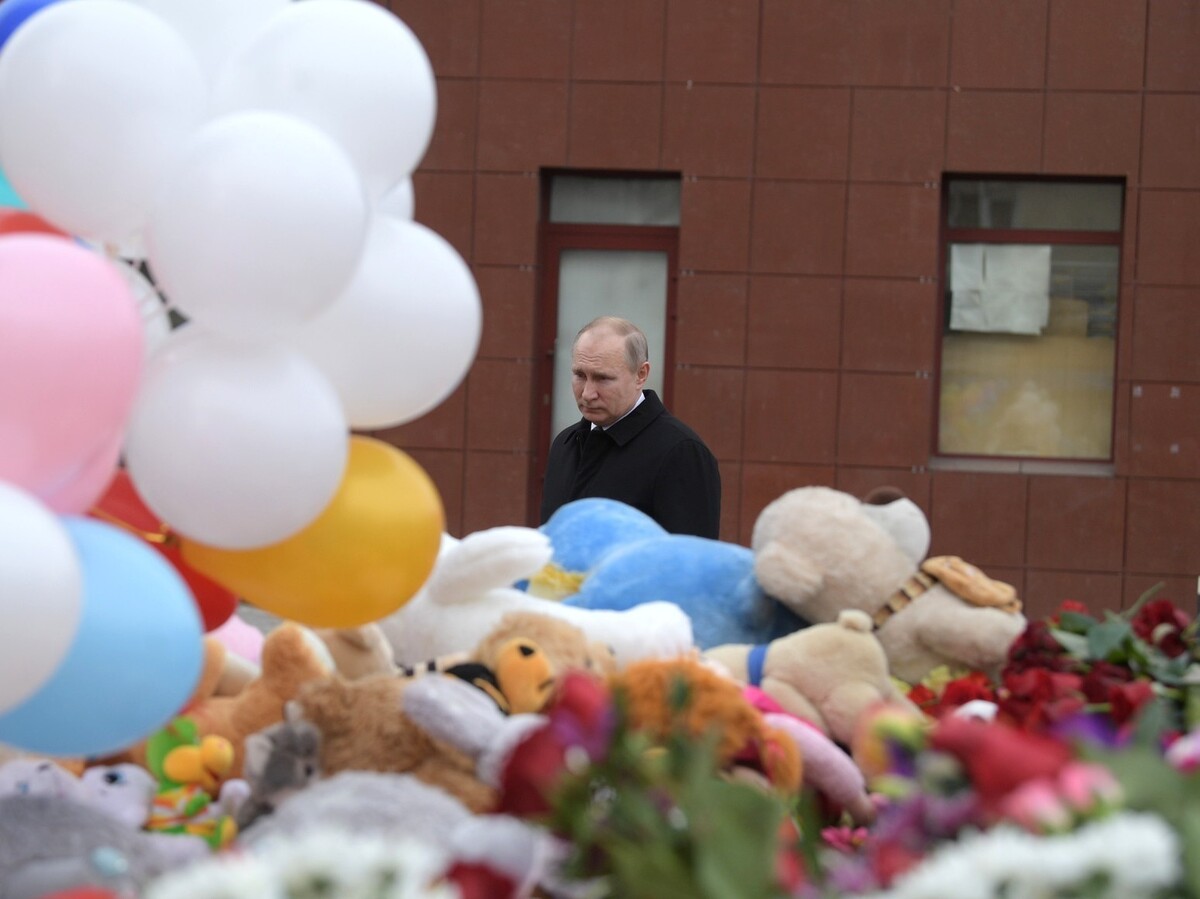 Russian President Vladimir Putin lays a flower at a shopping mall in Kemerovo two days after more than 60 people were killed on Sunday in a fire.

Just a week ago, Russian President Vladimir Putin was basking in an election victory that gave him a strong mandate for another six years in power.

But within days of thanking his fellow Russians for handing him nearly 77 percent of the vote, Putin is now dealing with one of the biggest challenges of his 18-year rule.

At home, grief has turned into anger over a fire in a shopping mall in Siberia on Sunday that killed 64 people. And internationally, Russia is facing increasing isolation after the United States and two dozen countries this week expelled more than 100 Russian diplomats to protest the poisoning of a former Russian intelligence officer living in Britain — which Moscow denies having anything to do with.

While both disasters have the potential of scratching Putin's legendary popularity among Russians, the Kremlin is trying to craft its message to make the president come out looking like the only man who can lead Russia through tough times.

"I would like to express my condolences and support to our leader, Vladimir Putin," Yelena Mizulina, a Russian senator, said during a talk show on state television after the fire. "For him, this is a stab in the back, a terrible shock, because of all that he's doing for Russia — incredible things, defending us on the global stage and conducting reforms at home with incredible strength."

On Monday, as Russians learned of the rising death toll from the fire in Kemerovo and then of the mass diplomatic expulsions, Putin was largely absent, only surfacing for TV cameras to receive the emir of Qatar in the Kremlin.

But the next morning, as Moscow was just waking up, Putin was already in Kemerovo, a four-hour flight away, lambasting "criminal negligence" for the fire while the region's governor, Aman Tuleyev, sheepishly asked him for forgiveness for the tragedy. The image of the good czar surrounded by corrupt and incompetent ministers was complete.

The president's Kemerovo visit was intended to put him on the side of the people. But even as Putin met with relatives of victims and visited survivors in a hospital, hundreds of local citizens rallied on the town's central square to express their grief and frustration with local officials. According to the official count, Putin won more than 85 percent of the vote in Kemerovo region, the heart of Siberia's coal country. 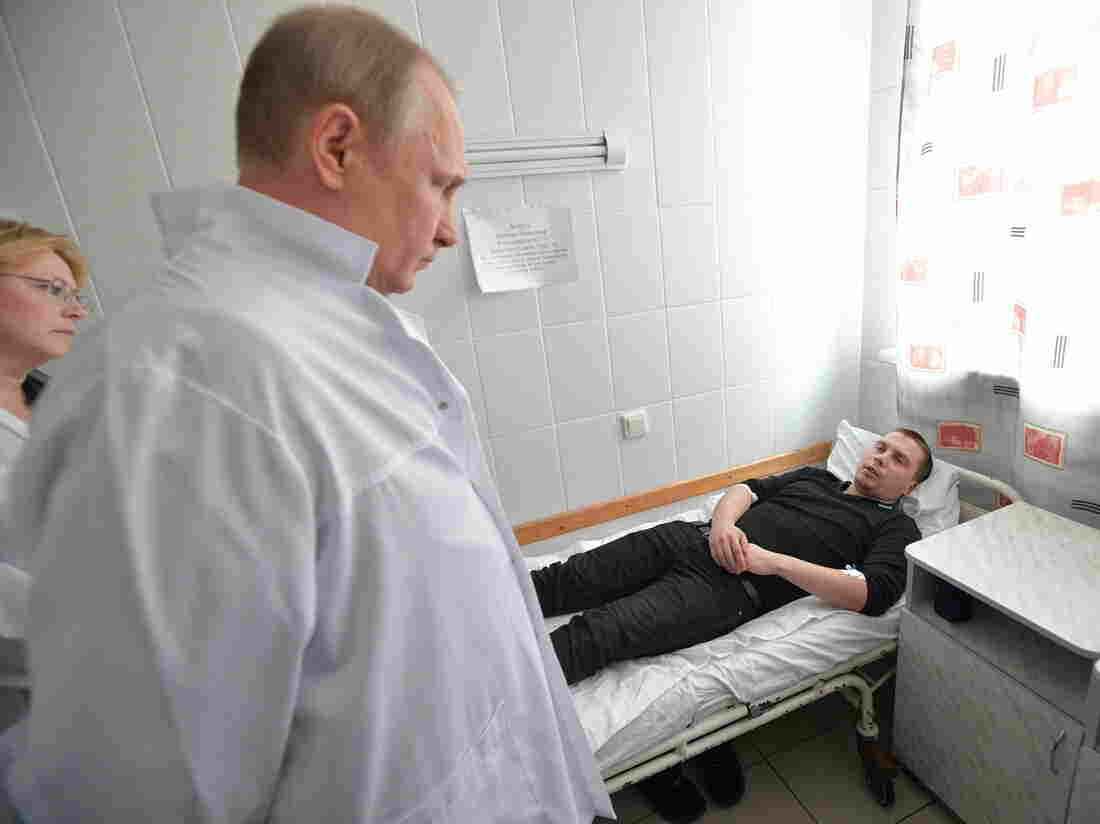 Putin visits a hospital to check on people injured in a fire that engulfed the Zimnyaya Vishnya shopping center in Kemerovo. Alexei Druzhinin/TASS hide caption 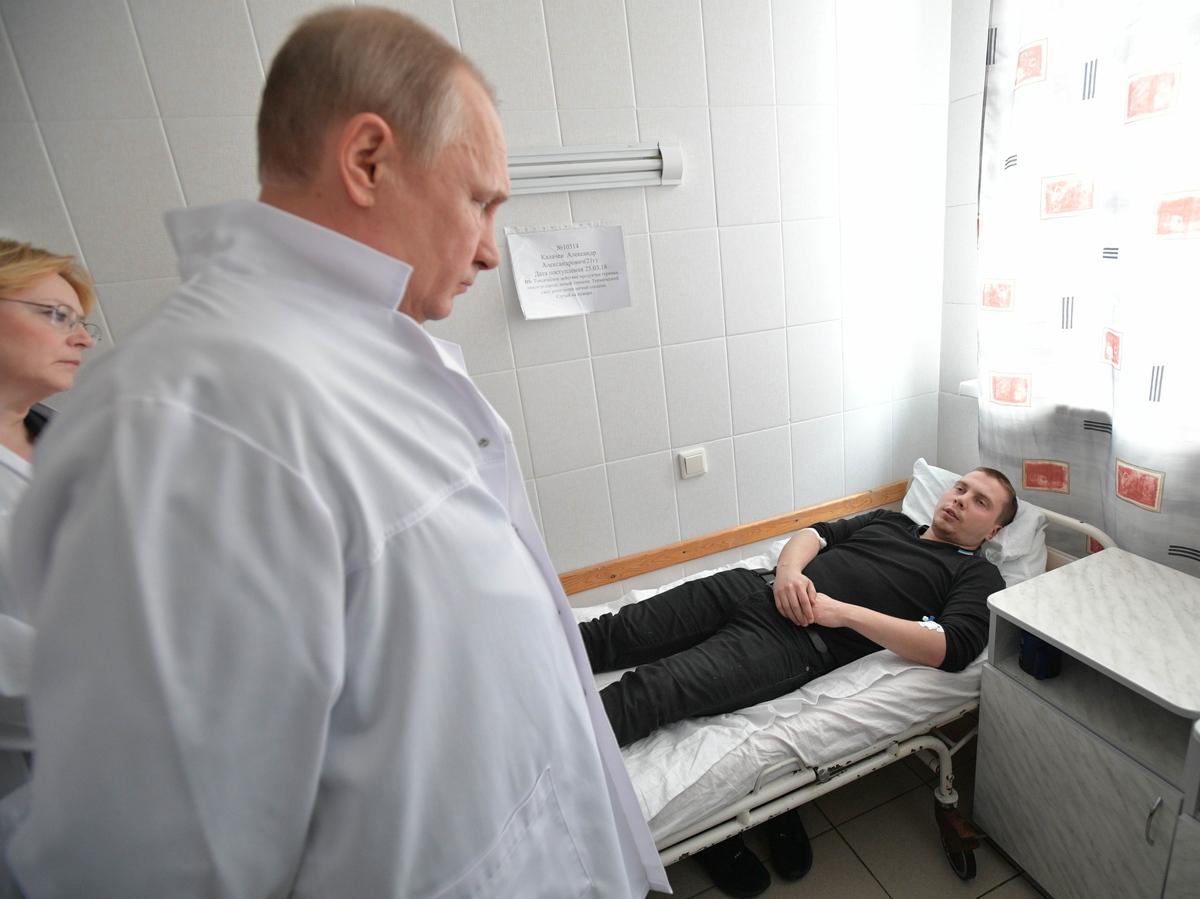 Putin visits a hospital to check on people injured in a fire that engulfed the Zimnyaya Vishnya shopping center in Kemerovo.

The Kremlin is wary of gatherings not organized by the authorities, especially those voicing social or political discontent. At the Kemerovo rally, some people demanded Tuleyev's and even Putin's resignation; in Moscow, the mayor's office hastily organized a public memorial after a Facebook group called on Muscovites to commemorate the Kemerovo victims on Pushkin Square.

Russians took to social media to ask why it was taking so long for Putin to declare a national day of mourning. With little trust in public servants, many also questioned the official death toll, opening the way for wild rumors.

"Unfortunately we're seeing false stories spreading through social media, including from abroad, to sow panic and mistrust, and to pit people against one other," Putin told Russia's top investigator on Wednesday. "Needless to say, this should not be allowed under any circumstances."

Russian investigators opened a criminal case against a Ukrainian citizen for inflating the death toll online. One of Putin's top advisers, Sergei Kiriyenko, warned darkly that the Kemerovo tragedy would be used for pre-planned "provocations."

That didn't stop one of Putin's most vocal critics, opposition leader Alexei Navalny, from releasing a scathing video that already has more than 3.7 million views on YouTube. Navalny, who was barred from running against Putin in the presidential election, articulated a widely shared view, namely that corruption was the real killer in Kemerovo, since fire safety inspectors can be bought off with bribes.

As Putin was dealing with the fallout from the fire, he left Russia's response to the growing diplomatic crisis largely to the Foreign Ministry. The ministry's spokeswoman, Maria Zakharova, skewered the U.S. and its allies for announcing the expulsion of more than 100 Russian diplomats on the same day that her country was just beginning to mourn the dead from Kemerovo.

As with the blaze in the shopping center, officials scrambled to portray the unprecedented diplomatic fiasco as an event that was beyond Putin's control. According to the Kremlin, the real cause of the mass expulsions was an anti-Russian campaign propagated by enemies in London and Washington.

The British government's accusation that Russia was behind the nerve-agent attack on former Russian double agent Sergei Skripal and his daughter in southern England was met with a standard response: Where's the evidence?

The Kremlin has reacted the same way to past charges that Russian athletes used performance-enhancing drugs, that Russian soldiers were fighting in Ukraine or that Russian hackers had tried to interfere in the 2016 U.S. elections.

On Wednesday, the Foreign Ministry said in a statement that Britain has shown it can't protect the lives of Russian nationals on its territory and that the burden of proof lies with London to show that British intelligence didn't attempt to murder the Skripals.

The next day, Foreign Ministry spokeswoman Zakharova attacked the West's credibility, comparing the British case against Russian poisoning with Washington's false statements about weapons of mass destruction before the 2003 U.S. invasion of Iraq.

In the same way that the United States had corralled smaller European nations to participate in the "coalition of the willing" in that war, she said, the Trump administration pressured other countries to join in the mass diplomatic expulsions. Putin has said in the past that the United States doesn't need allies but "vassals."

The Kremlin said that Putin would personally decide how to react to the expulsions, and on Thursday the Foreign Ministry began its "reciprocal" response, first sending home 60 U.S. diplomats and closing the American consulate in St. Petersburg, then retaliating in kind against the other countries.

Yet even as the Foreign Ministry took the United States to task, the tone out of the Kremlin was more moderate. On Wednesday, Putin's spokesman Dmitry Peskov said Russia is interested in good relations with all countries, including the United States.

It seems that Putin is still hoping for a summit with Trump. The starkest symbol of Russia's isolation would be if the U.S. president ends up meeting with North Korean leader Kim Jong Un first.