Accessibility links
Families Divided: President Trump's Travel Ban Strands Some U.S. Citizens Abroad : Parallels Trying to flee the war in Yemen, some U.S. passport holders are stuck in Djibouti due to slow immigration processes and the Trump administration's ban on travel from countries including Yemen. 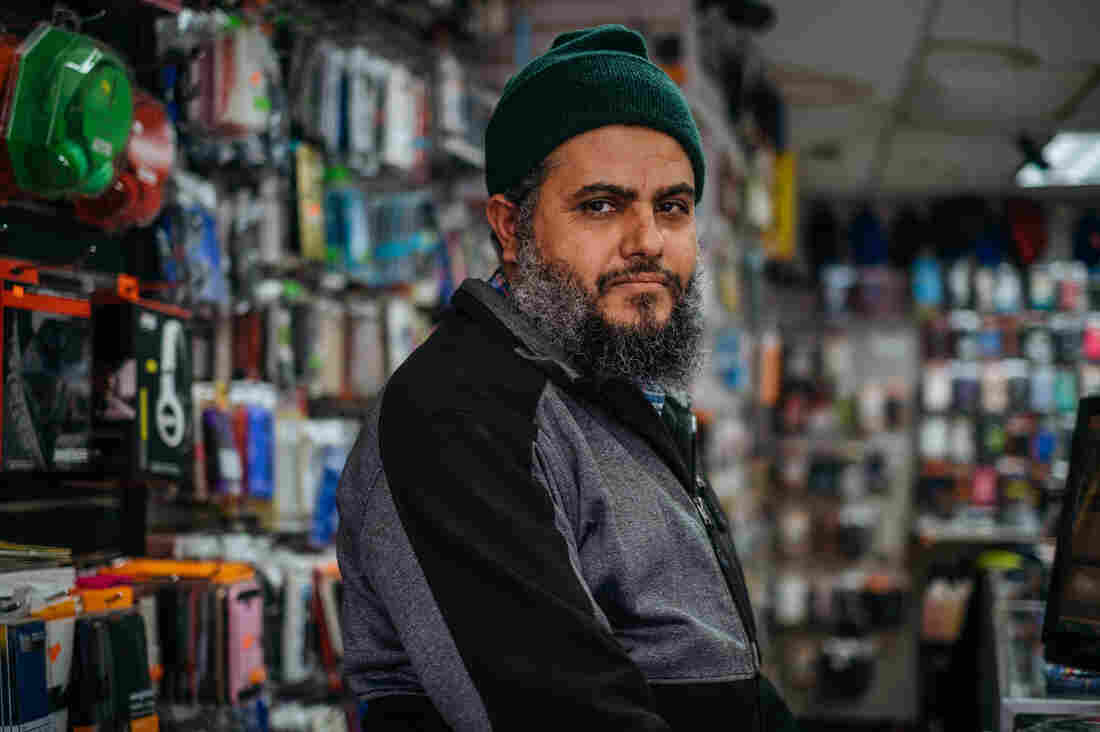 Mohamed Hamza, a Bronx-based cellphone shop owner, is a U.S. citizen from Yemen. His 3-year-old son is also a U.S. citizen, but Hamza's wife and another child are not â and have not received visas to travel to the U.S. Hamza's wife and the two children are stuck for now in Djibouti. Melissa Bunni Elian for NPR hide caption 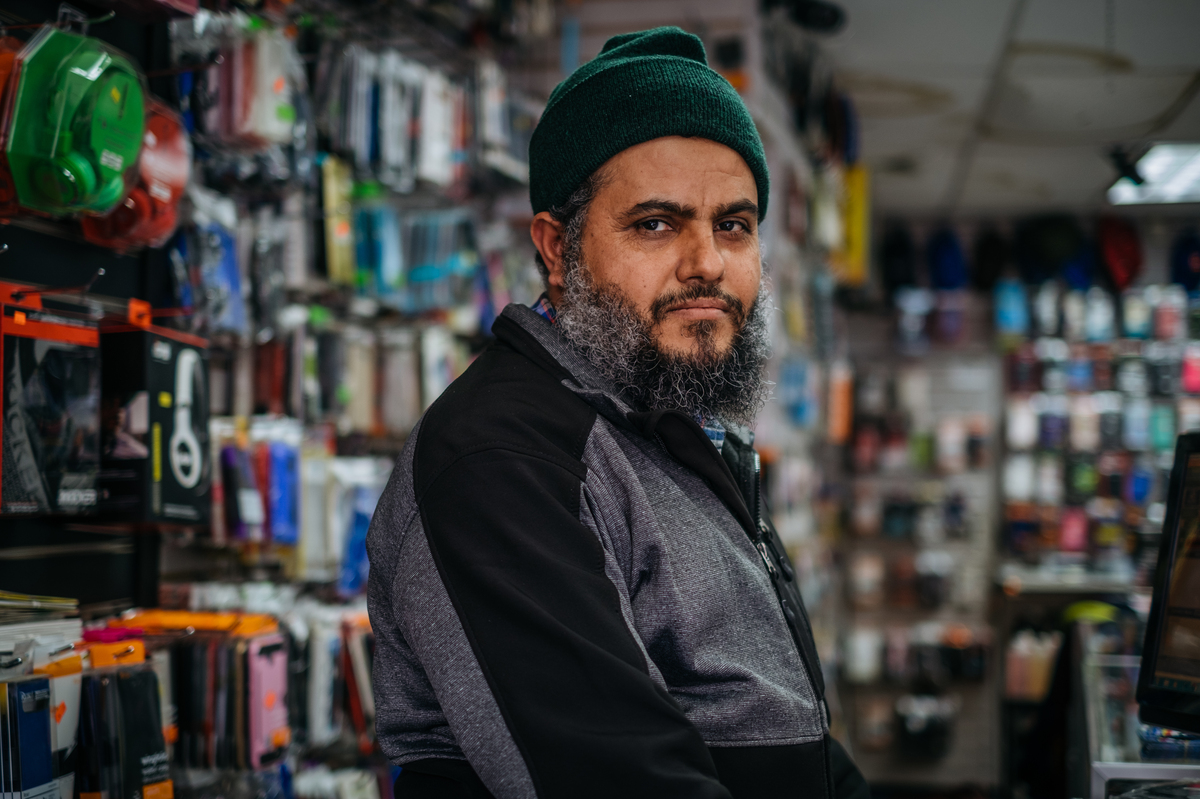 As people try to flee the war in Yemen — which U.N. agencies have labeled the "world's worst humanitarian crisis" — some Yemeni-Americans living in the United States have been able to get family members out of Yemen and to temporary safety in countries in East Africa. But the next step, to the U.S., is blocked.

While exact numbers are difficult to ascertain, it's clear that even some U.S. passport holders are at risk. For now, they're stuck, due to slow U.S. immigration processes affecting other family members and President Trump's ban on travel from eight countries, including Yemen. An NPR team recently learned of a dozen Yemeni-American families that have been split, with spouses or children in limbo abroad.

Among those affected are family members of Mohamed Hamza, a resident of the Bronx. He is one of many Yemeni-Americans who operate bodegas and cellphone stores across New York City. Just like previous waves of immigrants from Italy or Ireland, many work in America to support relatives whom they could not bring with them. 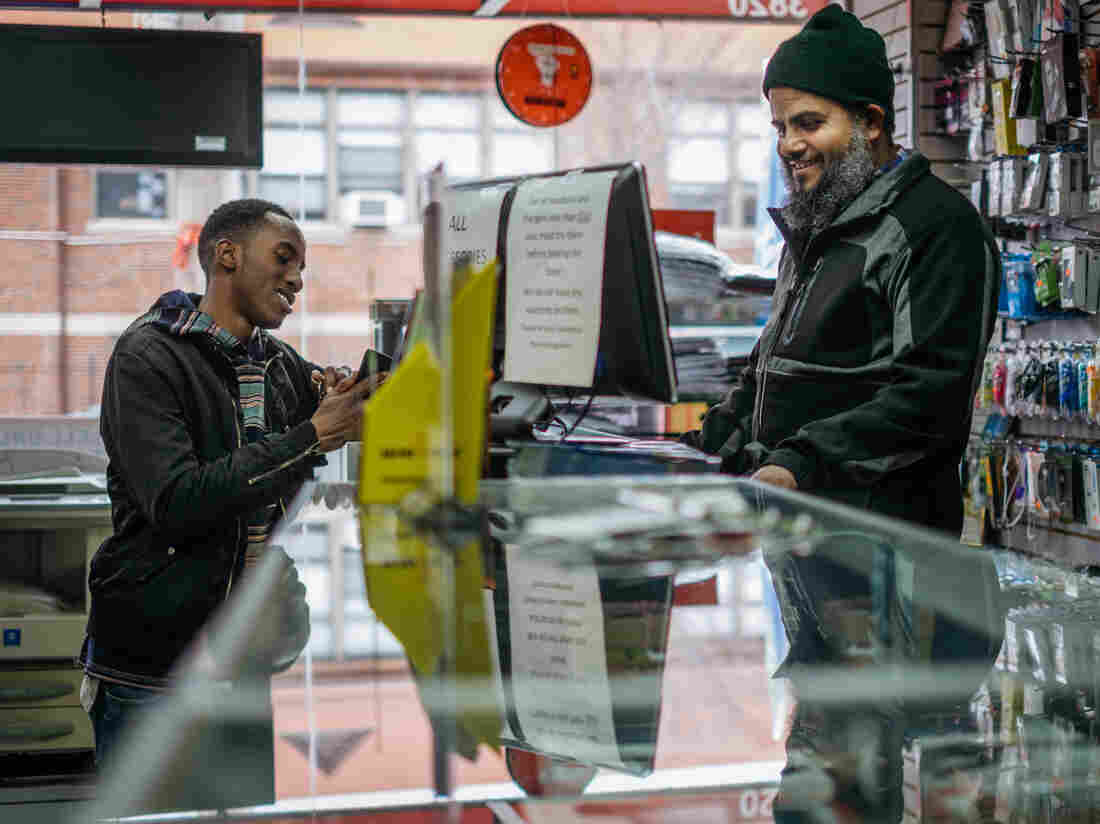 "My family has no country," says Mohamed Hamza, a Bronx-based cellphone shop owner who has been in the Unites States for two decades. "If you were in my shoes, you would know. It's not right to separate family." Melissa Bunni Elian for NPR hide caption 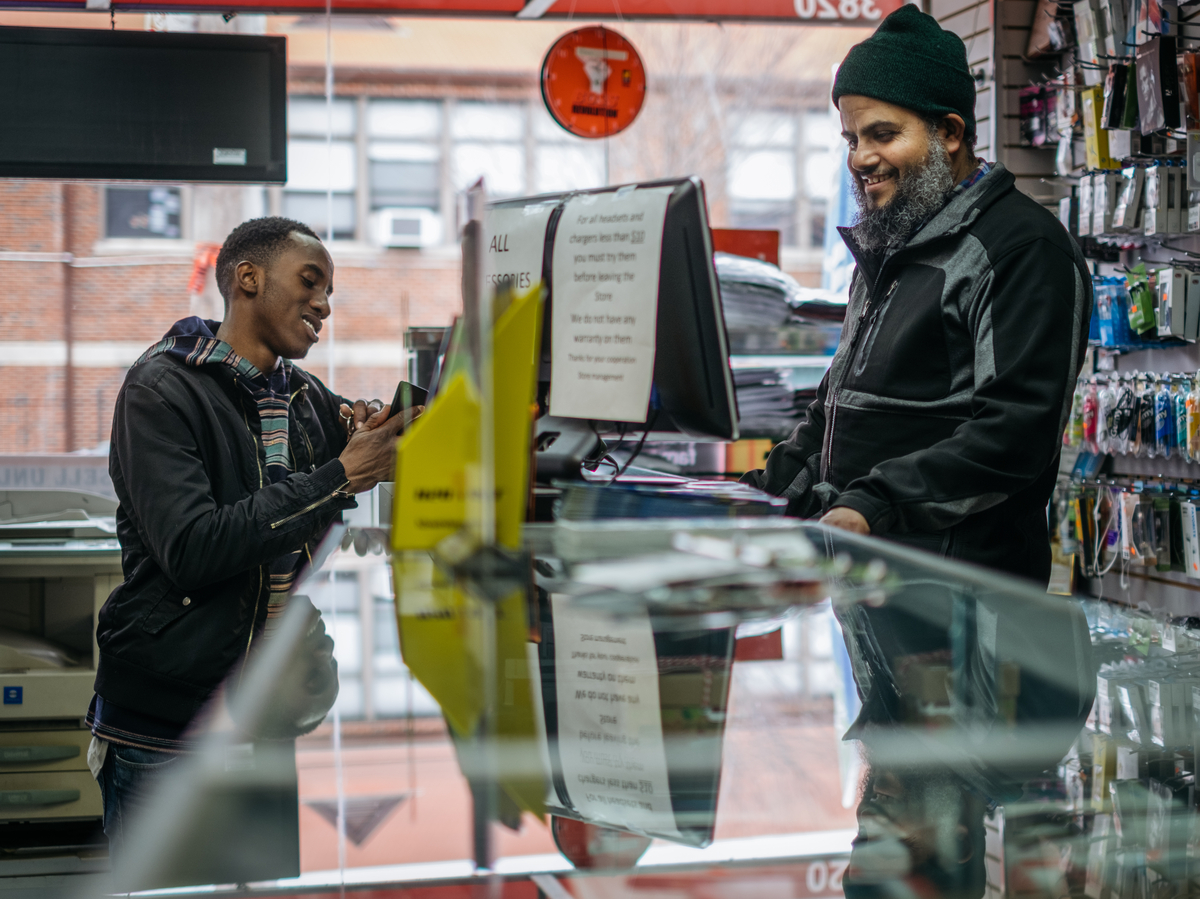 "My family has no country," says Mohamed Hamza, a Bronx-based cellphone shop owner who has been in the Unites States for two decades. "If you were in my shoes, you would know. It's not right to separate family."

"What do you do is, every month, you send them the money," explained Zaid Nagi, the head of the Yemeni American Merchants Association and a U.S. citizen who has lived in the United States since 1994. "So you literally — you are a candle burning itself so for others to survive."

This is what Hamza did for about 20 years. He periodically returned to Yemen to see his wife and they started a family. He became a U.S. citizen. It all worked until Yemen's civil war broke out in 2015, and endangered the family.

Hamza's wife Saba and their 18-year-old daughter, who are not U.S. citizens, could not apply for U.S. visas from Yemen — it's so dangerous now that the U.S. embassy is closed. So they escaped in July 2016 across the Red Sea to reach Djibouti in East Africa. But, Hamza said, the U.S. consulate there has not yet given his wife and daughter visas.

"My family is separated," he said.

His 3-year-old son is a U.S. citizen, but since his older sister and mother are not, all three are stuck.

"The toddler has a U.S. passport, but who's going to take care of him here?" Hamza said. He explained that he cannot care for his son alone in New York since he is working to support his family: "He has to stay with his mom and his older sister."

"They left while I was asleep"

In a windowless room in an apartment in Djibouti, 3-year-old Suleiman clambered into his mother Saba's lap and gave her a hug. He was clutching a blue U.S. passport — his passport.

Saba, Hamza's wife, misses her husband. "I wish I could be with him," she said.

After the war began, the family fled by boat. They found a place in this apartment building, which is filled with Yemenis.

Hamza came over in 2017, hoping to bring everyone home to the Bronx with him. He was able to take home three of his five children — two have green cards and one is a citizen — but Saba and Fatima have yet to receive visas and continue to stay in Djibouti with Suleiman.

"They left while I was asleep," Fatima recalled. "They didn't tell me because they didn't want to upset me." She was covered in a black abaya and niqab. All that was visible were her eyes, which welled up as she brushed away tears.

Saba and Fatima believe they still have a chance at visas. They've waited for months but have not received a final rejection. Others know for certain they are blocked by President Trump's travel ban. 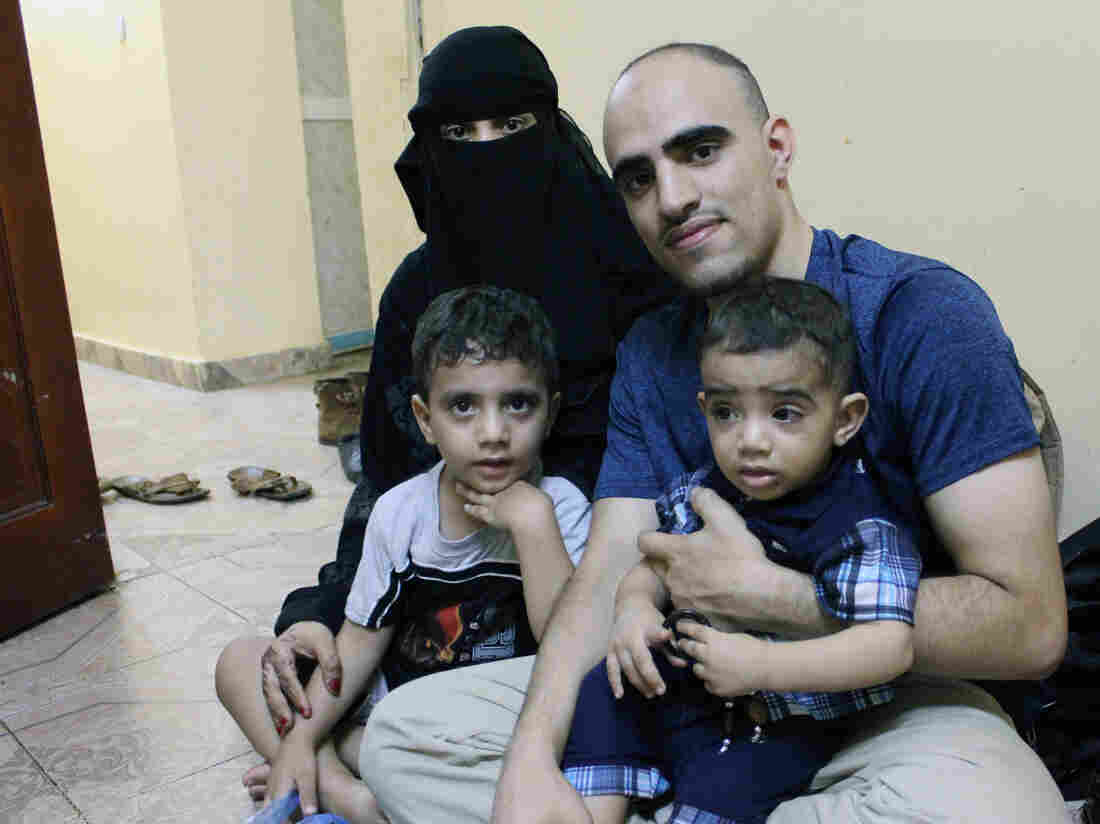 Amr Mozeb, shown here with his wife Wahdeh and their two sons at their home in Djibouti, spent his high school and college years in the U.S. and was naturalized as a teenager. His children are U.S. citizens, but his wife, a Yemeni national, has been denied a U.S. visa. Arezou Rezvani/NPR hide caption 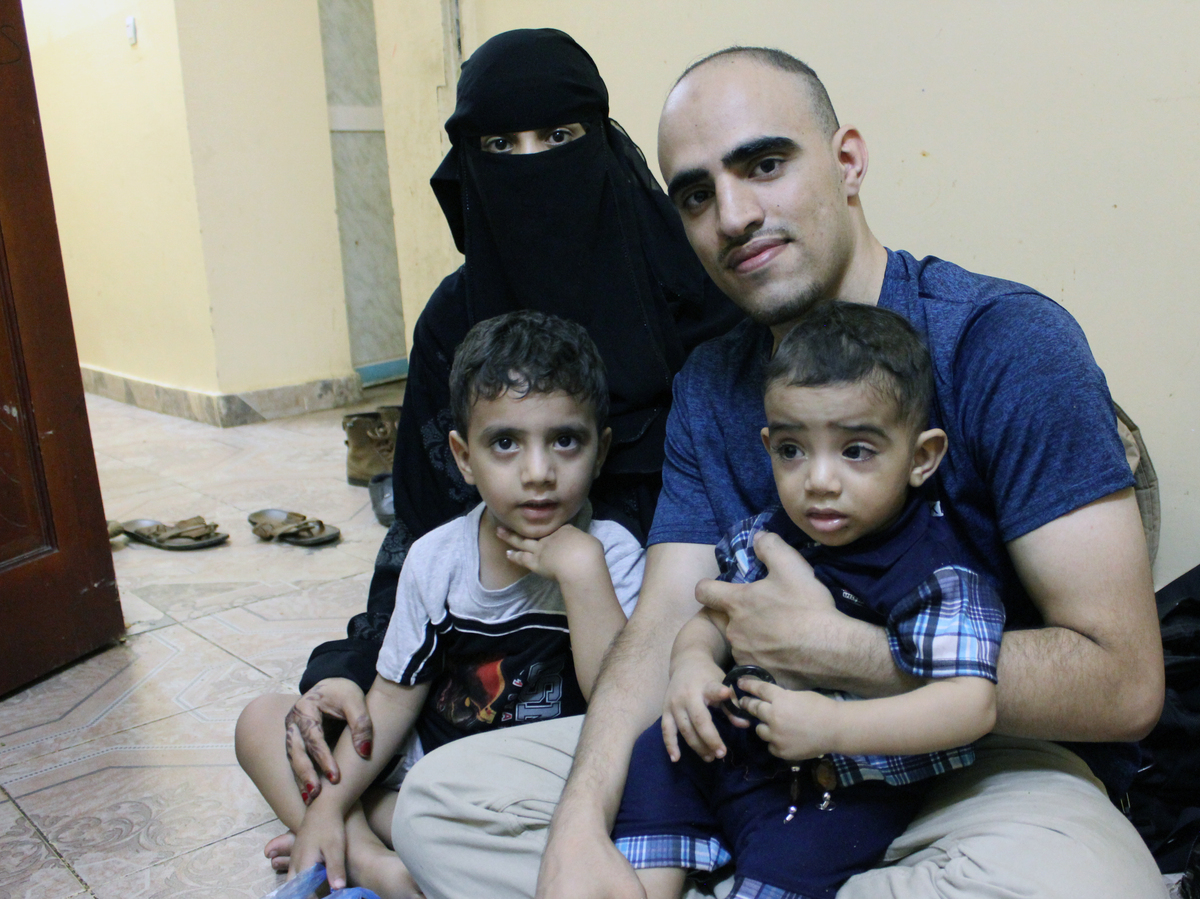 Amr Mozeb, shown here with his wife Wahdeh and their two sons at their home in Djibouti, spent his high school and college years in the U.S. and was naturalized as a teenager. His children are U.S. citizens, but his wife, a Yemeni national, has been denied a U.S. visa.

Amr Mozeb's family members are among them. He appeared from another apartment in Saba's building: a U.S. citizen who had flown in from New York, hoping to bring back his wife and two small sons.

The sons are U.S. citizens — he showed us their blue passports — but his wife's visa application was formally rejected. He showed us a paper citing Presidential Proclamation 9645, the administration's third travel ban, from December, which blocks most visitors from Yemen. "Taking into account the provisions of the proclamation, a waiver will not be granted in your case," it said.

The Center for Constitutional Rights, a nonprofit based in New York, and a team from Yale Law School met in March with nearly 50 families in Djibouti, "all U.S. citizens or their children, parents or spouses," Ibraham Qatabi, a legal worker at the center, told NPR.

Cases like Mozeb's weren't unusual, he said: "Some had already been told their visas were approved only to later be given denials pursuant to the presidential proclamation, while others were still awaiting processing and harbored little hope. In several cases we reviewed, some siblings obtained a visa while others did not, resulting in families being torn apart."

As for Mozeb, he told the officer at the U.S. consulate that his family can't stay in Djibouti. They're running out of money. He said the consular officer suggested moving them to Somaliland, which is cheaper than Djibouti. Mozeb said that's not possible.

"I can't take any more loans," Mozeb said. "I have to do something, so now I'm going back to the U.S. ... And my family — I'm still deciding whether to take them back to Yemen or go to Egypt, because over here, I can't — it's too much for me."

The family will be split and the future of his wife and sons is uncertain.

The U.S. ambassador to Yemen, Matthew Tueller, says he's heartbroken by these cases.

"This is really heartbreaking, I think, to all of us from the State Department, where we have a strong mission to facilitate legitimate travel to the United States, to facilitate family reunification, to make sure that our immigration laws both for non-immigrant visas and immigrant visas are managed in a way in accordance with law," he said.

"And our ability to do that in Yemen right now is very much hampered by the fact that we don't have that presence on the ground – an embassy to which people can come and can process travel. And of course, we, for national security reasons, put in place certain restrictions on travel that encompasses most Yemeni travelers right now. I hope that as these issues in our own system get resolved, that we'll be able to resume this mission of being able to facilitate the travel. And we've been looking at making sure that when that happens, that we have the resources so we can move very, very quickly to allow those families to travel."

At the State Department, an official told us the U.S. has granted some waivers to the travel ban.

But in Saba's flat in Djibouti, more people began appearing from more apartments. They too had children with blue U.S. passports. They too had letters from the U.S. embassy saying they'd been rejected. Some seemed to think that we, as visiting Americans, might be able to give them better news, and say the United States has not forsaken them.

There was nothing we could tell them.