Accessibility links
Why No World Power Really Wants To Topple Syria's Assad : Parallels The Syrian leader has few friends. Yet after seven years of devastating war in his country, he's in a position of relative strength and there's no realistic alternative to his continued rule. 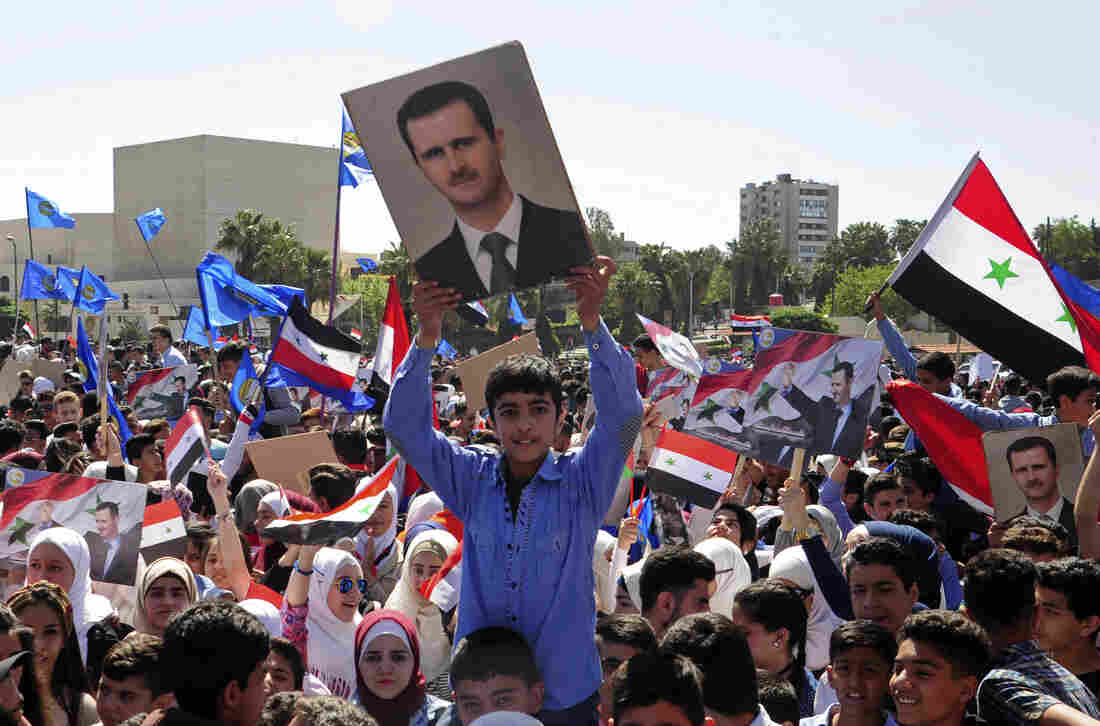 A crowd in central Damascus waves flags and portraits in support of President Bashar Assad on Monday, two days after the U.S., Britain and France carried out airstrikes. The photo was released by the official Syrian news agency SANA. AP hide caption 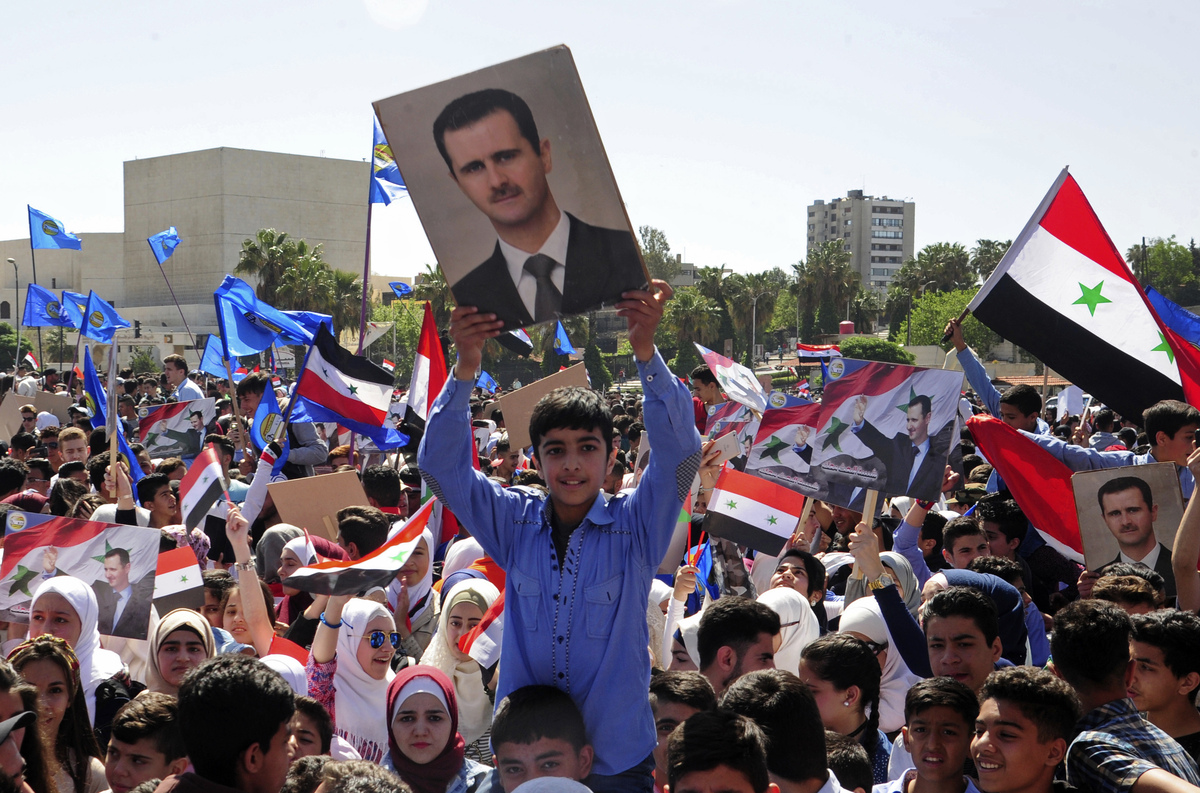 A crowd in central Damascus waves flags and portraits in support of President Bashar Assad on Monday, two days after the U.S., Britain and France carried out airstrikes. The photo was released by the official Syrian news agency SANA.

On Saturday morning, a tweet by the Syrian Presidency account showed a video of Assad walking into the presidential palace in Damascus wearing a dark suit and tie, briefcase in hand — business as usual.

By Sunday night, the White House issued a statement stressing that the U.S. would not be drawn into the wider war.

"The U.S. mission has not changed — the president has been clear that he wants U.S. forces to come home as quickly as possible," White House Press Secretary Sarah Sanders said.

This past weekend was emblematic of the way the U.S. and much of the world have dealt with Assad since Syria's devastating civil war erupted in 2011: harsh criticism and occasional action, but no sustained effort that's come close to ousting him.

"Given that the Western strikes in Syria were about chemical weapons and nothing more, it is no surprise that Syria's President Assad was reported to be in a good mood," Middle East analyst Robert Danin wrote for the Council on Foreign Relations. "Assad now has further reason to feel confident that the United States will not work to topple his regime."

Syria lies in ruins, yet Assad's security forces control most if it. The military threats to his rule are receding. Two key allies, Russia and Iran, remain determined to prop him up. Peace negotiations are going nowhere.

For a host of reasons that vary by country, the players in the Syrian war appear willing to tolerate Assad because they're unable or unwilling to force him out.

"We cannot purge the world of evil or act everywhere there is tyranny," Trump said in his televised remarks Friday. "No amount of American blood or treasure can produce lasting peace and security in the Middle East. It's a troubled place."

The U.S. has about 2,000 troops in northeastern Syria, working with Kurdish and Arab forces to control this thinly populated part of the country. The U.S. has succeeded in its goal of largely dismantling the Islamic State, but this has had the side effect of removing a major threat to Assad.

A U.S. pullout would be an additional boost to Assad, allowing him to focus even more on the rebel groups that remain in shrinking pockets around the country.

The U.S. and other opponents of Assad have always been reluctant to openly say that an Assad victory may be the least bad alternative in Syria. But through their actions, that's where the trend lines are pointing.

Israel last week carried out a missile strike on an Iranian base in eastern Syria. The Israelis say an armed Iranian drone entered Israel from that base in February. During that incident, Israel shot down the drone but lost an F-16 to Syrian anti-aircraft fire.

But in general, Israel has stayed out of the Syrian war.

Israel has long been at odds with Assad, and his father Hafez Assad before him. But the Assads have kept the border with Israel largely quiet since the Yom Kippur War of 1973. From the Israeli perspective, that stability is preferable to the risk of radical Islamist groups operating along the Israel-Syria frontier.

Israel's concern is more with Iran than Assad.

Turkey's President Recep Tayyip Erdogan applauded the U.S.-led airstrike against Syria, saying, "The innocent Syrian people should have been defended long ago."

Erdogan and others, including the U.S., began calling for Assad's ouster shortly after the war began, and Turkey has absorbed more than 3 million Syrian refugees, more than any other country.

Yet one of Turkey's biggest security concerns is the Kurdish fighters in northern Syria, along the Turkish border. Turkish troops have even entered this area to create a buffer zone. The Syrian Kurds are closely allied with the U.S. Yet Turkey regards them as terrorists and fears they are working with Turkey's own restive Kurds.

The Turkish crackdown on Kurdish fighters is effectively weakening another group that opposes Assad.

Britain and France were both willing participants in the limited strikes against Syria targeting chemical weapons facilities. European states are still dealing with the large influx of Syrian refugees and want to see the war ended, the region stabilized and the refugee issue brought under control.

But none of this has translated into an appetite for a larger, sustained military role in Syria.

Both Russia and Iran are paying substantial military, financial and diplomatic costs to support Assad.

They could apply real pressure on the Syrian leader, and if they turned on him, it could potentially change the trajectory of the war and even threaten his hold on power.

But to date, Russia and Iran have backed Assad at every turn, and appear unlikely to abandon him now that he has weathered the storm of the past seven years.

The drama surrounding the U.S.-led airstrike in Syria briefly created the impression of a change in the status quo. But it ultimately revealed yet again that Assad's opponents are only willing or able to go so far, and are not prepared to take actions that would force him out.