Accessibility links
'I Want Women To Have Rights Like Men,' Says Lawyer In Pakistan's Swat Valley : Parallels A dozen lawyers are helping other women in the Swat Valley with divorce, custody and inheritance cases. Some of the women lawyers defied the Taliban to study law and continue to endure threats. 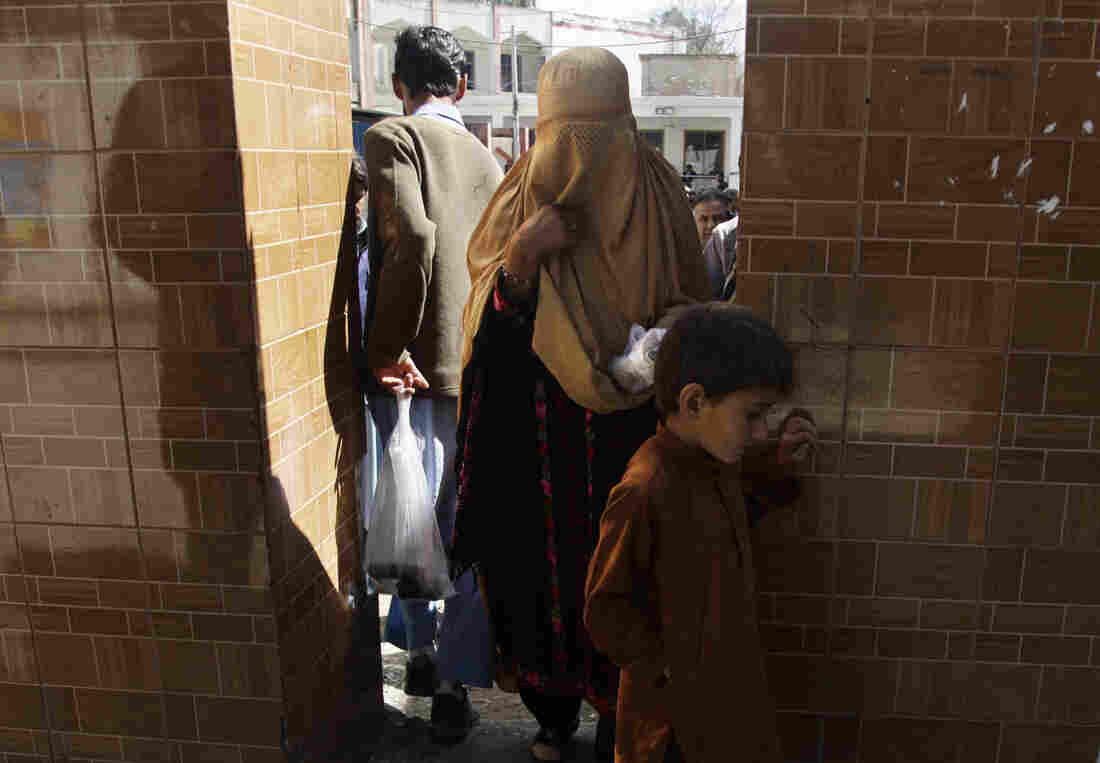 Noorshad Begum, seeking legal help, walks through the gate of the court complex with her son. "My husband married another woman," she says. "He abandoned me. I have five children. He doesn't bother to ask about us." Diaa Hadid/NPR hide caption 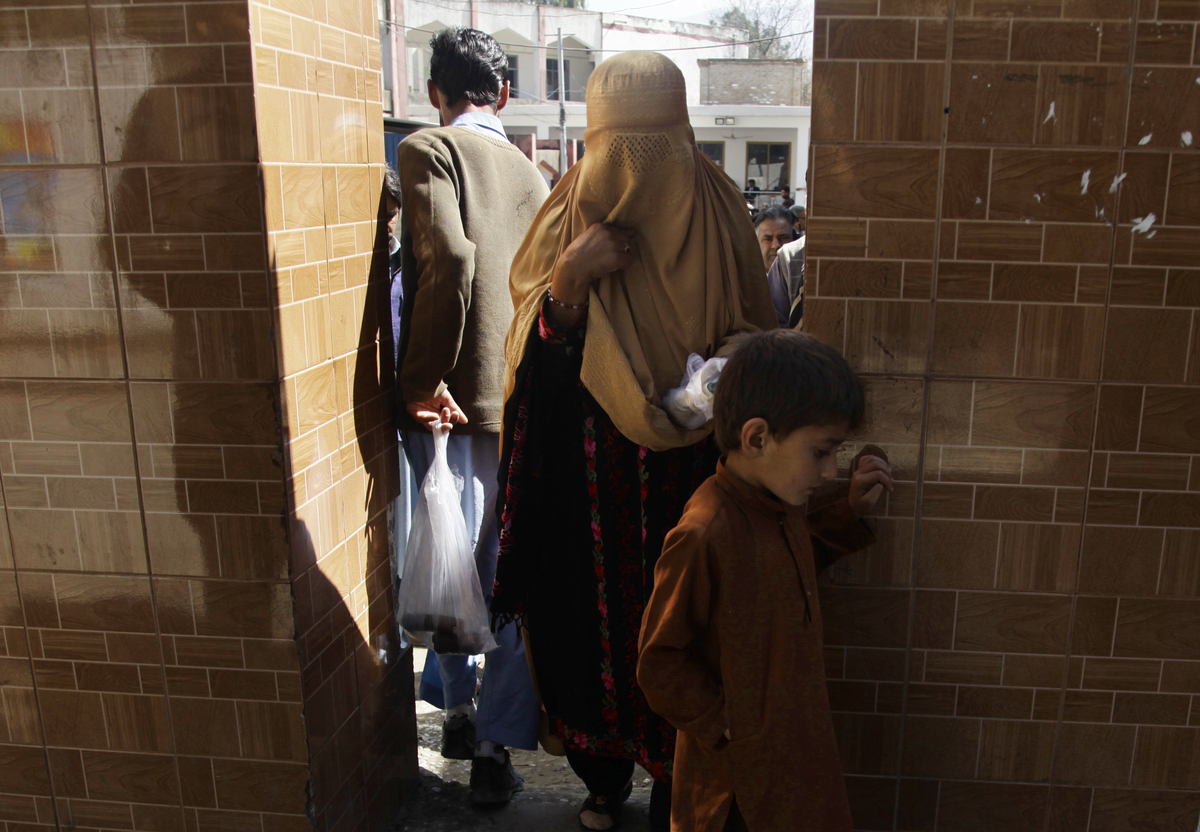 Noorshad Begum, seeking legal help, walks through the gate of the court complex with her son. "My husband married another woman," she says. "He abandoned me. I have five children. He doesn't bother to ask about us."

The woman in the brown burqa stood at the gate of court complex as men in suits shouldered past. With one hand, she clutched her son, and in the other, a piece of paper scrawled with a name.

The district police officer gave it to her when she complained about her husband's abuse. He told her to present it at the entrance of the sprawling court administration that serves the Swat Valley. Noorshad Begum couldn't read it, being illiterate.

She handed it to a court guard.

He immediately strode toward the woman whose name was scrawled on the slip: Mehnaz. She was easily identifiable — the only female lawyer there on a recent spring day, wearing a a black lawyer's robe over her long white outfit, her hair covered by a headscarf and face by a veil.

"I often fight cases free of cost for poor people," said Mehnaz, who, like many Pakistanis, goes by one name. "This woman can't afford to pay for a lawyer," she said, flipping through referral documents Noorshad Begum kept in a plastic bag.

"My husband married another woman," Noorshad Begum explained. "He abandoned me. I have five children. He doesn't bother to ask about us."

The final straw: he took the dowry money she'd saved for their daughter's marriage. 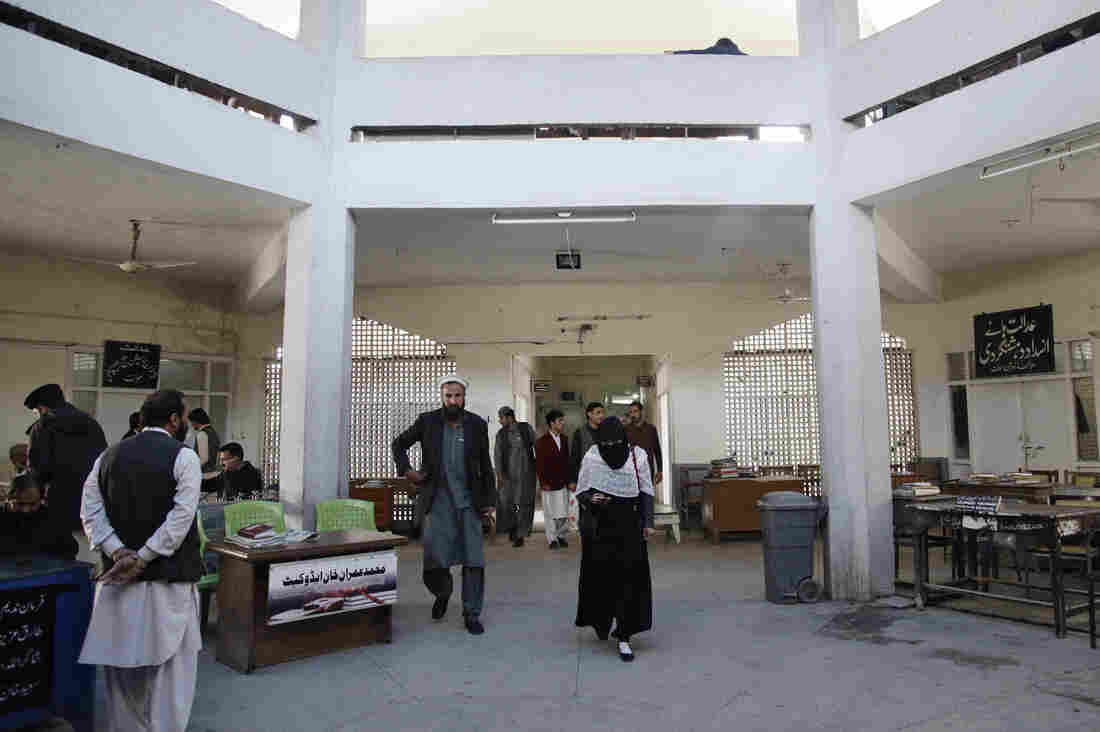 Mehnaz (center) is one of 12 female lawyers in an administrative district with 700,000 people. There are about 500 male lawyers in the district. Diaa Hadid/NPR hide caption 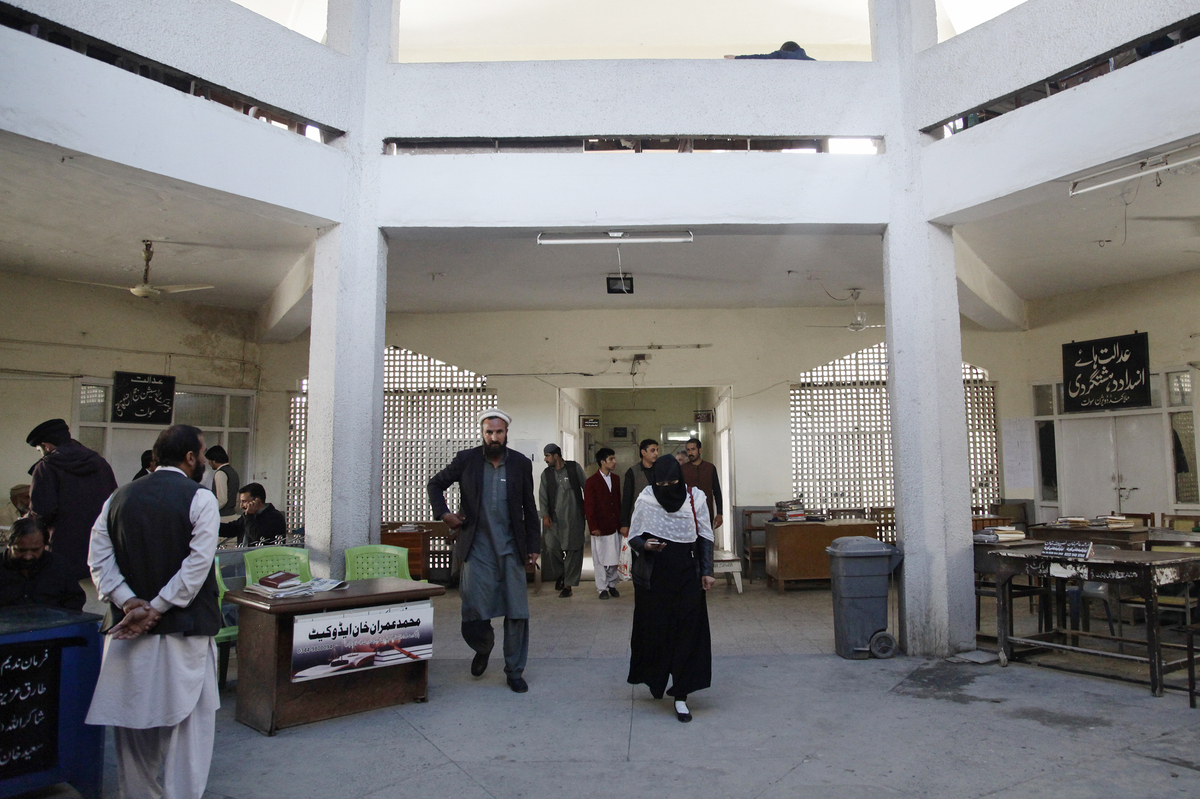 "She wants justice and her rights," said Mehnaz, summarizing the woman's case. Then, summarizing her life's desire, she said: "I want women to have rights like men."

Minutes later, the guard stopped Mehnaz again — to direct her to a nearby room, where another woman sat with a baby. She appeared to have recently been crying and spoke to Mehnaz in confidence.

Mehnaz and other women lawyers do what they can, helping women to obtain divorces, custody of children and inheritance. In the seven years since she's been practicing law, Mehnaz estimates that she's helped hundreds of women in the Swat Valley, offering free legal counsel to some and representing others. She handles cases for male clients as well.

The Pakistani Taliban ruled here a decade ago, imposing their harsh interpretation of Islamic law. The military pushed them out in 2009 and the government mostly resumed control.

But many women lead cloistered lives, regardless of who is in power. They are rarely seen on the grubby streets of Mingora, Swat's main city. When they do appear, they are draped in scarves that cover their hair and much of their faces. Other women don burqas. Few women work outside the home.

Mehnaz is one of 12 female lawyers in this administrative district within Swat that numbers 700,000 people, according to Gohar Ali Khan, a senior advocate based in Mingora. Khan said there were about 500 male lawyers.

As a teenager, Mehnaz saw her male relatives cheat their sisters out of their inheritance of land – a key asset in the fertile Swat River plain. Traditionally, Swat's women do not inherit, even though under Pakistani law, they are entitled to half the amount that their male siblings would receive. 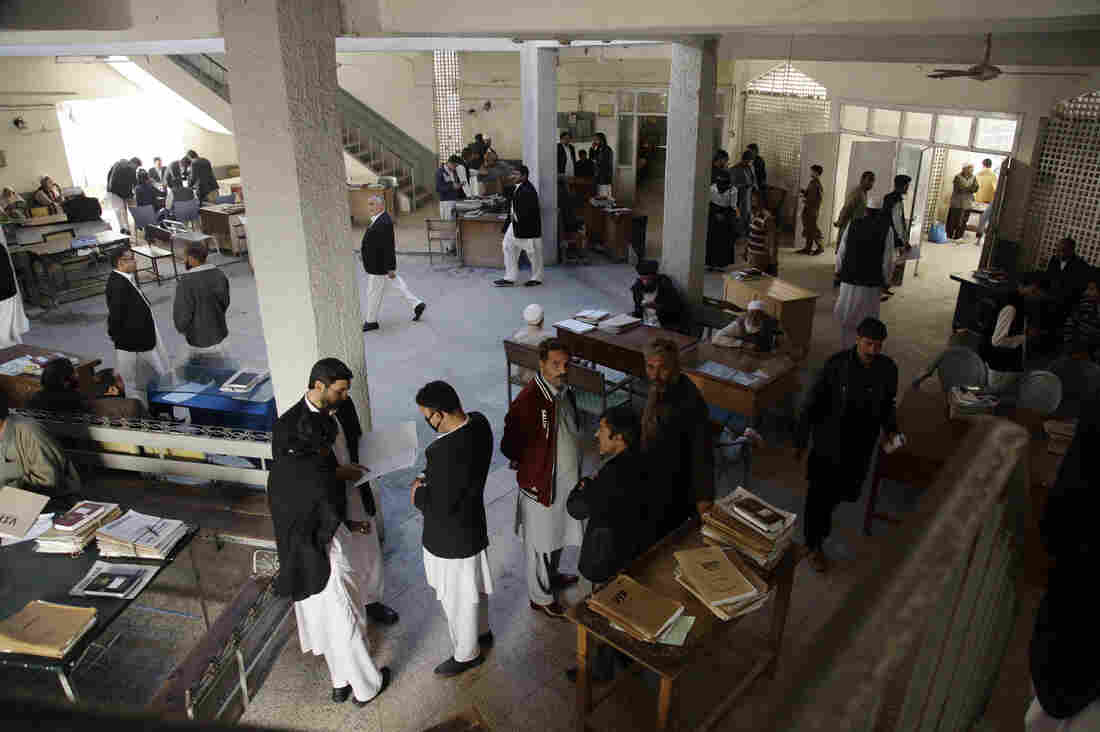 Mehnaz (lower left, back to camera) confers with colleagues at the court. On her first day at work in 2011, she recalls, people exchanged glances as she entered the court complex in her black lawyer's robe. "People found it strange," she said. "They'd say, 'Why has she joined a male profession?' " Diaa Hadid/NPR hide caption

Mehnaz recalled her male relatives saying to their sisters: "Our parents died in our house. There's nothing for you." She said those women were poor and that inheritance could have helped them.

"When I saw that women weren't given their rights," she says, "I decided I would be a lawyer. I'd help them get justice."

Her father, a schoolteacher, told her to forget it. He wanted her to be a teacher like him — it was a respectable job for women. Lawyering was for men, she recalled him saying. Mehnaz fought back. It was the first of many battles. Her mother sided with her. Eventually, her father relented.

Then the Taliban took over her village of Matta in 2007 and burned down the girls' schools months later. Mehnaz had already finished high school, but Taliban insurgents were also attacking women who tried to commute to study in other areas. So Mehnaz moved to her aunt's house in Mingora, Swat's main town. It hadn't yet fallen to Taliban control and there was a coed institution, the Muslim Law College.

But clashes between the Pakistani army and the Taliban in 2009 upturned her studies again.

"I did my exams under very difficult circumstances," she recalled. "There was curfew, clashes," she said, "and I was afraid of the Taliban, too, that they might kill me for getting an education."

Mehnaz says at the time, the Taliban even threatened her parents.

By then, her father was her biggest cheerleader. He counseled her to not think of the threats: just focus on exams.

She did. And two years later, in 2011, Mehnaz began practicing as a lawyer. On her first day, she recalled, people exchanged glances as she entered the court complex in her black lawyer's robe.

"People found it strange," she said. "They'd say, 'Why has she joined a male profession?' "

Mehnaz said she decided to make a point of sitting in the large, shady courtyard reserved for lawyers.

"There were no girls at all!" she said with a laugh. "It was very difficult to sit here." Other lawyers stared at her; she says they made her feel out of place. But she tried as much as she could to ignore this and keep working. She felt she was fighting two battles — one on behalf of her clients in the courts and the other, to be taken seriously by the court administration.

On a recent day, Mehnaz was again the only woman in the courtyard, but her male colleagues greeted her with respectful salaams. "Now, thank God, things are better," she said. 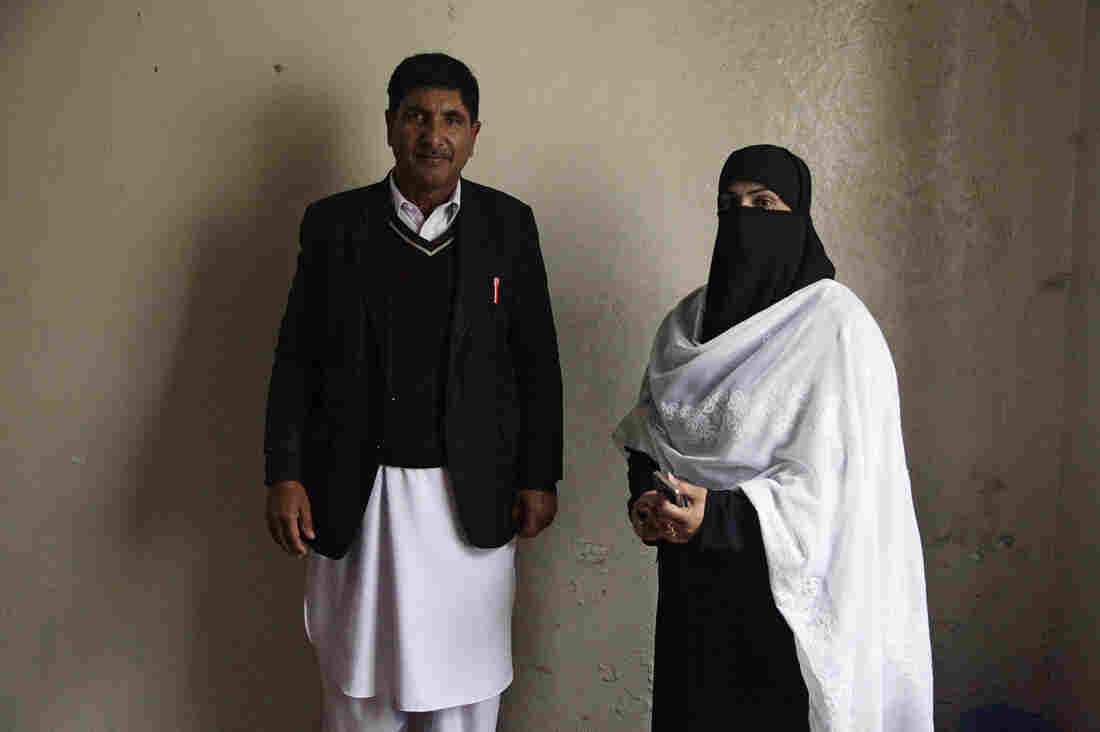 Gohar Ali Khan (left), a senior lawyer, stands with his junior partner, Humaira Shaukat. She and other female lawyers began working here after the Taliban were pushed out by the Pakistani army in 2009. They defied the Taliban to study law. Diaa Hadid/NPR hide caption

Although the Taliban weren't in power after the army took control of the Swat Valley, extremists still threatened women trying to work and girls getting an education. Malala Yousafzai was shot in the head by a Taliban gunman as she returned home from school in 2012.

During the same year, Taliban insurgents kidnapped the father of female lawyer Humaira Shaukat – to pressure her to quit her profession, Shaukat said. Although he was released after a month, the threats against her and her father have continued, she said – but she declined to provide further detail, saying it could put her in danger.

Since deciding to study law, Shaukat said: "I've walked about with a shroud wrapped around my head."

Also in 2012, as Taliban threats continued against women who worked and girls pursuing an education, Mehnaz said threats resumed against her own father.

"He was threatened through letters. Mobile phones. Sometimes through the post," she said.

Her father kept it secret from her, not wanting her to worry. But her siblings told her, fearing that she, too, might be in danger. "They were terrible years for me," she said. "It was risky. But I didn't lose courage."

These days, Mehnaz says she doesn't get threatened by the Taliban. But she recently joined a movement demanding rights for her ethnic minority, the Pashtuns. The movement emerged in January, and activists have been subject to arrest and disappearance.

Days after Mehnaz was interviewed by NPR, she sent a photograph of herself at a small protest. She was holding a sign saying, "We are demanding rights according to the constitution." She was the only woman, and she stood in the front row.