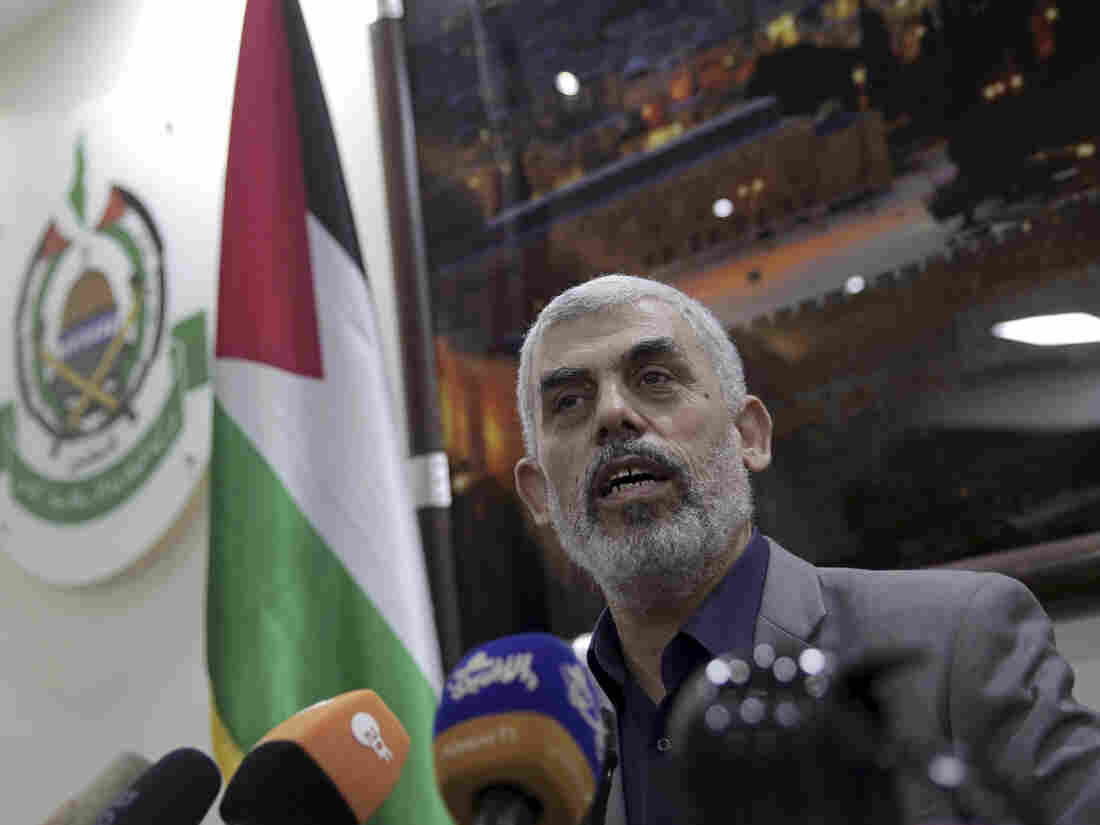 Yehiyeh Sinwar, the Hamas militant group's leader in the Gaza Strip, speaks to foreign correspondents in his office in Gaza City on Thursday. "What's the problem with hundreds of thousands breaking through?" he said. The border fence, he said, was not a "sacred cow." Khalil Hamra/AP hide caption 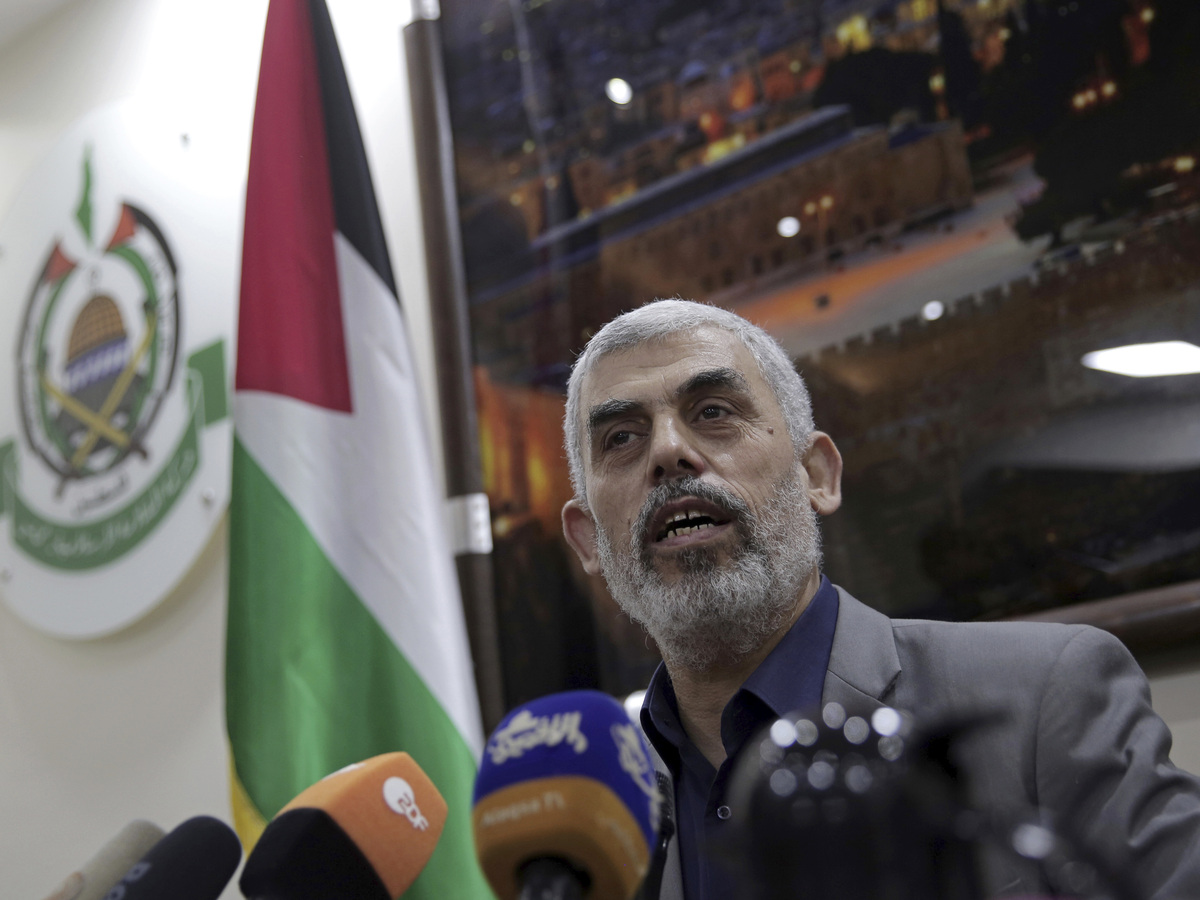 Yehiyeh Sinwar, the Hamas militant group's leader in the Gaza Strip, speaks to foreign correspondents in his office in Gaza City on Thursday. "What's the problem with hundreds of thousands breaking through?" he said. The border fence, he said, was not a "sacred cow."

He served behind bars in Israel for two decades. He was a shadowy figure in the military wing of the Islamist group Hamas.

Now Yehiyeh Sinwar is head of the group's Gaza branch. He spoke with members of the international press corps for the first time on Thursday.

"I usually don't talk to the media," he said.

But he called it a "critical" time before the culmination of weeks of deadly Palestinian protests on the Israeli border. The biggest protests are scheduled for May 14 and 15, coinciding with both the opening of the new U.S. Embassy to Israel in Jerusalem and the "nakba," the Palestinian national day of mourning surrounding losses in the 1948 war that led to Israel's founding.

The United States and Israel consider Hamas a terrorist group, and the U.S. has designated Sinwar a terrorist as a founder of Hamas' militant wing, which remains active in Gaza. He has served as head of the Gaza branch since early 2017.

Israeli officials have described Sinwar as a steely, hard-line militant.

Kobi Michael, a former head of the Palestinian Desk at Israel's Ministry for Strategic Affairs, said in 2017 that Sinwar represents "one of the most radical and extreme lines of Hamas" and is focused on building up the group's military capabilities.

"The idea that he was elected is a very dangerous and concerning indication of the destabilization of the region," Michael said.

The gray-haired Sinwar, who was born in 1962, appeared relaxed and confident in his two-hour meeting with international journalists at his Gaza City office, wearing a charcoal-gray jacket and open-collar shirt and sitting behind a table decorated with flower bouquets and attractive tissue boxes. 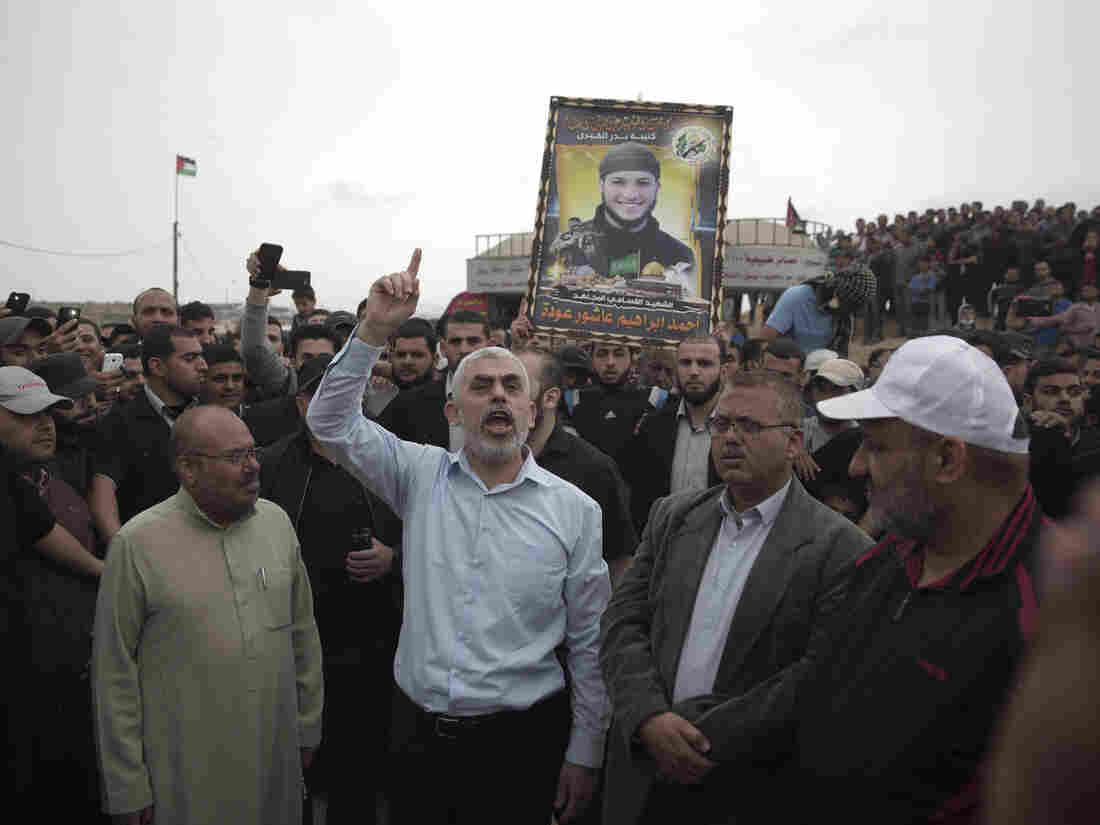 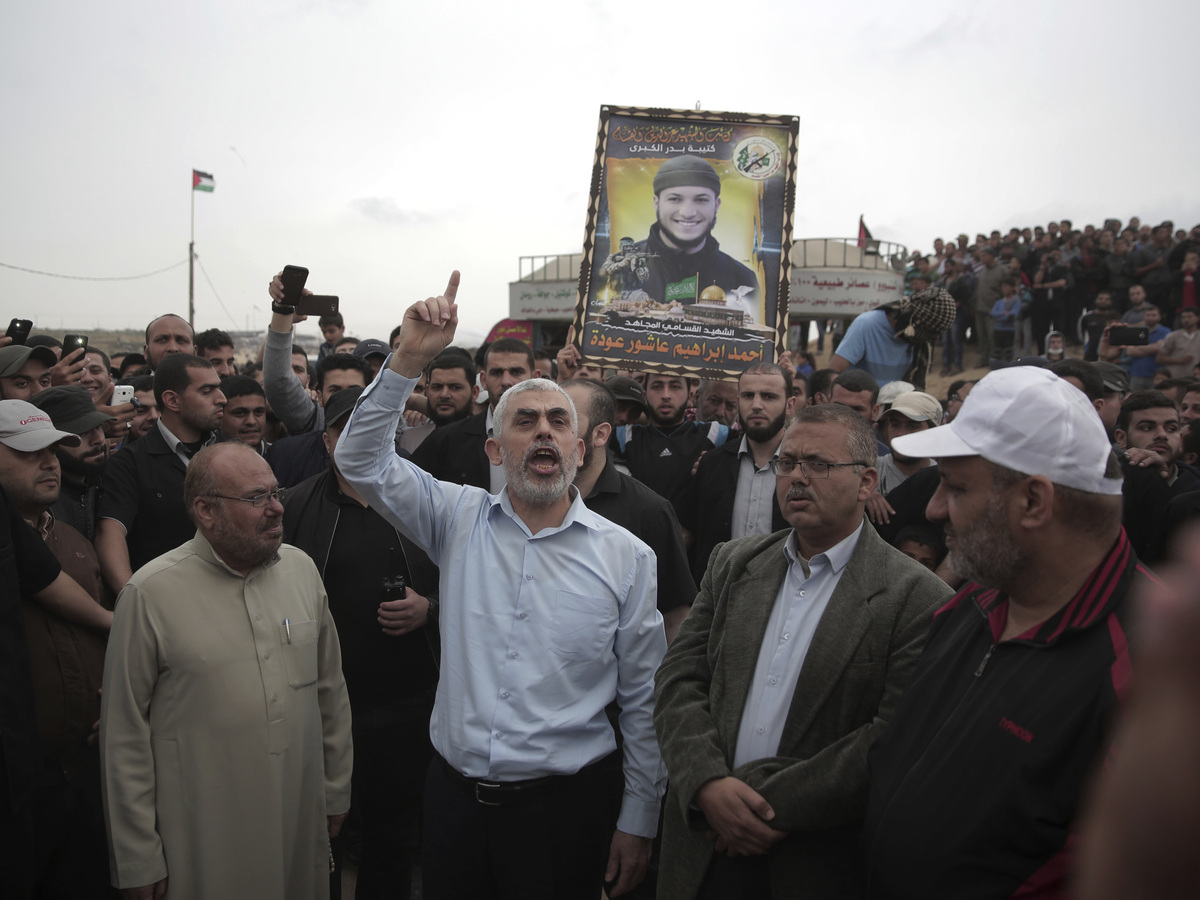 Hamas leader Yehiyeh Sinwar speaks with protesters at the Gaza Strip on April 20.

His group has helped fuel weeks of protests at the Israeli border that have captured international attention, as Israeli troops have killed dozens of Palestinians and wounded several thousand, according to Palestinian officials.

Israel has been accused of excessive force, but the country defends its response, saying it shoots those Palestinians who pose a danger or try to breach the border fence and cross into Israel.

Crossing into Israel is exactly what Sinwar suggested he would support Palestinians doing on May 14 and 15, the final planned days of protest.

"What's the problem with hundreds of thousands breaking through?" he asked. The border fence, he said, was not a "sacred cow."

It is a dangerous prospect; Israel has vowed to shoot anyone trying to cross into the country.

The stated aim of the Palestinian protests — billed as the "Great March of Return" — is for Palestinians to return en masse to lands lost to Israel 70 years ago, when the country was founded.

It is a prospect many might call a pipe dream, and one Sinwar himself did not dwell on. He struck a pragmatic tone, saying the protests would refocus international attention on Gaza and were aimed at pressuring Israel to relax a blockade on the territory, which has crippled its economy and severely restricted movement in and out. Israel and Egypt have blockaded the territory for 11 years, since Hamas came to power in Gaza.

He said his two decades — half his lifetime — behind bars in Israel taught him a lesson: Such protests work.

When he waged a 20-day hunger strike in an Israeli prison, it led officials to give him pens and notebooks, he said. He compared Gaza to a large prison, and said Palestinians would protest for better conditions.

"We won't accept the walls of this prison," he said. "I don't think any of you would accept such a life."

It appears the tactic is succeeding to a certain extent. Though Hamas is isolated by the West, international envoys and mediators have spoken with its leaders in recent weeks, seeking to deescalate tensions, Sinwar said. He named-dropped Nickolay E. Mladenov, the U.N. Special Coordinator for the Middle East Peace Process.

"I told Mladenov: there is a hungry tiger blockaded for 11 years. Now this tiger is out of its cage. No one knows where that tiger is heading," Sinwar said.

A day earlier, Sinwar reportedly told a gathering of Gaza youths that Hamas had rejected international proposals to stop the border protests.

Tareq Baconi, an expert on Hamas and the author of Hamas Contained: The Rise and Pacification of Palestinian Resistance, said Sinwar was akin to a hawk from Israeli Prime Minister Benjamin Netanyahu's ruling Likud Party, and could deliver on any deal struck with Israel, Hamas' archenemy.

"He has a very strong ideology, firm convictions, strong beliefs about what a deal must entail, while also having a sense of what is practical," Baconi said. "He has the most political and military clout in the organization. So if a deal is on the table, he is absolutely the leader who would be able to push Hamas into major concessions, after driving a very hard bargain."

In separate comments at Thursday's press conference, Sinwar publicly addressed the fate of two Israelis believed to be held captive by Hamas in Gaza for several years — the highest-ranking Hamas official to do so. Israel says they are civilians who crossed into Gaza and have mental health conditions. Hamas media has referred to them as soldiers.

Sinwar said the 6,000 Palestinian prisoners currently in Israeli jails could only be freed through a prisoner exchange, such as the one Hamas negotiated that led to his release from prison in 2011 in exchange for a captured Israeli soldier in Hamas custody.

"Because of that, we keep this case totally classified," Sinwar said. "I can assure you, any captive soldier has full access to their rights, considering the complicated security situation."