Accessibility links
Almost 7,000 Candidates Are Running For Election This Weekend In Iraq : Parallels Parliamentary elections this weekend will be the most complicated in Iraq's post-war history. Many people say they won't vote. "I voted three times, but nothing changed," says an unemployed man. 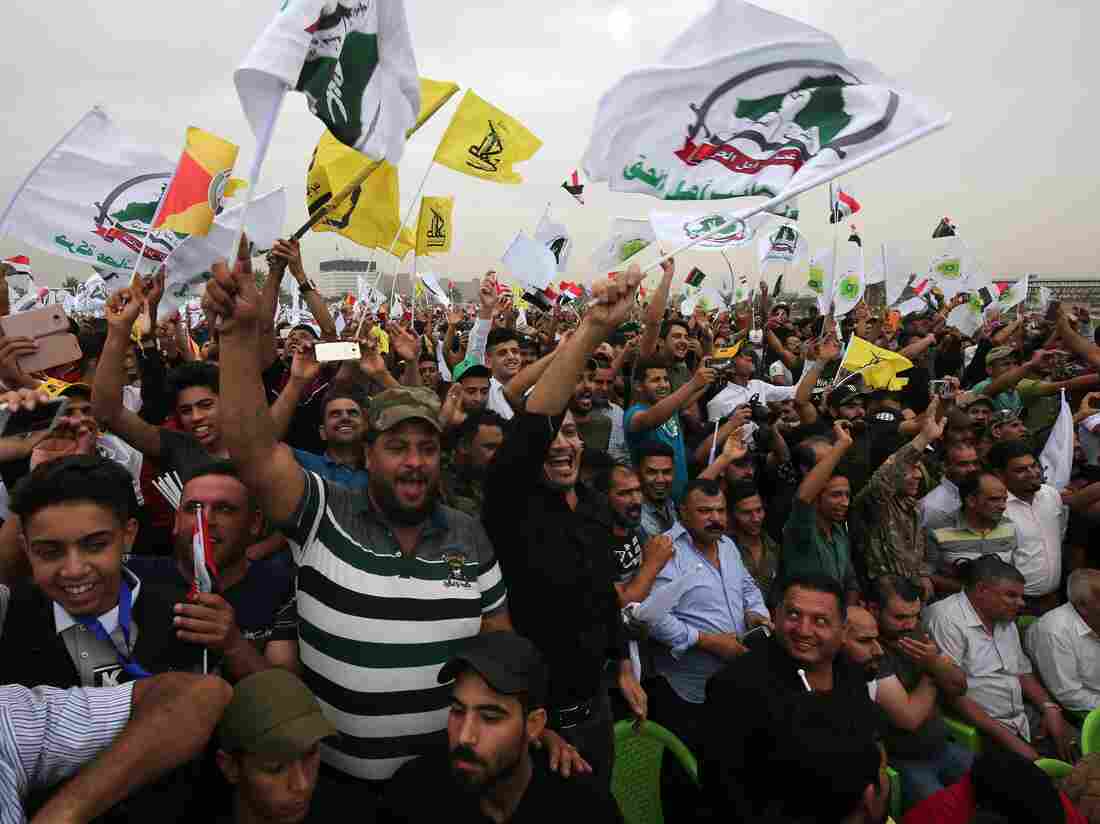 Iraqis wave flags at a campaign rally for the Fateh Alliance, a coalition that includes Iranian-supported paramilitaries, in Baghdad on May 7. Ahmad Al-Rubaye/AFP/Getty Images hide caption 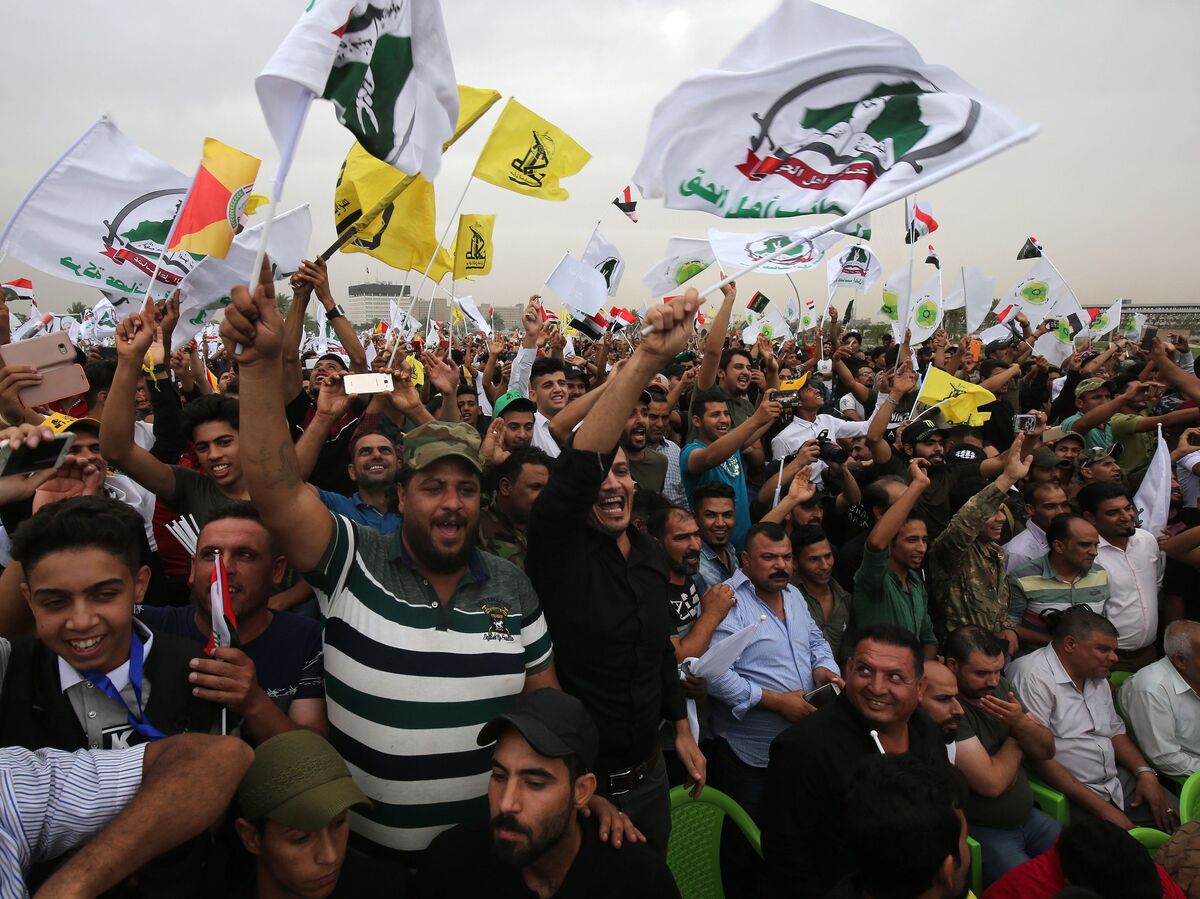 Iraqis wave flags at a campaign rally for the Fateh Alliance, a coalition that includes Iranian-supported paramilitaries, in Baghdad on May 7.

In Baghdad's Qishla square, where the British crowned Iraq's first king almost a century ago, a young paramilitary fighter in a camouflage tent shows off a tabletop model of Iraq's recent battles against ISIS.

"We wanted to show people where the battles were in their country and how we liberated these areas from the terrorist ISIS," says Neuman Ibrahim. At 20, the slight young man is a veteran fighter with the Iranian-backed Asaib Ahel al-Haq militia.

Ibrahim is part of Iraq's Popular Mobilization Forces (PMF), an umbrella group of mostly of Shiite militias that answered a religious call to fight ISIS four years ago. They are now nominally under command of the Iraqi government and are one of the factors that make Iraq's parliamentary elections on Saturday — the fourth since a U.S.-led invasion toppled Saddam Hussein in 2003 — the most complicated in the country's post-war history.

"God willing, everyone will vote, because we need to try to change the government," says Ibrahim. "We will see whether it will be good for us or not."

Much has changed since Iraq's last election, which took place four years ago. ISIS is mostly gone, and security has improved immensely. But past governments and a history of mismanagement and rampant corruption have left their mark.

This year, the field is crowded with almost 7,000 candidates — including a former prime minister, a paramilitary leader and more women than ever before — running for 329 seats throughout Iraq's 19 provinces. The election features the biggest number of parties and coalitions since 2003, according to analysts. They range from Islamic religious parties to Communists. The large number is partly a result of increased rivalry among Iraq's dominant Shiite parties.

While Prime Minister Haider al-Abadi is expected to win enough votes to form a government, he faces strong competition from a Shiite former militia leader, Hadi al-Amiri. Former Prime Minister Nouri al-Maliki, who is from the same Shiite Dawa party as Abadi, is also running against the current prime minister. 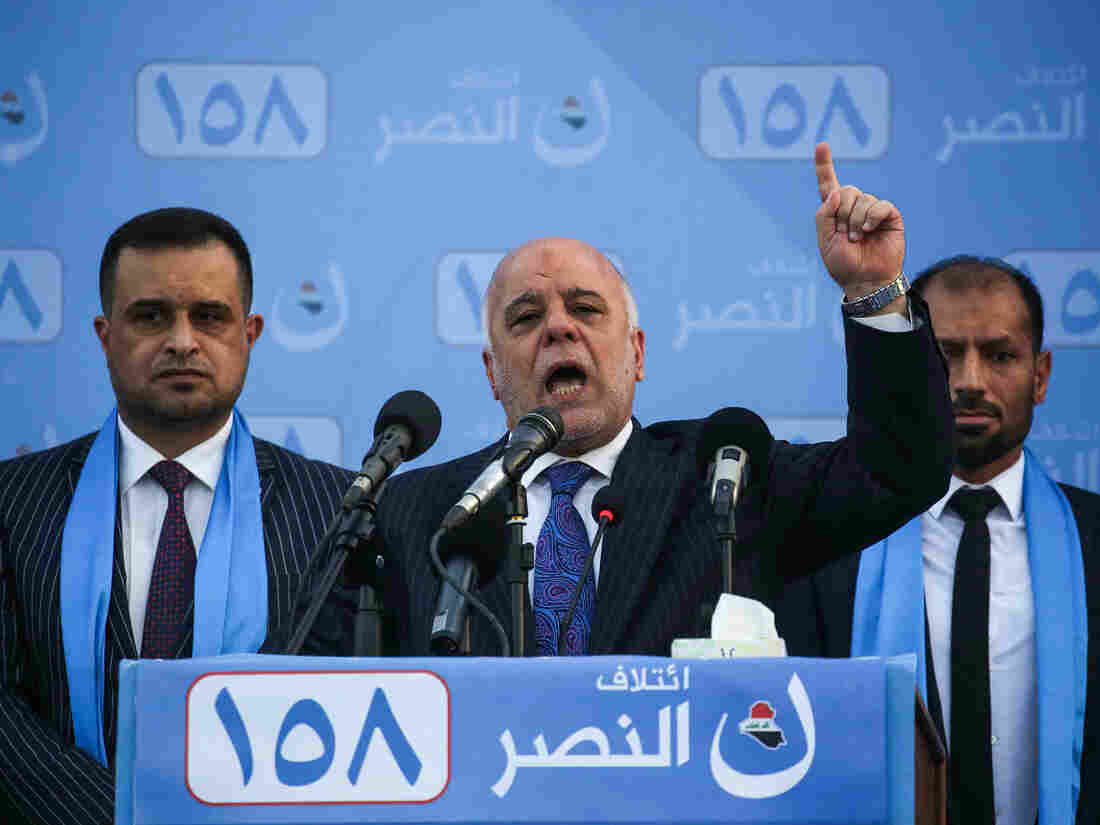 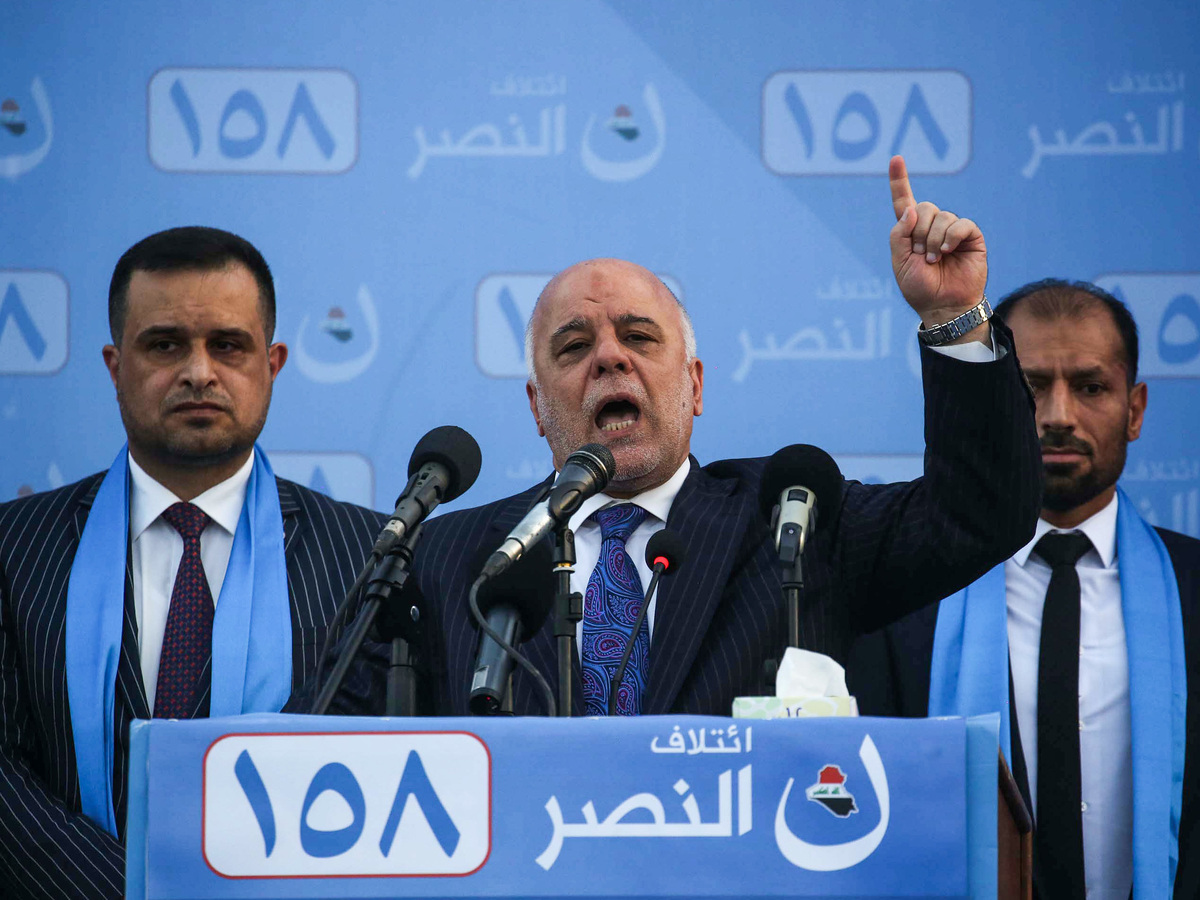 Iraqi Prime Minister Haider al-Abadi speaks at a campaign rally in Karbala on May 4.

But almost a million eligible voters are still displaced by the battle against ISIS, most of them in Sunni areas — and it's unclear how many will be able to cast their ballots. With the loss of Kurdish territory to Iraqi government forces, this election will also mark a diminished Kurdish presence in parliament.

At its height, ISIS controlled one-third of Iraqi territory. Now it controls less than 2 percent. The militias that stepped in when Iraqi army divisions collapsed are now under the nominal command of the Iraqi government and are an integral part of politics. Many have bypassed a ban on paramilitary forces fielding election candidates by creating separate political wings.

Under a system established while the U.S. was in charge, Iraq's prime minister is from the Shiite majority, the parliament speaker is Sunni and the president, who holds a largely ceremonial position, is Kurdish. All three positions will be determined indirectly by Saturday's elections. 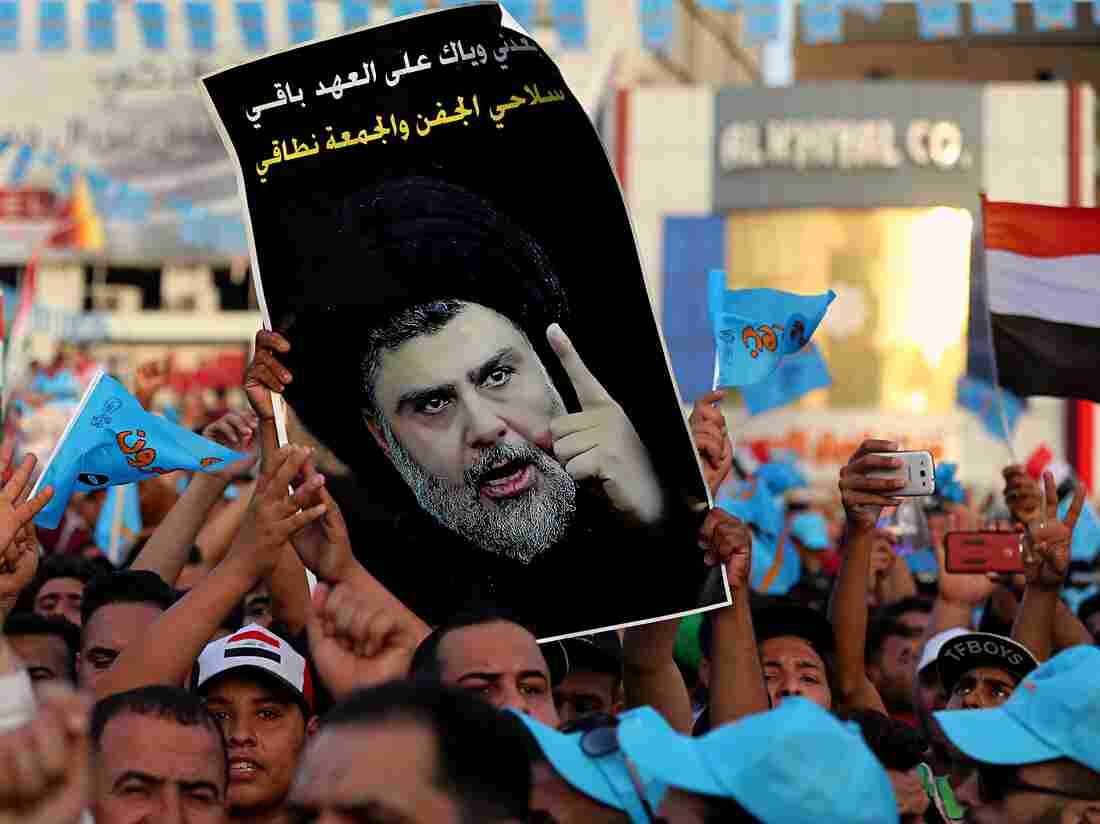 Followers of Shiite cleric Muqtada al-Sadr, seen in the poster, take part in a campaign rally in Baghdad's Tahrir Square on May 4. Karim Kadim/AP hide caption 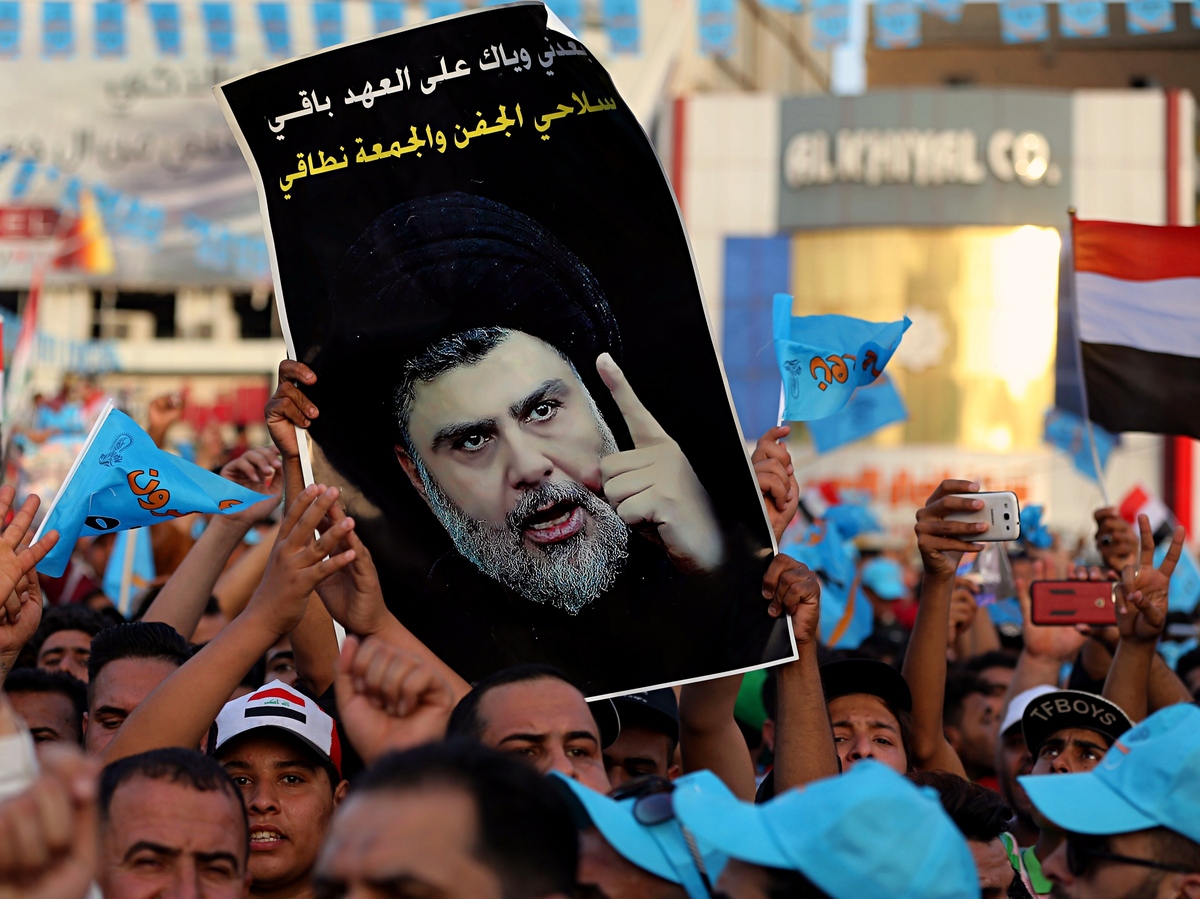 Followers of Shiite cleric Muqtada al-Sadr, seen in the poster, take part in a campaign rally in Baghdad's Tahrir Square on May 4.

Amiri, the strongest rival to Abadi's bid for re-election as prime minister, is the head of the PMF. He returned to Iraq in 2003 after spending 20 years in exile in Iran, launching attacks on Saddam Hussein's forces. His close ties to Iran were evident during Iraq's recent fight against ISIS, when he was often seen on Iraqi battlefields with Iran's Islamic Revolutionary Guard commander Qassim Soleimani.

A skilled politician and former Iraqi transport minister, Amiri has seen his political fortunes buoyed by victories on the battlefield. But driving out ISIS has come at a huge cost. He says 7,000 PMF fighters were killed fighting ISIS. Thousands of regular Iraqi security forces also lost their lives in three years of bitter fighting, after ISIS fighters took control of Iraqi cities in north and central Iraq in 2014.

"They want to see the state moving on from war"

A British-educated engineer who's viewed as a moderate, Abadi is also campaigning on the country's victory over ISIS. But he is seen as having more appeal to Iraq's Sunni Muslims than Amiri.

He has also, unusually, campaigned in the Kurdistan region of Iraq, emphasizing his government's achievement in defeating ISIS and his promise to reconstruct the country. 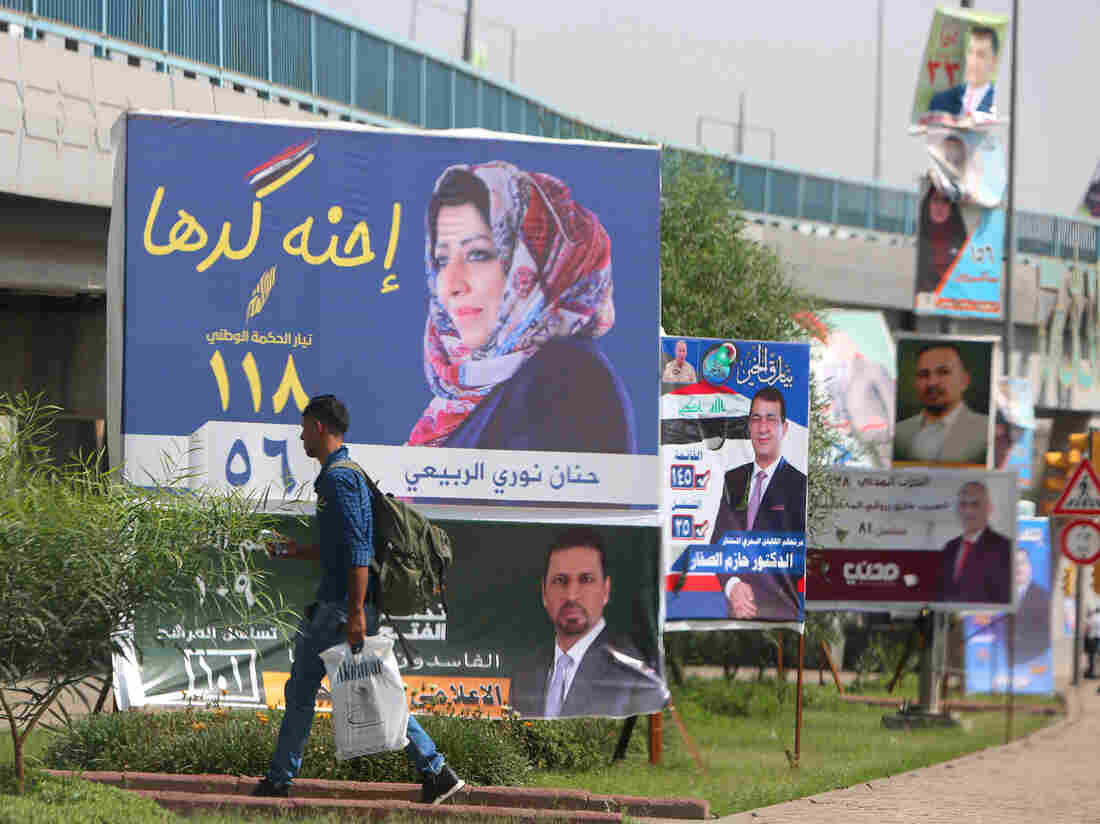 "We are up to it," says the slogan on parliamentary candidate Hanan Nouri al-Rubaye's billboard in Baghdad. Some 40 percent of candidates in Saturday's elections are women. Sabah Arar/AFP/Getty Images hide caption 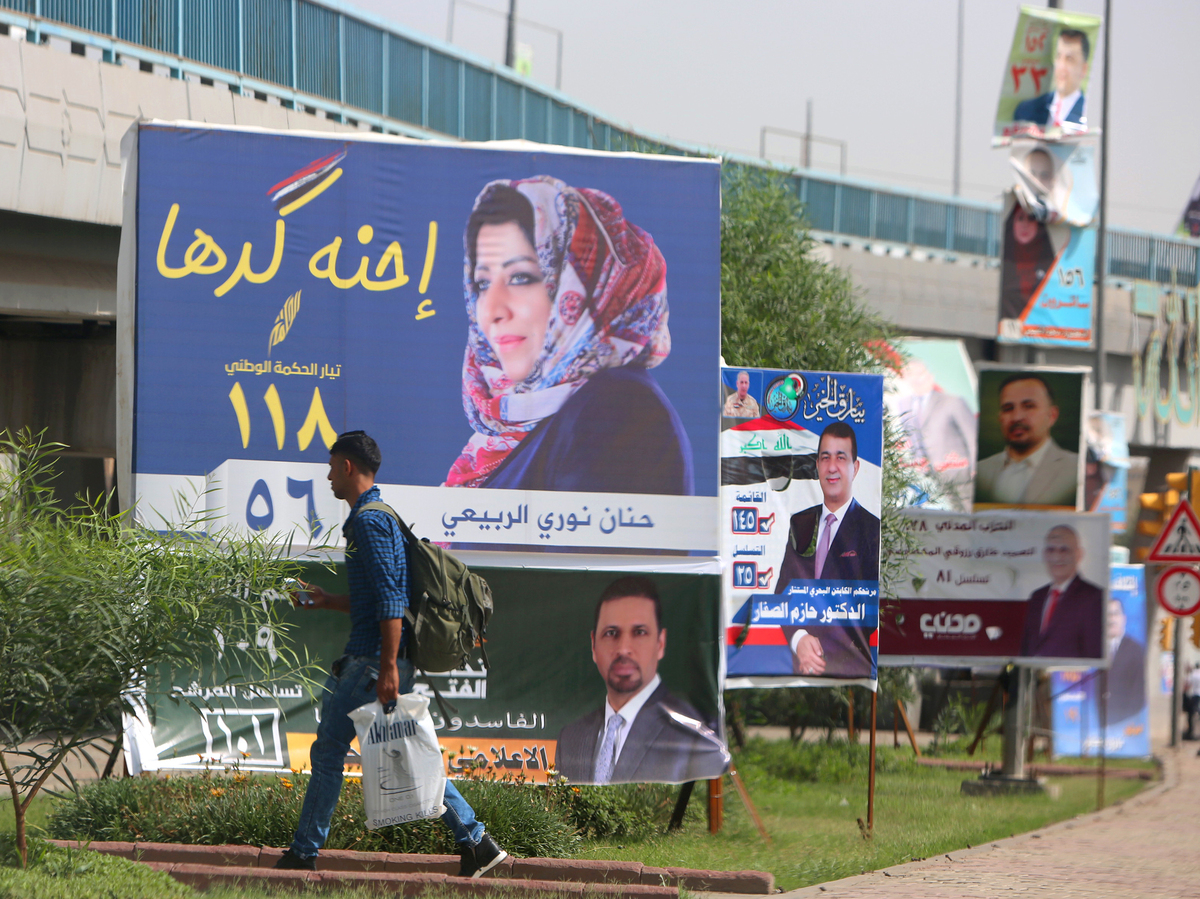 "We are up to it," says the slogan on parliamentary candidate Hanan Nouri al-Rubaye's billboard in Baghdad. Some 40 percent of candidates in Saturday's elections are women.

"Abadi thinks that he can be successful across the country to some extent," says a senior U.S. official, speaking on condition of anonymity to be able to discuss Iraqi politics. "One thing that we see consistently is that Prime Minister Abadi has a more balanced degree of support across all regions and across ethnic and sectarian and religious groups."

At a campaign rally last week in a stadium in the Baghdad neighborhood of Sadr City, Abadi took the stage as a flock of doves and blue balloons were released in the air. Young men cheered as he raised his hands in a victory salute.

The turnout was small. Sadr City bears the name of the revered family of Abadi's political rival Muqtada al-Sadr, a Shiite cleric venerated by millions, and forms the urban base of Sadr's support.

Sadr's militia fought U.S. forces after the 2003 invasion, but he disbanded his political wing for these elections and threw his support behind an unlikely alliance of secularists and Communists. 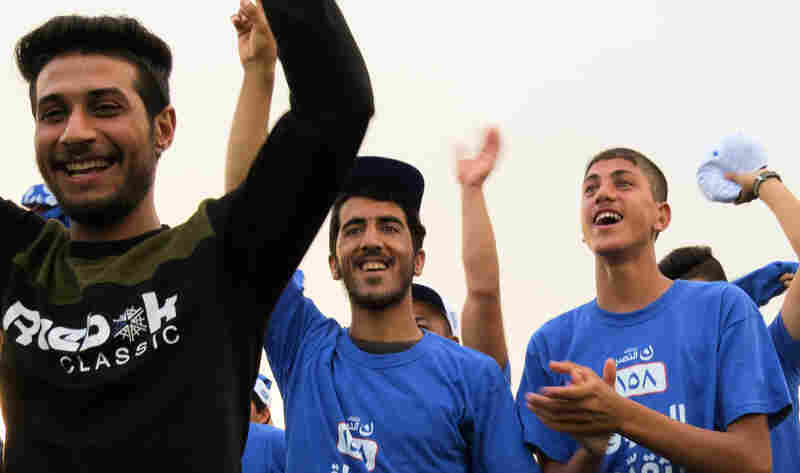 Sadr, who does not take a direct role in politics, has directed his followers to cast votes for technocrats, based on their credentials, and not on the basis of religion.

"Going forward, I think the most important thing for Iraqis is they want to see the state moving on from war," says Sajad Jiyad, director of the Al-Bayan Center for Planning and Studies, a think tank in Baghdad. "That means a focus on services, a focus on job creation, paying attention to the 60 percent of Iraq's population who are now under 30 years old who really care about the future, not the past."

With ISIS diminished and the sectarian war that tore the country apart now a decade in the past, economic worries have surpassed fears of sectarian violence for the first time in the minds of many voters.

Iraq has some of the world's biggest oil reserves, but according to its planning minister, 30 percent of Iraqis are considered to be under the poverty line. Twenty percent of workers under 30 are officially unemployed, although the actual number is believed to be higher.

Hussein Salem, clutching a folder of documents as he desperately fought the crowd to try to reach Abadi's aides at the Sadr City rally, hoped Abadi could help him. 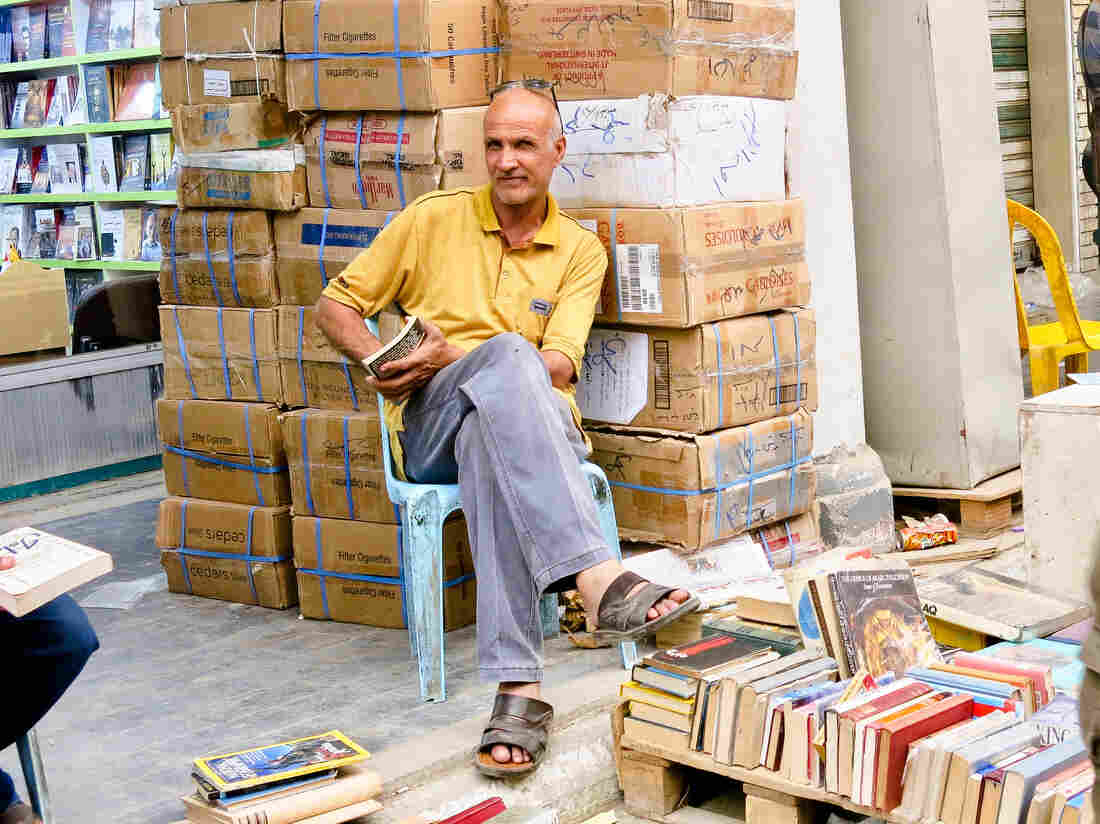 Shalan Zeidan sits next to his books for sale. He has been selling books on al-Mutanabi street for 20 years. He says Iraq has no real government and he won't vote. "They are tribes. We are ruled by tribes." Jane Arraf/NPR hide caption 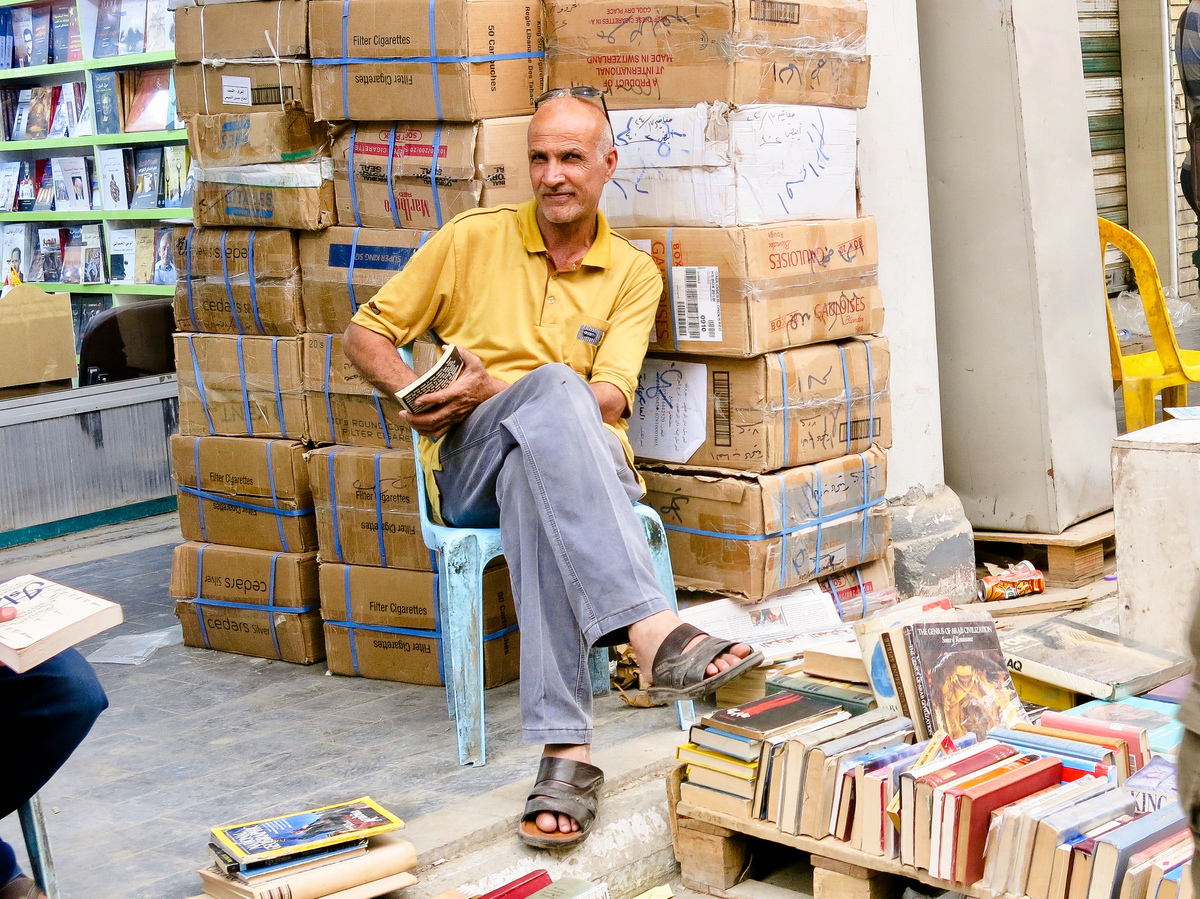 Shalan Zeidan sits next to his books for sale. He has been selling books on al-Mutanabi street for 20 years. He says Iraq has no real government and he won't vote. "They are tribes. We are ruled by tribes."

"I need him to give me something. If he gives me something, I will do anything for him," Salem said.

"Where am I supposed to go? I can't pay the rent," he continued, wiping his eyes as he displayed the last few dinars in his shirt pocket. "Look at all these young men. This is a country with oil and gas and people are going hungry."

"Whoever has a gun is right"

This election features more women running for parliament — almost 40 percent of candidates — than in previous polls. But according to diplomats and activists, the increased presence of female candidates has sparked a backlash in some quarters.

Sex videos supposedly showing five female candidates have been circulated on social media during the campaign. At least one of the candidates dropped out of the race after a video was circulated, although she denied the video was real.

"I think the intention is to drive women away from the political parties," says Hanaa Edwar, a women's rights activist. "It is not only that — I am sorry to say their parties have not defended them."

Edwar, the founder of a humanitarian assistance organization called the Iraqi al-Amal Association, says the focus on the videos is aimed at diverting attention from real issues in the campaign.

In a country routinely ranked as one of the most corrupt in the world, many candidates face an uphill battle to restore faith in Iraq's tarnished parliament. Many Iraqis say they won't bother voting this time.

"I voted three times, but nothing changed," says Yassar Jabar on a recent Friday in Qishla square.

Jabar, 29, graduated from university four years ago but hasn't been able to find a job. "I voted for people who didn't do anything for us," he says.

Nearby, Shalan Zeidan stands over his books spread on the sidewalk for the Friday book market. Art books in English and Arabic, hardback novels and academic journals in English and Arabic lie in careful stacks. Zeidan has been selling books here for 20 years, including the years after the war, when downtown Baghdad was one of the city's most dangerous areas.

Zeidan says when the U.S. removed Saddam, it didn't realize that the repressive system that he nurtured would remain.

"There is no government. They are a tribe," he says. "From the Ottomans until today, it's the power of the gun. Rights are only in books. Whoever has a gun is right. You have a gun, you are right, and I say 'yes' to you."