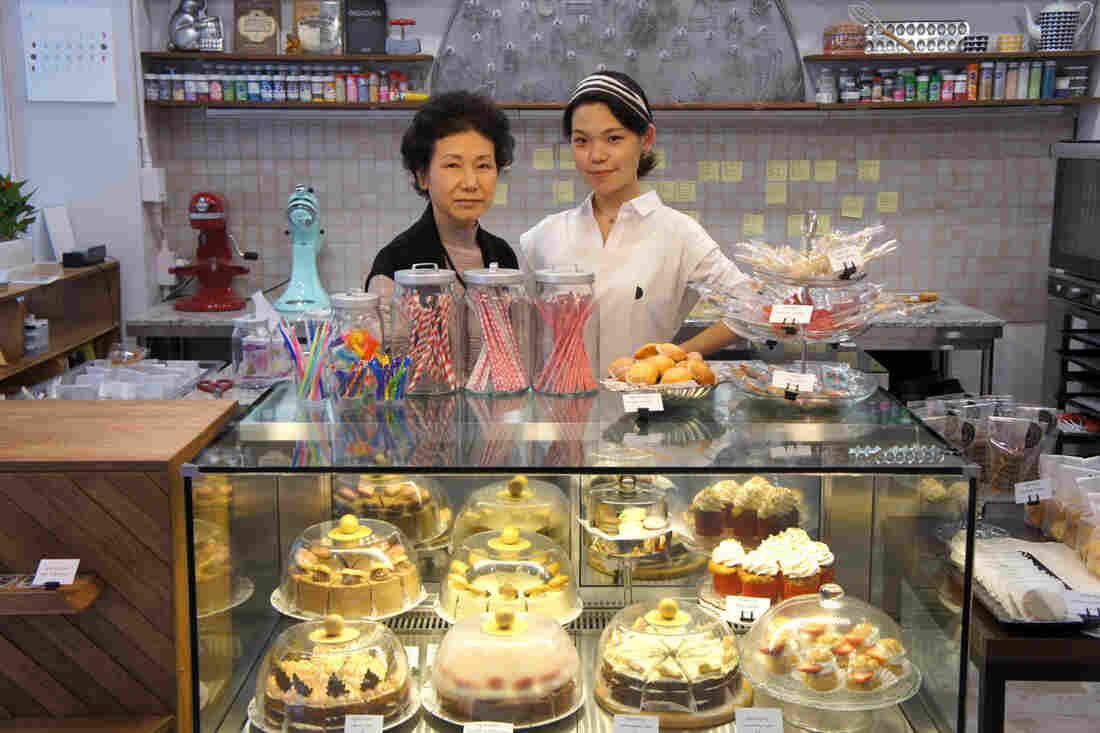 In this photo, Younghwa Chun (left) and Euni Cho celebrate the opening of Sweet Studio Dal D patisserie in Seoul, South Korea, in 2017. Chun was a toddler when her family fled North Korea, and doesn't have memories of life there. Courtesy of Euni Cho hide caption 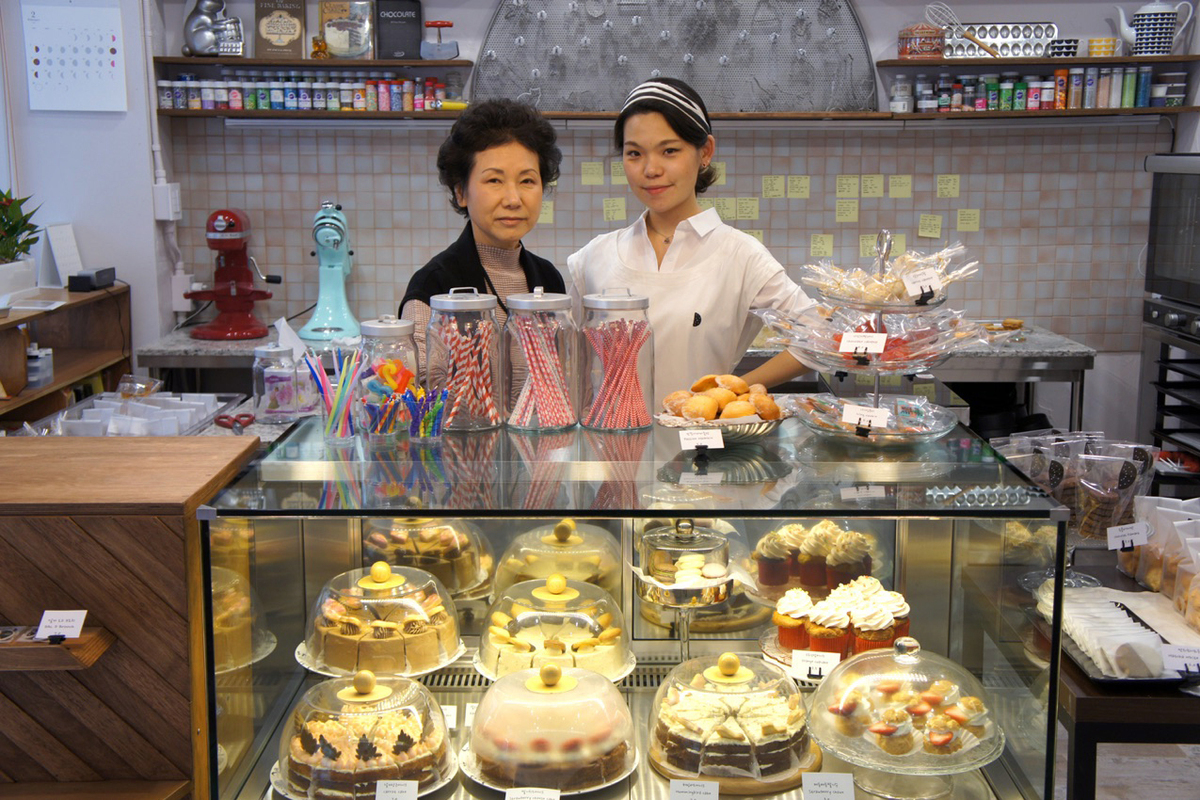 In this photo, Younghwa Chun (left) and Euni Cho celebrate the opening of Sweet Studio Dal D patisserie in Seoul, South Korea, in 2017. Chun was a toddler when her family fled North Korea, and doesn't have memories of life there.

Jean H. Lee, the former Pyongyang bureau chief for The Associated Press, is the director of the Hyundai Motor-Korea Foundation Center for Korean History and Public Policy at the Wilson Center.

Fleeing war in North Korea in 1951, my aunt and her siblings scrambled aboard an American cargo ship pulling away from port, her parents and grandmother shouting their names to keep track of them in the chaos of the evacuation. They made it. But their grandfather stayed behind in Wonsan to protect the family property.

He thought his family would return. They never saw him, or the rest of their family in North Korea, again.

As the leaders of North Korea, South Korea and the United States discuss denuclearization and a possible peace treaty to formally end the Korean War of the 1950s, I wanted to check in with my aunt, a child of the war who was born in North Korea, and her millennial daughter Euni Cho, who grew up in democratic, thriving South Korea.

We international observers want South Koreans to be giddy and euphoric because it fits a convenient narrative. South Korean President Moon Jae-in, too, wants his people to be overcome with emotion: The show of unity in the Demilitarized Zone between the Koreas was meant not only to establish ties between the two leaders, but also to grab the attention and emotions of the South Korean people — and to remind them of their connections to the North even after 70 years of division.

Background And Context For A U.S.-North Korea Summit

Background And Context For A U.S.-North Korea Summit

But I know, from speaking to my own family, how conflicted and complicated their feelings are toward North Korea, and how diverse their points of view are. Each generation bears a different history and, as a result, dreams of a different future.

Polls do show overwhelming support for President Moon's efforts. But have South Koreans so blindly embraced North Korean leader Kim Jong Un's recent overtures promising to renounce provocation in favor of peace? As an American journalist who covered the first inter-Korean summit in 2000, has lived and worked in Pyongyang, and has kept a close eye on the trail of broken promises on all sides over a quarter-century of negotiations with the North Koreans, I watched the Kim-Moon summit — and approach Kim's anticipated summit with President Trump — with a mix of optimism and skepticism. While I'm hopeful things will be different this time, we've been down this path before.

My aunt Younghwa Chun, a Viennese-trained pianist, watched the April 27 inter-Korean summit live on TV at home in a suburb of Seoul.

"I wasn't particularly moved," she says. 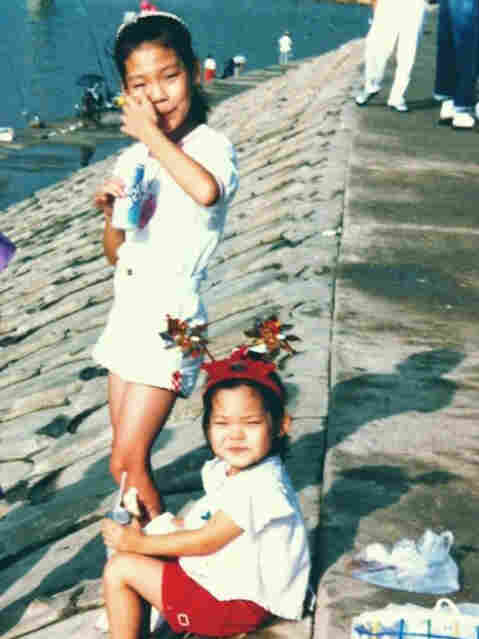 A childhood photo of sisters Euni (right) and Hanna Cho, taken in the southern port city of Busan, South Korea. Their mother Younghwa Chun was born in North Korean and evacuated on a U.S. ship to Busan during the Korean War. Courtesy of Euni Cho hide caption 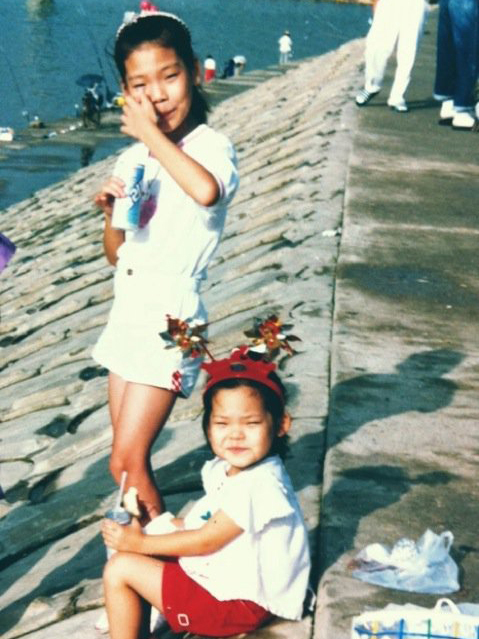 A childhood photo of sisters Euni (right) and Hanna Cho, taken in the southern port city of Busan, South Korea. Their mother Younghwa Chun was born in North Korean and evacuated on a U.S. ship to Busan during the Korean War.

Like President Moon, my aunt's personal history traces back to the North. Her roots lie in Wonsan, the coastal city where Kim has a seaside villa. Later this month, the North Korean government will fly foreign journalists, including South Koreans, to Wonsan as part of a media junket designed to broadcast to the world the promised destruction of a northern nuclear test site.

My aunt was a toddler when her family fled, and doesn't have memories of life in North Korea. But she heard countless stories of life under communism and arduous journeys south — "if people fell off the boat, you could lose family members forever" — while growing up in Busan, the South Korean port city where the cargo ship landed and where many North Korean refugees scraped together new lives.

"When we were younger, we hated communism. They don't have the freedoms of democratic nations, and they maintain oppressive control," she says. "They execute people and kill them without trial."

For many in South Korea, live footage of their president holding hands with Kim and the two chatting privately — on the South Korean side of the DMZ — was altogether stunning. No North Korean leader before Kim Jong Un had ever set foot in South Korea since the 1953 Korean War cease-fire, and here he was, laughing with their president. The moment humanized Kim, and by extension all North Koreans, for many South Koreans — including my maternal uncle, Sung-jin Cho, who was sitting next to his wife at home watching the televised events unfold.

"I was a bit skeptical but my husband was very enthusiastic. He was intrigued by the summit," my aunt says. "But he's from Seoul, and I'm from a family from North Korea, so there's a difference in perspective." 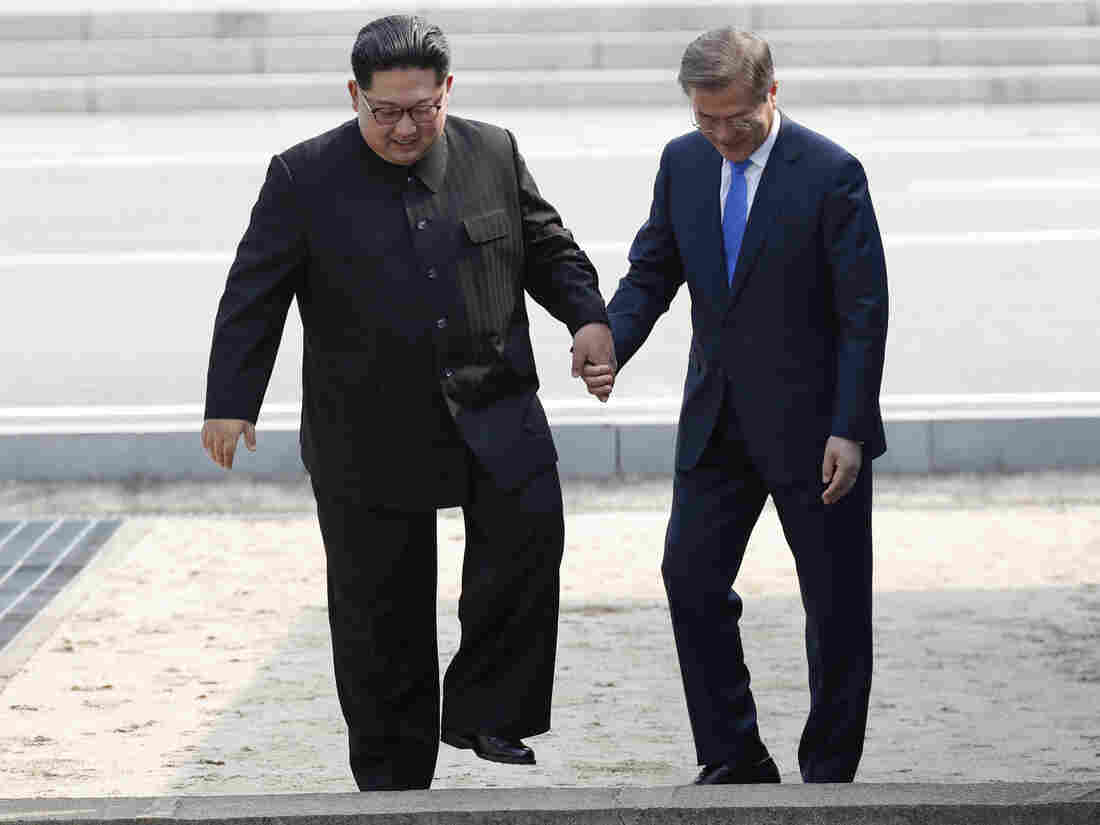 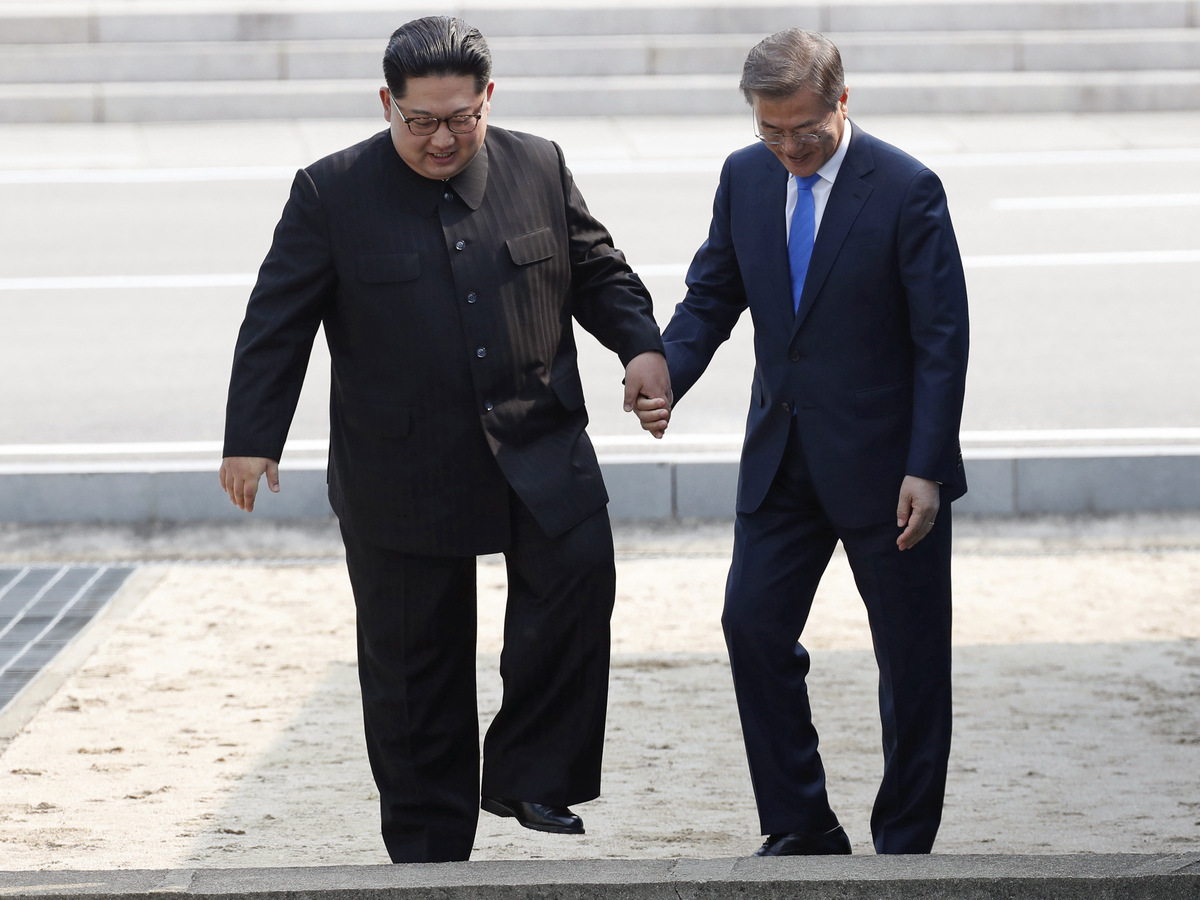 At 70, my aunt is coolly rational about the sudden shift in the North Korean leader's image. She notes that he executed his uncle and may have ordered his brother's assassination in recent years. "I'm doubtful whether he could change just like that," she says.

She's watching to see how things go between Kim and President Trump at their historic summit in Singapore on June 12 before she puts any faith in Kim's word. North Korea, in an abrupt shift in tone, threatened Wednesday to pull out of those talks, raising questions about whether the meeting will go ahead as planned.

"Most of us are a bit skeptical. North Korea has done so many bad things. They've lied so much, which is why we can't trust them," she says. "I'm half doubtful. We'll see."

She has another concern: whether President Trump will agree to withdrawing the 28,500 U.S. troops protecting South Korea while negotiating a peace deal with the North to formally end the war in exchange for pledges on denuclearization.

Trump Meets 3 Americans Held In North Korea As They Arrive In U.S.

"If we open our doors completely and the U.S. troops are evacuated, I'd be very anxious," she says. "I think the U.S. troops need to stay until South Korea can stand on its own."

She harbors hope for reunification of the divided Koreas, but cautions against moving too quickly.

"We're not foreigners; we're one nation. I hope we're able to find peace," my aunt says. But "even when we reconcile with a friend, we don't laugh together the next day. There's always some pent-up anger."

Meanwhile, my cousin Euni was busy getting ready for work on the morning of the Korean summit. In her early 30s, Euni owns a patisserie called Sweet Studio Dal D in the trendy hillside neighborhood of Gyeongnidan near the U.S. Army base.

Euni was 3 when Seoul hosted the Olympics in 1988, an event that served as a turning point in South Korea's transformation from poor, war-torn country to tiger nation determined to join the First World. She grew up in an increasingly globalized South Korea. Her struggles and goals as a young South Korean differ from her mother's as a refugee from the North.

I think the U.S. troops need to stay until South Korea can stand on its own.

"All I knew about North Korea was what I learned from my parents, calling them 'commies,' " Euni recalls.

She grew up in the affluent Gangnam section of Seoul. "Everyone around me was well off," she says, "and no one cared about the issues between North Korea and South Korea because we led comfortable lives."

As far as she and her friends were concerned, "North Korea was a scary presence, and no one supported reunification."

Growing up with threats from North Korea all her life, she had become inured to them. It was during a stint studying at a pastry school in Chicago a few years ago that she saw how North Korea's nuclear tests and missile launches looked from afar.

"When I told people I was from South Korea, they thought I came from a dangerous country," she says at her bakery. "We may be numb to it but it's true that we live on a peninsula with nuclear weapons. It must've looked dangerous from the outside."

I don't really feel that we are one nation. The two nations have very different values.

Euni's preoccupation has been to build a small business in a competitive, high-pressure economy — not threats from North Korea.

"Even though people spoke of the possibility of war," she says, "it doesn't immensely affect our daily lives, and we don't worry about it every day."

Nonetheless, she decided to watch the summit on her iPhone while commuting to the bakery. Her immediate reaction was one of amusement: "It was more interesting than it was moving."

Two weeks later, she put the event into broader perspective, calling it unprecedented and impactful. "I'm hoping for good results," she says. "We came all the way here. I hope we don't go back in history."

What To Expect From Friday's Summit Between North And South Korea

But Euni draws the line at supporting reunification, saying she finds it hard to picture how they will bridge the economic gap when life is already so difficult in competitive South Korea, not to mention the cultural differences after 70 years of division.

"I don't really feel that we are one nation," Euni says. "The two nations have very different values." Reunification may have benefits — but could also be damaging to society and to the economy, she says.

As leaders negotiate the future of the Korean Peninsula, they must keep the divergent dreams of the different generations in mind. After all, it's young South Koreans like my cousin, working late into the night baking birthday cakes, who will pay for reconciliation and reunification — or, as I remind her, of provocation.

"For me, it's more about whether there will be war on the Korean Peninsula. So if that issue is resolved and we can maintain peace, it would be even better if we could interact," Euni says as she prepares to dive into the day's baking.

"But I'm thinking: 'Must we become one nation?'"