Accessibility links
A Royal Wedding With Global Appeal : Parallels Interest in Prince Harry and Meghan Markle transcends borders in a way that past royal weddings have not, writes Autumn Brewington, who anchored The Washington Post's royal wedding blog in 2011.

A Royal Wedding With Global Appeal

A Royal Wedding With Global Appeal 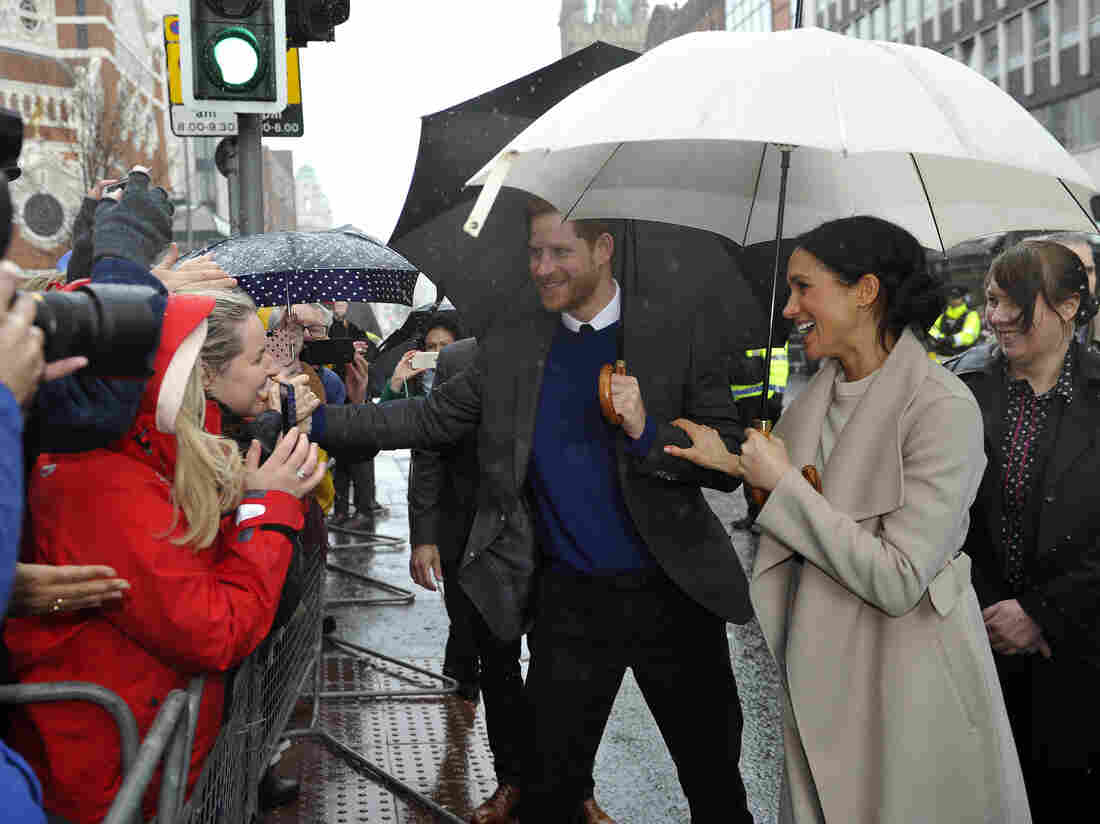 Autumn Brewington (@Autumnsan1), a freelance journalist in Washington, D.C., was an editor at The Washington Post from 2001 to 2014 and anchored its royal wedding blog in 2011.

The rehearsals are done. Union Jacks are fluttering across Windsor. Metal barricades line the Long Walk to Windsor Castle, and father-and-son horses Storm and Tyrone are ready to pull the polished carriage. The nuptials of Prince Harry and American actress Meghan Markle are poised to go off Saturday morning with all the usual pomp and circumstance of a British royal wedding.

But this is not merely a British and American affair.

Fans pouring into Windsor — and the many, many journalists following them — have come from around the world. Interest in this couple transcends borders and nationalities in a way that past royal weddings have not. So does empathy about the Markle family controversy that has played out publicly in recent days.

Seven years ago, on the gray April morning that Prince William and Kate Middleton married in 2011, I watched as Londoners and tourists crowded into the Tube — some already drinking before 9 a.m. — and then amassed in Hyde Park, one of the places where large screens were set up for crowds. Bottles popped open as people watched wedding guests and the royals arrive at Westminster Abbey. When William and Harry appeared on screen, the cheers were long and loud, and some in the crowd talked about the significance of seeing Princess Diana's son marry. 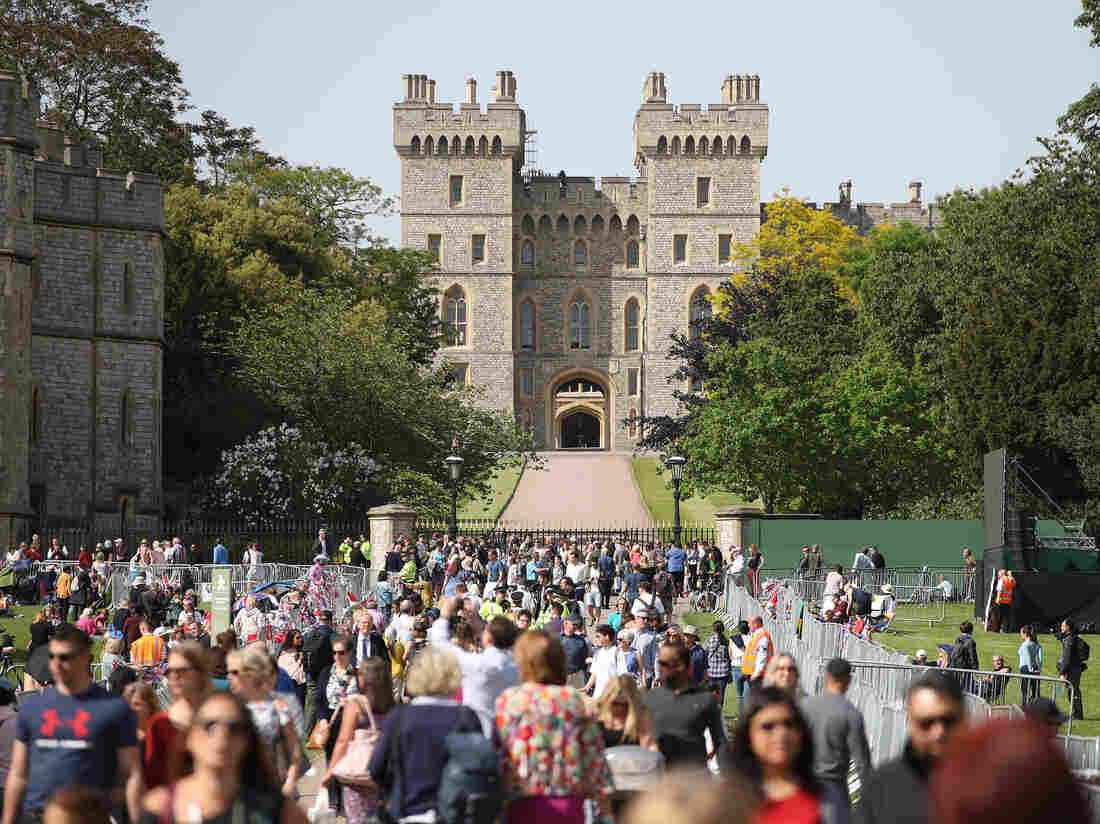 Crowds begin to gather on Friday, ahead of the royal wedding of Prince Harry and Meghan Markle. Chris Jackson/Getty Images hide caption 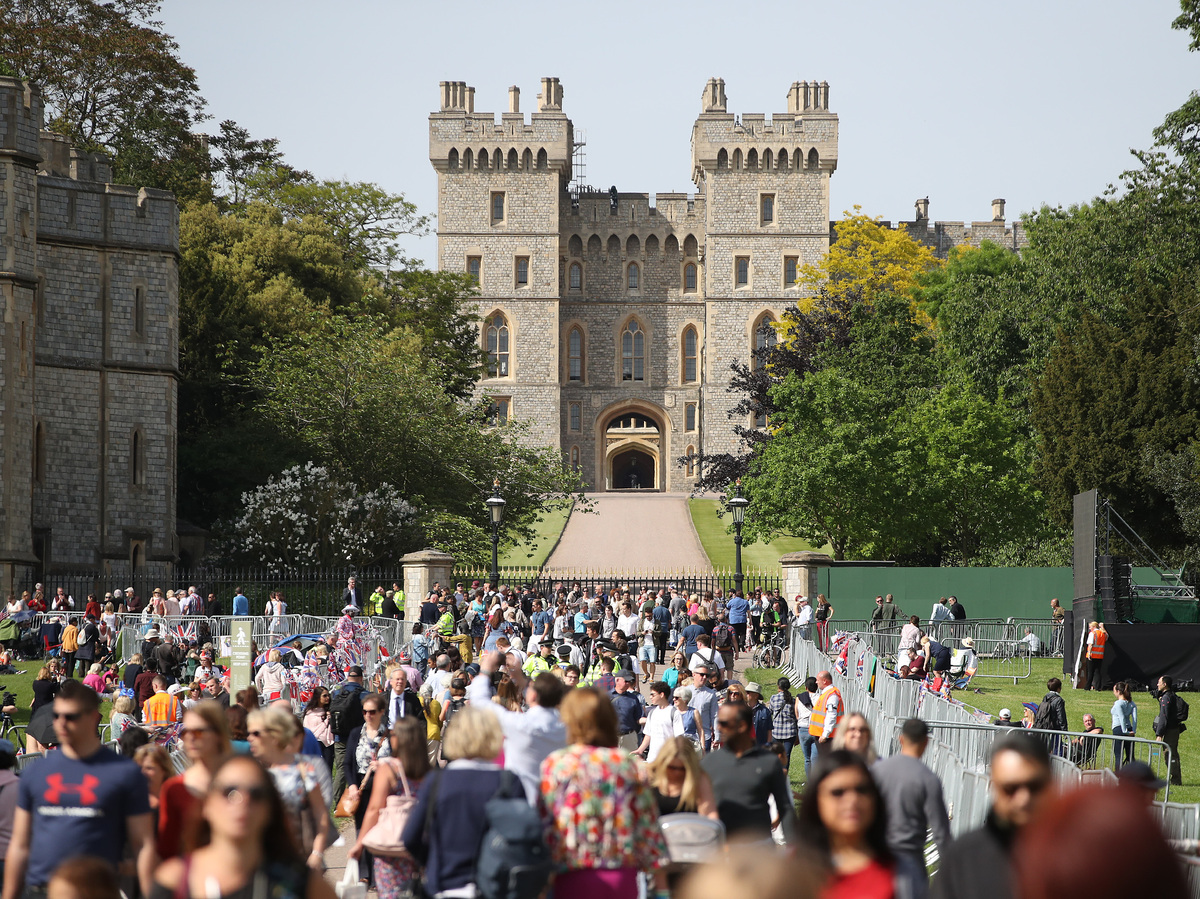 Crowds begin to gather on Friday, ahead of the royal wedding of Prince Harry and Meghan Markle.

As a reporter in the park, I was struck that day by the disconnect I felt from the events around me. This was more than journalistic objectivity and remove. I realized that, for everything I knew after two decades of reading about the royals, I had factual knowledge, but not the same emotional investment or experience. I was observing a British national event. The people around me were experiencing and celebrating it as their own, and I was merely watching something unfold. I could know the details, but it was simply not my event as an American.

Something about Prince Harry and Meghan Markle, however, allows people of all nationalities to claim this wedding, and this couple, as theirs. Harry radiates warmth and joviality, and his personality lands him at the top of royal popularity polls. The drama surrounding Markle's family — criticism and hurt feelings expressed by various siblings and her father's struggles — is a reminder to everyone that a wedding, even that of a prince, is about two people committing to become a family and that beyond marriage, one cannot choose one's relatives.

Ironically, personal embarrassment on a scale with which few can empathize allows people everywhere to relate to this royal couple. And some have shrugged off the controversy, noting that the royals have had their own share of public embarrassments.

The scale of the turnout Saturday (100,000 are expected in Windsor, with millions watching around the world) is, in some senses, outsize given Harry's rank: This is not a state occasion or a government holiday. The prince is never expected to be king. One recent poll suggested that two-thirds of Brits are uninterested in the wedding, up from 52 percent uninterested shortly after the couple got engaged. There is a substantial decline in planned street parties from those held for the wedding of William and Kate. 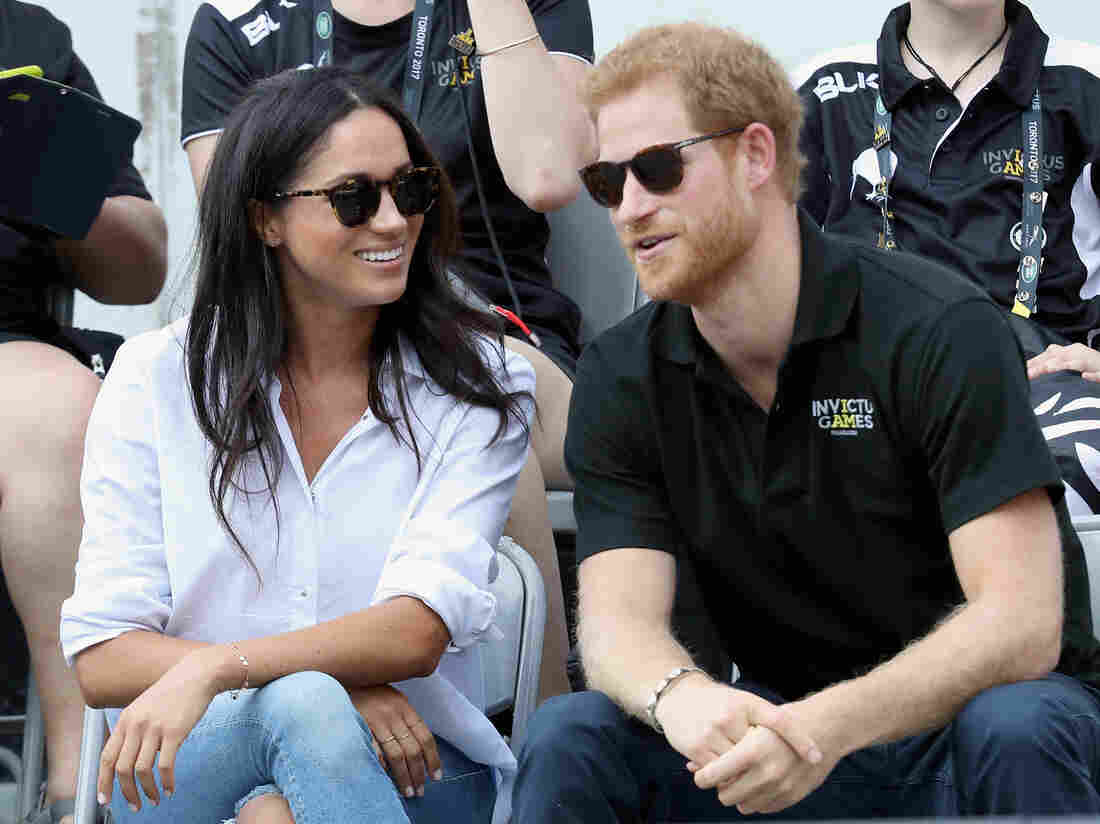 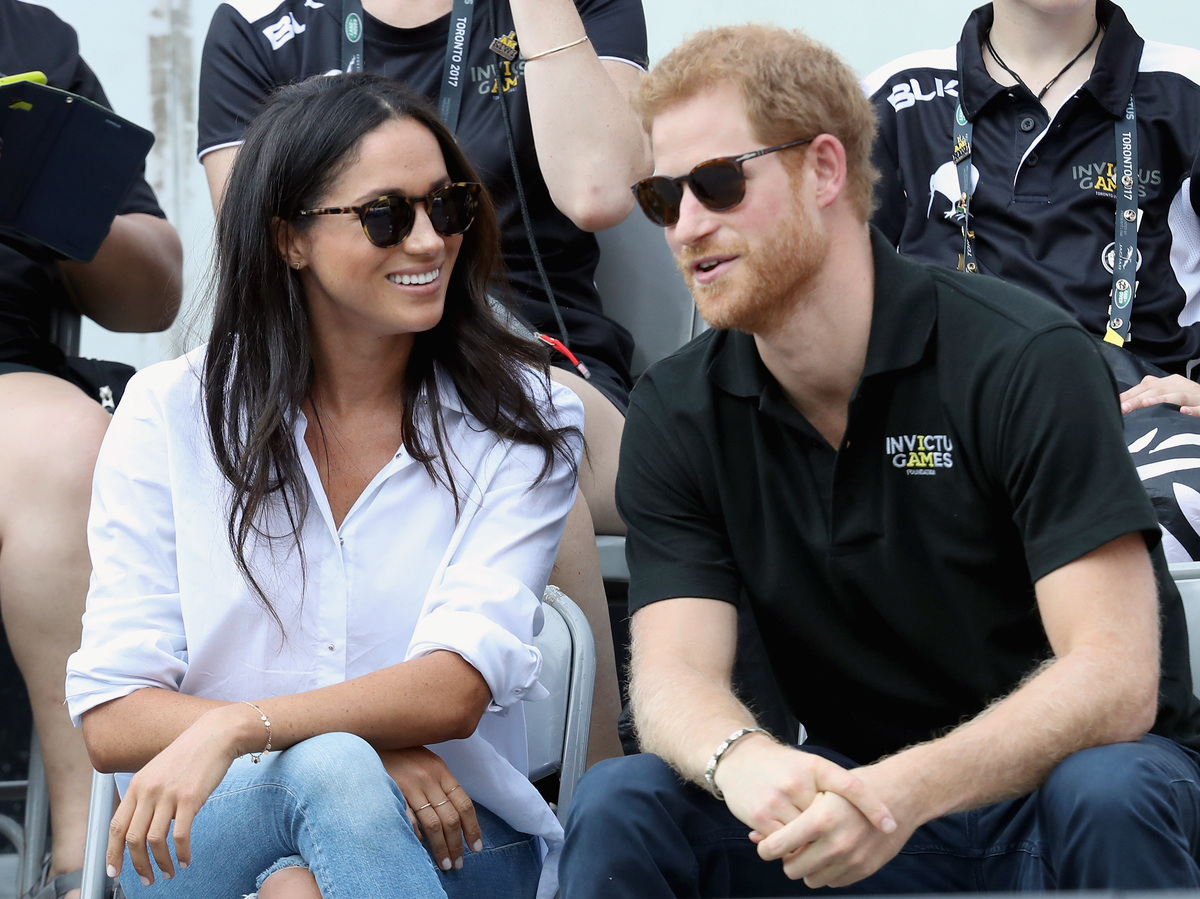 Prince Harry and Meghan Markle attend a wheelchair tennis match during the Invictus Games 2017 in Toronto. Prince Harry created the games in 2014.

Yet even if wedding fever has not gripped Britain the way it did for the future king, this union appeals to nonroyalists as well as traditional fans of the crown outside the U.K. Being further away from the throne, the couple are freer to be themselves — and the prospect of seeing this unexpected match, a British prince and a minor American celebrity, happy together has drawn thousands to London and Windsor this week.

Many remember Harry as the devastated 12-year-old boy who walked behind his mother's casket in 1997. They've watched him mature from a juvenile party prince (with Nazi costume and Vegas photos) to a soldier and helicopter pilot with a humanitarian bent. He spearheaded the Invictus Games for wounded veterans. Last year, he opened up about not addressing his grief over his mother's death and the internal chaos it caused.

Markle hasn't been in the spotlight for nearly so long, but much has been written about what she means to black Britons and what she, a biracial woman, inspires others to think about race and royalty. Markle has written powerfully about her mixed-race heritage and experiences with racism. She also continues to speak about her interest in women's empowerment. Many expect her to help modernize the royal family, to help it better resemble British society, or both.

Markle confirmed in a statement Thursday that her father, Thomas Markle, who had heart surgery this week, would not attend the wedding. "I have always cared for my father and hope he can be given the space he needs to focus on his health," she said.

For all the unanswered questions around the Markle family drama (Why does the bride's father continue to talk to TMZ? Did the family get any media assistance, ever, from the palace? Did anyone expect public criticism to produce a positive outcome?), a line from a May 3 letter by her half-brother summarizes what many might have concluded themselves: "good bad or perfect," we're "the only family that you have."

After Saturday, of course, Markle will have added Harry and the rest of the royals to those she can call her own.