Accessibility links
Venezuela Holds Presidential Election But Main Opposition Is Boycotting It : Parallels Deep economic crisis and distrust of the government seem to have corroded many Venezuelans' faith in politics. Main opposition parties are even boycotting Sunday's vote. 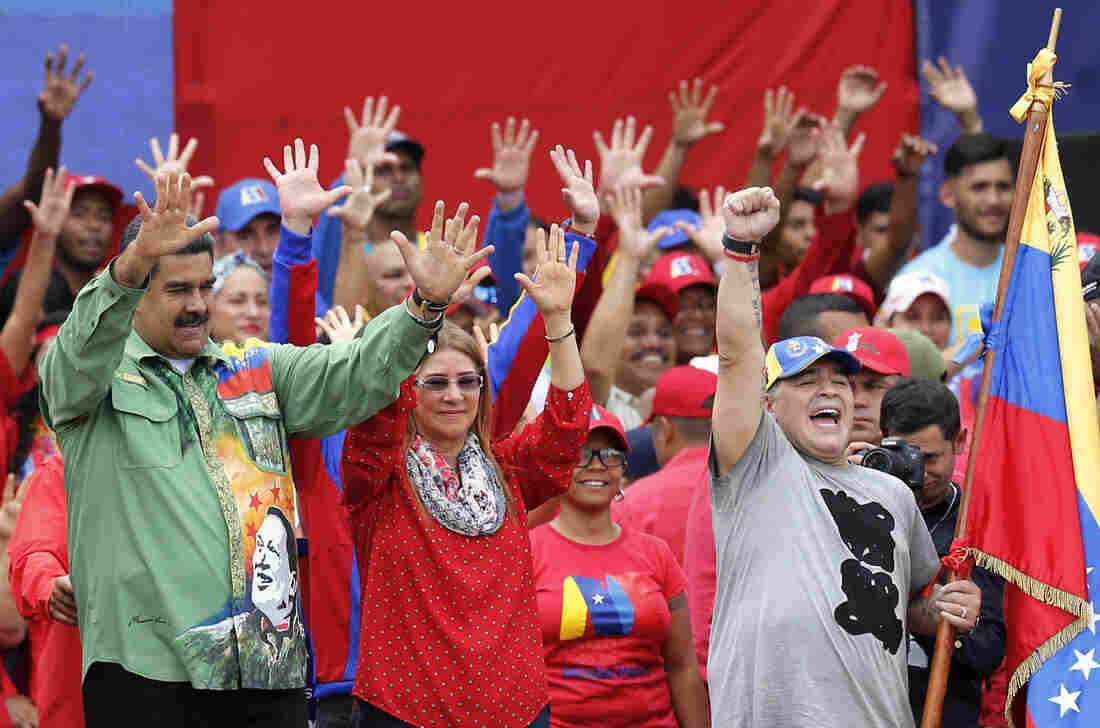 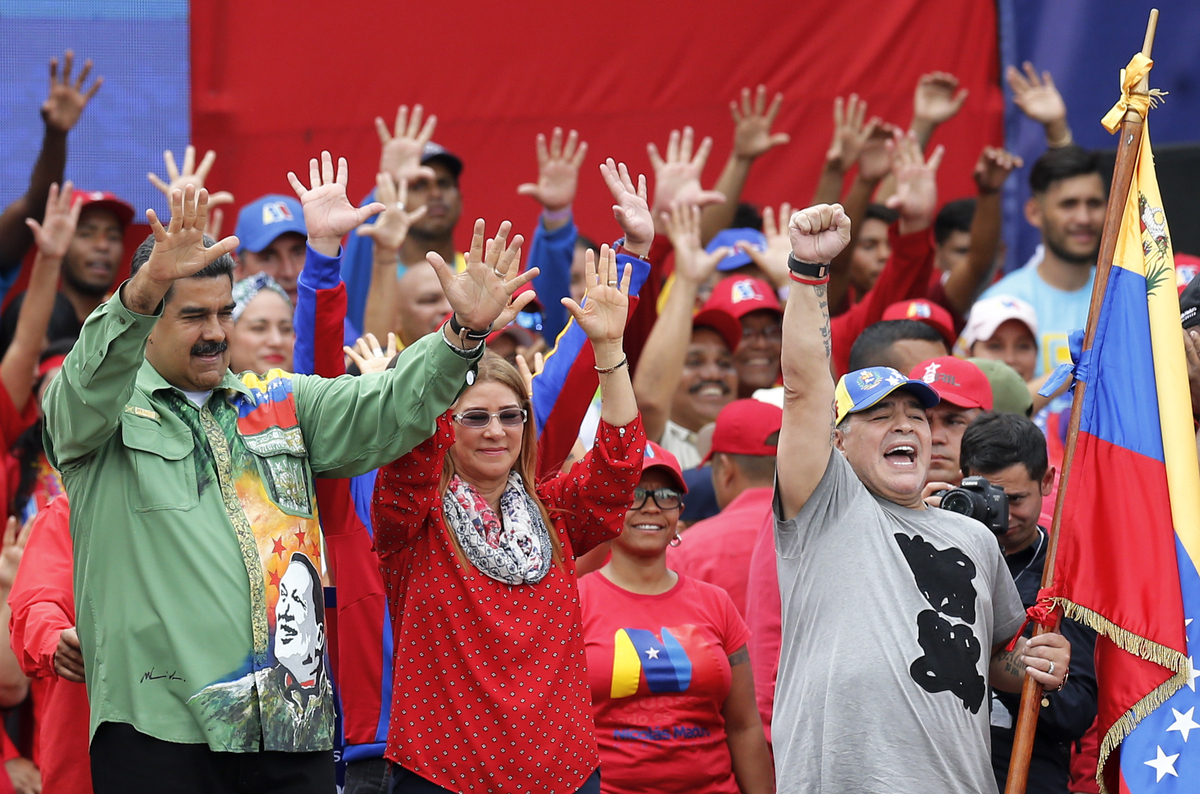 When Ariles López takes a break from her fruit stall and begins to describe her life in Venezuela, there is a moment when she chokes up and begins to cry.

That will not come as a surprise, when you hear her story.

López, who's 47, is among those Venezuelans who say they will vote in Sunday's election, despite a widely held view that it's a fraudulent exercise calculated to keep President Nicolás Maduro in power.

She is desperate for change, after a year of personal hardship that underscores the scale of the multilayered catastrophe that is engulfing Venezuela: hyperinflation, widespread hunger, deaths from preventable diseases, and a wave of deadly crime.

López's husband was killed last July at a gas station near the fruit and vegetable market in east Caracas where he once worked — and where she now runs their stall singlehandedly, selling mangos and plums.

She says he was accosted by two men trying to steal his cellphone. "I don't know if he struggled with them, but they shot him in the chest, and took his phone," she says. "He lasted five days in hospital, and then died."

A few months later, López's diabetic mother became ill and fell into a coma because she was unable to find medicines to control her blood sugar levels. López says she issued an appeal on Facebook, and eventually found someone in Caracas who had the right medication, and was willing to sell it. Her mother survived.

López pulls out her cellphone and proudly shows a photograph of a third family member: her 2-month-old granddaughter Brianna.

The other day, the baby developed a stomach sickness. It cost two-thirds of Venezuela's monthly minimum wage to buy a tiny jar of medicine, says López. "She's better now. But it's hard to get stuff for the baby. I'm very concerned."

Finding milk means getting up at 2 a.m. and joining one of the many food lines that snake along the streets of Caracas, she adds.

Stories of similar ordeals are common among Venezuelans, who are enduring an exhausting daily struggle to survive, coupled with constant anxiety and fear. For many, the worsening economic crisis and a deep distrust of the government seem to have corroded their appetite for — or faith in — politics. The run-up to the election has been remarkably lackluster. 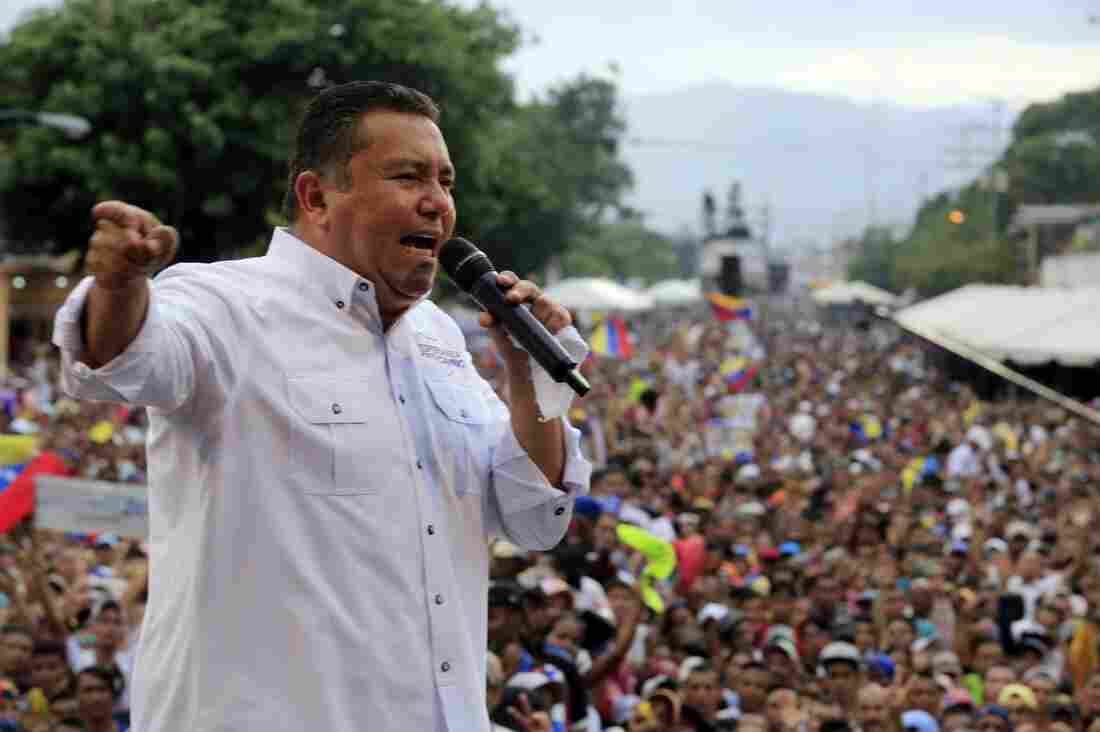 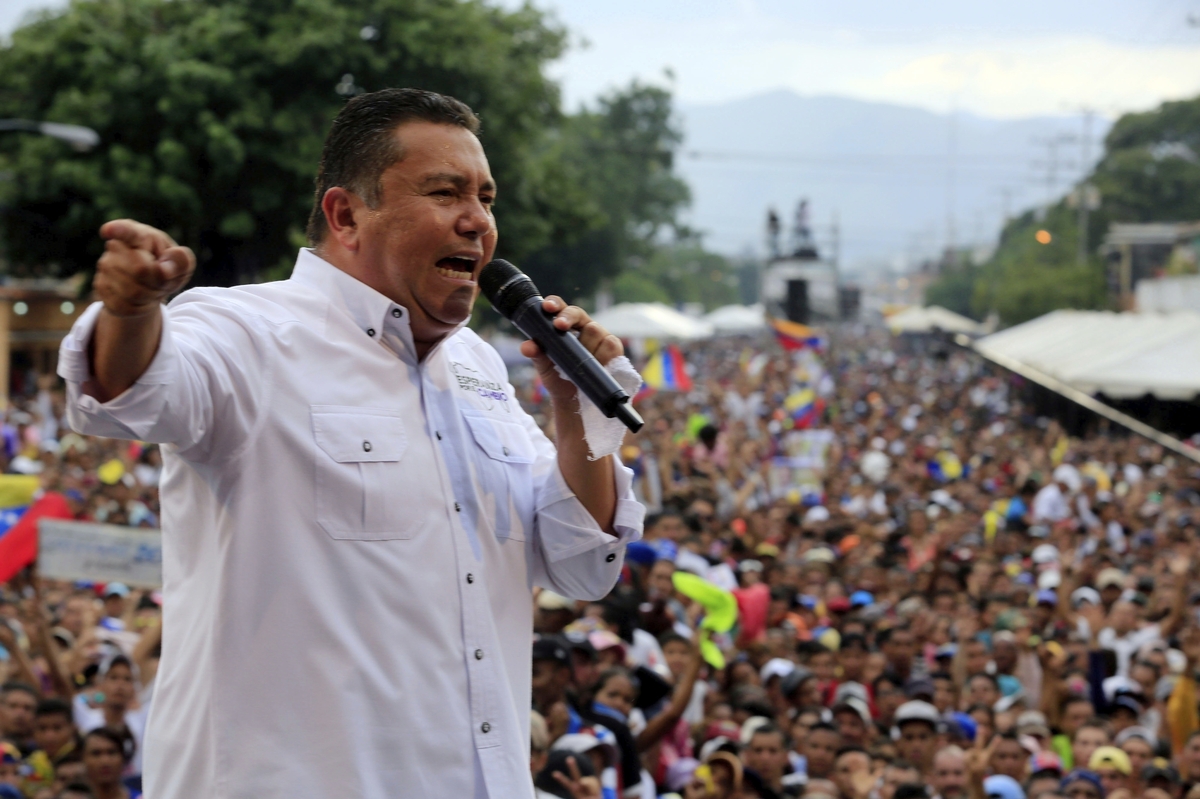 Venezuelan presidential candidate Javier Bertucci delivers a speech during a rally in Valencia, Venezuela, on Wednesday.

Yet López has become determined to vote, even though she, too, doubts whether the election will be fair. She supports an evangelical candidate, Javier Bertucci.

"The longer [Maduro and the ruling socialist party] are in power, the harder it is to imagine them leaving," she says. "But I say that all Venezuelans should get out and vote, after everything we've been through, and tackle everything that's happening to us."

That message is shared by a figure who has come to dominate debate surrounding Venezuela's election: Henri Falcón, 56, a former state governor who broke with the ruling party in 2010 and is now President Maduro's main challenger. Venezuelans appear divided over what to make of Falcón's candidacy. 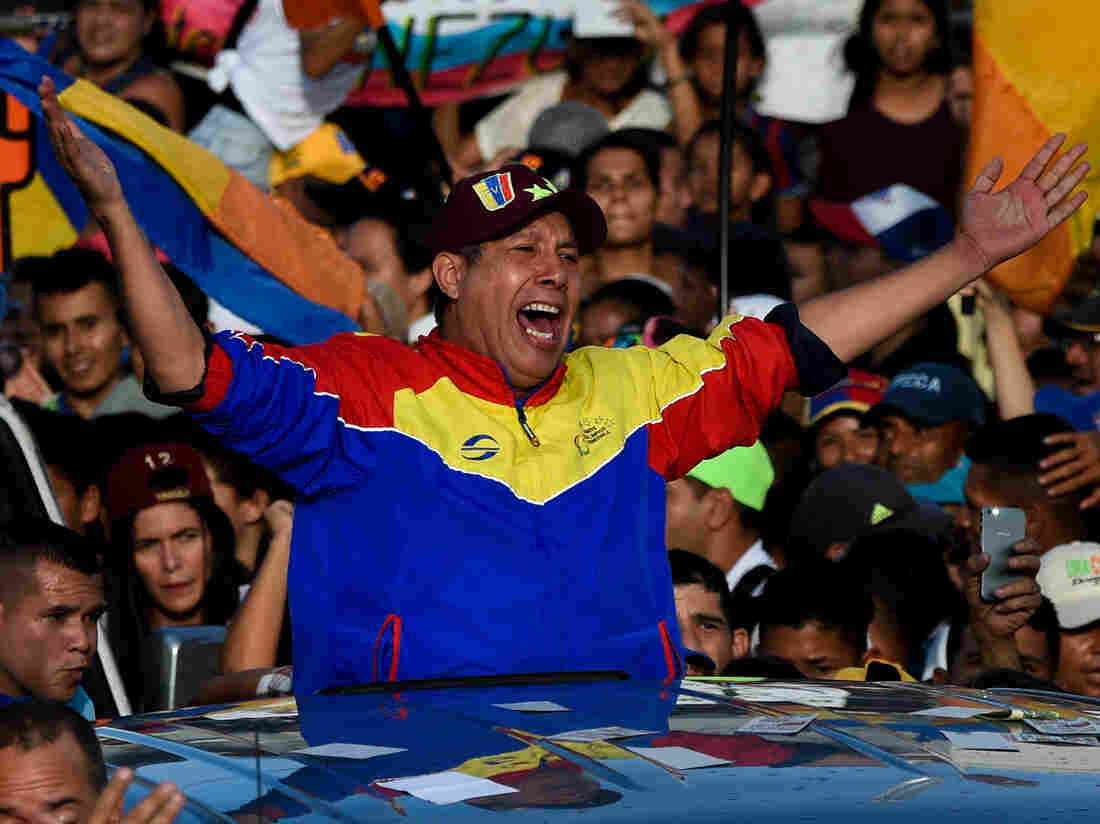 Venezuelan opposition presidential candidate Henri Falcón at the closing rally of his campaign ahead of the Sunday's election, in Barquisimeto, Lara state, Venezuela on Thursday. Federico Parra/AFP/Getty Images hide caption 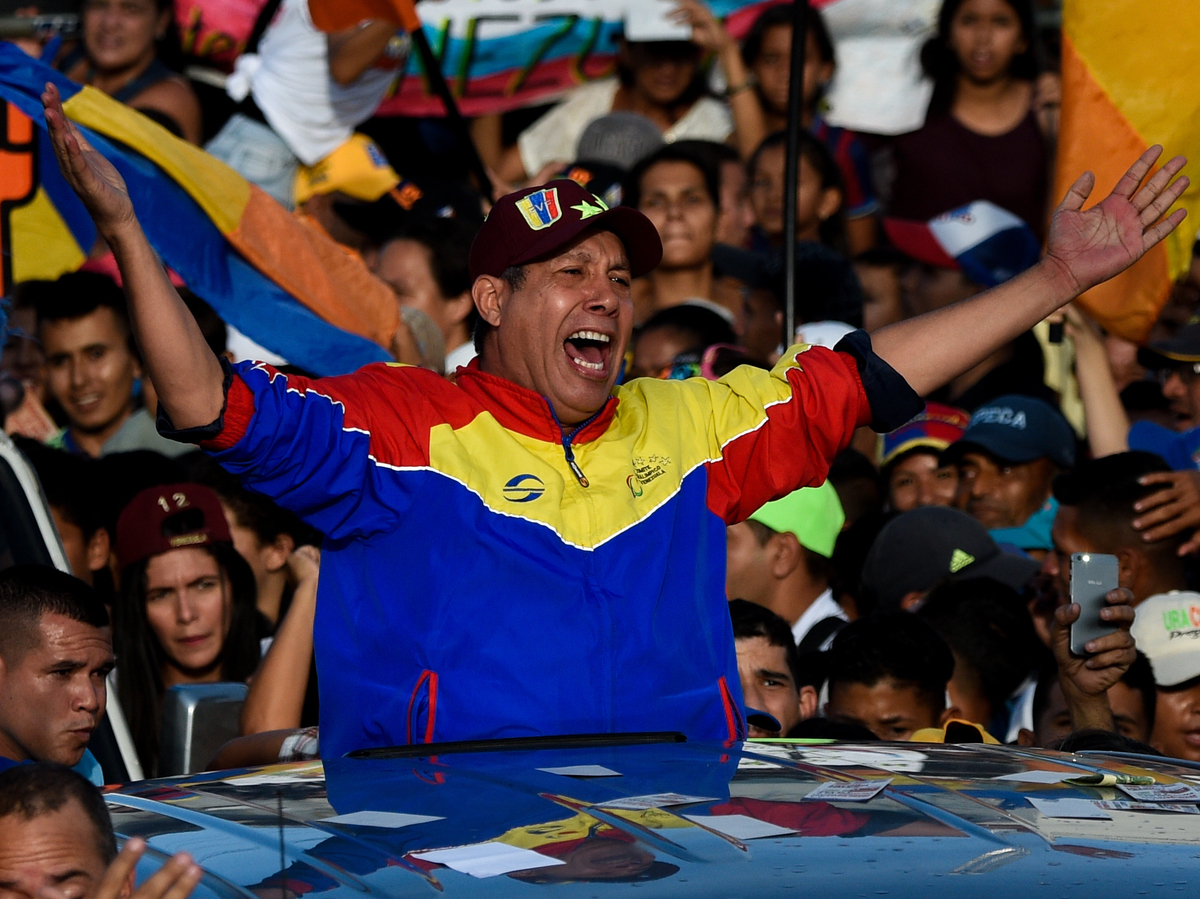 Venezuelan opposition presidential candidate Henri Falcón at the closing rally of his campaign ahead of the Sunday's election, in Barquisimeto, Lara state, Venezuela on Thursday.

Polling makes it hard to gauge: While some recent surveys have Maduro in the lead, some put Falcón ahead, while others have them tied. Many Venezuelans are expected to abstain from voting.

Falcón's decision to run has enraged Venezuela's main opposition parties, who are boycotting the vote. They see the election as fraudulent — a view shared by the United States and others in the international sphere — and accuse Falcón of legitimizing it. 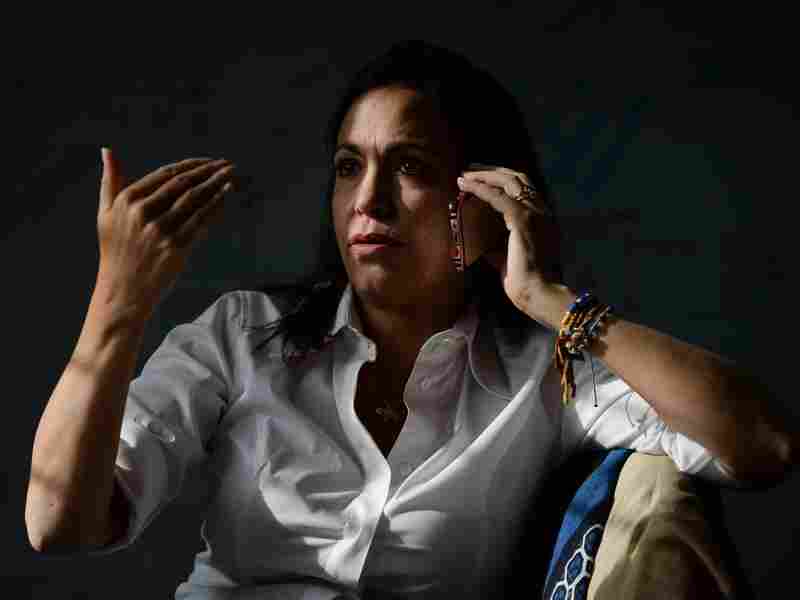 Venezuelan opposition politician María Corina Machado speaks on her mobile phone before an interview with the AFP in Caracas in August 2017. Federico Parra/AFP/Getty Images hide caption 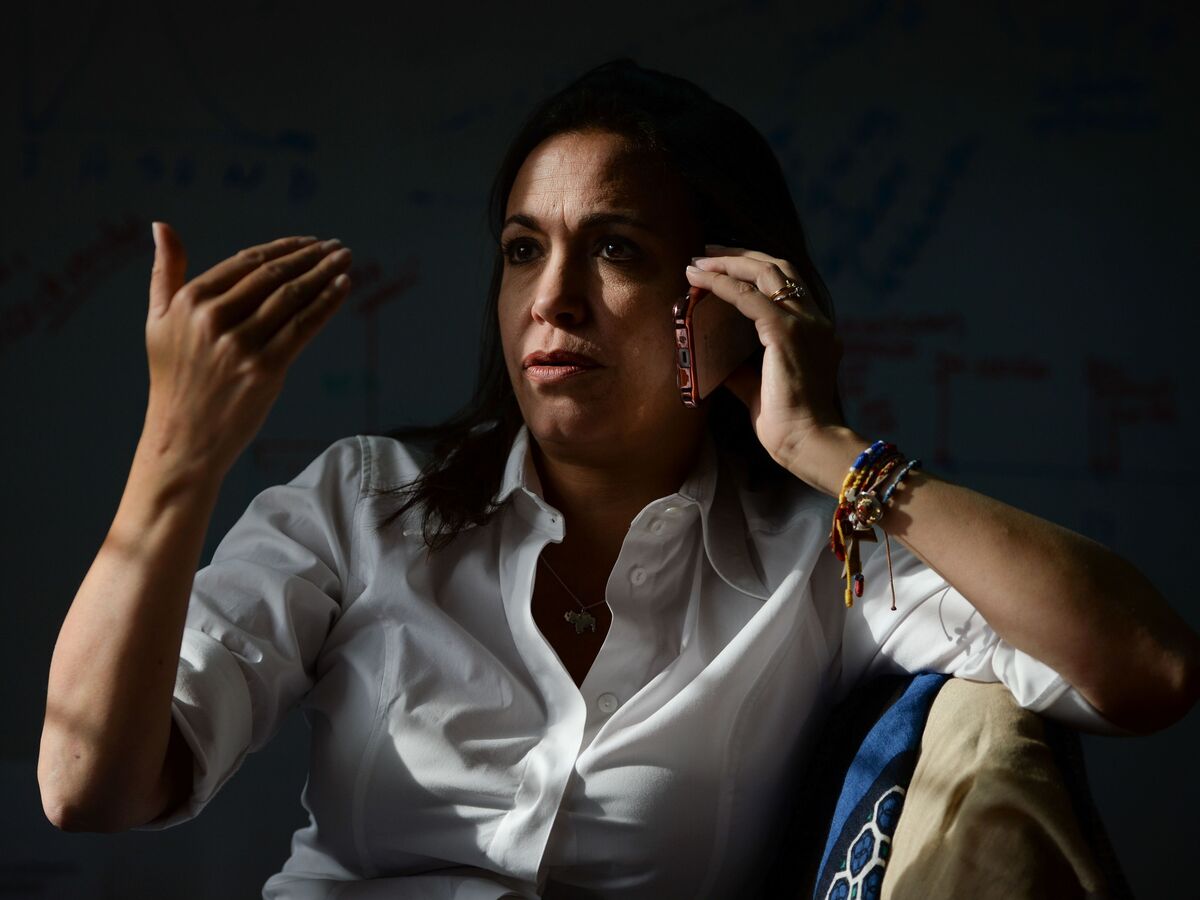 Venezuelan opposition politician María Corina Machado speaks on her mobile phone before an interview with the AFP in Caracas in August 2017.

"I believe Mr. Falcón is part of the system we are trying to change," said María Corina Machado, a prominent opposition leader.

"There are many [vested] interests right now in our country [aiming] to keep the status quo," she said. "Some people believe it will be possible for Maduro to go, but leave all the mafias in place. That is not going to happen."

Yet Falcón insists the boycott plays into Maduro's hands, and that you cannot defeat him unless you actually enter the contest. Falcón argues if Venezuelans turn out and vote, he'll win — although it is far from clear what would happen after that.

Many analysts have concluded that — no matter the outcome — Maduro will remain in power, helped by an autocratic control of state institutions. The president's approval rating has hovered around 20 percent, which is low compared with past support for his popular predecessor and mentor, the late Hugo Chávez. Some polls predict President Maduro earning more than that percentage of the vote on Sunday.

A re-election would delight Nicolás Barrios, a 25-year-old student who is an ardent supporter of Maduro. Barrios appears convinced by the Chavista argument that Venezuela's problems are not of its own making, but the result of an economic war waged by the outside world, notably the United States.

Like many young people in Caracas, Barrios has seen friends leave the country to work abroad in search of work and income. His girlfriend has gone to Argentina, where she sells ice cream and earns more in a day that he can in a month.

He says she has been urging him to join her, but he steadfastly refuses to go. "She's told me several times to come, but I don't do it," he says. "I don't go, because this is my country and we have to stay and fight. I love her a lot, but she's decided to leave, and I'm staying."

López, the fruit seller, wishes she could go abroad, like the hundreds of thousands of Venezuelans who've left the country in recent years as the crisis worsened. That way she could earn some hard currency to support her family. Her brother has migrated to Colombia, where he washes cars.

Yet when López applied for a passport this week, she says she was told must pay a $700 bribe — a sum way beyond her means. It reinforced her view that change is urgently needed.

"What we are going through in Venezuela is very sad," says López. "A lot of mothers are sending their children out to find food. You see kids in dumpsters looking for food."

She's worried about what will happen after the election, if Maduro remains, as she only sees Venezuela's crisis getting worse. "I'm very afraid," she says. "All the people are afraid."