Accessibility links
As Trump-Kim Summit Approaches, South Korea's Leader Heads To White House : Parallels The talks are still expected to happen next month in Singapore, despite North Korea's threats to back out. The South Korean president is playing mediator to keep things on track. 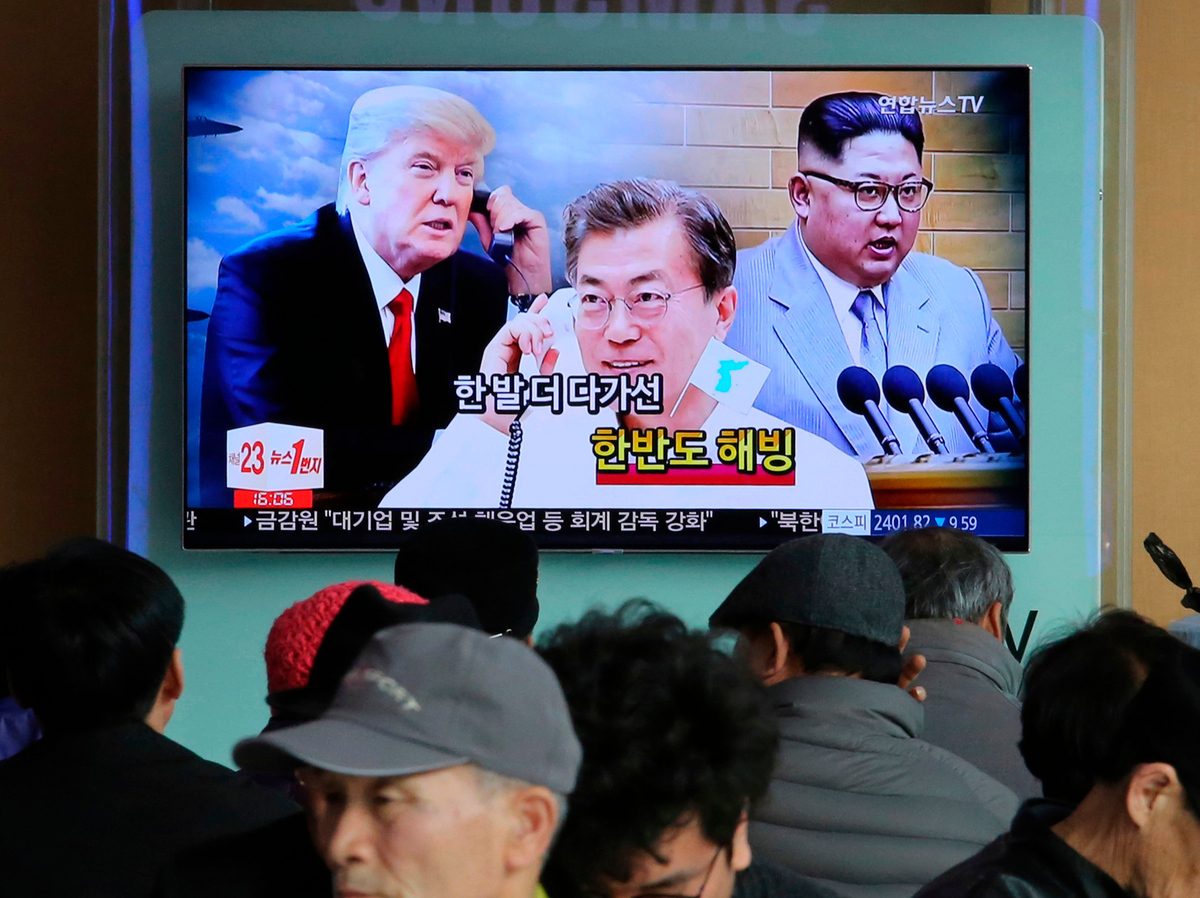 South Korea's President Moon Jae-in is in Washington to meet with President Trump, as plans for a high-stakes summit next month between the U.S. president and North Korean leader Kim Jong Un hit some turbulence.

With North Korea's threats to back away from the talks, South Korea's leader — who has long favored engagement rather than confrontation with Pyongyang — is having to do some diplomacy to keep both the U.S. and North Korea interested in talking.

A year into his term, President Moon's approval rating has soared to 83 percent, according to a Gallup Korea poll — with a majority of South Koreans supporting his efforts to secure a peace deal with North Korea.

Last month, Moon and Kim held a historic one-on-one meeting in the Demilitarized Zone between their countries, walked hand in hand, and announced they would work toward peace and denuclearization on the Korean Peninsula.

Moon is expected to share his read on the North's leader with President Trump when they meet at the White House Tuesday.

Miyeon Oh, a senior fellow at the Atlantic Council think tank, says Trump and Moon have been coordinating throughout the spring.

"It is a way to ensure that South Korea and the United States are aligned and there will be no differences between the two that can be exploited by Kim Jong Un," Oh says.

South Korea's presidential office says this White House meeting will serve as a bridge to the summit between Trump and Kim scheduled for June 12 in Singapore.

But already, the path to denuclearizing North Korea is getting gummed up. Last week, Pyongyang threatened to cancel the Singapore summit, citing its objection to nearby joint U.S.-South Korea military drills, and it rejected U.S. National Security Adviser John Bolton's calls for unilateral denuclearization.

Oh says the warning came because North Korea believes its nuclear arsenal means it deserves more respect ahead of talks. Or, it could just be a move from the usual Pyongyang playbook.

"We have seen a repeated pattern of North Korea's tactic of negotiations, which tends to drag the time until the very last minute when they decide what they can accept and do not," Oh says.

President Moon's now having to play mediator, using his years of familiarity with North Korea's tactics, in Washington, where there's little trust in Pyongyang given past failures.

"We know that," says Park Ihn-hwi, a professor at Seoul's Ewha University. "We fully understand such kind of tactical calculation of North Korea. We will have some problems, but the role of the mediator will efficiently continue."

"He's tried pretty hard to keep this whole thing on track," Kelly says. "You know he's got some difficult customers to deal with, right? He's got Kim Jong Un and Donald Trump, that's gotta be quite ... difficult."

Kelly says ultimately the problem heading into Singapore is the wide gulf between U.S, objectives — and North Korea's.

"The North Koreans are famous for all kinds of off-the-wall negotiating tactics. So I would like to see this go a little more slowly, so all of this can unfold properly so we can understand all the choices being made. But I don't know that Donald Trump is going to get on top of all this in just three weeks," Kelly says.

President Moon — the only U.S. ally known to have spent a whole day with Kim — will do his best to help ensure Trump does.