Accessibility links
Jordan's Prime Minister Resigns Amid Protests Against Austerity : Parallels King Abdullah appointed economist Omar Razzaz as his new prime minister. It will be up to Razzaz to defuse a crisis over a plan that would levy income tax even on those earning $11,000 a year. 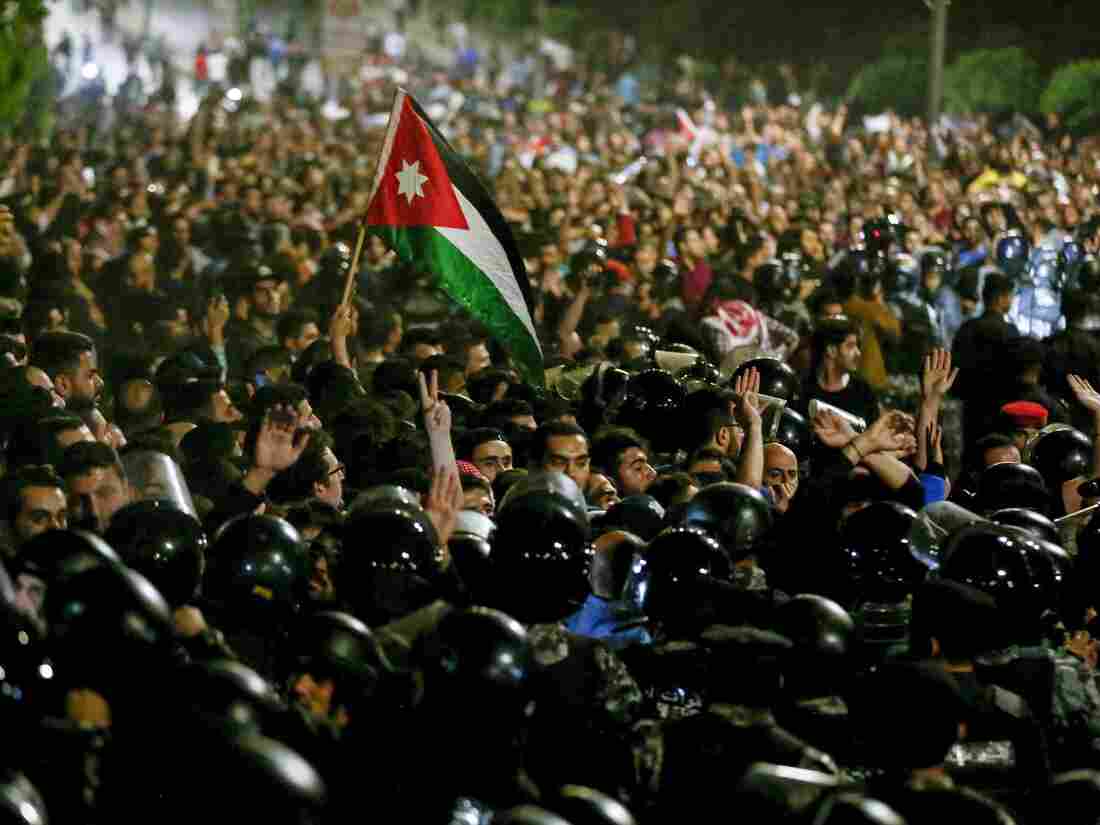 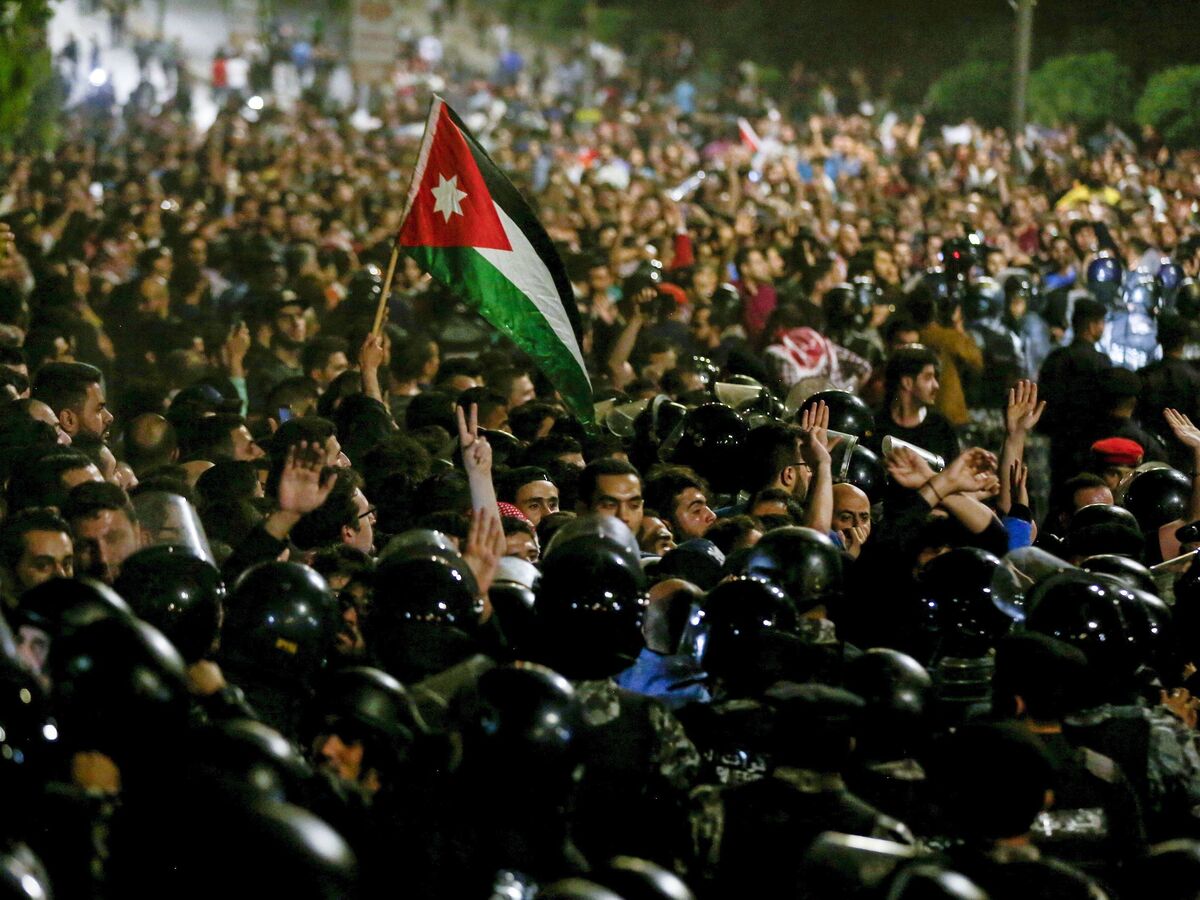 Protesters demonstrate outside the prime minister's office in Amman late on June 2, as security forces stand on alert.

The biggest protests in years in Jordan brought down the country's prime minister and his cabinet Monday.

After four nights of anti-government protests in Amman and other cities, Jordan's King Abdullah II summoned Prime Minister Hani al-Mulki to the palace, where Mulki tendered his resignation.

Jordan's education minister Omar Razzaz, a Harvard-educated economist, has been appointed the new prime minister and will name a new cabinet. It will be up to him to defuse a crisis over a tax plan — for Jordanians, the last straw in a long list of burdensome austerity measures imposed in the midst of the country's economic crisis.

Late Sunday and early into Monday, several thousand Jordanians took to the streets in Amman and other cities, blocking roads, burning tires and calling on the king to replace the government.

In Amman's upscale Shmeisani district, an estimated 2,000 protesters from all over the city gathered to try to make their way to the prime minister's office. Hundreds of riot police, arrayed in rows down the empty streets, blocked their way.

After continuous price hikes on everything from bread to electricity, protesters said a proposed law that would levy income tax even on those making as little as $11,000 a year had pushed them over the edge.

"This is the straw that broke the camel's back," said Hanadi Dweik, a children's tutor and former head of administration at a bank. She said even her middle-class family had trouble paying water and electricity bills.

"This government is leading the country to total chaos," she said. "They keep adding more taxes while we have no services. We don't even have a decent transportation system... It's enough. Enough is enough."

Amid the protests, Dweikh argued with police as they tried to force the crowd to move back. "We are doing this for you too," she shouted.

There were so many protesters on a nearby overpass that a police officer warned them via a bullhorn to come down before it collapsed.

One young man holding a Jordanian flag climbed a lamppost to take selfies above the crowd.

At least 40 people were reported to have been arrested at the protests in Amman and other cities. In central Amman, though, security officials went out of their way to tell people they were welcome to demonstrate peacefully. One handed out water to dehydrated protesters. Another helped an older protester cross the road.

The demonstrations were the biggest since the Arab Spring seven years ago, when people across the region demanded reform. Discontent in Jordan never quite boiled over during those protests as it did in other countries in the region.

Mohammad al-Hajaj, a 21-year-old university student, stood on a stone wall with his friends. Hajaj said he was studying in Turkey because it was cheaper than Jordan.

"The government is corrupt," he said. "They take in millions of dollars and where does it go?"

Another protester, Mouneer al-Nouri, held a sign written in six languages reading: "We have nothing."

He said these protests were different from others that have taken place in Jordan in recent years, organized by labor unions or political parties.

"If you notice," he says, "we are normal people — without any political background. We came here to say we want a better life."

Chants of "long live the king" made clear the protest was not directed at King Abdullah or at a monarchy intertwined with Jordanian identity.

"We love King Abdullah," said Shada al-Hindi, 26. "He is good, but the people around him are not good."

Hindi graduated from university two years ago with a degree in languages. She says she has been unable to find a job that pays more than $300 a month — not enough to live on in what has become one of the region's most expensive cities.

In a letter to Mulki on Monday, King Abdullah praised his former prime minister for "making difficult decisions that are unpopular" but "in the best interest of the nation" — an apparent reference to the proposed tax plan.

He said Jordan was facing unprecedented challenges. The country hosts more than a million Syrian refugees. Former donors — Saudi Arabia and the United Arab Emirates — have cut off aid to Jordan. And while the U.S. government is still a major donor to Jordan, a strong U.S. ally, the kingdom has been badly affected by the recent U.S. decision to move its embassy in Israel to the disputed city of Jerusalem.

A majority of Jordanians are of Palestinian origin, and the country's Hashemite monarchy remains custodian of Jerusalem's holiest Muslim sites.

The kingdom, one of the few in the Middle East with no oil, has turned to the International Monetary Fund to respond to its economic crisis, but must cut costs and raise revenue to get loans.

Razzaz, the new prime minister, has a reputation as a reformer and previously served at the World Bank. The head of Jordan's economic and social policy council, Mustafa Hamarneh, says the new government will have to make sure that citizens see the government is sharing the pain.

"I think they need to cut waste in government," said Hamarneh. "There is tremendous waste. I mean, our public officials drive Mercedes around. You need to cut that. You need to tighten the belt. There needs to be a general sense that it's equitable and it's fair and that everyone must pay a price to get out of our crisis. I think a progressive, proactive government can do that."

He said while Jordan's spending on services is relatively high, there is little to show for it.

"People take their kids from public schools to private schools," he said. "They go to private hospitals and private clinics. So you tax me and you don't provide services."

He said the proposed new taxes would also hurt companies, prompting some to lay off workers rather than creating jobs.

"It's not exclusively about the taxes. It's much more than that," he said. "It's about fairness. It's about stopping the mismanagement. We are worse off today than we were 10 years ago."