Accessibility links
Ireland Voted To Allow Abortion. But It's Still Strictly Banned In Northern Ireland : Parallels The recent abortion referendum in Ireland is setting off calls for change in neighboring Northern Ireland, which still has strict laws on the procedure that date to Victorian times. 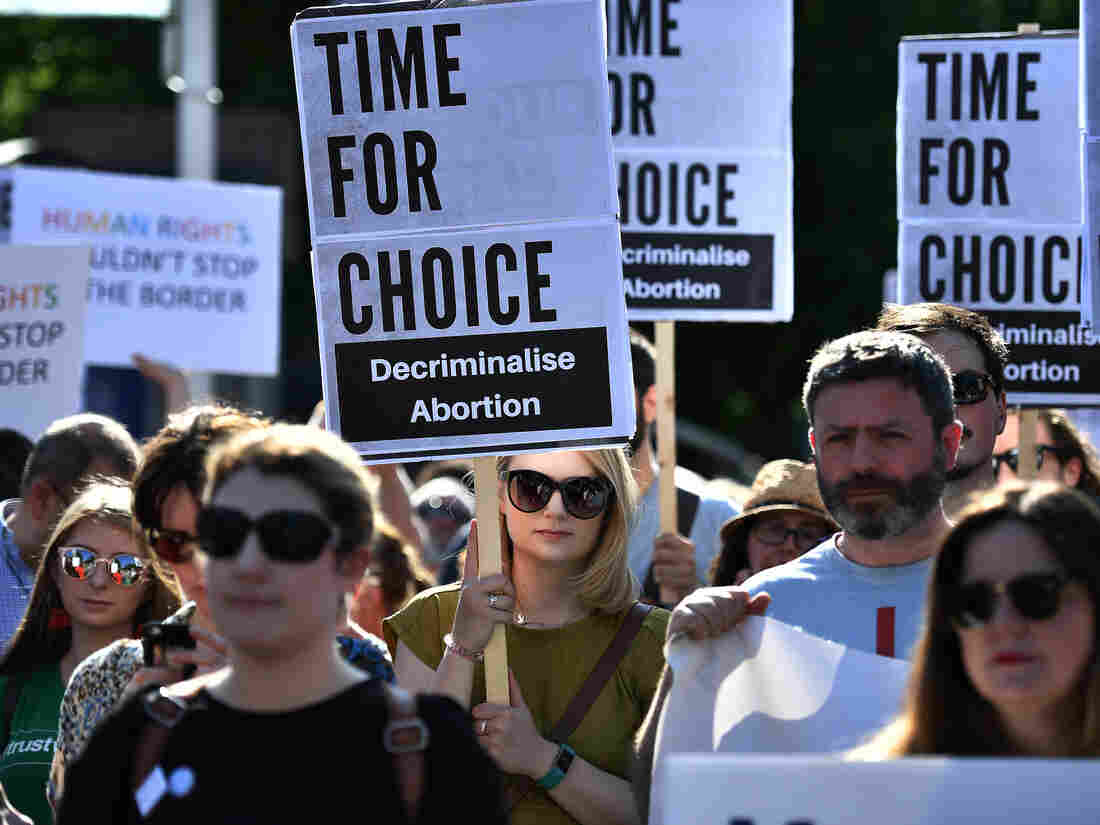 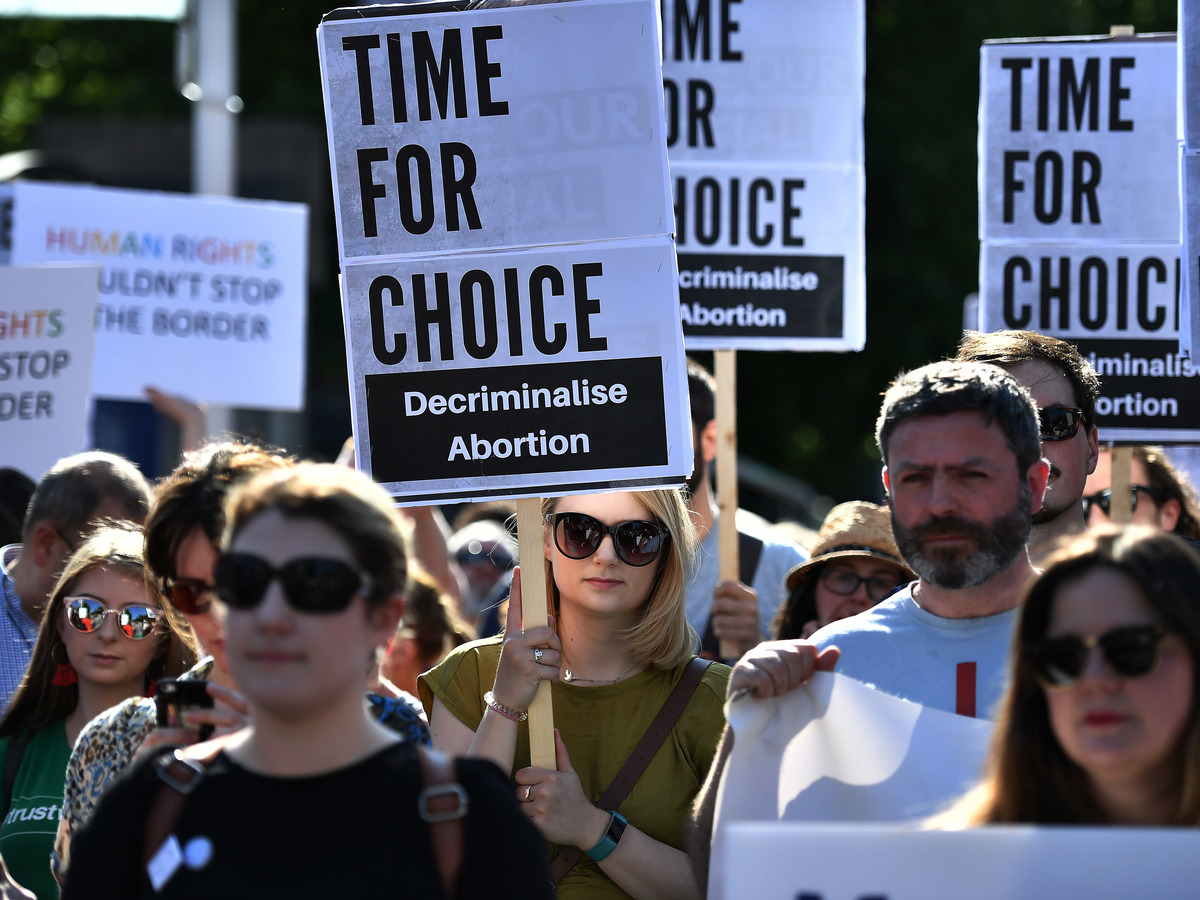 The recent vote in Ireland to repeal its abortion ban is setting off calls for change in neighboring Northern Ireland, which still has strict laws on the procedure that date to Victorian times.

But with no functioning government in Belfast, it would be up to the U.K. government of Prime Minister Theresa May to push through abortion reforms in British-ruled Northern Ireland.

The matter was before the House of Commons on Tuesday.

"I see abortion as an equalities issue," she added, "because men and women will never truly be free while one cannot control what happens to their own body."

She was leading off an at times emotional debate, in which one Conservative lawmaker even shared her own abortion story.

But lawmakers from Northern Ireland's Democratic Unionist Party strongly objected to Parliament intervening. "My party has been from its very inception a pro-life party," said the DUP's chief whip, Jeffrey Donaldson. "We believe law and policy in Northern Ireland should affirm and uphold the rights of both mothers and unborn children."

The debate in Parliament comes as abortion rights protests have ramped up in Northern Ireland. At a demonstration in a Belfast courthouse plaza last week, women chanted, "No more buses, trains or flights. We demand abortion rights."

Northern Ireland is the only place in the U.K. where abortion is still prohibited, even in cases of rape and incest, or when a fetus is not expected to live. Hundreds of women travel to England to obtain the procedure in any given year, or risk prosecution by using illegal pills that induce a miscarriage.

At the protest, remotely operated robots delivered the medicine to Belfast activist Eleanor Crossey-Malone and others who swallowed one pill of the typical two-drug abortion protocol in a symbolic challenge of the law.

"I've taken this in defiance of the extremely archaic, medieval, abortion laws that exist in Northern Ireland," said Crossey-Malone. "We will not accept being the last stronghold of anti-choice law and backwardness in the developed world." 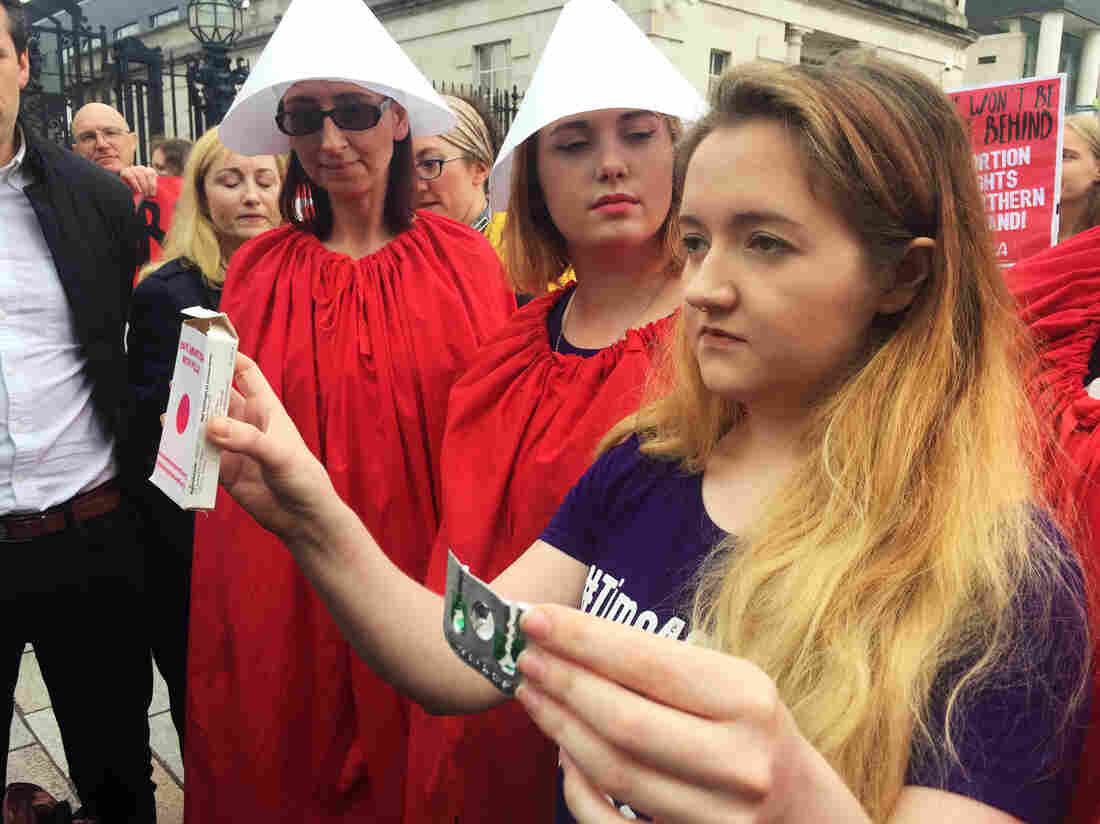 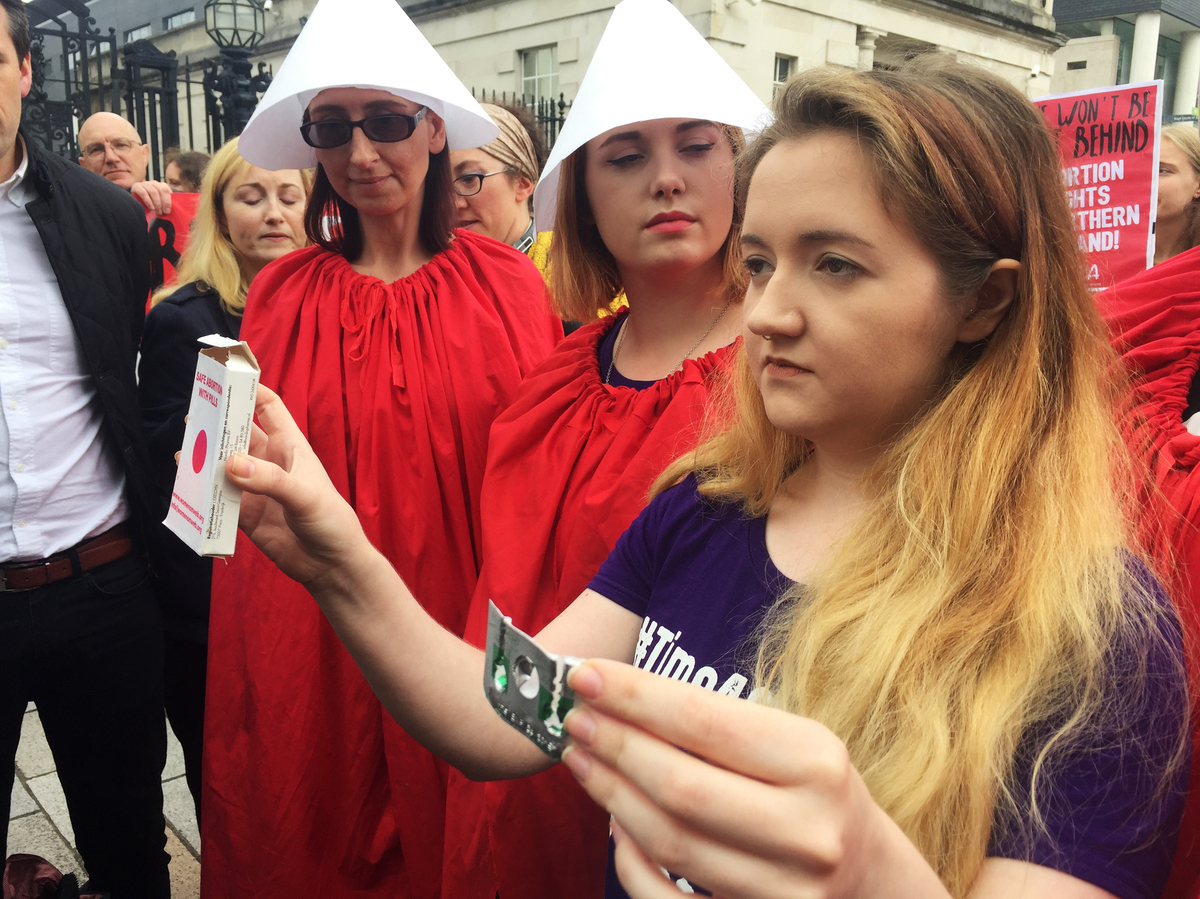 Activist Eleanor Crossey-Malone partakes in a demonstration in Belfast to legalize abortion in Northern Ireland.

Northern Ireland remains under the 1861 Offences against the Person Act, which criminalizes abortion except in cases where the woman's life is threatened. Women in England, Scotland and Wales were exempted from that by the 1967 Abortion Act, which legalized the procedure in most cases.

"We are calling on Theresa May to immediately extend the '67 Act in the wake of the repeal victory in the south," Crossey-Malone said. By the "south," she means the Republic of Ireland, where on May 25 a wide margin of voters chose to repeal the country's constitutional ban on abortion.

Police confiscated the abortion pills, and the robot that distributed them. Looking on, a woman called for police to arrest the women for breaking the law.

"As far as I'm concerned they're all just drug dealers," said Betty, who only wanted to be called by her first name because of the intensity of the debate here.

"There's plenty of contraception out there," she said. "Or just say no. You know, don't have sex if you don't want a baby." 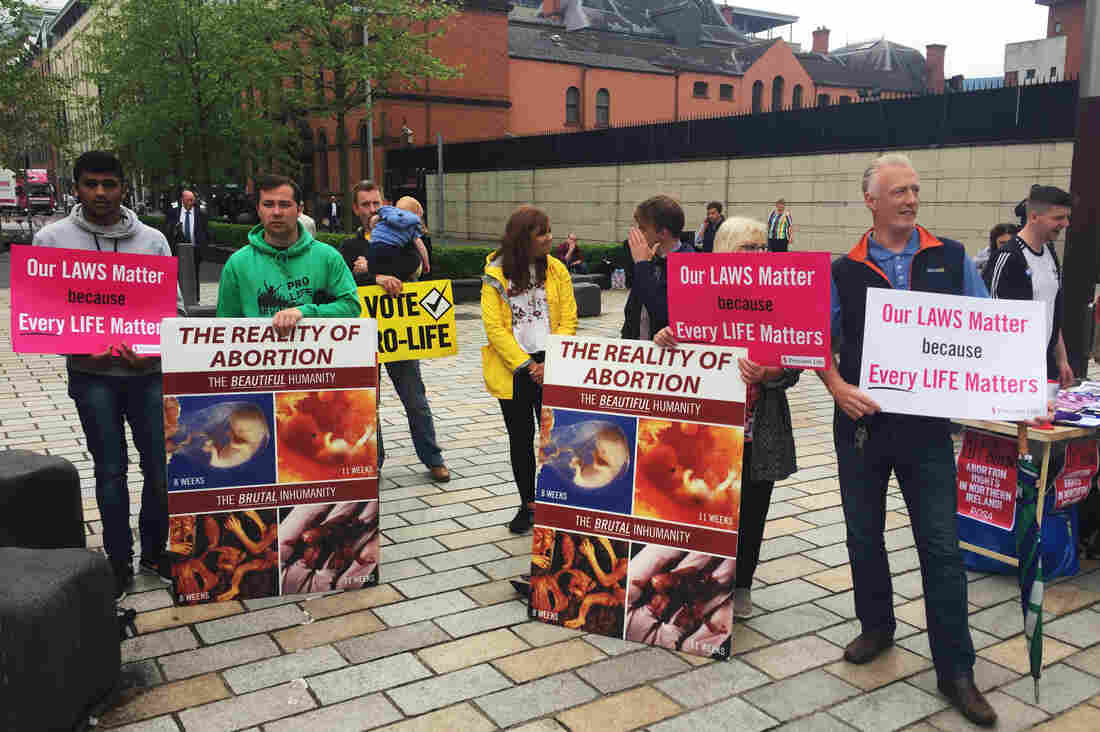 Anti-abortion groups stage a counterprotest in Belfast. Some of them are members of the group Precious Life. Debbie Elliot/NPR hide caption 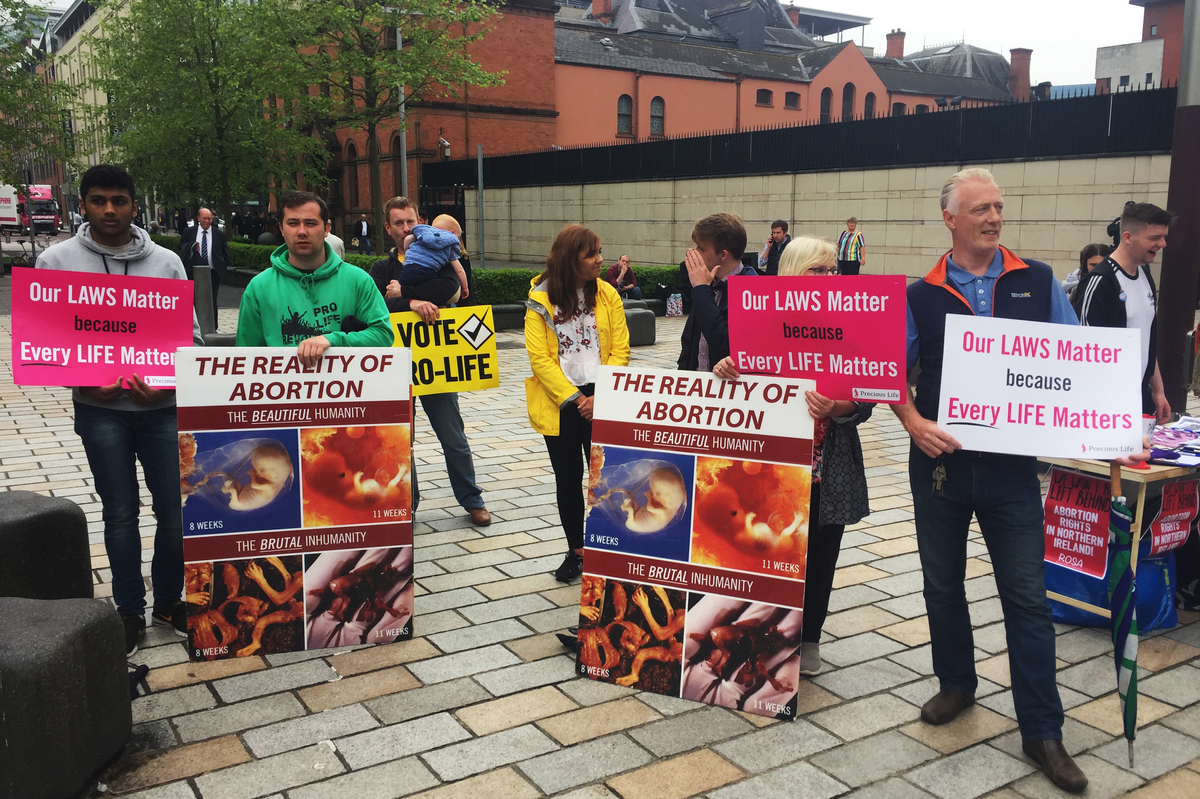 Anti-abortion groups stage a counterprotest in Belfast. Some of them are members of the group Precious Life.

Just as Ireland's vote last month has emboldened abortion rights activists to fight to change the law, it's also been a wake-up call for anti-abortion groups in the North.

"That is causing shockwaves," said Bernadette Smith, director of the group Precious Life. "We didn't expect the people of Ireland to vote in such large numbers to change the law, so that is concerning."

The group is organizing to fight any move in Parliament to change the law.

"You know it would be very unwise and it would be disgusting if the government railroaded over the democratic process and imposed legislation on another country," Smith said, referring to the possibility of legislators in London passing laws affecting Northern Ireland.

"We recognize there are strongly held views on all sides of the debate in Northern Ireland and that's why our focus is on restoring that democratically accountable, devolved government," May's office said after she met Monday with members of her own Conservative Party who are pushing for a vote in Parliament.

But the socially conservative Democratic Unionist Party in Northern Ireland is against liberalizing abortion laws. And May's minority government relies on the support of the party's lawmakers in Parliament.

On the other side, the nationalist party Sinn Féin favors liberalizing abortion laws, but is not keen on the U.K. Parliament making the change.

She says abortion rights should be seamless whether you live in Northern Ireland or the Republican of Ireland.

"We don't have the same rights as relatives who live in another jurisdiction," Ní Chuilín says. "It means that women in the north are going to face additional discrimination."

The Irish abortion referendum has people talking all over Northern Ireland.

In the northwestern city of Derry, along the border with Ireland, mother-of-three Amanda McGeoghan says it's time for a change.

"I'm hoping that it will come here and that people don't have to go to England and risk being arrested just to get their rights," says McGeoghan.

On a breezy afternoon near the River Foyle, an elderly couple, the Nesbitts from a town called Enniskillen, find themselves with opposing views.

"I think that a woman has a right to see to the needs of her own body in certain circumstances," says Norman Nesbitt.

On Thursday, the U.K.'s Supreme Court is expected to rule on a legal challenge brought by the Northern Ireland Human Rights Commission, an independent public agency, which argues the abortion law criminalizes vulnerable women and girls and subjects them to inhuman and degrading treatment in violation of the European Convention on Human Rights.