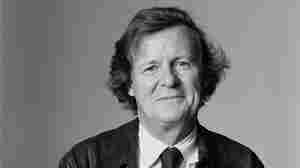 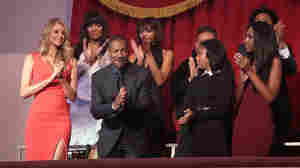 Surrounded by his children, Eddie Murphy is honored with the Mark Twain Prize for American Humor at the Kennedy Center for the Performing Arts on Sunday, in Washington. Owen Sweeney/Invision/AP hide caption

October 19, 2015 • The Kennedy Center presented the comedian with the Mark Twain Prize on Sunday. While honored, Murphy did jokingly point out one thing: "Usually when there's a prize, there's money." 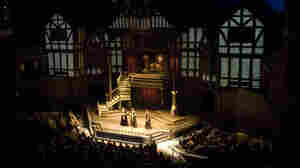 October 17, 2015 • Wherefore art "thou"? Why not "you" instead? The Oregon Shakespeare Festival is making an ambitious — and controversial — attempt to rewrite the Bard's plays into modern-day English. 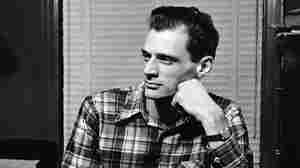 Playwright Arthur Miller sits at his typewriter in New York City in 1949, the same year he won the Pulitzer Prize for drama for Death of a Salesman. AP hide caption

October 17, 2015 • The great American playwright was born a century ago Saturday. An activist as much as he was a writer, Miller challenged social ills in playscripts — and set a new standard for the citizen-artist. 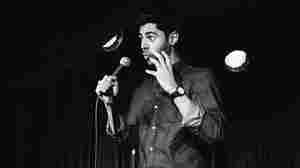 October 14, 2015 • Homecoming King is the comedian's absorbing tale about the first-generation American experience and the NBA (New Brown America). 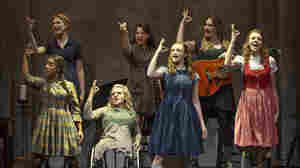 In the new Deaf West production of Spring Awakening, the deaf lead actors have doubles in the background who speak and sing for them, and everyone signs. Joan Marcus hide caption

October 13, 2015 • The hit musical only closed six years ago, and now it's back, in a well-reviewed revival featuring hearing and deaf actors, who sing and sign during the performance. 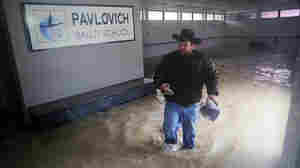 Pictured is the inside of the Pavlovich Ballet School Building, home of the Columbia Classical Ballet, as electrical crews shut off power Monday, in Columbia, S.C. Gerry Melendez/The State/TNS/Landov hide caption

October 6, 2015 • The South Carolina flood has left the Columbia Classical Ballet Company without not just its costumes and scores but its building. 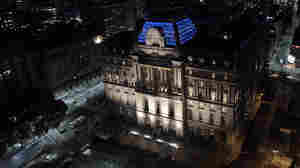 Everything at the brand new Cultural Center in downtown Buenos Aires is free — from art installations to symphony concerts. "Culture is an investment for this government, not an expense," says Culture Minister Teresa Parodi. Centro Cultural Kirchner hide caption

October 3, 2015 • Argentina's newest tourist attraction is housed in a repurposed century-old Beaux Arts Central Post Office building. The Centro Cultural Kirchner is one of the largest cultural centers in the world. 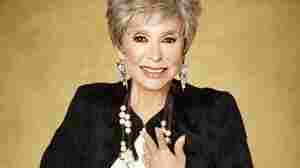 October 1, 2015 • The iconic actress and singer joins Alt.Latino to discuss the life of a Latina in Hollywood, as well as what the original West Side Story lyrics said. 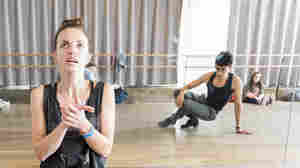 Tap dancer and choreographer Michelle Dorrance is the founder and artistic director of Dorrance Dance/New York. She has been dancing since she was 4. Christopher Lane/John D. & Catherine T. MacArthur Foundation hide caption

September 29, 2015 • Dorrance was awarded a MacArthur Fellowship on Tuesday. For her, tap dance is the ultimate art form. "To be able to be a dancer and a musician at the same time — there's nothing like it," she says.

September 28, 2015 • The Oscar-winning actress plays Antigone in a new translation of Sophocles' 2,000-year-old tragedy. "It's a very powerful play," Binoche says. Sophocles "still is bringing so much truth in our lives." 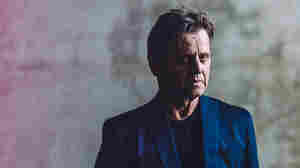 Dancer Mikhail Baryshnikov poses for a portrait at the Baryshnikov Arts Center in New York City in July. The center, a multidisciplinary practice and performance space, opened in 2005. Bryan Derballa for NPR hide caption

September 28, 2015 • You'd think the sign in front of dancer Mikhail Baryshnikov's arts center would have his name in lights — but actually, you can barely see it. He says what happens inside is way more important. 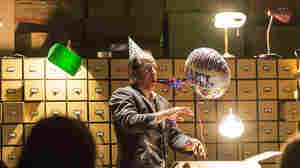 Actor and illustionist Geoff Sobelle calls his one-man show The Object Lesson a "meditation on our relationship to things, and to objects and stuff." Craig Schwartz/Courtesy of The Center Theatre Group hide caption

Out Of 'The Object Lesson,' An Education In The Power Of Kept Things

September 27, 2015 • Geoff Sobelle calls his new one-man play "a meditation on our relationship to things." On a visit to the show, NPR's Arun Rath gathers a lesson in the meaning of stuff -- and the memories it can bear.

Out Of 'The Object Lesson,' An Education In The Power Of Kept Things

For Opera Powerhouse Dolora Zajick, 'Singing Is Connected To The Body'

September 25, 2015 • The mezzo-soprano discovered opera as a 22-year-old pre-med student. She took "a crack at a singing career" and has been at the Metropolitan Opera for 25 years. Originally broadcast March 14, 2014.

For Opera Powerhouse Dolora Zajick, 'Singing Is Connected To The Body' 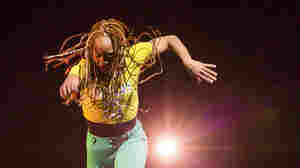