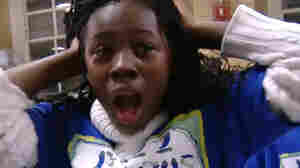 A PS22 Chorus member reacts to news that their glee club will perform at the Academy Awards. YouTube.com hide caption

February 26, 2011 • The Academy Award show is Sunday night, and excitement is growing. There is one group performing you've probably never heard of: The PS22 Chorus, a fifth-grade glee club from Staten Island.

February 25, 2011 • As a look ahead to Sunday's 83 Annual Academy Awards, Tell Me More asks previous Oscar winners to open their music files and share what's playing in their ear. Academy Award-winning actress Marlee Matlin opens up about the tunes that inspire her. Matlin, who is deaf, won a 1986 Oscar for the film, "Children of a Lesser God." (She shares her music favorites with assistance from a sign language interpreter.) 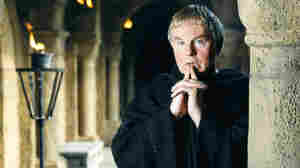 Derek Jacobi, From Shakespeare To Slapstick

February 20, 2011 • Derek Jacobi is one of Great Britain's leading actors, with decades of work for film, TV and the stage. He plays the Archbishop of Canterbury in the Oscar-nominated drama The King's Speech. And his latest stage triumph is an award-winning London King Lear that's headed for the U.S.

Derek Jacobi, From Shakespeare To Slapstick 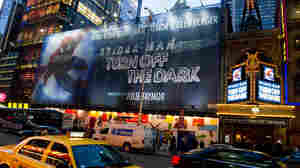 Routing the supervillains? Most reviewers may have been as aggrieved as the Green Goblin, but Spider-Man snared a substantial audience last week nonetheless. Charles Sykes/AP hide caption

February 16, 2011 • Need more proof that nobody listens to critics? Both attendance and box-office figures were up in the week after reviewers went all Doc Oc on the Julie Taymor extravaganza.

February 16, 2011 • They have performed in 48 states and 71 countries, for more than 20 million people. The Alvin Ailey American Dance Theater started as a small group of black dancers and today is an internationally renowned powerhouse of talent. In July, a new artistic director will lead the New York-based company, succeeding dance legend Judith Jamison. As part of a special Tell Me More broadcast from the Big Apple, host Michel Martin speaks with choreographer and artist-in-residence, Robert Battle, about his new role and vision for the company.

Broadway's 'Spider-Man' Is All About Superlatives

February 14, 2011 • The musical Spider-Man: Turn Off The Dark is the most expensive musical ever, logged the most preview performances, the most injuries to cast members and the most negative reviews before the show officially opens. Audiences, however, are paying premium ticket prices and packing every performance.

Broadway's 'Spider-Man' Is All About Superlatives

Harlem's Apollo Theater Gets Its Own Show

February 13, 2011 • The improbable story of the Apollo Theater in Harlem is the subject of a new museum exhibit in New York City. The show, designed by the Smithsonian, looks at how an all-white burlesque theater became the cultural center of African-American showmanship.

Harlem's Apollo Theater Gets Its Own Show 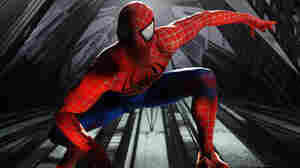 February 11, 2011 • NPR's Bob Mondello reviews Julie Taymor's much-criticized $65 million Broadway epic — and while it's not so good, it's not as bad as you might have heard. With a few changes (and a whole lot of cutting down), it might even be fun when it finally gets its official opening night. 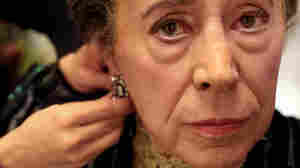 February 5, 2011 • As one of the finest classical actors of his generation, Brian Bedford has donned all manner of period costumes. These days he's wearing ladies' stockings – and playing Oscar Wilde's imperious Lady Bracknell in a Broadway revival that has critics in stitches. 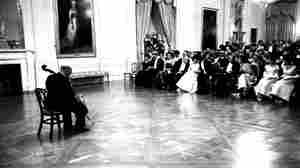 In the first year of John F. Kennedy's administration, cellist Pablo Casals famously performed "The Song of the Birds," a traditional Spanish folk melody that had long been his signature. He told Kennedy it symbolized his hopes for freedom and peace in the world. Cecil Stoughton/John F. Kennedy Presidential Library hide caption

January 25, 2011 • John F. Kennedy helped boost American interest in the arts when he asked poet laureate Robert Frost to speak at his inauguration 50 years ago this month — and soon after asked cellist Pablo Casals to play the White House. Now, the Kennedy Center honors that legacy with a star-studded arts festival. 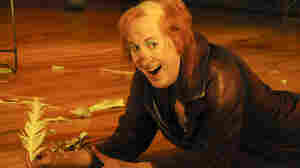 As the star of The Diary of a Madman, Geoffrey Rush discovered threads of modern absurdism in Nikolai Gogol's writing. Heidrun Lohr/Brooklyn Academy of Music hide caption

Budget Crisis Forces Classical Music Out Of Its Box

January 18, 2011 • In major U.S cities, symphony orchestras face financial problems. But there are bright notes in dark times. For example, the Metropolitan Opera has begun live broadcasts of its operas in movie theaters around the world.

Budget Crisis Forces Classical Music Out Of Its Box

January 16, 2011 • Shirley Jones is probably best known, at least to a certain generation, for her role as Shirley Partridge. Host Liane Hansen interviews the actress and singer, who recently released her newest album, a tribute to her early champion Richard Rodgers.

Spiderman Takes A Time-Out Before Broadway

January 15, 2011 • The Broadway production of Spiderman can't seem to get on its eight legs. Opening night has been pushed back to March, producers said, "to allow for more time to fine-tune aspects of the show."

Spiderman Takes A Time-Out Before Broadway