Looking Back on Caldwell's Operatic Career

March 30, 2006 • American opera visionary Sarah Caldwell founded the Opera Company of Boston in 1958. The company's principal prima donna was Beverly Sills, and Placido Domingo was an unknown young tenor when he first sang with the company. Caldwell died on March 23 at the age of 82.

Looking Back on Caldwell's Operatic Career

March 30, 2006 • The state of Louisiana is creating a new agency to market its music to the world. Some think it's a great way to get musicians back on their feet after Hurricane Katrina. Others say that many of those same musicians have no home to come back to, and that these basic needs should be the state's first priority. Reporter Eve Troeh reports.

March 28, 2006 • Singer/songwriter Neko Case possesses one of the most distinctive voices in modern music. Some writers are already predicting that her latest, Fox Confessor Brings the Flood, will end up one of the year's best. In a recent interview, Neko Case sang, played her guitar and spoke about her music with music journalist Ashley Kahn. 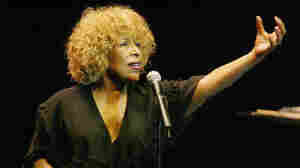 Flack says musicians should practice humility: "Don't wave [others' music] off 'cause you dont understand it. Listen for the heartbeat. It's there." Rafa Rivas/AFP/Getty Images hide caption

March 25, 2006 • The unmistakable voice of Roberta Flack has been part of the American soundtrack since the 1960s.

March 24, 2006 • A bold new interpretation of Richard Wagner's Ring cycle sets its timeless tale of the corruption of power in a more contemporary American setting. Director Francesca Zambello talks about what's being called the American Ring.

Dave Chappelle, Back in the Spotlight

March 24, 2006 • Dave Chappelle may be the hottest comic on the block. He has a new documentary in theaters, a hip-hop concert film called Block Party. He's still doing stand-up. And DVDs of his cable TV show are selling at a fast pace.

Dave Chappelle, Back in the Spotlight

Songwriter Al Anderson Returns to his Roots as a Performer

March 21, 2006 • Music journalist Ashley Kahn talks with guitarist and songwriter Al Anderson about his new album, After Hours. Anderson has been in the music business for four decades. He has written a string of country hits for Nashville's biggest stars. Despite his success as a songwriter, Anderson says the urge to perform again has proved too strong to resist.

Songwriter Al Anderson Returns to his Roots as a Performer

March 20, 2006 • The music of Frank Loesser has been celebrated and extended by his wife, Jo Sullivan Loesser, since his death in 1969. But her musical relationship with him began earlier, as she starred in the original production of Loesser's The Most Happy Fella.

March 20, 2006 • Singer, musician and folklorist Mick Moloney's new album, McNally's Row of Flats, centers on theater songs by an Irish songwriting team from the late 1800s. In those days, Vaudeville and minstrelsy were giving way to American Musical Theater in New York City.

March 20, 2006 • Ed Gordon talks with veteran comedian and entertainer Steve Harvey about his illustrious career in stand-up comedy, radio and film. He has a new movie out, Don't Trip, He Ain't Through With Me Yet!

Actress Sarah Jones on the 'Bridge and Tunnel'

March 20, 2006 • Ed Gordon talks with poet and actress Sarah Jones about her one-woman Broadway play, Bridge and Tunnel, in which she plays 14 different characters.

Actress Sarah Jones on the 'Bridge and Tunnel'

March 18, 2006 • The concert movie is back: Note Dave Chappelle's Block Party and Neil Young: Heart of Gold. Film commentator Elvis Mitchell says the films stand up well to classics such as Woodstock.

March 18, 2006 • Singer Isaac Hayes, who for years lent his mellow voice to the South Park character Chef, has quit the raucous Comedy Central cartoon after an episode that lampooned Scientology. Hayes is a Scientologist.

'Lord of the Rings' Takes the Stage

March 17, 2006 • After proving immensely popular on page and screen, The Lord of the Rings is about to take another leap. When J.R.R. Tolkien's epic trilogy of fantasy novels makes its debut as a stage production in Toronto, audiences will hear Hobbits and elves sing. Just don't call it a musical, its producer says.

'Lord of the Rings' Takes the Stage

March 15, 2006 • A new show that has opened in South Korea, Yodok Story, takes on an unlikely topic for a musical: prison camps in Stalinist North Korea. The director and choreographer are North Korean -- and both were once prisoners in the vast gulag system that holds an estimated 200,000 people.