Accessibility links
The Oxford Project : The Picture Show Imagine photographing every member of your community. How long would it take? Days? Weeks? Years? It wouldn't be easy. Which is why Peter Feldstein is one of the few people — if not the sole person — to have done it. In 1984, he set up a small s...

Imagine photographing every member of your community. How long would it take? Days? Weeks? Years? It wouldn't be easy. Which is why Peter Feldstein is one of the few people — if not the sole person — to have done it. In 1984, he set up a small studio in his town of Oxford, Iowa (population 676), and, with a fat red marker, made a sign that said "Free Pictures." He taped it to a storefront on Augusta Avenue, Oxford's main street, and waited.

Twenty years later, Feldstein did it again. While many of Oxford's residents had moved or passed away, a great number were still there. And this time they did more than just pose for a photograph; they shared their life stories with writer Stephen G. Bloom. The photographs and stories have been compiled in a book called The Oxford Project, recent winner of ALA's Alex Award and recipient of the Gold Medal in the Independent Publisher's Outstanding Books of the Year for Most Original Concept.

"Oxford's still the kind of place," reads the introduction, "where drivers don't put on their turn signals because everyone knows where everyone else is going. Almost everyone's phone number starts with the same prefix (828). Dinner and supper are two different meals. Everybody knows what a mudroom is — and has one. The word elevator more commonly refers to a device that raises and lowers grain, not people."

There's John Horn, the rugged buckskinner turned Protestant minister. And Brianne Leckness, who was abandoned by her mother as a baby and spent her life between families. "Nothing for me has been normal," she says, "so why should now be normal?" As a baby, Ben Stoker was held by his father for his portrait. Twenty years later, both of his parents have passed away.

"A lot of people don't like small towns because they're so tight-knit. But that's what makes this place so great. You know who's sleeping with whom, but when your mother dies, you also know there'll be 28 people at your door with casseroles." 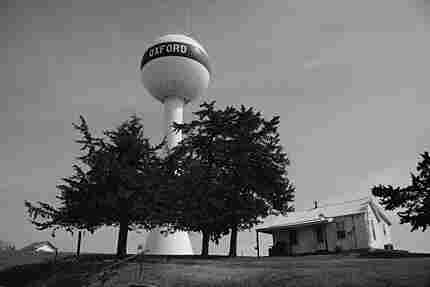 What's most amazing is how, 20 years later, many of the Oxford residents pose in exactly the same way. It's proof that although they've changed physically, their habits are much the same. In both photos, Linda Cox stands with her feet together, her left hand holding her right wrist, head tilted slightly to the left. Carol Ann Hebl's body is twice turned slightly to the right, as she holds two fingers with her right hand — which now has a wedding ring on it. Vince Grabin is still wearing a cowboy hat, and so are his brothers.

The passage of time takes its toll. Life transforms us. In addition to inexorable signs of aging, our appearances change because of large and small tragedies. ... Electric smiles have ripened into middle-aged frowns. Full heads of hair are now thin and gray. But in these time-lapse photographs, there are also Oxford men and women who have blossomed, just coming into their own. Some sparkle with possibility and exuberance.

At the end of nearly 300 pages, the residents of Oxford will feel like your own neighbors. They all have idiosyncrasies and stories both funny and sad, told with complete candidness. At first it seems surprising that they would share their stories and secrets so openly with strangers. But most were happy to talk because Feldstein and Bloom were the first to listen. The result is a personal and touching portrait not only of a specific Midwestern town, but also of the general American spirit: tired, perhaps, but still smiling.

Listen to an interview with the book's creators, on WLIU's In The Morning With Bonnie Grace:

Additionally, the American Place Theater will transform The Oxford Project into a theatrical event. The show will be at 7 p.m. Sunday at St. Clement's Church, 423 W. 46th St., New York. To see more photos and stories from The Oxford Project, check out the Web site.