Accessibility links
Dennis Stock's Woodstock Generation : The Picture Show By Claire O'NeillDennis Stock is a living testament to the fact that dropping out of school may not be the worst idea. Still sharp as a tack at 81 — maybe even sharper — he says euphemistically, "Formal education is not my cup of tea." In his ...

Dennis Stock is a living testament to the fact that dropping out of school may not be the worst idea. Still sharp as a tack at 81 — maybe even sharper — he says euphemistically, "Formal education is not my cup of tea." In his youth, he probably wasn't even the tea-drinking type. Stock's idea of rejuvenation involved road trips, camp-outs, cultural immersion and long-term photo essays for Life and other publications. Nowadays, his archive is a treasure trove to the Americana-loving historian. And it's largely because he had the guts to quit school and hit the road. In the late 1960s, he was photographing the Woodstock Generation, but he was also one of its free-spirited, anarchistic exemplars.

A collection of Stock's photographs from the late '60s is now on display in his hometown, at the Center for Photography at Woodstock in New York. It's a timely exhibit, coinciding with the free-loving festival's 40th anniversary this month, and it was also a good excuse to get the renowned Magnum photographer on the phone.

In workshops and lessons, Stock teaches what he calls the "articulate image" — that is, an image that conveys the "essence of a situation." He's certainly more comfortable explaining what makes a good photograph than, say, his infamously taciturn predecessor Henri Cartier-Bresson, who influenced nearly every photographer in the late 20th century but refused to admit it.

It seems that there's an inherent intuition to great photographers — something that cannot be taught, and something that Stock just has. There are a few photos I've encountered in life, for example, that have really resonated — images that, for whatever reason, I cannot get out of my mind. And one of them is Stock's Venice Beach Rock Festival, 1968. 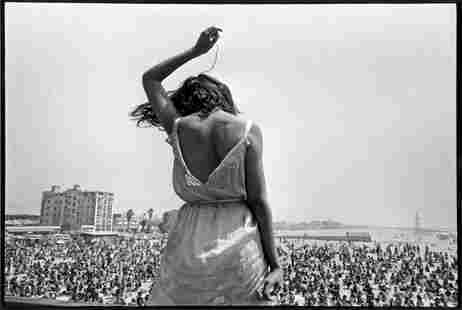 It was taken, as the title says, at a rock festival in California, when a girl jumped in front of Stock's camera on stage. It was a fleeting, accidental moment, and yet the photo itself is timeless. Perhaps it's because Stock was both curious about and accepting of his (counter) culture that, when it comes to articulate images, his are some of the most eloquent. If there's one lesson to be learned from Stock, it has nothing to do with composition or lighting or f-stops — it's about being adventurous and observant and, heaven forbid, maybe even a bit rebellious.