Two weeks ago we saw what New York Harbor would have looked like way back in Henry Hudson's day. Now fast-forward to see how time has rendered that lush landscape in steel and concrete. The Edge of New York: Waterfront Photographs, an exhibition currently at the Museum of the City of New York, shows the ever-evolving landscape of New York's urban coast, with both historical images and the work of contemporary landscape photographers Diane Cook and Len Jenshel.

Cook and Jenshel's project, several years in the making, is about "the confluence of recreation and commerce, development and conservation, nature and architecture," as Jenshel put it. They were granted special access to areas previously restricted along the waterfront, bringing a rarely seen part of the city to public attention. Over the course of just a few years, they've documented many parts of the waterfront evolving from post-industrial banks to recreational hot spots, although much of it remains in disrepair. 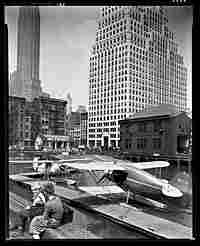 Cook works almost exclusively in black and white and Jenshel does color, but somehow the alternating rhythm works. Studying with the likes of Garry Winogrand, Jenshel was one of those first photographic rebels to decide that color had a place in fine art photography in the 1970s. Cook, on the other hand, got her start in painting and sculpture before an internship with esteemed photographer Larry Fink. Together they are two of the foremost living fine art photographers, still working in medium format film and frequently crossing over into commercial work.

Learn more about the exhibition, which will run through November 29, on the museum's Web site. And be sure to check out the photographers' site.