Accessibility links
A Lifetime Safari For Two : The Picture Show Dereck and Beverly Joubert have spent the past five years in the wilds of Botswana photographing a leopard named Legadema. They are wildlife conservationists and no, they don't get bored.

Listen
A Lifetime Safari For Two

It's hard to imagine two people spending 20 years in the middle of nowhere and not getting sick of each other. Dereck and Beverly Joubert are Emmy Award-winning filmmakers, photographers and conservationists based in Botswana. To an outsider, one of their most impressive accomplishments is simply surviving each other. Ask them about it, though, and they don't seem at all fazed. The Jouberts have a greater cause to keep them energized. No, they don't get bored; they wouldn't live any other way.

As National Geographic explorers-in-residence, the Jouberts have devoted their conservation efforts to big cats. For their most recent project, they followed one leopard for nearly five years, from her infancy to her motherhood. Her name, Legadema, means "light from the sky" in Tswana (good luck pronouncing it). She was named after a lightning storm, during which she sought comfort by the Jouberts' truck.

Over the phone from an edit studio in South Africa, the Jouberts explained how it's possible to live so close to an animal without intervening:

"The non-intervention is purely because we want to be able to understand these animals in a way that [will help] them survive in the future. ... What we are out there to do is to hopefully show people how similar we are to animals, and how these wilderness areas are so precious." 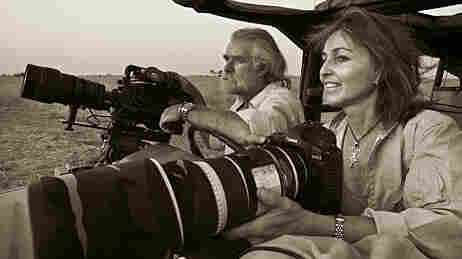 Dereck and Beverly Joubert with a 600 mm lens. hide caption

The photographs from this most recent project have been compiled in a book called Eye of the Leopard, released yesterday. Supplemented by a corresponding film, the images are meant to provoke readers to protect the swiftly diminishing big cat populations. With the help of National Geographic, the Jouberts have also spearheaded the Big Cat Initiative, a global conservation effort.

Beverly Joubert explained that leopards are special in that, unlike lions, they are incredibly solitary creatures. Perhaps the Jouberts' photographs are resonant because they share this affinity with leopards: a comfort with solitude and a proximity to nature.

Hear the Jouberts talk about the book:

Photos by Dereck and Beverly Joubert, from Eye of the Leopard, courtesy of Rizzoli New York, 2009.