Accessibility links
Meet The Next Best Street Photographer: Google : The Picture Show Has Google joined the ranks of the best street photographers? Jon Rafman might argue so, and he has a collection of Google Street View photos to make the case.

Has Google joined the ranks of Robert Frank and Helen Levitt? Can Google capture what Cartier-Bresson referred to as the "decisive moment"? Does Google have the cool, objective perspective that photojournalists strive to attain? Jon Rafman might argue so. By scouring the street view offered by Google Maps, he has culled dozens of image that Google can add to its art portfolio.

In 2007, Google dispatched a fleet of cars — each one bearing a pole with nine cameras — with the goal of documenting the streets of the world. The images taken by these cameras have been available on Google Maps for a while, but Rafman took it upon himself to find the views worth looking at.

"This very way of recording our world," he wrote in a recent article, "this tension between an automated camera and a human who seeks meaning, reflects our modern experience." Of course the Google camera is completely indifferent to what it sees — which makes its fleeting images of burning houses or stolen kisses all the more intriguing.

Surprisingly, Rafman remarked, the Google car was met with delight as much as it was with dismay, which may be a testament to our time: we've become habituated to lost privacy and heightened surveillance — sometimes we even welcome it. Here's NPR; what does your street view look like? Upload it to our Flickr group pool. 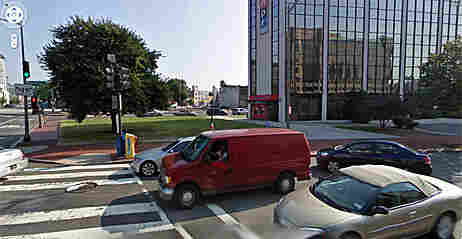