Accessibility links
Extreme Bird-Watching From Tundra To Swamp : The Picture Show Photographer Theodore Cross has elevated the sport of birdwatching: he's been traveling the world and photographing waterbirds for nearly 40 years. Now, at the age of eighty-five, he's published his collection in a new book.

"It's like a disease, I suppose," says bird photographer Theodore Cross in an interview with NPR's Melissa Block. "Except for my family and friends, there are few things I care more about." He is talking about his love for waterbirds — a love that has taken him to four continents, from the Canadian Arctic to the Russian Far East tundra to Texas lagoons, over the course of nearly 40 years.

Cross is now 85 years old, but his love for birds came mid-life. He has had a long career in law and publishing — and is an expert on economic development. But birds are his passion.

"This is the book John James Audubon would have made if he had used a camera," reads the jacket to Cross' new book, Waterbirds. And it's true. This collection of 179 color photographs is an ornithologist's dream. But Cross' interests are more specific: He's drawn to birds that exist in and around water — especially the birds known for incredible migrations. "It's the courage of these guys that appeals to me tremendously," he says in the interview. 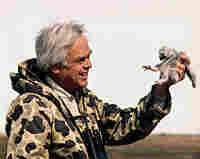 Cross was born during the Coolidge administration and fought during World War II. At the time, he says, "There were millions of birds around me all the time, and I didn't notice them ... At wartime, you have other things to notice — like being seasick or having some terrible disease in your armpit." But he does recall certain things — like the Marines' beloved white tern, famous for laying its eggs on barracks and gun emplacements. Perhaps because of subconscious memories like these, Cross eventually developed an affinity for waterbirds. "Whammo! Twenty years later ... they became a very important part of my life."

It makes sense that a former naval officer would be drawn to these aquatic creatures — water-loving but also possessing incredible stamina and strength. Cross has, for example, traveled to Texas' Laguna Madre for 30 consecutive years to capture the beautiful reddish egret.

He writes in the book's preface: "In my mind, I visit these islands almost every day. The memories of them help me accept the brevity of the time that lies ahead."