Accessibility links
Crayons And Choice: A Headache In 120 Colors : The Picture Show It's hard to make choices because our brains get tired, and yet we have more and more and more choices all the time. For example, how are we supposed to choose from 120 different crayon color options?

Crayons And Choice: A Headache In 120 Colors

Crayons And Choice: A Headache In 120 Colors

Our subject this Tuesday morning (check out Radiolab's monthly appearance on Morning Edition): For most of us, it's hard to make choices.

Because our brains get tired.

This graph traces the increase in Crayola options from 1903 to 2010: 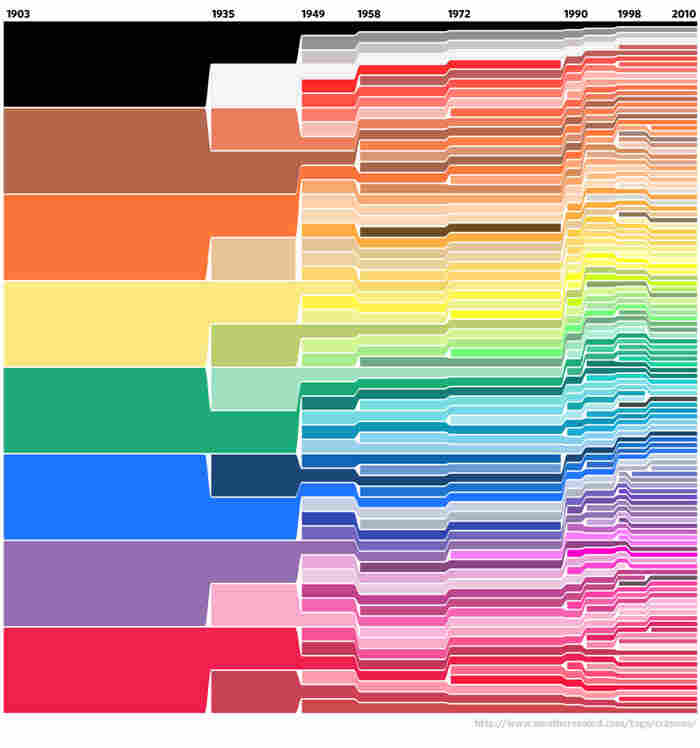 Some colors -- Green Blue, Maize, Lemon Yellow, Raw Umber -- didn't last and were retired. But more -- Razzle Dazzle Rose, Unmellow Yellow, Mango Tango, Neon Carrot, Electric Lime -- have been added. So if you do the math (and the ever-so-geeky Velo did) we have what is called Crayola's Law, which states:

The number of Crayola colors doubles every 28 years.

By that logic, (a multiplication rate of 2.56 percent a year) by 2050, your toddlers will be presented with a Crayola box the size of a blimp, containing 330 crayons. And when they want yellow, they will need a half-hour (or a Valium) to figure out which yellow.

Is this what we asked for?

On the other hand, for any of you out there who are crayon sluts (as opposed to crayon cringers)...

...you might want to spend a little time with Christian Faur, an artist who is so in love with crayons he proclaims: "For this body of work I have assembled more than 100,000 hand cast crayons of varying colors and shades [ed.: sorry Crayola!] to produce a body of work that, to the best of knowledge, is unlike anything done before in art."

Unlike anything done before in art? Come on. Who'd dare make a statement like that? Well, if you think photolike portraits of young children composed of tens of thousands of individually stacked crayon tips -- actual crayon tips carefully placed one on top of the other -- is something new under the sun, then yes, this is different. But you decide.

Special thanks to Stephen Von Worley's wonderful blog, Weather Sealed, and to Velo -- whoever he may be -- (it is a "he") without whom Crayola's metastasis would have been less colorful. And, of course, to Radiolab, where Jad Abumrad and I devoted a whole hour to the subject of "Choice."