Accessibility links
Time Travel On The Cheap : The Picture Show Have you ever wished you could time travel? Now you can! Kind of.

Time Travel On The Cheap

Time Travel On The Cheap

How many times have I wandered into a room and wondered what was it like right here, right where I'm standing, 50 years ago? 70 years ago? 100 years ago?

Somebody knows. Among the hundreds of millions of old photos crammed into shoe boxes and albums, somebody somewhere has an old photo of this very room.

And if by some magic I could fetch that photo, I could hold it in front of me and see the Room That Was while standing in the Room That Is. With a flick of my eye I could travel across time from now to then. This is time travel on the cheap. Here's an outdoor version: 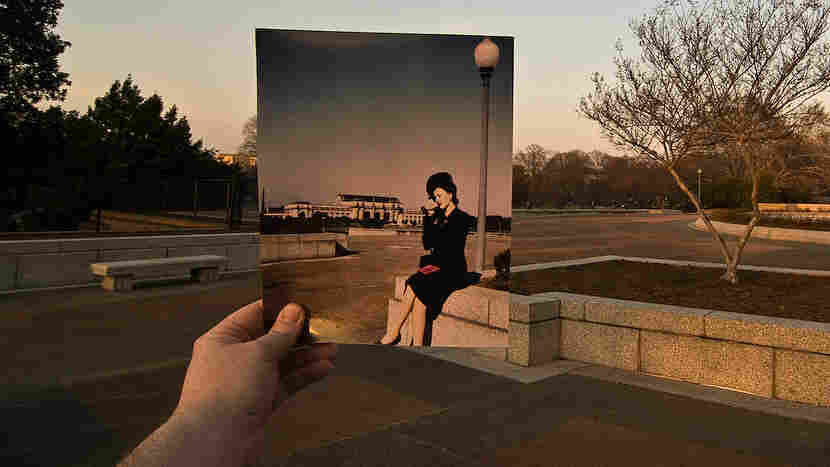 This shot of a lady sassily smoking a cigarette at Union Station in D.C. was taken in the 1940s. It will be two, three decades before the surgeon general tells her she's gotta give it up.

There are more photos, which a guy called "edrabbit" on Flickr assembled in a gallery. "Ed" (whom I have never met — he seems to be a photographer) has invited folks to pose their old photos in their original settings. Here are some more:

I especially like that woman taking her pet rabbit out for a walk in D.C.'s Thomas Circle. Who knows how many rabbits General George Henry Thomas (up on the bronze horse) has seen over the years — maybe just this one. And, by the way, I have no idea what she has in her left hand. Is that a teapot?

(Thanks to Steve Silberman for sending this to me)