Accessibility links
Picturing Polygamy In America : The Picture Show It makes sense that members of the Fundamentalist Church of Jesus Christ of Latter-Day Saints would be wary of photographers. But Stephanie Sinclair managed to photograph the insular group for a year and has this story.

With all the Big Love hubbub, it makes sense that members of the Fundamentalist Church of Jesus Christ of Latter-Day Saints (FLDS) would be wary of photographers. They are a polygamous offshoot of the Mormon church, or LDS, and have lately been a frequent subject of unfavorable news coverage.

But photographer Stephanie Sinclair, with the help of National Geographic, somehow convinced the insular FLDS to let her in with a camera — perhaps because the FLDS wanted to show that there's more to their religion than what you see on HBO. Sinclair spent more than a year documenting small communities in the American West and in Canada, and has this story in the February issue of National Geographic magazine. Hear Sinclair discussing her experiences on Talk of the Nation:

The fundamentalist group emerged in the early 20th century, after the Mormon church renounced polygamy under political pressures. A group of Mormons, wishing to sustain the original covenants of the church founders, broke off and moved away, continuing to practice plural marriage. Through the years, they have run into conflict with the law; most recently, FLDS leader Warren Jeffs was convicted of being an accomplice to rape, for arranging marriages with underage girls. 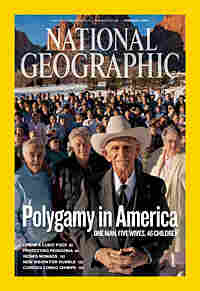 In a presentation at the National Geographic headquarters a few weeks ago, Sinclair mentioned her frustrations in pursuit of this photo project. She would go days without taking a photograph, only allowed to shoot in certain circumstances, under certain conditions — and even then, she wasn't always welcome. But the resulting photographs are unprecedented in how intimate a portrait they provide. Sinclair brings us one step closer to a culture that can be extremely elusive — and yet still completely American.

"To spend time in Hildale and Colorado City is to come away with a more nuanced view," writes Scott Anderson in the magazine article. This was also the gist of Sinclair's presentation: It's easy for outsiders to pass judgment, but the line between normal and abnormal becomes fuzzy when the faces become personal.

If you're in the D.C. area, she will be sharing more stories in an NG Live! event tonight, Feb. 17. You can also view more photos on VII Photo Agency's Web site, in a photo essay about young women in the FLDS.